In this paper, we deal with the inverse problem of the shape reconstruction of inclusions in elastic bodies. The main idea of this reconstruction is based on the monotonicity property of the Neumann-to-Dirichlet operator presented in a former article of the authors. Thus, we introduce the so-called standard as well as linearized monotonicity tests in order to detect and reconstruct inclusions. In addition, we compare these methods with each other and present several numerical test examples. 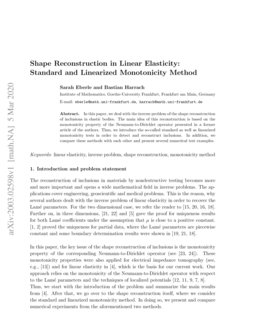 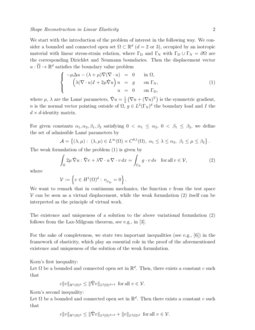 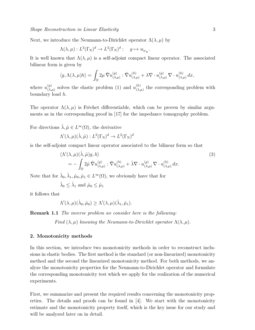 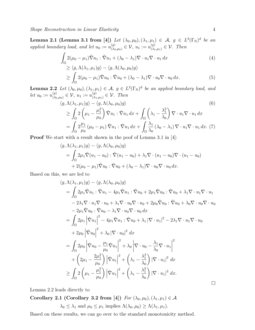 Shape-from-X is an important class of problems in the fields of geometry...
Davide Boscaini, et al. ∙

The ability to accurately reconstruct the 3D facets of a scene is one of...
Bipul Islam, et al. ∙

A nonlinear PPH-type reconstruction based on equilateral triangles

In this paper we introduce a new nonlinear reconstruction operator over ...
S. Amat, et al. ∙

The reconstruction of inclusions in materials by nondestructive testing becomes more and more important and opens a wide mathematical field in inverse problems. The applications cover engineering, geoscientific and medical problems. This is the reason, why several authors dealt with the inverse problem of linear elasticity in order to recover the Lamé parameters. For the two dimensional case, we refer the reader to [ikehata1990inversion, nakamura1993identification, imanuvilov2011reconstruction, lin2017boundary]. Further on, in three dimensions, [nakamura1995inverse, nakamura2003global] and [eskin2002inverse] gave the proof for uniqueness results for both Lamé coefficients under the assumption that μ is close to a positive constant. [beretta2014lipschitz, beretta2014uniqueness] proved the uniqueness for partial data, where the Lamé parameters are piecewise constant and some boundary determination results were shown in [nakamura1999layer, nakamura1995inverse, lin2017boundary]. In this paper, the key issue of the shape reconstruction of inclusions is the monotonicity property of the corresponding Neumann-to-Dirichlet operator (see [Tamburrino06, tamburrino2002new]). These monotonicity properties were also applied for electrical impedance tomography (see, e.g., [harrach2013monotonicity]) and for linear elasticity in [Eberle_Monotonicity], which is the basis for our current work. Our approach relies on the monotonicity of the Neumann-to-Dirichlet operator with respect to the Lamé parameters and the techniques of localized potentials [harrach2018helmholtz, harrach2018localizing, harrach2012simultaneous, gebauer2008localized, harrach2009uniqueness]. Thus, we start with the introduction of the problem and summarize the main results from [Eberle_Monotonicity]. After that, we go over to the shape reconstruction itself, where we consider the standard and linearized monotonicity method. In doing so, we present and compare numerical experiments from the aforementioned two methods. We start with the introduction of the problem of interest in the following way. We consider a bounded and connected open set Ω⊂Rd (d=2 or 3), occupied by an isotropic material with linear stress-strain relation, where ΓD and ΓN with ΓD∪ΓN=∂Ω

are the corresponding Dirichlet and Neumann boundaries. Then the displacement vector

where μ, λ are the Lamé parameters, ^∇u=12(∇u+(∇u)T) is the symmetric gradient, n is the normal vector pointing outside of Ω, g∈L2(ΓN)d the boundary load and I the d×d

The weak formulation of the problem (1) is given by

We want to remark that in continuum mechanics, the function v from the test space V can be seen as a virtual displacement, while the weak formulation (2) itself can be interpreted as the principle of virtual work. The existence and uniqueness of a solution to the above variational formulation (2) follows from the Lax-Milgram theorem, see e.g., in [Ciarlet]. For the sake of completeness, we state two important inequalities (see e.g., [Friedrichs]) in the framework of elasticity, which play an essential role in the proof of the aforementioned existence and uniqueness of the solution of the weak formulation. Korn’s first inequality: Let Ω be a bounded and connected open set in Rd. Then, there exists a constant c such that

Korn’s second inequality: Let Ω be a bounded and connected open set in Rd. Then there exists a constant c such that

It is well known that Λ(λ,μ) is a self-adjoint compact linear operator. The associated bilinear form is given by

where u(g)(λ,μ) solves the elastic problem (1) and u(h)(λ,μ) the corresponding problem with boundary load h. The operator Λ(λ,μ) is Frêchet differentiable, which can be proven by similar arguments as in the corresponding proof in [Lec07] for the impedance tomography problem. For directions ^λ,^μ∈L∞(Ω), the derivative

The inverse problem we consider here is the following:

Proof We start with a result shown in the poof of Lemma 3.1 in [Eberle_Monotonicity]:

Based on this, we are led to

Based on these results, we can go over to the standard monotonicity method.

Our aim is to prove that the opposite direction of Corollary 2.1 holds true in order to formulate the so-called standard monotonicity test (Corollary 2.2 and 2.3). Therefore, we consider the case where Ω contains inclusions in which the Lamé parameters λ and μ differ from otherwise known background Lamé parameters. For the precise formulation, we will now introduce the concept of the inner and the outer support of a measurable function in a similar way as in [harrach2013monotonicity].

A relatively open set U⊆¯¯¯¯Ω is called connected to ∂Ω if U∩Ω is connected and U∩∂Ω≠∅.

For a measurable function φ:Ω→R2, we define

For ease of notations, we assume that the background Lamé parameters are equal to (λ0,μ0). Further on, we consider φ=(λ−λ0,μ−μ0)T. Our goal is to determine the inclusion

from the knowledge of the Neumann-to-Dirichlet operator Λ(λ,μ). Hence, the inclusion in our nomenclature always contains the support of φ as well as all holes which cannot be connected to the boundary. Let us consider the setting (8) as depicted in Figure 1. By proving the opposite direction of Corollary 2.1, we show that D can be reconstructed by monotonicity tests, which simply compare Λ(λ,μ) (in the sense of quadratic forms) to the Neumann-to-Dirichlet operators Λ(λ1,μ1) of test parameters (λ1,μ1). To be more precise, the support of φ can be reconstructed under the assumption that supp(φ)⊂Ω has a connected complement, in which case we have supp(φ)=out∂Ωsupp(φ)=D (c.f. [harrach2013monotonicity]). Otherwise, what we can reconstruct is the support of φ together with all holes that have no connection to the boundary ∂Ω, i.e, D (c.f. [Factorization_Harrach_2013]). Hence, in this paper we only take a look at inclusions with supp(φ)=out∂Ωsupp(φ)=D. This leads to the formulation of the standard monotonicity test which is implemented in the next part. In the following, we define α and β as the contrasts and χD as well as χB

as the characteristic function w.r.t. the inclusion

D and the so-called test inclusion B, respectively.

We start with Lemma 2.2 and get

Hence, we get with Corollary 2.1 that

It remains to show that

Let B⊈D. Corollary 2.1 states that shrinking the open set B only makes Λ(λ0+αχB,μ0+βχB) larger, so that we can assume without loss of generality that B⊆Ω∖D. We can apply Theorem 3.3 from [Eberle_Monotonicity] and obtain a sequence (gn)n∈N⊂L2(ΓN)d so that the solutions (u(gn))n∈N⊂V, of

□ In addition, we state the theorem for the case λ≤λ0, μ≤μ0.

Proof The proof follows the lines of the proof of Theorem 2.1. □ Based on this, we introduce the monotonicity tests.

which leads directly to the following lemma.

Proof We take a look at the difference ΛD−ΛB=Λ(λ0+αχB,μ0+βχB)−Λ(λ,μ). The assumption αχB≤λ−λ0, βχB≤μ−μ0 leads via Theorem 2.1 directly to the desired results. □ Next, we go over to the consideration of noisy difference measurements

where δ>0 and formulate a monotonicity test (c.f. Corollary 2.2). We have to be aware of the fact that (18) will not hold in general for all B⊆D. Thus, we have to modify the testing in the following way.

Proof We base our considerations on Remark 3.5 from [harrach2013monotonicity] which deals with the handling of noisy data. Monotonicity tests for noisy difference measurements can be stably implemented in the following sense. Let

By replacing Λδ−ΛB by its symmetric part, e.g. by ((Λδ−ΛB)+(Λδ−ΛB)∗)/2, without loss of generality, we can assume that Λδ−ΛB is self-adjoint. Hence, we have for ΛD−ΛB≥0, that

for all boundary loads g∈L2(ΓN)d. Thus,

holds in the quadratic sense. If ΛD−ΛB≱0, then ΛD−Λ<span cl