We propose the general construction formula of shape-color primitives by using partial differentials of each color channel in this paper. By using all kinds of shape-color primitives, shape-color differential moment invariants can be constructed very easily, which are invariant to the shape affine and color affine transforms. 50 instances of SCDMIs are obtained finally. In experiments, several commonly used color descriptors and SCDMIs are used in image classification and retrieval of color images, respectively. By comparing the experimental results, we find that SCDMIs get better results. 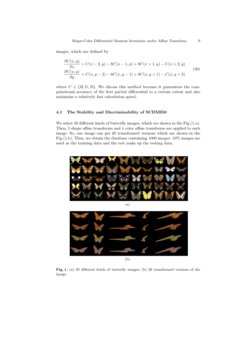 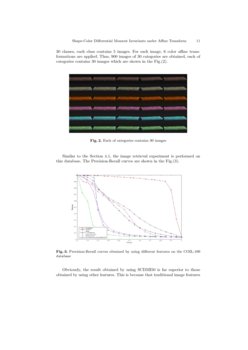 Image classification and retrieval for color images are two hotspots in pattern recognition. How to extract effective features, which are robust to color variations caused by the changes in the outdoor environment and geometric deformations caused by viewpoint changes, is the key issue. The classical approach is to construct invariant features for color images. Moment invariants are widely used invariant features.

Moment invariants were first proposed by Hu[1] in 1962. He defined geometric moments and constructed 7 geometric moment invariants which were invariant under the similarity transform(rotation, scale and translation). Researchers applied Hu moments to many fields of pattern recognition and achieved good results[2, 3]. Nearly 30 years later, Flusser et al.[4] constructed the affine moment invariants (AMIs) which are invariant under the affine transform. The geometric deformations of an object, which are caused by the viewpoint changes, can be represented by the projective transforms. However, general projective transforms are complex nonlinear transformations. So, it’s difficult to construct projective moment invariants. When the distance between the camera and the object is much larger than the size of the object itself, the geometric deformations can be approximated by the affine transform. AMIs have been used in many practical applications, such as character recognition[5] and expression recognition[6]. In order to obtain more AMIs, researchers designed all kinds of methods. Suk et al.[7] proposed graph method which can be used to construct AMIs of arbitrary orders and degrees. Xu et al.[8]

proposed moment invariants which were invariant under the shape affine transform and the color diagonal-offset transform. The invariants were constructed by using the related concepts of Lie group. Some complex partial differential equations had to be solved. Thus, the number of them was limited and difficult to be generalized. Also, Suk et al.

[11] put forward affine moment invariants for color images by combining all color channels. But this approach was not intuitive and did not work well for the color affine transform. To solve these problems, Gong et al.[12, 13, 14] constructed the color primitive by using the concept of geometric primitive proposed in [8]. Combining the color primitive with some shape primitives, moment invariants that are invariant under the shape affine and color affine transforms can be constructed easily, which were named shape-color affine moment invariants(SCAMIs). In [14], they obtained 25 SCAMIs which satisfied the independency of the functions. However, we find that a large number of SCAMIs with simple structures and good properties are missed in [14].

In this paper, we propose the general construction formula of shape-color primitives by using partial differentials of each color channel. Then, we use two kinds of shape-color primitives to construct shape-color differential moment invariants(SCDMIs), which are invariant under the shape affine and color affine transforms. We find that the construction formula of SCAMIs proposed in [14] is a special case of our method. Finally, commonly used image descriptors and SCDMIs are used for image classification and retrieval of color images, respectively. By comparing the experimental results, we find that SCDMIs proposed in this paper get better results.

In order to construct image features which are robust to color variations and geometric deformations, researchers have made various attempts. Among them, SCAMIs proposed in [14] are worthy of special attention. SCAMIs are invariant under the shape affine and color affine transforms. Two kinds of affine transforms are defined by

where SA and CA are nonsingular matrices.

For the color image I(R(x,y),G(x,y),B(x,y)), let (xp,yp),(xq,yq),(xr,yr) be three arbitrary points in the domain of I. The shape primitive and the color primitive are defined by

Similarly, the color core can be defined by

Further results can be concluded

Therefore, the SCAMIs are constructed by

Then there is a relation

It must be said that max{n,N}, maxi{di} and maxi{Di} are named the degree, the shape order and the color order of SCAMIs, respectively. In fact, Eq.(11) can be expressed as polynomial of shape-color moment. This moment was first proposed in [16] and defined by

Gong et al.[14] proposed that they constructed all SCAMIs of which degrees ⩽4, shape orders ⩽4 and color orders ⩽2. They obtained 24 SCAMIs which are functional independencies using the method proposed by Brown [17]. However, we will point out in the Section 3 that they omitted many simple and well-behaved SCAMIs.

3 The Construction Framework of SCDMIs

3.1 The Definition of The General Shape-Color Moment

Suppose the color image I(R(x,y),G(x,y),B(x,y)) have the k-order partial derivatives (k=0,1,2,...). The general shape-color differential moment is defined by

We can find that Eq.(14) and Eq.(13) are identical, when k=0. Therefore, the shape-color moment is a special case of the general shape-color differential moment.

3.2 The Construction of The General Shape-Color Primitive

3.3 The Construction of The General Shape-Color Core

Using Definition 2, the general shape-color core is defined by

Further, the following relation can be obtained

Then there is a relation

We can use Eq.(24) to construct instances of SCDMIs by setting different k values. However, color images are discrete data, the partial derivatives of each order can’t be accurately calculated. With the elevation of order, the error will be more and more, which will greatly affect the stability of SCDMIs. So, we set k=0,1 in this paper.

can be obtained. Therefore, we can construct the feature vector SCDMI50, which is defined by

The construction methods of 50 instances are shown in Table 1.