Several Separations Based on a Partial Boolean Function

We show a partial Boolean function f together with an input x∈ f^-1(*) such that both C_0̅(f,x) and C_1̅(f,x) are at least C(f)^2-o(1). Due to recent results by Ben-David, Göös, Jain, and Kothari, this result implies several other separations in query and communication complexity. For example, it gives a function f with C(f)=Ω(deg^2-o(1)(f)) where C and deg denote certificate complexity and polynomial degree of f. (This is the first improvement over a separation between C(f) and deg(f) by Kushilevitz and Nisan in 1995.) Other implications of this result are an improved separation between sensitivity and polynomial degree, a near-optimal lower bound on conondeterministic communication complexity for Clique vs. Independent Set problem and a near-optimal lower bound on complexity of Alon–Saks–Seymour problem in graph theory. 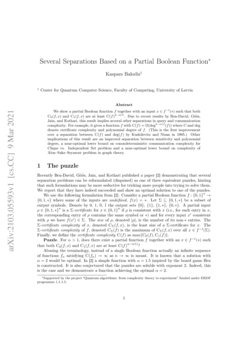 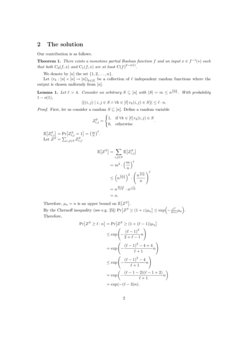 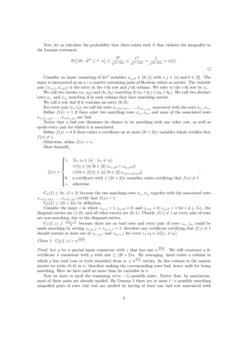 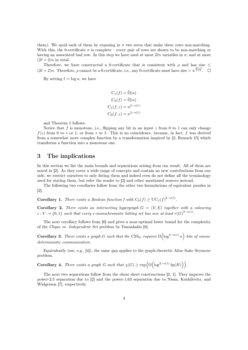 Recently Ben-David, Göös, Jain, and Kothari published a paper [ben2021unambiguous] demonstrating that several separation problems can be reformulated (disguised) as one of three equivalent puzzles, hinting that such formulations may be more seductive for tricking more people into trying to solve them. We report that they have indeed succeeded and show an optimal solution to one of the puzzles.

Puzzle. For α>1, does there exist a partial function f together with an such that both and are at least ?

Abusing the terminology, instead of a single Boolean function actually an infinite sequence of functions fn satisfying as n→∞ is meant. It is known that a solution with α=2 would be optimal. In [ben2021unambiguous] a simple function with α=1.5 inspired by the board game Hex is constructed. It is also conjectured that the puzzles are soluble with exponent 2. Indeed, this is the case and we demonstrate a function achieving the optimal α=2.

Our contribution is as follows.

There exists a monotone partial Boolean function f and an input such that both and are at least .

We denote by the set .

Let be a collection of ℓ independent random functions where the output is chosen uniformly from .

Let ℓ>4. Consider an arbitrary with

First, let us consider a random

Therefore, μu=n is an upper bound on .

Now, let us calculate the probability that there exists such S that violates the inequality in the Lemma statement.

Consider an input consisting of 2n2 variables with and . The input is interpreted as an n×n matrix containing pairs of Boolean values as entries. The variable pair is the entry in the i-th row and j-th column. We refer to the i-th row by xi.

We call a row bad if it contains an entry .

For every pair , we call the rows associated with the rows xi1,xi2.

Define if there exist two matching rows xi1,xi2, and none of the associated rows are bad.

Notice that a bad row dismisses its chance to be matching with any other row, as well as spoils every pair for which it is associated.

Define if there exists a certificate on at most variables which certifies that .

because the two matching rows xi1,xi2 together with the associated rows certify that .

because there are no bad rows and every pair of rows zi1,zi2 could be made matching by setting zi1,i2,1=zi2,i1,1=1, therefore any certificate certifying that should contain at least one of zi1,i2,1 and zi2,i1,1 for every .

Let ρ be a partial input consistent with z that has size n2ℓ+3ℓ+2. We will construct a 0-certificate σ consistent with ρ with size . By averaging, there exists a column in which ρ has read (one or both variables) from m≤nℓ+1ℓ+2 entries. In this column in the unseen entries we write in σ, therefore making the corresponding rows bad, hence unfit for being matching. Here we have used no more than 2n variables in σ.

Now we have to spoil the remaining possible pairs. Notice that, by association, most of these pairs are already spoiled. By Lemma 1 there are at most ℓ⋅n possibly matching unspoiled pairs of rows (the rest are spoiled by having at least one bad row associated with them). We spoil each of them by exposing in σ two zeros that make these rows non-matching. With this, the 0-certificate σ is complete – every pair of rows are shown to be non-matching or having an associated bad row. In this step we have used at most 2ℓn variables in σ, and at most in total.

By setting ℓ=logn, we have

Notice that f is monotone, i.e., flipping any bit in an input z from 0 to 1 can only change from 0 to ∗ or 1, or from ∗ to 1. This is no coincidence, because, in fact, f was derived from a somewhat more complex function by a transformation inspired by [ben2021unambiguous, Remark 15] which transforms a function into a monotone one.

In this section we list the main bounds and separations arising from our result. All of them are noted in [ben2021unambiguous]. As they cover a wide range of concepts and contain no new contributions from our side, we restrict ourselves to only listing them and indeed even do not define all the terminology used for stating them, but refer the reader to [ben2021unambiguous] and other mentioned sources instead.

The following two corollaries follow from the other two formulations of equivalent puzzles in [ben2021unambiguous].

There exists an intersecting hypergraph together with a colouring such that every c-monochromatic hitting set has size at least .

The next corollary follows from [goos2015lower] and gives a near-optimal lower bound for the complexity of the Clique vs. Independent Set problem by Yannakakis [yannakakis1991expressing].

There exists a graph G such that the \textscCISG requires bits of conondeterministic communication.

There exists a graph G such that .