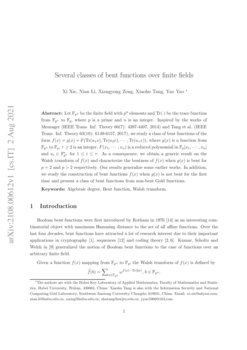 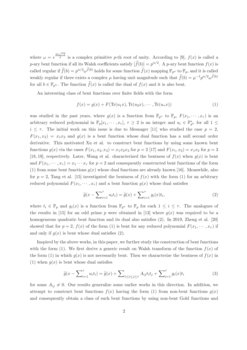 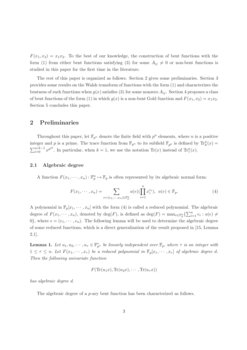 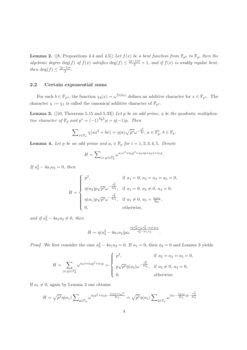 A note on constructions of bent functions

An Algebraic Construction Technique for Codes over Hurwitz Integers

Let α be a prime Hurwitz integer. Hα, which is the set of residual class...
Ramazan Duran, et al. ∙

Let n be an even positive integer, and m<n be one of its positive diviso...
Lijing Zheng, et al. ∙

A new class of negabent functions

Boolean bent functions were first introduced by Rothaus in 1976 [14] as an interesting combinatorial object with maximum Hamming distance to the set of all affine functions. Over the last four decades, bent functions have attracted a lot of research interest due to their important applications in cryptography [1], sequences [12] and coding theory [2, 6]. Kumar, Scholtz and Welch in [9] generalized the notion of Boolean bent functions to the case of functions over an arbitrary finite field.

Given a function f(x) mapping from Fpn to Fp, the Walsh transform of f(x) is defined by

was studied in the past years, where g(x) is a function from Fpn to Fp, F(x1,⋯,xτ) is an arbitrary reduced polynomial in Fp[x1,⋯,xτ], τ≥2 is an integer and ui∈F∗pn for all 1≤i≤τ. The initial work on this issue is due to Mesnager [11] who studied the case p=2, F(x1,x2)=x1x2 and g(x) is a bent function whose dual function has a null second order derivative. This motivated Xu et al. to construct bent functions by using some known bent functions g(x) via the cases F(x1,x2,x3)=x1x2x3 for p=2 [17] and F(x1,x2)=x1x2 for p=3 [18, 19], respectively. Later, Wang et al. characterized the bentness of f(x) when g(x) is bent and F(x1,⋯,xτ)=x1⋯xτ for p=2 and consequently constructed bent functions of the form (1) from some bent functions g(x) whose dual functions are already known [16]. Meanwhile, also for p=2, Tang et al. [15] investigated the bentness of f(x) with the form (1) for an arbitrary reduced polynomial F(x1,⋯,xτ) and a bent function g(x) whose dual satisfies

for an odd prime

Inspired by the above works, in this paper, we further study the construction of bent functions with the form (1). We first derive a generic result on Walsh transform of the function f(x) of the form (1) in which g(x) is not necessarily bent. Then we characterize the bentness of f(x) in (1) when g(x) is bent whose dual satisfies

The rest of this paper is organized as follows. Section 2 gives some preliminaries. Section 3 provides some results on the Walsh transform of functions with the form (1) and characterizes the bentness of such functions when g(x) satisfies (3) for some nonzero Aij. Section 4 proposes a class of bent functions of the form (1) in which g(x) is a non-bent Gold function and F(x1,x2)=x1x2. Section 5 concludes this paper.

Throughout this paper, let Fpn denote the finite field with pn elements, where n is a positive integer and p is a prime. The trace function from Fpn to its subfield Fpk is defined by Trnk(x)=∑n/k−1i=0xpik. In particular, when k=1, we use the notation Tr(x) instead of Trn1(x).

A function F(x1,⋯,xn):Fnp↦Fp is often represented by its algebraic normal form:

A polynomial in Fp[x1,⋯,xn] with the form (4) is called a reduced polynomial. The algebraic degree of F(x1,⋯,xn), denoted by deg(F), is defined as deg(F)=maxe∈Fnp{∑ni=1ei:a(e)≠0}, where e=(e1,⋯,en). The following lemma will be used to determine the algebraic degree of some reduced functions, which is a direct generalization of the result proposed in [15, Lemma 2.1].

Let u1,u2,⋯,uτ∈F∗pn be linearly independent over Fp, where τ is an integer with 1≤τ≤n. Let F(x1,⋯,xτ) be a reduced polynomial in Fp[x1,⋯,xτ] of algebraic degree d. Then the following univariate function

The algebraic degree of a p-ary bent function has been characterized as follows.

If a1≠0, again by Lemma 3 one obtains

In this subsection, we present some known results on the Walsh transform of Gold functions which will be used to construct bent functions f(x) of the form (1) from non-bent functions g(x) in Section 4.

3 Constructions of bent functions of the form (1)

In this section, we first derive a generic result on the Walsh transform of f(x) with the form (1) in which g(x) is not necessarily bent. Then, we characterize the bentness of f(x) in (1) for a bent function g(x) whose dual satisfies (3) with some Aij≠0 for p=2 and p>2 respectively.

The Walsh transform of a multivariate function F(x1,⋯,xn) over Fnp is

where (b1,⋯,bn)∈Fnp. Then the inverse Walsh transform of F(x1,⋯,xn) is given by

According to (6), for any b∈Fpn, one obtains

Note that Theorem 1 holds for an arbitrary prime p and g(x) is a function from Fpn to Fp which is not necessary to be bent. It generalizes some earlier works:

Then, we discuss (7) as the following two cases: