High throughput technologies have become the practice of choice for comparative studies in biomedical applications. Limited number of sample points due to sequencing cost or access to organisms of interest necessitates the development of efficient sample collections to maximize the power of downstream statistical analyses. We propose a method for sequentially choosing training samples under the Optimal Bayesian Classification framework. Specifically designed for RNA sequencing count data, the proposed method takes advantage of efficient Gibbs sampling procedure with closed-form updates. Our results shows enhanced classification accuracy, when compared to random sampling. 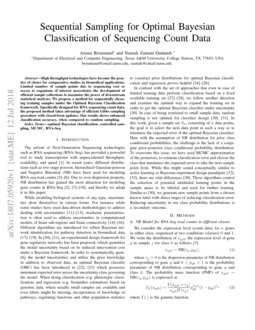 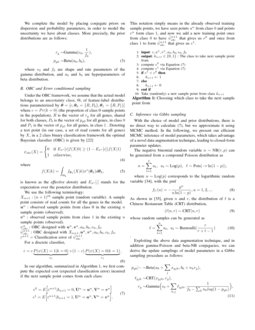 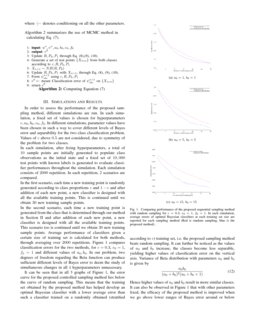 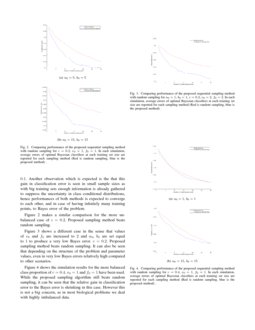 The advent of Next-Generation Sequencing technologies such as RNA sequencing (RNA-Seq), has provided a powerful tool to study transcriptome with unprecedented throughput, scalability, and speed [1]. In recent years, different distributions such as two stage poisson, hierarchical Gaussian-poisson and Negative Binomial (NB) have been used for modeling RNA-seq read counts [4, 2, 5, 3, 6]. Due to over-dispersion property, NB distribution has gained the most attraction for modeling gene counts in RNA-Seq [2, 10, 8, 7, 9], and thereby we adopt it in this paper.

While modeling biological systems of any type, uncertainties show themselves in various forms. For instance while some studies have used data-driven methodologies to address dealing with uncertainties [11, 12, 13], stochastic parametrization is often used to address uncertainties in computational models of brain sub-regions and brain connectivity[14, 15, 16]

[17, 18, 19]. In [20, 21], an experimental design framework for gene regulatory networks has been proposed, which quantifies the model uncertainty based on its induced intervention cost under a Bayesian framework. In order to systematically quantify the model uncertainties and utilize the prior knowledge in addition to observed data, an optimal Bayesian classifer (OBC) has been introduced in [22, 23]

which possesses minimum expected error across the uncertainty class governing the model. When doing classification (e.g. phenotypic classification) and regression (e.g. biomarker estimation) based on genomic data, where usually small samples are available and even labels might be missing, incorporation of knowledge of pathways, regulating functions and other population statistics to construct prior distributions for optimal Bayesian classification and regression proves helpful

In contrast with the set of approaches that even in case of limited training data perform classification based on a fixed available training set [27, 28, 29]

, we follow another direction and examine the optimal way to expand the training set in order to get the optimal Bayesian classifier under uncertainty

[30]. In case of being restricted to small sample data, random sampling is not optimal for classifier design [30, 31]. In this work, given a sample set Sn, consisting of n

data points, the goal is to select the next data point in such a way as to minimize the expected error of the optimal Bayesian classifier. Here with the assumption of NB distribution for prior class conditional probabilities, the challenge is the lack of a conjugate prior-posterior class conditional probability distribution. To overcome this issue, we have used MCMC approximation of the posteriors, to estimate classification error and choose the class that minimizes the expected error, to take the next sample point from. While this might sound conceptually similar to active learning or Bayesian experiment design paradigms

[32, 33], there are vital differences [30]. Those algorithms control the selection of potential unlabeled training points in the sample space to be labeled and used for further training. Similar to [30], we generate new sample points from a chosen known label with direct target of reducing classification error. Reducing uncertainty in our class probability distributions is a secondary outcome.

where Γ(⋅) is the gamma function.

We complete the model by placing conjugate priors on dispersion and probability parameters, in order to model the uncertainty we have about classes. More precisely, the prior distributions are as follows:

are shape and rate parameters of the gamma distribution, and

are hyperparameters of beta distribution.

Under the OBC framework, we assume that the actual model belongs to an uncertainty class, Θ, of feature-label distributions parameterized by θ=[c,θ0={R,P0},θ1={R,P1}] where c=Pr(k=0) (the proportion of class 0 sample points in the population), R

is the vector of

is known as the effective density and Eπ∗[.] stands for the expectation over the posterior distribution.

We use the following terminology: Xn+1:(n+1)th

sample point (random variable). A sample point consists of read counts for all the genes in the model.


For a discrete classifier,

In our algorithm, summarized in Algorithm 1, we first compute the expected cost (expected classification error) incurred if the next sample point comes from each class:

With the choice of model and prior distributions, there is no direct way to calculate (7), but we approximate it using MCMC method. In the following, we present our efficient MCMC inference of model parameters, which takes advantage of a novel data augmentation technique, leading to closed-form parameter updates.

can be generated from a compound Poisson distribution as

where u∼Log(p) corresponds to the logarithmic random variable [34], with the pmf

As shown in [35], given n and r, the distribution of ℓ is a Chinese Restaurant Table (CRT) distribution,

whose random samples can be generated as

Exploiting the above data augmentation technique, and in addition gamma-Poisson and beta-NB conjugacies, we can derive the update samplings of model parameters in a Gibbs sampling procedure as follows:

where ⋅|− denotes conditioning on all the other parameters.

. In our problem, two degrees of freedom regarding the Beta function can produce sufficient different levels of Bayes error to deem the study of simultaneous changes in all

It can be seen that in all 3 graphs of Figure 1, the error curve for the proposed controlled sampling method lies below the curve of random sampling. This means that the training set obtained by the proposed method has helped develop an optimal Bayesian classifier with a lower average error than such a classifier trained on a randomly obtained (stratified according to c) training set, i.e. the proposed sampling method beats random sampling. It can further be noticed as the values of a0 and b0

Hence higher values of a0 and b0 result in more similar classes. It can also be observed in Figure 1 that with other parameters fixed, the efficacy of the proposed method is improved when we go above lower ranges of Bayes error around or below 0.1. Another observation which is expected is the that this gain in classification error is seen in small sample sizes as with big training sets enough information is already gathered to suppress the uncertainty in class conditional distributions, hence performances of both methods is expected to converge to each other, and in case of having infinitely many training points, to Bayes error of the problem.

Figure 3 shows a different case in the sense that values of e0 and f0 are increased to 2 and a0, b0 are set equal to 1 to produce a very low Bayes error. c=0.2. Proposed sampling method beats random sampling. It can also be seen that depending on the structure of the problem and parameter values, even in very low Bayes errors relatively high compared to other scenarios.

Figure 4 shows the simulation results for the more balanced class proportion of c=0.4. e0=1 and f0=1 have been used. While the proposed sampling algorithm still beats random sampling, it can be seen that the relative gain in classification error to the Bayes error is shrinking in this case. However this is not a big concern, as in most biological problems we deal with highly imbalanced data.

This study has further expanded the results of [30]

, showing how to utilize the prior knowledge about classes to form training sets for classifiers more efficiently than random sampling, for negative binomial distributions which are used in modeling of RNA-Seq read counts. The method is described mathematically and its performance is theoretically studied using MCMC simulations on synthetic data. While efficiency of the proposed method seems to show a positive correlation with Bayes error, it is a function of all model parameters and hence can vary at the same levels of Bayes error. Future works can include expansion of this sampling method to the hierarchical Gaussian-Poisson framework introduced in