One of the goals in scaling sequential machine learning methods pertains to dealing with high-dimensional data spaces. A key related challenge is that many methods heavily depend on obtaining the inverse covariance matrix of the data. It is well known that covariance matrix estimation is problematic when the number of observations is relatively small compared to the number of variables. A common way to tackle this problem is through the use of a shrinkage estimator that offers a compromise between the sample covariance matrix and a well-conditioned matrix, with the aim of minimizing the mean-squared error. We derived sequential update rules to approximate the inverse shrinkage estimator of the covariance matrix. The approach paves the way for improved large-scale machine learning methods that involve sequential updates. 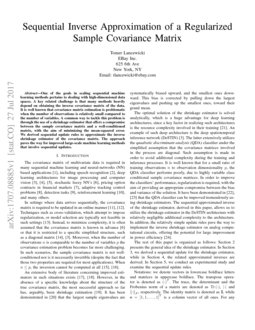 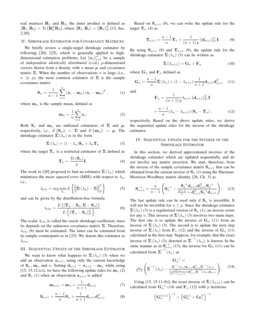 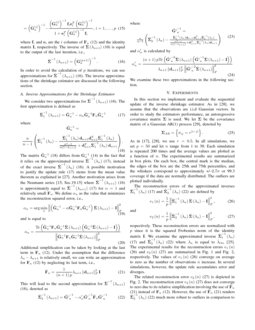 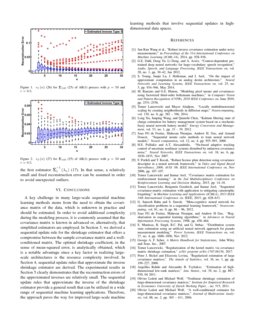 Regularization of the Kernel Matrix via Covariance Matrix Shrinkage Estimation

Efficiently updating a covariance matrix and its LDL decomposition

When shrinking a covariance matrix towards (a multiple) of the identity ...
Ansgar Steland, et al. ∙

The Stein paradox has played an influential role in the field of high di...
Alex Shkolnik, et al. ∙

In settings where data arrives sequentially, the covariance matrix is required to be updated in an online manner [11, 12]. Techniques such as cross-validation, which attempt to impose regularization, or model selection are typically not feasible in such settings [13]. Instead, to minimize complexity, it is often assumed that the covariance matrix is known in advance [6] or that it is restricted to a specific simplified structure, such as a diagonal matrix [14, 3]. Moreover, when the number of observations n is comparable to the number of variables p the covariance estimation problem becomes far more challenging. In such scenarios, the sample covariance matrix is not well-conditioned nor is it necessarily invertible (despite the fact that those two properties are required for most applications). When n≤p, the inversion cannot be computed at all [15, 16].

An extensive body of literature concerning improved estimators in such situations exists [17, 18]. However, in the absence of a specific knowledge about the structure of the true covariance matrix, the most successful approach so far has, arguably, been shrinkage estimation [19]. It has been demonstrated in [20]

The optimal solution of the shrinkage estimator is solved analytically, which is a huge advantage for deep learning architectures, since a key factor in realizing such architectures is the resource complexity involved in their training [21]. An example of such deep architecture is the deep spatiotemporal inference network (DeSTIN) [3]. The latter extensively utilizes the quadratic discriminant analysis

(QDA) classifier under the simplified assumption that the covariance matrices involved in the process are diagonal. Such assumption is made in order to avoid additional complexity during the training and inference processes. It is well known that for a small ratio of training observations

, the QDA classifier performs poorly, due to highly variable class conditional sample covariance matrices. In order to improve the classifiers’ performance, regularization is required, with the aim of providing an appropriate compromise between the bias and variance of the solution. It have been demonstrated in

Notations: we denote vectors in lowercase boldface letters and matrices in uppercase boldface. The transpose operator is denoted as

, respectively. The identity matrix is denoted as

We briefly review a single-target shrinkage estimator by following [20, 25], which is generally applied to high-dimensional estimation problems. Let {xi}ni=1 be a sample of independent identically distributed (i.i.d.) p-dimensional vectors drawn from a density with a mean μ and covariance matrix Σ. When the number of observations n is large (i.e., n≫p), the most common estimator of Σ is the sample covariance matrix

where mn is the sample mean, defined as

Both Sn and mn

are unbiased estimators of

The work in [20] proposed to find an estimator ^Σ(λn) which minimizes the mean squared error (MSE) with respect to λn, i.e.,

and can be given by the distribution-free formula

The scalar λOn is called the oracle shrinkage coefficient, since its depends on the unknown covariance matrix Σ. Therefore, λOn (6) must be estimated. The latter can be estimated from its sample counterparts as in [25]. We denote this estimator as ^λOn.

where Gn and Fn defined as

respectively. Based on the above update rules, we derive the sequential update rules for the inverse of the shrinkage estimator.

Iv Sequential Update for the Inverse of the Shrinkage Estimator

In this section, we derived approximated inverses of the shrinkage estimator which are updated sequentially and do not involve any matrix inversion. We start, therefore, from the inverse of the sample covariance matrix Sn+1 that can be obtained from the current inverse of Sn (1) using the Sherman-Morrison-Woodbury matrix identity [26, Ch. 3] as

In order to avoid the calculation of p iterations, we can use approximations for ^Σ−1(λn+1) (16). The inverse approximations of the shrinkage estimator are discussed in the following section.

and is equal to

Additional simplification can be taken by looking at the last term in Fn (12). Under the assumption that the difference λn−λn+1 is relatively small, we can write an approximation for Fn (12) by neglecting its last term, i.e.,

and α′n is calculated by

We examine these two approximations in the following section.

In this section we implement and evaluate the sequential update of the inverse shrinkage estimator. As in [28], we assume that the observations are i.i.d Gaussian vectors. In order to study the estimators performance, an autoregressive covariance matrix Σ is used. We let Σ be the covariance matrix of a Gaussian AR(1) process [29], denoted by

As in [17, 28], we use r=0.5. In all simulations, we set p=50 and let n range from 1 to 30. Each simulation is repeated 200 times and the average values are plotted as a function of n. The experimental results are summarized in box plots. On each box, the central mark is the median, the edges of the box are the 25th and 75th percentiles, and the whiskers correspond to approximately +/–2.7σ

or 99.3 coverage if the data are normally distributed. The outliers are plotted individually.

respectively. These reconstruction errors are normalized with p since it is the squared Frobenius norm of the identity matrix I. We examine the approximated inverse ~Σ−11(λn) (17) and ~Σ−12(λn) (22) where λn is equal to ^λOn [25]. The experimental results for the reconstruction errors e1(n) (26) and e2(n) (27) are summarized in Fig. 1 and Fig. 2, respectively. The values of e1(n) (26) converge on average to zero as the number of observations n increase. In several simulations, however, the update rule accumulates error and diverges.

A key challenge in many large-scale sequential machine learning methods stems from the need to obtain the covariance matrix of the data, which is unknown in practice and should be estimated. In order to avoid additional complexity during the modeling process, it is commonly assumed that the covariance matrix is known in advanced or, alternatively, that simplified estimators are employed. In Section 3, we derived a sequential update rule for the shrinkage estimator that offers a compromise between the sample covariance matrix and a well-conditioned matrix. The optimal shrinkage coefficient, in the sense of mean-squared error, is analytically obtained, which is a notable advantage since a key factor in realizing large-scale architectures is the resource complexity involved. In Section 4, sequential update rules that approximate the inverse shrinkage estimator are derived. The experimental results in Section 5 clearly demonstrates that the reconstruction errors of the approximated inverses are relatively small. The sequential update rules that approximate the inverse of the shrinkage estimator provide a general result that can be utilized in a wide range of sequential machine learning applications. Therefore, the approach paves the way for improved large-scale machine learning methods that involve sequential updates in high-dimensional data spaces.