The Pursley-Sarwate criterion of a pair of finite complex-valued sequences measures the collective smallness of the aperiodic autocorrelations and the aperiodic crosscorrelations of the two sequences. It is known that this quantity is always at least 1 with equality if and only if the sequence pair is a Golay pair. We exhibit pairs of complex-valued sequences whose entries have unit magnitude for which the Pursley-Sarwate criterion tends to 1 as the sequence length tends to infinity. Our constructions use different carefully chosen Chu sequences. 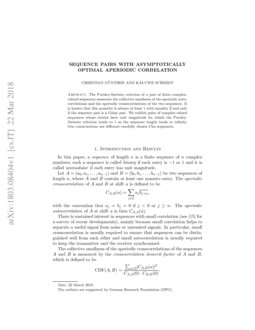 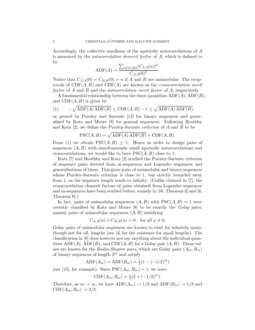 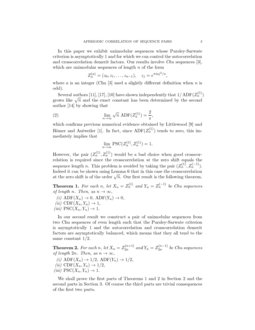 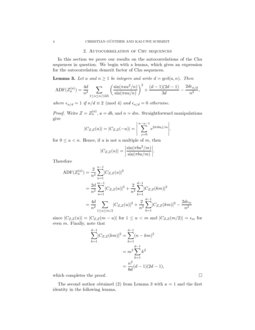 We provide a complete enumeration of all complex Golay pairs of length u...
Curtis Bright, et al. ∙

In this article, we study the pointwise asymptotic behavior of iterated ...
Lucas Coeuret, et al. ∙

M. Levin defined a real number x that satisfies that the sequence of the...
Verónica Becher, et al. ∙

Let A=(a0,a1,…,an−1) and B=(b0,b1,…,bn−1) be two sequences of length n, where A und B contain at least one nonzero entry. The aperiodic crosscorrelation of A and B at shift u is defined to be

with the convention that aj=bj=0 if j<0 or j≥n. The aperiodic autocorrelation of A at shift u is then CA,A(u).

The collective smallness of the aperiodic crosscorrelations of the sequences A and B is measured by the crosscorrelation demerit factor of A and B, which is defined to be

Accordingly, the collective smallness of the aperiodic autocorrelations of A is measured by the autocorrelation demerit factor of A, which is defined to be

as proved by Pursley and Sarwate [13] for binary sequences and generalised by Katz and Moore [8] for general sequences. Following Boothby and Katz [2], we define the Pursley-Sarwate criterion of A and B to be

From (1) we obtain PSC(A,B)≥1. Hence in order to design pairs of sequences (A,B) with simultaneously small aperiodic autocorrelations and crosscorrelations, we would like to have PSC(A,B) close to 1.

Katz [7] and Boothby and Katz [2] studied the Pursley-Sarwate criterion of sequence pairs derived from m-sequences and Legendre sequences and generalisations of them. This gives pairs of unimodular and binary sequences whose Pursley-Sarwate criterion is close to 1, but strictly bounded away from 1, as the sequence length tends to infinity. (Unlike claimed in [7], the crosscorrelation demerit factors of pairs obtained from Legendre sequences and m-sequences have been studied before, namely in [16, Theorem 3] and [6, Theorem 9].)

In fact, pairs of unimodular sequences (A,B) with PSC(A,B)=1

were recently classified by Katz and Moore

[8] to be exactly the Golay pairs, namely pairs of unimodular sequences (A,B) satisfying

Golay pairs of unimodular sequences are known to exist for infinitely many, though not for all, lengths (see [4] for the existence for small lengths). The classification in [8] does however not say anything about the individual quantities ADF(A), ADF(B), and CDF(A,B) for a Golay pair (A,B). These values are known for the Rudin-Shapiro pairs, which are Golay pairs (Am,Bm) of binary sequences of length 2m and satisfy

which confirms previous numerical evidence obtained by Littlewood [9] and Bömer and Antweiler [1]. In fact, since ADF(Z(1)n) tends to zero, this immediately implies that

In our second result we construct a pair of unimodular sequences from two Chu sequences of even length such that the Pursley-Sarwate criterion is asymptotically 1 and the autocorrelation and crosscorrelation demerit factors are asymptotically balanced, which means that they all tend to the same constant 1/2.

We shall prove the first parts of Theorems 1 and 2 in Section 2 and the second parts in Section 3. Of course the third parts are trivial consequences of the first two parts.

The second author obtained (2) from Lemma 3 with a=1 and the first identity in the following lemma.

From Lemmas 3 and 4 we also obtain

We distinguish the cases that n runs through the set of even and odd positive integers. First we show that

It is readily verified that the aperiodic autocorrelations of X2m and Y2m have equal magnitudes at all shifts, so that it is sufficient to establish that ADF(X2m)→2. Noting that 2m+1 is coprime to 4m and using trigonometric addition formulas, Lemma 3 with n=4m and a=2m+1 shows that 4m2ADF(X2m) equals

from which it follows that

Next we prove that

For even k, we have

An asymptotic expansion of these sums was obtained by Paris [12]

using an asymptotic expansion of the error function. We deduce an estimate for generalised Gauss sums from this expansion. To state the result, define for real

where, for complex z,

is the complementary error function and the integral is over any path from 0 to z.

Fiedler, Jurkat, and Körner [5] obtained the following estimate from a slightly weaker version of Proposition 5.

where the implicit constant is absolute.

From Proposition 5 we can also deduce the following result, which will be the key ingredient to our proofs of Theorem 1 and 2.

where the implicit constant is absolute.

Throughout the proof, all implicit constants are absolute. We first prove the desired bound when u is in the set (7). This is an application of Proposition 5 with N=m−u, x=2/m, θ=u/m, so that M=2 and ϵ=−u/m and μ=1. We have

Now use the identity

we then find from Proposition 5 that

We conclude by proving the second parts of Theorems 1 and 2.

Since the first and the last term in the sum are both equal to 1, we find that