We investigate the feasibility of sequence-level knowledge distillation of Sequence-to-Sequence (Seq2Seq) models for Large Vocabulary Continuous Speech Recognition (LVSCR). We first use a pre-trained larger teacher model to generate multiple hypotheses per utterance with beam search. With the same input, we then train the student model using these hypotheses generated from the teacher as pseudo labels in place of the original ground truth labels. We evaluate our proposed method using Wall Street Journal (WSJ) corpus. It achieved up to 9.8 × parameter reduction with accuracy loss of up to 7.0% word-error rate (WER) increase 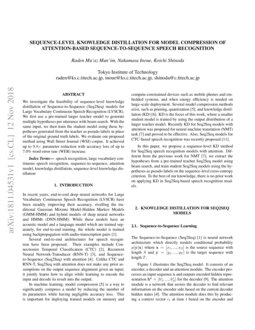 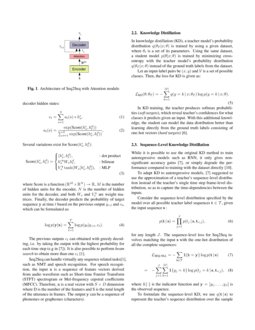 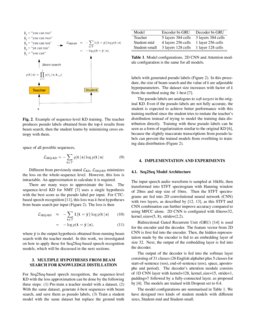 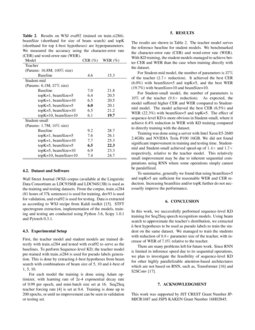 In recent years, end-to-end deep neural networks for Large Vocabulary Continuous Speech Recognition (LVSCR) have been steadily improving their accuracy, rivalling the traditional Gaussian Mixture Model-Hidden Markov Models (GMM-HMM) and hybrid models of deep neural networks and HMMs (DNN-HMM). While these models have an acoustic model and a language model which are trained separately, for end-to-end training, the whole model is trained using backpropagation with audio-transcription pairs

Several end-to-end architectures for speech recognition have been proposed. Their examples include Connectionist Temporal Classification (CTC) [2]

[3], and Sequence-to-Sequence (Seq2Seq) with attention [4]. Unlike CTC and RNN-T, Seq2Seq with attention does not make any prior assumptions on the output sequence alignment given an input; it jointly learns how to align while learning to encode the input and decode its result into the output.

[5] is a way to significantly compress a model by reducing the number of its parameters while having negligible accuracy loss. This is important for deploying trained models on memory and compute-constrained devices such as mobile phones and embedded systems, and when energy efficiency is needed on large-scale deployment. Several model compression methods exist, such as pruning, quantization [5], and knowledge distillation (KD) [6]

. KD is the focus of this work, where a smaller student model is trained by using the output distribution of a larger teacher model. Recently KD for Seq2Seq models with attention was proposed for neural machine translation (NMT) task

[7] and proved to be effective. Also, Seq2Seq models for CTC-based speech recognition was recently proposed [11].

In this paper, we propose a sequence-level KD method for Seq2Seq speech recognition models with attention. Different from the previous work for NMT [7], we extract the hypotheses from a pre-trained teacher Seq2Seq model using beam search, and train student Seq2Seq models using the hypotheses as pseudo labels on the sequence-level cross-entropy criterion. To the best of our knowledge, there is no prior work on applying KD in Seq2Seq-based speech recognition models.

Figure 1 illustrates the Seq2Seq model. It consists of an encoder, a decoder and an attention module. The encoder processes an input sequence x

he=[he1,...,heS] for the decoder [9]. The attention module is a network that assists the decoder to find relevant information on the encoder side based on the current decoder hidden states [4]

. The attention module does this by producing a context vector

ct at time t based on the encoder and decoder hidden states:

The previous outputs ct can obtained with greedy decoding, i.e. by taking the output with the highest probability for each time step (e.g in [7]). It is also possible to perform beam search to obtain more than one ct [1].

is a sequence of feature vectors derived from audio waveform such as Short-time Fourier Transform (STFT) spectrogram or Mel-frequency cepstral coefficients (MFCC). Therefore,

x is a real vector with S×D dimension where D is the number of the features and S is the total length of the utterance in frames. The output y can be a sequence of phonemes or graphemes (characters).

Let an input-label pairs be (x,y) and V is a set of possible classes. Then, the loss for KD is given as:

In KD training, the teacher produces softmax probabilities (soft targets), which reveal teacher’s confidences for what classes it predicts given an input. With this additional knowledge, the student can model the data distribution better than learning directly from the ground truth labels consisting of one-hot vectors (hard targets) [6].

While it is possible to use the original KD method to train autoregressive models such as RNN, it only gives non-significant accuracy gains

[7], or simply degrade the performance compared to training with the dataset directly [10].

Consider the sequence-level distribution specified by the model over all possible teacher label sequences t∈T, given the input sequence s :

for any length J. The sequence-level loss for Seq2Seq involves matching the input s with the one-hot distribution of all the complete sequences:

where 1{⋅} is the indicator function and y=[y1,…,yJ] is the observed sequence.

To formulate the sequence-level KD, we use q(t|s) to represent the teacher’s sequence distribution over the sample space of all possible sequences,

Different from previously stated LKD, LSEQ-KD minimizes the loss on the whole-sequence level. However, this loss is intractable. An approximation to calculate it is required.

There are many ways to approximate the loss. The sequence-level KD for NMT [7] uses a single hypothesis with the best score as the pseudo label per input. For CTC-based speech recognition [11], this loss was k-best hypotheses from beam search per input (Figure 2). The loss is then

where ^y is the output hypothesis obtained from running beam search with the teacher model. In this work, we investigated on how to apply these for Seq2Seq-based speech recognition models, which will be discussed in the next sections.

For Seq2Seq-based speech recognition, the sequence-level KD with the loss approximation can be done by the following three steps: (1) Pre-train a teacher model with a dataset, (2) With the same dataset, generate k-best sequences with beam search, and save them as pseudo labels, (3) Train a student model with the same dataset but replace the ground truth labels with generated pseudo labels (Figure 2). In this procedure, the size of beam search and the value of k

are adjustable hyperparameters. The dataset size increases with factor of

The input speech audio waveform is sampled at 16kHz, then transformed into STFT spectrogram with Hanning window of 20ms and step size of 10ms. Then the STFT spectrograms are fed into 2D convolutional neural network (CNN) with two layers, as described by

, as this STFT and CNN combination can further improve accuracy compared to using MFCC alone. 2D CNN is configured with filters=32, kernel_size=(5, 8), stride=(2,2).

The output of the decoder is fed into the softmax layer consisting of 31 classes (26 English alphabet plus 5 classes for start-of-sentence (sos), end-of-sentence (eos), space, apostrophe and period). The decoder’s attention module consists of 1D CNN layer with kernel=128, kernel_size=15, stride=1, padding=7 followed by a fully-connected layer, as proposed by

The model configurations are summarised in Table 1. We have designed two kinds of student models with different sizes, Student-mid and Student-small.

Wall Street Journal (WSJ) corpus (available at the Linguistic Data Consortium as LDC93S6B and LDC94S13B) is used as the training and testing datasets. From the corpus, train_si284 (81 hours of 37k sentences) is used for training, dev93 is used for validation, and eval92 is used for testing. Data is extracted as according to WSJ recipe from Kaldi toolkit [15]

First, the teacher model and student models are trained directly with train_si284 and tested with eval92 to serve as the baselines. To perform Sequence-level KD, the teacher model pre-trained with train_si284 is used for pseudo labels generation. This is done by extracting k-best hypotheses from beam search with combinations of beam size of 5, 10 and k-best of 1, 5, 10.

For each model the training is done using Adam optimizer, with learning rate of 2e-4 exponential decay rate of 0.99 per epoch, and mini-batch size set at 16. Seq2Seq teacher forcing rate

[4] is set at 0.4. Training is done up to 200 epochs, or until no improvement can be seen in validation or testing set.

The results are shown in Table 2. The teacher model serves the reference baseline for student models. We benchmarked the character-error rate (CER) and word-error rate (WER). With KD training, the student models managed to achieve better CER and WER than the case when training directly with the dataset.

For Student-small model, the number of parameters is 10% of the teacher (9.8× reduction). As expected, the model suffered higher CER and WER compared to Student-mid model. The model achieved the best CER (6.5%) and WER (22.3%) with beamSize=5 and topK=5. The effect of sequence-level KD is more obvious in Student-small, where it achieve 6.4% reduction in WER with KD training compared to directly training with the dataset.

Training was done using a server with Intel Xeon E5-2680 2.4GHz and NVIDIA Tesla P100 16GB. We did not found significant improvement in training and testing time. Student-mid and Student-small achieved speed-up of 1.4× and 1.7× respectively, relative to the teacher model. This relatively small improvement may be due to inherent sequential computations using RNN where some operations simply cannot be paralellized.

To summarise, generally we found that using beamSize=5 and topK=5 are sufficient for reasonable WER and CER reduction. Increasing beamSize and/or topK further do not necessarily improve the performance.

In this work, we successfully performed sequence-level KD training for Seq2Seq speech recognition models. Using beam search to approximate the teacher’s distribution, we extracted k-best hypotheses to be used as pseudo labels to train the student on the same dataset. We managed to train the students with reduction of 9.8× parameter size of the teacher, with increase of WER of 7.0% relative to the teacher.

There are many problems left for future work. Since RNN is limited in inference speed due to its sequential operations, we plan to investigate the feasibility of sequence-level KD for other highly parallelizable attention-based architectures which are not based on RNN, such as, Transformer [16] and S2SConv [17].