Video object detection is challenging because objects that are easily detected in one frame may be difficult to detect in another frame within the same clip. Recently, there have been major advances for doing object detection in a single image. These methods typically contain three phases: (i) object proposal generation (ii) object classification and (iii) post-processing. We propose a modification of the post-processing phase that uses high-scoring object detections from nearby frames to boost scores of weaker detections within the same clip. We show that our method obtains superior results to state-of-the-art single image object detection techniques. Our method placed 3rd in the video object detection (VID) task of the ImageNet Large Scale Visual Recognition Challenge 2015 (ILSVRC2015). 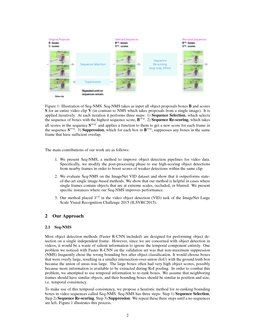 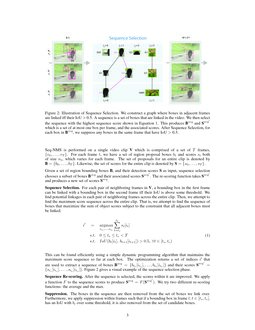 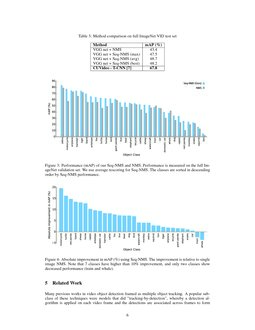 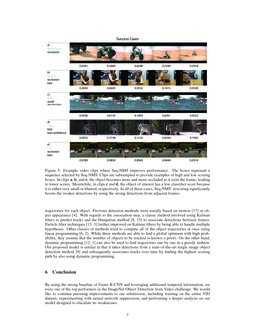 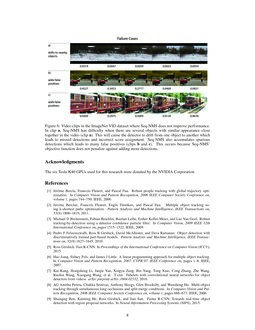 Single image object detection has experienced large performance gains in the last few years. Video object detection, on the other hand, still remains an open problem. This is mainly because objects that are easily detected in one frame may be difficult to detect in another frame within the same video clip. There are many reasons that may cause this difficulty. Some examples include: (i) drastic scale changes (ii) occlusion and (iii) motion blur. In this work we propose a simple extension of single image object detection to help overcome these difficulties.

learns to generate proposals using a neural network. The candidate regions are then assigned a class score in the object classification phase, and redundant detections are subsequently filtered in the post-processing phase.

While effective, single image methods are naïve because they completely ignore the temporal dimension. In this work, we incorporate temporal information during the post-processing phase in order to refine the detections within each individual frame. Given a video sequence of region proposals and their corresponding class scores, our method associates bounding boxes in adjacent frames using a simple overlap criterion. It then selects boxes to maximize a sequence score. Those boxes are then used suppress overlapping boxes in their respective frames and are subsequently rescored in order to boost weaker detections.

The main contributions of our work are as follows:

Most object detection methods (Faster R-CNN included) are designed for performing object detection on a single independent frame. However, since we are concerned with object detection in videos, it would be a waste of salient information to ignore the temporal component entirely. One problem we noticed with Faster R-CNN on the validation set was that non-maximum suppression (NMS) frequently chose the wrong bounding box after object classification. It would choose boxes that were overly large, resulting in a smaller intersection-over-union (IoU) with the ground truth box because the union of areas was large. The large boxes often had very high object scores, possibly because more information is available to be extracted during RoI pooling. In order to combat this problem, we attempted to use temporal information to re-rank boxes. We assume that neighboring frames should have similar objects, and their bounding boxes should be similar in position and size, i.e. temporal consistency.

To make use of this temporal consistency, we propose a heuristic method for re-ranking bounding boxes in video sequences called Seq-NMS. Seq-NMS has three steps: Step 1)

Sequence Selection, Step 2) Sequence Re-scoring, Step 3) Suppression. We repeat these three steps until a no sequences are left. Figure 1 illustrates this process.

Given a set of region bounding boxes B, and their detection scores S as input, sequence selection chooses a subset of boxes Bseq and their associated scores Sseq′. The re-scoring function takes Sseq′ and produces a new set of scores Sseq.

Sequence Selection. For each pair of neighboring frames in V, a bounding box in the first frame can be linked with a bounding box in the second frame iff their IoU is above some threshold. We find potential linkages in each pair of neighboring frames across the entire clip. Then, we attempt to find the maximum score sequence across the entire clip. That is, we attempt to find the sequence of boxes that maximize the sum of object scores subject to the constraint that all adjacent boxes must be linked.

This can be found efficiently using a simple dynamic programming algorithm that maintains the maximum score sequence so far at each box. The optimization returns a set of indices i′ that are used to extract a sequence of boxes Bseq={bts[its],…,bte[ite]} and their scores Sseq′={sts[its],…,ste[ite]}. Figure 2 gives a visual example of the sequence selection phase.

Sequence Re-scoring. After the sequence is selected, the scores within it are improved. We apply a function F to the sequence scores to produce Sseq=F(Sseq′). We try two different re-scoring functions: the average and the max.

For the 2015 iteration, the ImageNet competition contained a new taster competition for object detection from video called the ImageNet VID competition. Similar to the ImageNet object detection task (DET), the task is to classify and locate objects in every image. However, instead of containing a collection of independent images, the VID dataset groups several frames from the same video into video clips or ”snippets”. All visible objects in every frame are annotated with a class label and bounding box. The VID dataset contains 30 object categories which are a subset of the 200 categories provided in the DET dataset. The dataset contains three sets of non-overlapping videos and labels: train, validation, and test. The training, validation and test sets in the initial release of the VID dataset contain 1,952, 281 and 458 snippets respectively. Meanwhile, the final release roughly doubled the number snippets in each set to 3,862, 555, and 937. The number of snippets and number of images in each set of the ImageNet VID dataset can be found in Table

4.1 Training Details for RPN and Classifier

In Faster R-CNN, the RPN and the classification network share convolutional layers and are trained together in an alternating fashion. First, we trained a Zeiler Fergus (ZF) style [14]

For our classifier, we considered both a Zeiler Fergus style network (ZF net) and VGG16 network (VGG net) [10]

. The ZF network was trained on the initial VID training set and the VGG16 net was pre-trained on the training and validation sets of the 2015 ImageNet DET challenge. The DET dataset contained 200 object categories and the train and validation sets contained 456,567 and 55,502 images, respectively. We then replaced the 200 unit softmax layer with a 30 unit one and trained it on the initial VID training set (405K images) while keeping all of the other layers fixed. It should be noted that we never used the full training set (1.1M images) in any of our experiments. Our models were trained using a heavily modified version of the open source Faster R-CNN Caffe code released by the authors

We validated our method by conducting experiments on the initial and full validation set as well as the full test set of the ImageNet VID dataset. During the post-processing phase, we considered four different techniques: (i) single image NMS (ii) Seq-NMS (avg) (iii) Seq-NMS (max) (iv) Seq-NMS (best). Seq-NMS (avg) and Seq-NMS (max) rescored the sequences selected by Seq-NMS using the average or max detection scores respectively, while Seq-NMS (best) chose the best performing of the three aforementioned techniques on each class and averaged the results.

Table 2 shows our results on the initial and full validation set. We found that using VGG net gave a substantial improvement over using the architecture described by Zeiler and Fergus. Sequence re-scoring with Seq-NMS gave further improvements. On the initial validation set, Seq-NMS (avg) achieved a mAP score of 51.5%. This result can be further improved to 53.6% when combining all three NMS techniques. Meanwhile on the full validation set, Seq-NMS (avg) got a mAP score of 51.4%. When combining all three NMS methods (Seq-NMS (best)) on the full val set, we achieve a mAP score of 52.2%. In Figure 3, we give a full breakdown of Seq-NMS’ (avg) performance across all 30 classes and compare it with the single image NMS technique. Figure 4 shows which classes experienced the largest gains in performance when switching from single image NMS to Seq-NMS (avg). The 5 classes that experienced the highest gains in performance were: (i) motorcycle (ii) turtle (iii) red panda (iv) lizard and (v) sheep.

On the test set, we ranked 3rd in terms of overall mean average precision (mAP). The results of VGG net models are shown in Table 3. Once again, we see that Seq-NMS and Rescoring showed significant improvements over traditional frame-wise NMS post-processing. Our best submission achieved a mAP of 48.7%222http://image-net.org/challenges/LSVRC/2015/results.

We also report the mAP score of the challenge’s top performing method [7] on both the validation and test sets in Tables 2 and 3. In [7], the authors present a suite of techniques including (i) a strong still-image detector (ii) bounding box suppression and propagation (iii) trajectory / tubelet re-scoring and (iv) model combination. The still-image detector’s performance achieves a mAP of 67.7%. When directly comparing the amount of improvement obtained just from temporal information (ii) and (iii), our method is superior (7.3% vs. 6.7%).

We also present instances where Seq-NMS does not appear to improve performance in Figure 6. One case where Seq-NMS may not help is when there are several objects with similar appearance close together in the video (clip a). This will cause the detector to drift from one object to another which leads to missed detections and incorrect score assignment. Another case is when Seq-NMS accumulates spurious detections which leads to many more false positives (clips b and c). This occurs because Seq-NMS’ objective function, the sum of a sequence’s confidence scores, does not penalize against adding more detections.

Many previous works in video object detection framed as multiple object tracking. A popular subclass of these techniques were models that did ”tracking-by-detection”, whereby a detection algorithm is applied on each video frame and the detections are associated across frames to form trajectories for each object. Previous detection methods were usually based on motion [17] or object appearance [4]

. With regards to the association step, a classic method involved using Kalman filters to predict tracks and the Hungarian method

further improved on Kalman filters by being able to handle multiple hypotheses. Other classes of methods tried to compute all of the object trajectories at once using linear programming

. While these methods are able to find a global optimum with high probability, they assume that the number of objects to be tracked is known a priori. On the other hand, dynamic programming

[12, 1] can also be used to find trajectories one by one in a greedy fashion. Our proposed model is similar in that it takes detections from a state-of-the-art single image object detection method [9] and subsequently associates tracks over time by finding the highest scoring path by also using dynamic programming.

By using the strong baseline of Faster R-CNN and leveraging additional temporal information, we were one of the top performers in the ImageNet Object Detection from Video challenge. We would like to continue pursuing improvements to our submission, including training on the entire VID dataset, experimenting with neural network suppression, and performing a deeper analysis on our model designed to elucidate its weaknesses.

The six Tesla K40 GPUs used for this research were donated by the NVIDIA Corporation.