What fraction of the single item n buyers setting's expected optimal revenue MyeRev can the second price auction with reserves achieve? In the special case where the buyers' valuation distributions are all drawn i.i.d. and the distributions satisfy the regularity condition, the second price auction with an anonymous reserve (ASP) is the optimal auction itself. As the setting gets more complex, there are established upper bounds on the fraction of MyeRev that ASP can achieve. On the contrary, no such upper bounds are known for the fraction of MyeRev achievable by the second price auction with eager personalized reserves (ESP). In particular, no separation was earlier known between ESP's revenue and MyeRev even in the most general setting of non-identical product distributions that don't satisfy the regularity condition. In this paper we establish the first separation results for ESP: we show that even in the case of distributions drawn i.i.d., but not necessarily satisfying the regularity condition, the ESP cannot achieve more than a 0.778 fraction of MyeRev in general. Combined with Correa et al.'s result (EC 2017) that ESP can achieve at least a 0.745 fraction of MyeRev, this nearly bridges the gap between upper and lower bounds on ESP's approximation factor. 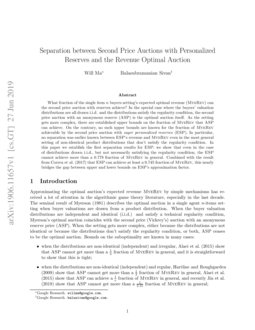 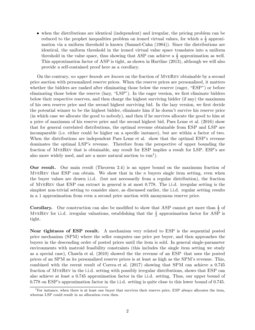 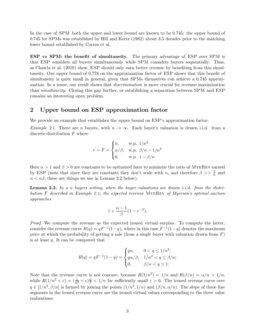 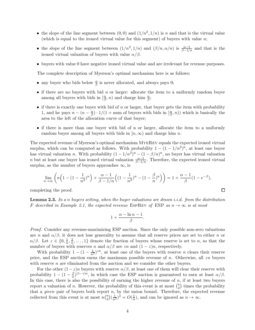 Consider a seller that intends to auction some item. The seller can inve...
Amir Ban, et al. ∙

We study the design of prior-independent auctions in a setting with hete...
Guru Guruganesh, et al. ∙

The Limits of an Information Intermediary in Auction Design

We study the limits of an information intermediary in Bayesian auctions....
Reza Alijani, et al. ∙

The Better Half of Selling Separately

by simple mechanisms has received a lot of attention in the algorithmic game theory literature, especially in the last decade. The seminal result of

On the contrary, no upper bounds are known on the fraction of MyeRev obtainable by a second price auction with personalized reserve prices. When the reserve prices are personalized, it matters whether the bidders are ranked after eliminating those below the reserve (eager, “ESP”) or before eliminating those below the reserve (lazy, “LSP”). In the eager version, we first eliminate bidders below their respective reserves, and then charge the highest surviving bidder (if any) the maximum of his own reserve price and the second highest surviving bid. In the lazy version, we first decide the potential winner to be the highest bidder, eliminate him if he doesn’t survive his reserve price (in which case we allocate the good to nobody), and then if he survives allocate the good to him at a price of maximum of his reserve price and the second highest bid. Paes Leme et al. (2016) show that for general correlated distributions, the optimal revenue obtainable from ESP and LSP are incomparable (i.e. either could be higher on a specific instance), but are within a factor of two. When the distributions are independent Paes Leme et al. show that the optimal ESP’s revenue dominates the optimal LSP’s revenue. Therefore from the perspective of upper bounding the fraction of MyeRev that is obtainable, any result for ESP implies a result for LSP. ESP’s are also more widely used, and are a more natural auction to run111For instance, when there is at least one buyer that survives their reserve price, ESP always allocates the item, whereas LSP could result in no allocation even then.).

Our main result (Theorem 2.4) is an upper bound on the maximum fraction of MyeRev that ESP can obtain. We show that in the n buyers single item setting, even when the buyer values are drawn i.i.d. (but not necessarily from a regular distribution), the fraction of MyeRev that ESP can extract in general is at most 0.778. The i.i.d. irregular setting is the simplest non-trivial setting to consider since, as discussed earlier, the i.i.d. regular setting results in a 1 approximation from even a second price auction with anonymous reserve price.

Our construction can also be modified to show that ASP cannot get more than 12 of MyeRev for i.i.d. irregular valuations, establishing that the 12 approximation factor for ASP is tight.

Near tightness of ESP result.

A mechanism very related to ESP is the sequential posted price mechanism (SPM) where the seller computes one price per buyer, and then approaches the buyers in the descending order of posted prices until the item is sold. In general single-parameter environments with matroid feasibility constraints (this includes the single item setting we study as a special case), Chawla et al. (2010) showed the the revenue of an ESP  that uses the posted prices of an SPM as its personalized reserve prices is at least as high as the SPM’s revenue. This, combined with the recent result of Correa et al. (2017) showing that SPM can achieve a 0.745 fraction of MyeRev in the i.i.d. setting with possibly irregular distributions, shows that ESP can also achieve at least a 0.745 approximation factor in the i.i.d. setting. Thus, our upper bound of 0.778 on ESP’s approximation factor in the i.i.d. setting is quite close to this lower bound of 0.745. In the case of SPM  both the upper and lower bound are known to be 0.745: the upper bound of 0.745 for SPMs was established by Hill and Kertz (1982) about 3.5 decades prior to the matching lower bound established by Correa et al.

Esp vs Spm: the benefit of simultaneity.

The primary advantage of ESP over SPM is that ESP considers all buyers simultaneously while SPM considers buyers sequentially. Thus, as Chawla et al. (2010) show, ESP should only earn better revenue by benefiting from this simultaneity. Our upper bound of 0.778 on the approximation factor of ESP shows that this benefit of simultaneity is quite small in general, given that SPMs themselves can achieve a 0.745 approximation. In a sense, our result shows that discrimination is more crucial for revenue maximization than simultaneity. Closing this gap further, or establishing a separation between SPM and ESP remains an interesting open problem.

We provide an example that establishes the upper bound on ESP’s approximation factor.

There are n buyers, with n→∞. Each buyer’s valuation is drawn i.i.d. from a discrete distribution F where

Here α>1 and β>0 are constants to be optimized later to minimize the ratio of MyeRev earned by ESP (note that since they are constants they don’t scale with n, and therefore β>>1n and α<nβ; these are things we use in Lemma 2.2 below).

In a n buyers setting, when the buyer valuations are drawn i.i.d. from the distribution F described in Example 2.1, the expected revenue MyeRev of Myerson’s optimal auction approaches

F) is at least q. It can be computed that

The complete description of Myerson’s optimal mechanism here is as follows:

In a n buyers setting, when the buyer valuations are drawn i.i.d. from the distribution F described in Example 2.1, the expected revenue EspRev of ESP as n→∞ is at most

Consider any revenue-maximizing ESP auction. Since the only possible non-zero valuations are n and α/β, it does not lose generality to assume that all reserve prices are set to either n or α/β. Let z∈{0,1n,2n,…,1} denote the fraction of buyers whose reserve is set to n, so that the number of buyers with reserves n and α/β are zn and (1−z)n, respectively.

For the other (1−z)n buyers with reserve α/β, at least one of them will clear their reserve with probability 1−(1−βn)(1−z)n, in which case the ESP auction is guaranteed to earn at least α/β. In this case, there is also the possibility of earning the higher revenue of n, if at least two buyers report a valuation of n. However, the probability of this event is at most (n2) times the probability that a given pair of buyers both report n, by the union bound. Therefore, the expected revenue collected from this event is at most n(n2)(1n2)2=O(1n), and can be ignored as n→∞.

Collecting the above terms, for any n and z∈{0,1n,2n,…,1}, the expected revenue of the corresponding ESP auction is

where we used the binomial theorem in the first inequality. The maximum of the concave function z+αβ(1−e−β(1−z)) over z∈[0,1] is attained at z=1−lnαβ, and equals 1−lnαβ+αβ(1−1α), completing the proof. ∎

Let \textscMyeRev(n,D) and \textscEspRev(n,D) denote respectively the revenue of the optimal auction (Myerson’s auction) and the second price auction with personalized reserves in a single-item setting with n buyers whose values are drawn i.i.d from D. Then:

Consider Example 2.1. By Lemmas 2.2 and 2.3, the fraction of Myerson’s optimal revenue earned by an ESP auction in this example is at most

which approaches 1 as n→∞. This completes the proof.