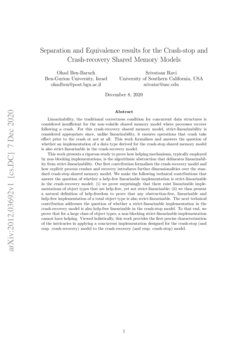 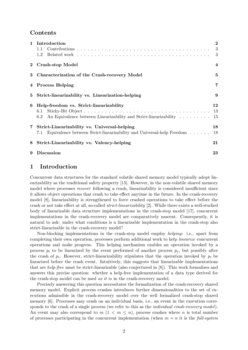 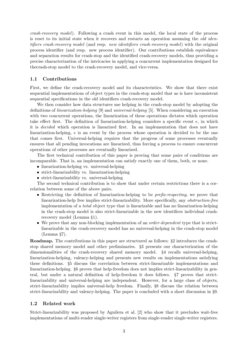 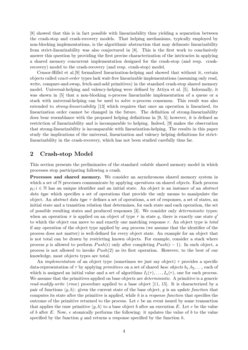 Non-blocking implementations in the crash-stop model employ helping: i.e., apart from completing their own operation, processes perform additional work to help linearize concurrent operations and make progress. This helping mechanism enables an operation invoked by a process pi to be linearized by the event performed of another process pj, but possibly after the crash of pi. However, strict-linearizability stipulates that the operation invoked by pi be linearized before the crash event. Intuitively, this suggests that linearizable implementations that are help-free must be strict-linearizable (also conjectured in [golab15]). This work formalizes and answers this precise question: whether a help-free implementation of a data type derived for the crash-stop model can be used as it is in the crash-recovery model.

We then consider how data structures use helping in the crash-stop model by adopting the definitions of linearization-helping [help15] and universal-helping [DBLP:jattiya-help]. When considering an execution with two concurrent operations, the linearization of these operations dictates which operation take effect first. The definition of linearization-helping considers a specific event e, in which it is decided which operation is linearized first. In an implementation that does not have linearization-helping, e is an event by the process whose operation is decided to be the one that comes first. Universal-helping requires that the progress of some processes eventually ensures that all pending invocations are linearized, thus forcing a process to ensure concurrent operations of other processes are eventually linearized.

The first technical contribution of this paper is proving that some pairs of conditions are incomparable. That is, an implementation can satisfy exactly one of them, both, or none.

The second technical contribution is to show that under certain restrictions there is a correlation between some of the above pairs.

Censor-Hillel et al.[help15] formalized linearization-helping and showed that without it, certain objects called exact-order types lack wait-free linearizable implementations (assuming only read, write, compare-and-swap, fetch-and-add primitives) in the standard crash-stop shared memory model. Universal-helping and valency-helping were defined by Attiya et al. [DBLP:jattiya-help]. Informally, it was shown in [DBLP:jattiya-help] that a non-blocking n-process linearizable implementation of a queue or a stack with universal-helping can be used to solve n-process consensus. This result was also extended to strong-linearizability [golab-strong] which requires that once an operation is linearized, its linearization order cannot be changed in the future. The definition of strong-linearizability does bear resemblance with the proposed helping definitions in [help15, DBLP:jattiya-help]; however, it is defined as restriction of linearizability and is incomparable to helping. Indeed, [help15] makes the observation that strong-linearizability is incomparable with linearization-helping. The results in this paper study the implications of the universal, linearization and valency helping definitions for strict-linearizability in the crash-recovery, which has not been studied carefully thus far.

This section presents the preliminaries of the standard volatile shared memory model in which processes stop participating following a crash.

Processes and shared memory. We consider an asynchronous shared memory system in which a set of N processes communicate by applying operations on shared objects. Each process pi;i∈N has an unique identifier and an initial state. An object is an instance of an abstract data type which specifies a set of operations that provide the only means to manipulate the object. An abstract data type τ defines a set of operations, a set of responses, a set of states, an initial state and a transition relation that determines, for each state and each operation, the set of possible resulting states and produced responses [AFHHT07]. We consider only deterministic types: when an operation π is applied on an object of type τ in state q, there is exactly one state q′ to which the object can move to and exactly one matching response r. An object type is total if any operation of the object type applied by any process (we assume that the identifier of the process does not matter) is well-defined for every object state. An example for an object that is not total can be drawn by restricting known objects. For example, consider a stack where process p is allowed to perform Push(i) only after completing Push(i−1). In such object, a process is not allowed to invoke Push(2) as its first operation. However, to the best of our knowledge, most objects types are total.

An implementation of an object type (sometimes we just say object) τ provides a specific data-representation of τ by applying primitives on a set of shared base objects b1,b2,…, each of which is assigned an initial value and a set of algorithms I1(τ),…,In(τ), one for each process. We assume that the primitives applied on base objects are deterministic. A primitive is a generic read-modify-write (rmw) procedure applied to a base object [G05, Her91]. It is characterized by a pair of functions ⟨g,h⟩: given the current state of the base object, g is an update function that computes its state after the primitive is applied, while h is a response function that specifies the outcome of the primitive returned to the process. Let e be an event issued by some transaction that applies the rmw primitive ⟨g,h⟩ to a base object b after an execution E. Let v be the value of b after E. Now, e atomically performs the following: it updates the value of b to the value specified by the function g and returns a response specified by the function h.

An execution fragment is a (finite or infinite) sequence of events. An execution of an implementation I is an execution fragment where, starting from the initial configuration, each event is issued according to I and each response of a rmw event matches the state of b resulting from all preceding events. An execution E⋅E′, denoting the concatenation of E and E′, is an extension of E and we say that E′ extends E. Let E be an execution fragment. For every process identifier k, E|k denotes the subsequence of E restricted to events of process pk. If E|k is non-empty, we say that pk participates in E, else we say E is pk-free. An operation π precedes another operation π′ in an execution E, denoted π→Eπ′, if the response of π occurs before the invocation of π′ in E. Two operations are concurrent if neither precedes the other. An execution is sequential if it has no concurrent operations. Two executions E and E′ are indistinguishable to a set P of processes, if for each process pk∈P, E|k=E′|k. An operation πk∈ops(E) is complete in E if it returns a matching response in E. Otherwise we say that it is incomplete or pending in E. We say that an execution E is complete if every invoked operation is complete in E.

Well-formed executions. In the crash-stop model, we assume that executions are well-formed: no process invokes a new operation before the previous operation returns. Specifically, we assume that for all pk, E|k begins with the invocation of an operation, is sequential and there is no event between a matching response event and the subsequent following invocation.

Safety property: Linearizability. A history H of an execution E is the subsequence of E consisting of all invocations and responses of operations. Histories H and H′ are equivalent if for every process pi, H|i=H′|i. A complete history H is linearizable with respect to an object type τ if there exists a sequential history S equivalent to H such that (1) →H⊆→S and (2) S is consistent with the sequential specification of type τ. A history H is linearizable if it can be completed (by adding matching responses to a subset of incomplete operations in H and removing the rest) to a linearizable history [HW90, AW04].

3 Characterization of the Crash-recovery Model

Processes and non-volatile shared memory. We extend the crash-stop model defined in §2 by allow any process pi to fail by crashing; following a crash, process pi does not take any steps until the invocation of a new operation. Following a crash, the state of the shared objects remains the same as before the crash; however, the local state of crashed process is set to its initial state.

Executions and configurations. An event of a process pi in the crash-recovery model is any step admissible in the crash-stop model as well as a special ⊥P crash step; P is a set of process identifiers. The ⊥P step performs the following actions: (i) for each i∈P, the local state of pi set to its initial state, (ii) the execution E1⋅⊥P⋅E2; E2 is P-free, is indistinguishable to every process j∉P from the execution E1⋅E2. In other words, processes are not aware to crash events.

Safety property: Strict-Linearizability. A history H is strict-linearizable with respect to an object type τ if there exists a sequential history S equivalent to Hc, a strict completion of H, such that (1) →Hc⊆→S and (2) S is consistent with the sequential specification of τ.

New identifiers crash-recovery model. We say that an execution E is admissible in the new identifiers crash-recovery model if for any process pi and any event ⊥P in E such that i∈P, process pi no longer takes steps following ⊥P in E. Note that even in this model, there are at most N active processes in an execution, i.e., processes that have not crashed.

There exists a sequential implementation A of an object type τ in the crash-stop model providing sequential liveness, such that A is not consistent with the sequential specification of τ in the old identifiers system-wide crash-recovery model.

To prove the claim we present an implementation A of type τ, and construct an execution in the old identifiers system-wide crash-recovery model, such that process pi invokes and completes in a crash-free manner an operation σ; however σ returns a response that is not consistent with the sequential specification of τ (sequential liveness in the lemma statement simply requires that a process running sequentially will complete its operation with a matching response). Notice that the lemma holds for the more restricted system-wide crash model, hence it holds for the individual crash model as well. Moreover, the lemma holds even for the weak sequential liveness progress condition, where no concurrency is allowed.