This paper studies semiparametric contextual bandits, a generalization of the linear stochastic bandit problem where the reward for an action is modeled as a linear function of known action features confounded by an non-linear action-independent term. We design new algorithms that achieve Õ(d√(T)) regret over T rounds, when the linear function is d-dimensional, which matches the best known bounds for the simpler unconfounded case and improves on a recent result of Greenewald et al. (2017). Via an empirical evaluation, we show that our algorithms outperform prior approaches when there are non-linear confounding effects on the rewards. Technically, our algorithms use a new reward estimator inspired by doubly-robust approaches and our proofs require new concentration inequalities for self-normalized martingales. 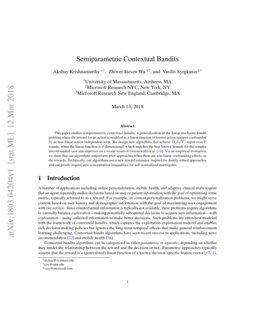 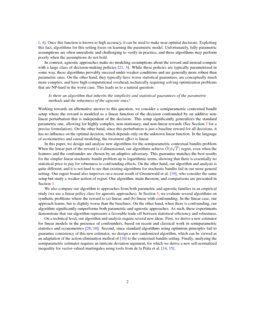 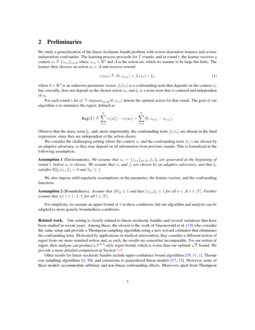 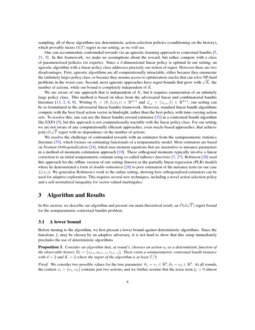 In the classical contextual bandits problem, in each round t, a learner ...
Santiago Balseiro, et al. ∙

Adapting to misspecification in contextual bandits with offline regression oracles

In this paper we study the adversarial combinatorial bandit with a known...
Xi Chen, et al. ∙

We give novel algorithms for multi-task and lifelong linear bandits with...
Jiaqi Yang, et al. ∙

We study a generalization of the linear stochastic bandit problem with action-dependent features and action-independent confounder. The learning process proceeds for T rounds, and in round t, the learner receives a context xt≜{zt,a}a∈\Acal where zt,a∈\RRd and \Acal is the action set, which we assume to be large but finite. The learner then chooses an action at∈\Acal and receives reward r_t(a_t) ⟨θ, z_t,a_t⟩+ f_t(x_t) + ξ_t, where θ∈\RRd is an unknown parameter vector, ft(xt) is a confounding term that depends on the context xt but, crucially, does not depend on the chosen action at, and ξt is a noise term that is centered and independent of at. For each round t, let a⋆t≜\argmaxa∈\Acal⟨θ,zt,a⟩ denote the optimal action for that round. The goal of our algorithm is to minimize the regret, defined as Reg(T) ∑_t=1^T r_t(a_t^⋆) - r_t(a_t) = ∑_t=1^T⟨θ, z_t,a_t^⋆ - z_t,a_t⟩. Observe that the noise term ξt, and, more importantly, the confounding term ft(xt) are absent in the final expression, since they are independent of the action choice. We consider the challenging setting where the context xt and the confounding term ft(⋅) are chosen by an adaptive adversary, so they may depend on all information from previous rounds. This is formalized in the following assumption. [Environment] We assume that xt={zt,a}a∈\Acal,ft,ξt are generated at the beginning of round t, before at is chosen. We assume that xt and ft are chosen by an adaptive adversary, and that ξt satisfies \EE[ξt|xt,ft]=0 and |ξt|≤1. We also impose mild regularity assumptions on the parameter, the feature vectors, and the confounding functions. [Boundedness] Assume that ∥θ∥2≤1 and that ∥zt,a∥2≤1 for all a∈\Acal,t∈[T]. Further assume that ft(⋅)∈[−1,1] for all t∈[T]. For simplicity, we assume an upper bound of 1 in these conditions, but our algorithm and analysis can be adapted to more generic regularity conditions.