The utilization of computer technology to solve problems in medical scenarios has attracted considerable attention in recent years, which still has great potential and space for exploration. Among them, machine learning has been widely used in the prediction, diagnosis and even treatment of Sepsis. However, state-of-the-art methods require large amounts of labeled medical data for supervised learning. In real-world applications, the lack of labeled data will cause enormous obstacles if one hospital wants to deploy a new Sepsis detection system. Different from the supervised learning setting, we need to use known information (e.g., from another hospital with rich labeled data) to help build a model with acceptable performance, i.e., transfer learning. In this paper, we propose a semi-supervised optimal transport with self-paced ensemble framework for Sepsis early detection, called SPSSOT, to transfer knowledge from the other that has rich labeled data. In SPSSOT, we first extract the same clinical indicators from the source domain (e.g., hospital with rich labeled data) and the target domain (e.g., hospital with little labeled data), then we combine the semi-supervised domain adaptation based on optimal transport theory with self-paced under-sampling to avoid a negative transfer possibly caused by covariate shift and class imbalance. On the whole, SPSSOT is an end-to-end transfer learning method for Sepsis early detection which can automatically select suitable samples from two domains respectively according to the number of iterations and align feature space of two domains. Extensive experiments on two open clinical datasets demonstrate that comparing with other methods, our proposed SPSSOT, can significantly improve the AUC values with only 1 data in the target domain in two transfer learning scenarios, MIMIC rightarrow Challenge and Challenge rightarrow MIMIC. 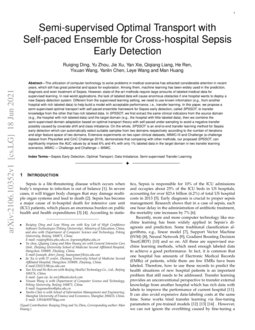 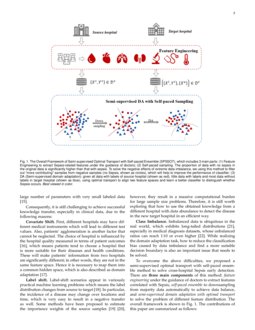 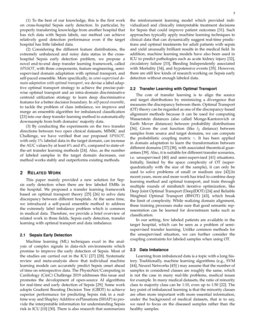 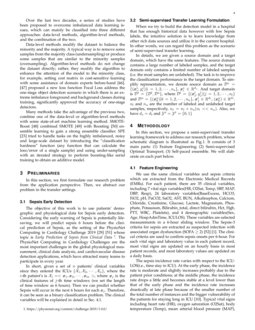