Dialogue systems benefit greatly from optimizing on detailed annotations, such as transcribed utterances, internal dialogue state representations and dialogue act labels. However, collecting these annotations is expensive and time-consuming, holding back development in the area of dialogue modelling. In this paper, we investigate semi-supervised learning methods that are able to reduce the amount of required intermediate labelling. We find that by leveraging un-annotated data instead, the amount of turn-level annotations of dialogue state can be significantly reduced when building a neural dialogue system. Our analysis on the MultiWOZ corpus, covering a range of domains and topics, finds that annotations can be reduced by up to 30% while maintaining equivalent system performance. We also describe and evaluate the first end-to-end dialogue model created for the MultiWOZ corpus. 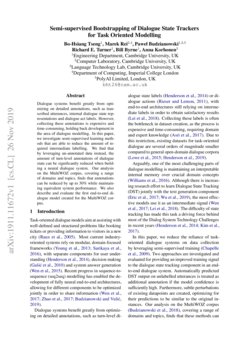 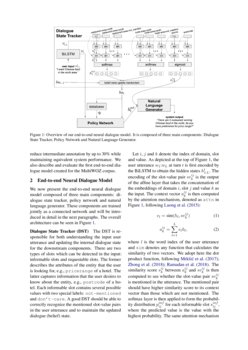 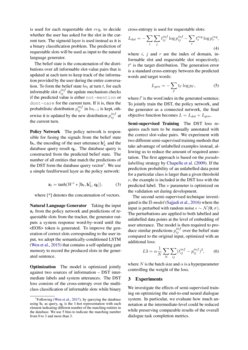 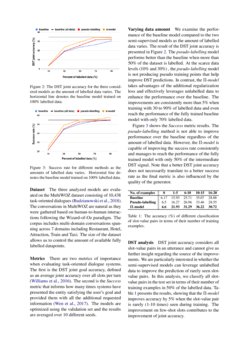 Arguably, one of the most challenging parts of dialogue modelling is maintaining an interpretable internal memory over crucial domain concepts Williams et al. (2016)

. Although there is increasing research effort to learn Dialogue State Tracking (DST) jointly with the text generation component

In this paper, we reduce the reliance of task-oriented dialogue systems on data collection by leveraging semi-supervised training Chapelle et al. (2009). Two approaches are investigated and evaluated for providing an improved training signal to the dialogue state tracking component in an end-to-end dialogue system. Automatically predicted DST output on unlabelled utterances is treated as additional annotation if the model confidence is sufficiently high. Furthermore, subtle perturbations of existing datapoints are created, optimizing for their predictions to be similar to the original instances. Our analysis on the MultiWOZ corpus Budzianowski et al. (2018), covering a range of domains and topics, finds that these methods can reduce intermediate annotation by up to 30% while maintaining equivalent system performance. We also describe and evaluate the first end-to-end dialogue model created for the MultiWOZ corpus.

We now present the end-to-end neural dialogue model composed of three main components: dialogue state tracker, policy network and natural language generator. These components are trained jointly as a connected network and will be introduced in detail in the next paragraphs. The overall architecture can be seen in Figure 1.

The DST is responsible for both understanding the input user utterance and updating the internal dialogue state for the downstream components. There are two types of slots which can be detected in the input: informable slots and requestable slots. The former describes the attributes of the entity that the user is looking for, e.g., pricerange of a hotel. The latter captures information that the user desires to know about the entity, e.g., postcode of a hotel. Each informable slot contains several possible values with two special labels: not-mentioned and don’t-care. A good DST should be able to correctly recognize the mentioned slot-value pairs in the user utterance and to maintain the updated dialogue (belief) state.

Let i, j and k denote the index of domain, slot and value. As depicted at the top of Figure 1, the user utterance w1:wL at turn t is first encoded by the BiLSTM to obtain the hidden states ht1:L. The encoding of the slot-value pair svijk

i, slot j and value k

as the input. The context vector

aijk is then computed by the attention mechanism, denoted as attn in Figure 1, following Luong et al. (2015):

where l is the word index of the user utterance and sim denotes any function that calculates the similarity of two vectors. We adopt here the dot product function, following Mrkšić et al. (2017); Zhong et al. (2018); Ramadan et al. (2018). The similarity score sijk between aijk and svijk is then computed to see whether the slot-value pair svijk

is mentioned in the utterance. The mentioned pair should have higher similarity score to its context vector than those which are not mentioned. The softmax layer is then applied to form the probability distribution

pinfij for each informable slot sinfij, where the predicted value is the value with the highest probability. The same attention mechanism is used for each requestable slot reqr to decide whether the user has asked for the slot in the current turn. The sigmoid layer is used instead as it is a binary classification problem. The prediction of requestable slots will be used as input to the natural language generator.

The belief state is the concatenation of the distributions over all informable slot-value pairs that is updated at each turn to keep track of the information provided by the user during the entire conversation. To form the belief state bst at turn t, for each informable slot sinfij the update mechanism checks if the predicted value is either not-mention or dont-care for the current turn. If it is, then the probabilistic distribution pinfij in bst−1 is kept, otherwise it is updated by the new distribution pinfij at the current turn.

where [*] denotes the concatenation of vectors.

Taking the input zt from the policy network and predictions of requestable slots from the tracker, the generator outputs a system response word-by-word until the <EOS> token is generated. To improve the generation of correct slots corresponding to the user input, we adopt the semantically-conditioned LSTM Wen et al. (2015) that contains a self-updating gate memory to record the produced slots in the generated sentence.

The model is optimized jointly against two sources of information – DST intermediate labels and system utterances. The DST loss consists of the cross-entropy over the multi-class classification of informable slots while binary cross-entropy is used for requestable slots:

where i, j and r are the index of domain, informable slot and requestable slot respectively; t∗ is the target distribution. The generation error is a standard cross-entropy between the predicted words and target words:

where l′ is the word index in the generated sentence. To jointly train the DST, the policy network, and the generator as a connected network, the final objective function becomes L=Ldst+Lgen.

The DST loss requires each turn to be manually annotated with the correct slot-value pairs. We experiment with two different semi-supervised training methods that take advantage of unlabelled examples instead, allowing us to reduce the amount of required annotation. The first approach is based on the pseudo-labelling strategy by Chapelle et al. (2009). If the prediction probability of an unlabelled data point for a particular class is larger than a given threshold ν, the example is included in the DST loss with the predicted label. The ν parameter is optimized on the validation set during development.

The second semi-supervised technique investigated is the Π-model Sajjadi et al. (2016) where the input is perturbed with random noise ϵ∼N(0,σ). The perturbations are applied to both labelled and unlabelled data points at the level of embedding of user utterance. The model is then required to produce similar predictions pinfij over the belief state compared to the original input, optimized with an additional loss:

where N is the batch size and α

is a hyperparameter controlling the weight of the loss.

We investigate the effects of semi-supervised training on optimizing the end-to-end neural dialogue system. In particular, we evaluate how much annotation at the intermediate-level could be reduced while preserving comparable results of the overall dialogue task completion metrics.

The three analyzed models are evaluated on the MultiWOZ dataset consisting of 10,438 task-oriented dialogues Budzianowski et al. (2018). The conversations in MultiWOZ are natural as they were gathered based on human-to-human interactions following the Wizard-of-Oz paradigm. The corpus includes multi-domain conversations spanning across 7 domains including Restaurant, Hotel, Attraction, Train and Taxi. The size of the dataset allows us to control the amount of available fully labelled datapoints.

There are two metrics of importance when evaluating task-oriented dialogue systems. The first is the DST joint goal accuracy, defined as an average joint accuracy over all slots per turn Williams et al. (2016). The second is the Success metric that informs how many times systems have presented the entity satisfying the user’s goal and provided them with all the additional requested information Wen et al. (2017). The models are optimized using the validation set and the results are averaged over 10 different seeds.

We examine the performance of the baseline model compared to the two semi-supervised models as the amount of labelled data varies. The result of the DST joint accuracy is presented in Figure 2. The pseudo-labelling model performs better than the baseline when more than 50% of the dataset is labelled. At the scarce data levels (10% and 30%) , the pseudo-labelling model is not producing pseudo training points that help improve DST predictions. In contrast, the Π-model takes advantages of the additional regularization loss and effectively leverages unlabelled data to enhance the performance over the baseline. The improvements are consistently more than 5% when training with 30 to 90% of labelled data and even reach the performance of the fully trained baseline model with only 70% labelled data.

Figure 3 shows the Success metric results. The pseudo-labelling method is not able to improve performance over the baseline regardless of the amount of labelled data. However, the Π-model is capable of improving the success rate consistently and manages to reach the performance of the fully trained model with only 50% of the intermediate DST signal. Note that a better DST joint accuracy does not necessarily translate to a better success rate as the final metric is also influenced by the quality of the generator.

1 presents the results, showing that the Π-model improves accuracy by 5% when the slot-value pair is rarely (1-10 times) seen during training. The improvement on few-shot slots contributes to the improvement of joint accuracy.

We also investigate if the improvements in the success rate are consistent among all domains. Figure 4 shows the success rate on individual domains in the case of 50% of data is labelled. Both semi-supervised models improve performance over the baseline in all domains except for the taxi domain. We hypothesize this comes from the fact that the taxi domain is a relatively easy domain with only 4 possible slots.

In this paper, we have analyzed how much semi- supervised techniques could help to reduce the need for intermediate-level annotations in training neural task-oriented dialogue models. The results suggest that we do not need to annotate all intermediate signals and are able to leverage unannotated examples for training these components instead. In the future, we plan to experiment with other intermediate signals like dialogue acts. Further improvements could potentially be obtained from employing more advanced regularization losses Oliver et al. (2018).