02/12/2020
∙
by   Shi Chen, et al.
∙
University of Wisconsin-Madison
∙
The Regents of the University of California
∙

The varying-mass Schrödinger equation (VMSE) has been successfully applied to model electronic properties of semiconductor hetero-stuctures, for example, quantum dots and quantum wells. In this paper, we consider VMSE with small random heterogeneities, and derive radiative transfer equations for its solutions. The main tool is to systematically apply the Wigner transform in the semiclassical regime (the rescaled Planck constant ε≪ 1), and then expand the resulted Wigner equation to proper orders of ε. As a proof of concept, we numerically compute both VMSE and radiative transfer equations, and show that their solutions agree well. 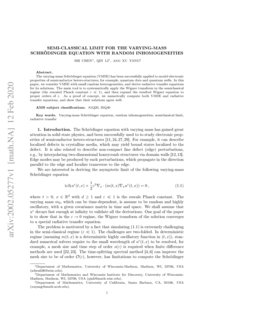 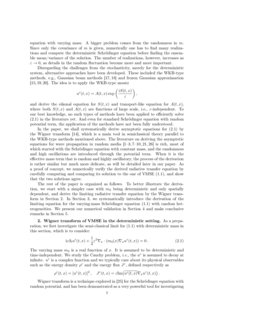 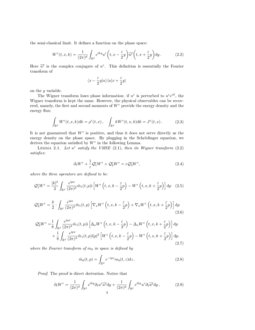 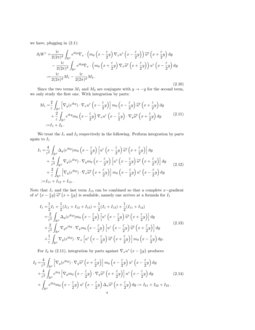 Semi-classical limit of an inverse problem for the Schrödinger equation

It is a classical derivation that the Wigner equation, derived from the ...
Shi Chen, et al. ∙

A particle method for the homogeneous Landau equation

Transforming the Lindblad Equation into a System of Linear Equations: Performance Optimization and Parallelization

Remarks on the Radiative Transfer Equations for Climatology

Using theoretical and numerical arguments we discuss some of the commonl...
Claude Bardos, et al. ∙

The Schrödinger equation with varying mass has gained great attention in solid state physics, and been successfully used to to study electronic properties of semiconductor hetero-structures [27, 24, 11, 29]

. For example, it can describe localized defects in crystalline media, which may yield bound states localized to the defect. It is also related to describe non-compact line defect (edge) perturbations, e.g., by interpolating two-dimensional honeycomb structures via domain walls

[13, 12]. Edge modes may be produced by such perturbations, which propagate in the direction parallel to the edge and localize transverse to the edge.

where t>0, x∈Rd with d≥1 and ε≪1 is the rescale Planck constant. The varying mass m0, which can be time-dependent, is assume to be random and highly oscillatory, with a given covariance matrix in time and space. We shall assume that uε decays fast enough at infinity to validate all the derivations. One goal of the paper is to show that in the ε→0 regime, the Wigner transform of the solution converges to a special radiative transfer equation.

The problem is motivated by a fact that simulating (1.1) is extremely challenging in the semi-classical regime (ε≪1). The challenges are two-folded. In deterministic regime (meaning m(t,x) is a deterministic highly oscillatory function in (t,x)), standard numerical solvers require to the small wavelength of uε(t,x) to be resolved, for example, a mesh size and time step of order o(ε) is required when finite difference methods are used [22, 23]. The time-splitting spectral method [4, 6] can improve the mesh size to be of order O(ε), however, has limitations to compute the Schrödinger equation with varying mass. A bigger problem comes from the randomness in m. Since only the covariance of m

is given, numerically one has to find many realizations and compute the deterministic Schrödinger equation before finding the ensemble mean/variance of the solution. The number of realizations, however, increases as

ε→0, as details in the random fluctuation become more and more important.

Disregarding the challenges from the stochasticity, merely for the deterministic system, alternative approaches have been developed. These included the WKB-type methods, e.g., Gaussian beam methods [18, 17] and frozen Gaussian approximation [15, 19, 20]. The idea is to apply the WKB-type ansatz

and derive the eikonal equation for S(t,x) and transport-like equation for A(t,x), where both S(t,x) and A(t,x) are functions of large scale, i.e., ε-independent. To our best knowledge, no such types of methods have been applied to efficiently solve (2.1) in the literature yet. And even for standard Schrödinger equation with random potential term, the application of the methods have not been fully understood.

In the paper, we shall systematically derive asymptotic equations for (2.1) by the Wigner transform [14], which is a main tool in semiclassical theory parallel to the WKB-type methods mentioned above. The literature on deriving the asymptotic equations for wave propagation in random media [2, 3, 1, 26, 21, 10, 9, 8, 7] is rich, most of which started with the Schrödinger equation with constant mass, and the randomness and high oscillations are introduced through the potential term. When it is the effective mass term that is random and highly oscillatory, the process of the derivation is rather similar but much more delicate, as will be detailed later in our paper. As a proof of concept, we numerically verify the derived radiative transfer equation by carefully computing and comparing its solution to the one of VMSE (1.1), and show that the two solutions agree.

The rest of the paper is organized as follows. To better illustrate the derivation, we start with a simpler case with m0 being deterministic and only spatially dependent, and derive the limiting radiative transfer equation by the Wigner transform in Section 2. In Section 3, we systematically introduce the derivation of the limiting equation for the varying-mass Schrödinger equation (1.1) with random heterogeneities. We present our numerical validation in Section 4 and make conclusive remarks in Section 5.

2 Wigner transform of VMSE in the deterministic setting

As a preparation, we first investigate the semi-classical limit for (1.1) with deterministic mass in this section, which is to consider:

The varying mass m0 is a real function of x. It is assumed to be deterministic and time-independent. We study the Cauchy problem, i.e., the uε is assumed to decay at infinite. uε is a complex function and we typically care about its physical observables such as the energy density ρε and the energy flux Jε, defined respectively as

Wigner transform is a technique explored in [25] for the Schrödinger equation with random potential, and has been demonstrated as a very powerful tool for investigating the semi-classical limit. It defines a function on the phase space:

. This definition is essentially the Fourier transform of

on the y variable.

The Wigner transform loses phase information: if uε is perturbed to uεeiS

, the Wigner transform is kept the same. However, the physical observables can be recovered, namely, the first and second moments of

It is not guaranteed that Wε is positive, and thus it does not serve directly as the energy density on the phase space. By plugging in the Schrödinger equation, we derives the equation satisfied by Wε in the following Lemma.

where the three operators are defined to be:

where the Fourier transform of m0 in space is defined by

The proof is direct derivation. Notice that

Since the two terms M1 and M2 are conjugate with y→−y for the second term, we only study the first one. With integration by parts:

We treat the I1 and I2 respectively in the following. Perform integration by parts again to I1

Note that I1 and the last term I13 can be combined so that a complete x−gradient of uε(x−ε2y)¯¯¯¯¯uε(x+ε2y) is available, namely one arrives at a formula for I1

On the other hand, integration by parts against ∇y¯¯¯¯¯uε(x+ε2y) gives

I22 and I′22 can be combined similarly

All the Ti terms can be explicitly expressed by the Wigner transform (2.2). In particular:

We use T1 as an example to show this. Recalling:

where we used the fact that

By the conjugate argument, one gets, setting p→−p:

[Formal] With certain regularity, the formal ε→0 limit of (2.4) is a transport equation:

The trajectory of particles follows:

This proposition essentially guarantees the positivity of the solution to the limiting equation (2.25).

We consider the VMSE where the effective mass involves random perturbation, namely:

where the effective mass is

While the leading order m0 is assumed to be deterministic and smooth, we allow the random perturbation m1(t,x) to present small scales at ε. Furthermore we assume it is mean-zero and stationary in both t and x with the correlation function R(t,x):

Taking the Fourier transform of the function in both time and space, one has:

then it is straightforward to show:

We dedicate this section to the derivation of the semi-classical limit of the equation above. We will show that In the zero limit of ε, the Wigner transform of uε, the solution to the VMSE (2.1) with varying random mass (3.2), solves the radiative transfer equation:

where the operators Qεi are defined in (2.5)-(2.7), and Pεi are their counterparts defined by m1: