The notion of semi-BCI algebras is introduced and some of its properties are investigated. This algebra is another generalization for BCI-algebras. It arises from the "intervalization" of BCI algebras. Semi-BCI have a similar structure to Pseudo-BCI algebras however they are not the same. In this paper we also provide an investigation on the similarity between these classes of algebras by showing how they relate to the process of intervalization. 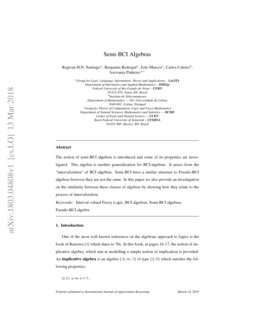 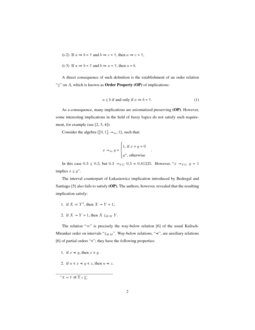 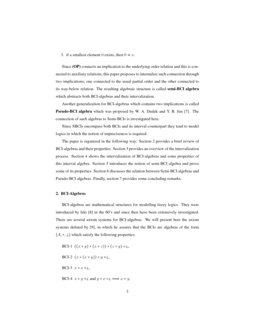 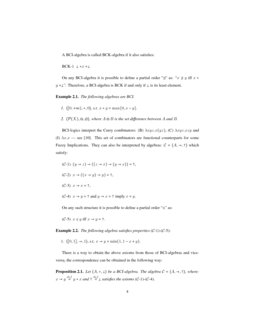 A direct consequence of such definition is the establishment of an order relation “≤” on A, which is known as Order Property (OP) of implications:

As a consequence, many implications are axiomatized preserving (OP). However, some interesting implications in the field of fuzzy logics do not satisfy such requirement, for example (see Bac2008Book ; PBSS18 ; Yager1980 ):

The interval counterpart of Łukasiewicz implication introduced by Bedregal and Santiago BS2013a also fails to satisfy (OP). The authors, however, revealed that the resulting implication satisfy:

Since (OP) connects an implication to the underlying order relation and this is connected to auxiliary relations, this paper proposes to internalize such connection through two implications; one connected to the usual partial order and the other connected to its way-below relation. The resulting algebraic structure is called semi-BCI algebra which abstracts both BCI-algebras and their intervalization.

Another generalization for BCI-algebras which contains two implications is called Pseudo-BCI algebra which was proposed by W. A. Dudek and Y. B. Jun Dudek . The connection of such algebras to Semi-BCIs is investigated here.

Since SBCIs encompass both BCIs and its interval counterpart they tend to model logics in which the notion of impreciseness is required.

BCI-algebras are mathematical structures for modelling fuzzy logics. They were introduced by Iséki Iseki1966 in the 60’s and since then have been extensively investigated. There are several axiom systems for BCI-algebras. We will present here the axiom systems defined by Hua06 , in which he assures that the BCIs are algebras of the form ⟨A,∗,⊥⟩ which satisfy the following properties:

On any BCI-algebra it is possible to define a partial order “⊴” as: “x⊴y iff x∗y=⊥”. Therefore, a BCI-algebra is BCK if and only if ⊥ is its least element.

The following algebras are BCI.

BCI-logics interpret the Curry combinators: (B) λxyz.x(yz), (C) λxyz.xzy and (I) λx.x — see hindley1986 . This set of combinators are functional counterparts for some Fuzzy Implications. They can also be interpreted by algebras: C=⟨A,→,⊤⟩ which satisfy:

On any such structure it is possible to define a partial order “⪯” as:

There is a way to obtain the above axioms from those of BCI-algebras and vice-versa, the correspondence can be obtained in the following way:

Since one kind of algebra can be obtained from the other and any result obtained for one can be easily translated, by duality, to the other, both structures are called BCI-algebras. This work consider the second kind of structure for our generalization. In this context, whenever x→⊤=⊤, i.e. x⪯⊤, the BCI-algebra C=⟨A,→,⊤⟩ will be called BCK-algebra. Now, let be some properties of BCI-algebras:

Properties 7, 5 and 3 model the combinators B, C and I of Combinatorial Logic hindley1986 .

Proof: (⇒) Straightforward because in BCK-algebras ⊤ is the greatest element, i.e. x⪯⊤ for each x∈A.

As stated in the Introduction, this paper shows that the behavior of the process of intervalization does not preserve (OP). In order to precisely define what does it mean, the next section introduces the concept of intervalization over abstract partial orders.

The limited capacity of machines to store just a finite set of finitely represented objects constraints the automatic calculation (computation) of structures in which a machine representation of some objects exceeds such capacity. In the case of real numbers, although most programs provide highly accurate results, it can happen that rounding errors built up during each step in the computation produce results which are not even meaningful. For more details see the early Forsythe’s report Forsythe1970 . In 1988, Siegfried Rump Rump1988 published the result of a computed function in an IBM S/370 mainframe. The function was:

One of the proposals to overcome this problem is due, almost simultaneously, to Ramon Moore Moore1959 ; MoorePhD and Teruo Sunaga Sunaga1958 . They developed the so-called interval arithmetic. Interval arithmetic is a set of operations on the set of all closed intervals I(R)={[a,b]:a,b∈R and a≤b}. The operations are defined in the following way:

“Correctness. The criterion for correctness of a definition of interval arithmetic is that the “Fundamental Theorem of Interval Arithmetic” holds IIIIIIMoore (Moo79, , Theorem 3.1, p. 21): If F is an inclusion monotonic interval extension of f, then →f(X1,...,Xn)⊆F(X1,...,Xn); where →f(X1,...,Xn)={f(x1,…,xn):xi∈Xi}.: when an expression is evaluated using intervals, it yields an interval containing all results of pointwise evaluations based on point values that are elements of the argument intervals. Optimality. By optimality, we mean that the computed floating-point interval is not wider than necessary.” Hickey et.al(Hic01, , p.1040)

The philosophy behind intervals is the following: Enclosure in intervals the values which are not exact by any reason (e.g. the value comes from an imprecise measurement) and apply correct and optimal operations on such intervals in order to obtain the best interval which contains the desired output. This approach will avoid what happened with the Rump’s example. Therefore, the notion of correctness is indispensable for such philosophy.

The property of correctness was investigated in 2006 by Santiago et al BSA2013 ; SBA06 . In those papers, instead of correctness the authors used the term representation, since an interval computation could be understood not just as a machine representation of real numbers, but also as a mathematical representation of real numbers (this idea is confirmed by the Representation Theorems of Euclidean continuous functions in BSA2013 ; SBA06 ). In what follows this notion is shown for binary operations: A binary interval operation, ⋄, represents a binary real operation, ⋄, whenever:

This can be easily extended to n-ary operations. The authors showed that this notion is more general than what is stated by the Fundamental Theorem of Interval Arithmetic; given that there are representations which are not inclusion monotonic (see (SBA06, , p. 238)).

The process of giving the correct and optimal interval version F for a function f is called: “intervalization”. There are many proposal of intervalization of algebraic structures further than that of real numbers proposed by Moore and Sunaga. In the literature, the reader can find proposals even for the field of Logic, since there are structures which interpret logics that are susceptible to the same situation of I(R). For example: The Łukasiewicz implicative algebra ⟨[0,1],→LK,0,1⟩ s.t. x→LKy=min(1,1−x+y) interprets some many-valued logics and was “intervalized” by Bedregal and Santiago in BS2013a . Its MV-algebra counterpart was intervalized by Cabrer et al in Cabrer2014 , also, in order to overcome the same problems already stated for I(R). In both cases, the interval algebras did not satisfy the same properties that are satisfied by the algebras that they came from. The same happened with I(R)!

The following section a way of “intervalizing’’ BCI-algebras is provided. Like the case of MVs and Łukasiewicz algebras the resulting structure does not belong to the same category of its starting algebra. This paper we provide an investigation of the resulting structures. In order to achieve that, some required concepts, like the abstract notion of intervals are introduced. The aim, again, is to provide the ability to use intervals to represent the elements of an algebra ⟨A,→⟩.

Since BCI-algebras are partially ordered systems, ⟨B,≤⟩, it is possible to apply Definition 3.1 to obtain the partial order ⟨B,≤km⟩. The question is about the implications on B: If an interval operation on B satisfies the BCI axioms, is it also correct? The following section will show that the answer is negative. But what does it mean? It means it is not possible to have both: (1) correctness and (2) the known theory of BCI-algebras for ⟨B,≤km⟩. So, since correctness is indispensable, a price must be paid: A new theory for ⟨B,≤km⟩ must be developed. This is the reason of this paper!

is also a BCI-algebra which satisfies (???).

Thus, clearly, the properties 3 to 5 are trivially satisfied. In the following, 1 is proved.

Proof: Case ⊤∉\downmodels. Then a→a=⊤∉\downmodels=[a,a]↣[a,a] and therefore ↣ is not an interval representation of →.

In the following, we propose a process for intervalization of BCI-algebras.

Then ⇒> is the best representation of → and the structure ⟨A,⇒>,⇒,[⊤,⊤]⟩ satisfies:

where X≪Y⟺X⇒>Y=[⊤,⊤] e X≾Y⟺X⇒Y=[⊤,⊤]. However, when A has at least one element different from ⊤, then ⟨A,⇒>,[⊤,⊤]⟩ is not a BCI-algebra.

Proof: According to Proposition 4.4 at BS2013a the operation ⇒> is the best representation of →. Note that: