Task oriented dialog systems typically first parse user utterances to semantic frames comprised of intents and slots. Previous work on task oriented intent and slot-filling work has been restricted to one intent per query and one slot label per token, and thus cannot model complex compositional requests. Alternative semantic parsing systems have represented queries as logical forms, but these are challenging to annotate and parse. We propose a hierarchical annotation scheme for semantic parsing that allows the representation of compositional queries, and can be efficiently and accurately parsed by standard constituency parsing models. We release a dataset of 44k annotated queries (fb.me/semanticparsingdialog), and show that parsing models outperform sequence-to-sequence approaches on this dataset. 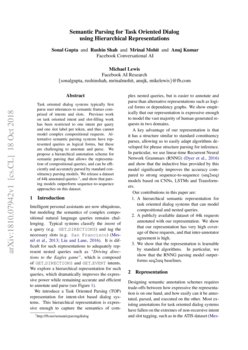 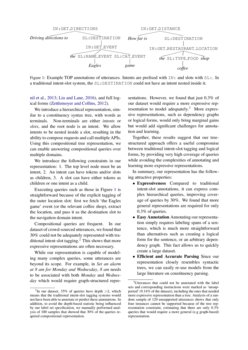 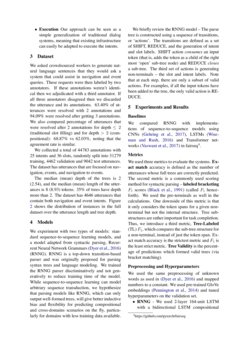 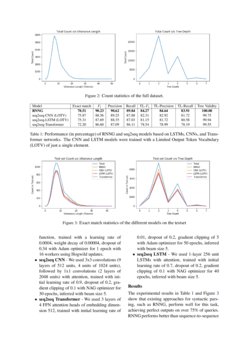 intent of a query (e.g. GET_DIRECTIONS) and tag the necessary slots (e.g. San Francisco) Mesnil et al. (2013); Liu and Lane (2016). It is difficult for such representations to adequately represent nested queries such as “Driving directions to the Eagles game”, which is composed of GET_DIRECTIONS and GET_EVENT intents. We explore a hierarchical representation for such queries, which dramatically improves the expressive power while remaining accurate and efficient to annotate and parse (see Figure 1).

A key advantage of our representation is that it has a structure similar to standard constituency parses, allowing us to easily adapt algorithms developed for phrase structure parsing for inference. In particular, we use linear-time Recurrent Neural Network Grammars (RNNG)

Dyer et al. (2016) and show that the inductive bias provided by this model significantly improves the accuracy compared to strong sequence-to-sequence (seq2seq) models based on CNNs, LSTMs and Transformers.

Our contributions in this paper are:

Designing semantic annotation schemes requires trade-offs between how expressive the representation is on one hand, and how easily can it be annotated, parsed, and executed on the other. Most existing annotations for task oriented dialog systems have fallen on the extremes of non-recursive intent and slot tagging, such as in the ATIS dataset Mesnil et al. (2013); Liu and Lane (2016), and full logical forms Zettlemoyer and Collins (2012).

We introduce a hierarchical representation, similar to a constituency syntax tree, with words as terminals. Non-terminals are either intents or slots, and the root node is an intent. We allow intents to be nested inside a slot, resulting in the ability to compose requests and call multiple APIs. Using this compositional tree representation, we can enable answering compositional queries over multiple domains.

We introduce the following constraints in our representation: 1. The top level node must be an intent, 2. An intent can have tokens and/or slots as children, 3. A slot can have either tokens as children or one intent as a child.

Executing queries such as those in Figure 1 is straightforward because of the explicit tagging of the outer location slot: first we fetch ‘the Eagles game’ event (or the relevant coffee shop), extract the location, and pass it as the destination slot to the navigation domain intent.

Compositional queries are frequent. In our dataset of crowd-sourced utterances, we found that 30% could not be adequately represented with traditional intent-slot tagging.222In our dataset, 35% of queries have depth \textgreater2, which means that the traditional intent-slot tagging systems would not have been able to annotate or predict these annotations. In addition, to avoid the depth-based statistic being influenced by our label set specification, we manually performed analysis of 100 samples that showed that 30% of the queries required compositional representation. This shows that more expressive representations are often necessary.

Utterances that could not be annotated with the label sets and corresponding instructions were marked as ‘unsupported’ (9.14% of the dataset), including the ones that needed more expressive representation than a tree. Analysis of a random sample of 120 unsupported utterances shows that only four instances cannot be supported because of the tree representation constraint, estimating that there are only 0.3% queries that would require a more general (e.g graph-based) representation.

More expressive representations, such as dependency graphs or logical forms, would only bring marginal gains but would add significant challenges for annotation and learning.

Together, these results suggest that our tree-structured approach offers a useful compromise between traditional intent-slot tagging and logical forms, by providing very high coverage of queries while avoiding the complexities of annotating and learning more expressive representations.

In summary, our representation has the following attractive properties:

We asked crowdsourced workers to generate natural language sentences that they would ask a system that could assist in navigation and event queries. These requests were then labeled by two annotators. If these annotations weren’t identical then we adjudicated with a third annotator. If all three annotators disagreed then we discarded the utterance and its annotations. 63.40% of utterances were resolved with 2 annotations and 94.09% were resolved after getting 3 annotations. We also compared percentage of utterances that were resolved after 2 annotations for depth ≤2 (traditional slot filling) and for depth >2 (compositional): 68.87% vs 62.03%, noting that the agreement rate is similar.

We collected a total of 44783 annotations with 25 intents and 36 slots, randomly split into 31279 training, 4462 validation and 9042 test utterances. The dataset has utterances that are focused on navigation, events, and navigation to events.

The median (mean) depth of the trees is 2 (2.54), and the median (mean) length of the utterances is 8 (8.93) tokens. 35% of trees have depth more than 2. The dataset has 4646 utterances that contain both navigation and event intents. Figure 2 shows the distribution of instances in the full dataset over the utterance length and tree depth.

We experiment with two types of models: standard sequence-to-sequence learning models, and a model adapted from syntactic parsing, Recurrent Neural Network Grammars Dyer et al. (2016) (RNNG). RNNG is a top-down transition-based parser and was originally proposed for parsing syntax trees and language modeling. We trained the RNNG parser discriminatively and not generatively to reduce training time of the model. While sequence-to-sequence learning can model arbitrary sequence transduction, we hypothesize that parsing models like RNNG, which can only output well-formed trees, will give better inductive bias and flexibility for predicting compositional and cross-domains scenarios on the fly, particularly for domains with less training data available.

We briefly review the RNNG model – The parse tree is constructed using a sequence of transitions, or ‘actions’. The transitions are defined as a set of SHIFT, REDUCE, and the generation of intent and slot labels. SHIFT action consumes an input token (that is, adds the token as a child of the right most ‘open’ sub-tree node) and REDUCE closes a sub-tree. The third set of actions is generating non-terminals – the slot and intent labels. Note that at each step, there are only a subset of valid actions. For examples, if all the input tokens have been added to the tree, the only valid action is REDUCE.

We used three metrics to evaluate the systems. Exact match accuracy is defined as the number of utterances whose full trees are correctly predicted. The second metric is a commonly used scoring method for syntactic parsing – labeled bracketing F1 scores Black et al. (1991) (called F1 henceforth). We used the pre-terminals as well in the calculations. One downside of this metric is that it only considers the token spans for a given non-terminal but not the internal structure. Tree sub-structures are rather important for task completion. Thus, we introduce a third metric, Tree-Labeled (TL) F1, which compares the sub-tree structure for a non-terminal, instead of just the token span. Exact match accuracy is the strictest metric and F1 is the least strict metric. Tree Validity is the percentage of predictions which formed valid trees (via bracket matching).

We used the same preprocessing of unknown words as used in Dyer et al. (2016) and mapped numbers to a constant. We used pre-trained GloVe embeddings Pennington et al. (2014)

and tuned hyperparameters on the validation set.

The experimental results in Table 1 and Figure 3 show that existing approaches for syntactic parsing, such as RNNG, perform well for this task, achieving perfect outputs on over 75% of queries. RNNG performs better than sequence-to-sequence models, especially in predicting exact trees, which is important for task completion. We present results for the CNN and LSTM models with an output terminal token vocabulary of just a single element (LOTV), which performed better than the regular token vocabulary (exact match accuracy of 75.63% and 68.39%, respectively). We believe LOTV makes the models focus on learning to predict the tree structure rather than to reproduce the input tokens. But we observed that this vocabulary reduction resulted in significantly poorer performance for the Transformer model.

Below we discuss how varying the beam size during inference affects accuracy. The seq2seq results in Table 1 are accuracy for the top prediction when a beam of size 5 was run and the RNNG results are for greedy inference. For RNNG, the accuracy of top prediction did not change much when a beam of size 5 was run. We also measured how often the correct tree annotation was in the top k predictions for the models when a beam of size k was run during inference, called as Top-k. For RNNG, Top-3 was 90.21 and Top-5 was 92.48, compared to 78.51 for k=1. For seq2seq-CNN, the Top-3 score was 88.08 and Top-5 score was 90.21. For seq2seq-LSTM, Top-3 was 86.55 and Top-5 was 88.76. We note that Top-5 is substantially higher than the accuracy of the top prediction. These top-k predictions could be used by a hypothesis ranker downstream, which can take into account agent capabilities.

While sequence-to-sequence models have shown strong parsing performance when trained on very large amounts of data Vinyals et al. (2015); in our setting the inductive bias provided by the RNNG model is crucial to achieving high performance. The model has several useful biases, such as guaranteeing a well-formed output tree, and shortening the dependencies between intents and their slots.

A further advantage of RNNG is that inference has linear time complexity, whereas seq2seq models are quadratic because attention is recomputed at every time step.

Many annotation schemes have previously been proposed for representing the semantics of natural language. We briefly compare our method with these.

Most work on task oriented dialog systems has focused on identifying a single user intent and then filling the relevant slots – for example, the representations used on the ATIS dataset Mesnil et al. (2013); Liu and Lane (2016); Zhu and Yu (2017) and in the Dialog State Tracking Challenge Williams et al. (2016). We showed that hierarchical representations with nested intents can improve coverage of requests in our domains.

The semantic parsing literature has focused on representing language with logical forms Liang (2016); Zettlemoyer and Collins (2012); Kwiatkowski et al. (2010). Logical forms are more expressive than our representation, as they are less tightly coupled to the input query, and can be executed directly. However, logical forms are difficult to annotate and no large-scale datasets are available.

Drawing on ideas from slot-filling and semantic parsing, we introduce a hierarchical generalization of traditional intents and slots that allows the representation of complex nested queries, leading to 30% higher coverage of user requests. We show that the representation can be annotated with high agreement. We are releasing a large dataset of annotated utterances at http://fb.me/semanticparsingdialog. The representation allows the use of existing constituency parsing algorithms, resulting in higher accuracy than sequence-to-sequence models.