Semantic Parsing based on Verbal Subcategorization

The aim of this work is to explore new methodologies on Semantic Parsing for unrestricted texts. Our approach follows the current trends in Information Extraction (IE) and is based on the application of a verbal subcategorization lexicon (LEXPIR) by means of complex pattern recognition techniques. LEXPIR is framed on the theoretical model of the verbal subcategorization developed in the Pirapides project. 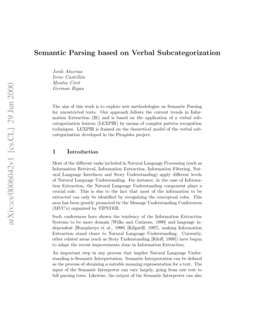 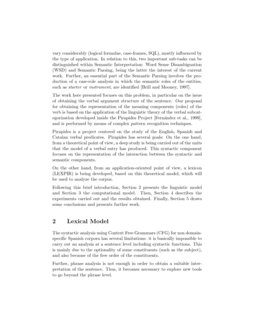 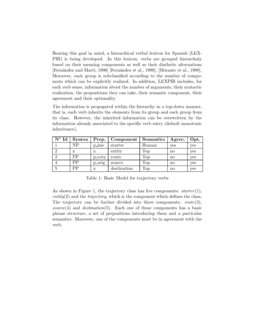 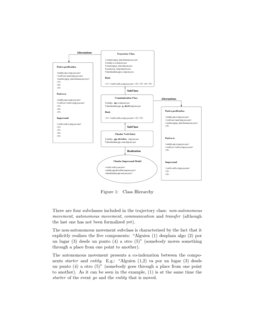 The work here presented focuses on this problem, in particular on the issue of obtaining the verbal argument structure of the sentence. Our proposal for obtaining the representation of the meaning components (roles) of the verb is based on the application of the linguistic theory of the verbal subcategorization developed inside the Pirapides Project [Fernández et al.1999], and is performed by means of complex pattern recognition techniques.

Pirapides is a project centered on the study of the English, Spanish and Catalan verbal predicates. Pirapides has several goals: On the one hand, from a theoretical point of view, a deep study is being carried out of the units that the model of a verbal entry has produced. This syntactic component focuses on the representation of the interaction between the syntactic and semantic components.

On the other hand, from an application-oriented point of view, a lexicon (LEXPIR) is being developed, based on this theoretical model, which will be used to analyze the corpus.

Following this brief introduction, Section 2 presents the linguistic model and Section 3 the computational model. Then, Section 4 describes the experiments carried out and the results obtained. Finally, Section 5 draws some conclusions and presents further work.

The syntactic analysis using Context Free Grammars (CFG) for non domain-specific Spanish corpora has several limitations: it is basically impossible to carry out an analysis at a sentence level including syntactic functions. This is mainly due to the optionality of some constituents (such as the subject), and also because of the free order of the constituents.

Further, phrase analysis is not enough in order to obtain a suitable interpretation of the sentence. Thus, it becomes necessary to explore new tools to go beyond the phrase level.

Bearing this goal in mind, a hierarchical verbal lexicon for Spanish (LEXPIR) is being developed. In this lexicon, verbs are grouped hierarchaly based on their meaning components as well as their diathetic alternations [Fernández and Martí1996] [Fernández et al.1999], [Morante et al.1998]. Moreover, each group is subclassified according to the number of components which can be explicitly realized. In addition, LEXPIR includes, for each verb sense, information about the number of arguments, their syntactic realization, the prepositions they can take, their semantic component, their agreement and their optionality.

The information is propagated within the hierarchy in a top-down manner, that is, each verb inherits the elements from its group and each group from its class. However, the inherited information can be overwritten by the information already associated to the specific verb entry (default monotonic inheritance).

The non-autonomous movement subclass is characterised by the fact that it explicitly realizes the five components: “Alguien (1) desplaza algo (2) por un lugar (3) desde un punto (4) a otro (5)” (somebody moves something through a place from one point to another).

The autonomous movement presents a co-indexation between the components starter and entity. E.g.: “Alguien (1,2) va por un lugar (3) desde un punto (4) a otro (5)” (somebody goes through a place from one point to another). As it can be seen in the example, (1) is at the same time the starter of the event go and the entity that is moved.

Finally, in the communication class there are only three components which are explicit: starter, which is at the same time the source, entity and destination). E.g.: “Alguien (1,4) dice algo (2) a alguien (5)” (somebody says something to somebody).

Moreover, specific verb forms can impose their own restrictions. For instance, “charlar” (to chat) is a verb which, in contradiction with the rest of the verbs in the communication class, does not accept an NP in the entity component and the PP must have the preposition “de/sobre” (about). Furthermore, it cannot take the prepositions “a/para” to express destination and uses the preposition “con” instead. E.g.: “Alguien (1) charla de algo (2) con alguien (5)” (somebody chats about something with somebody).

Finally, in order to obtain the alternation schemes for a verb, the information of the verb is composed with the alternations of the class. The different elements that appear on a model are explained below for a specific case: the basic model for the trajectory verbs (see Table 1).

Treating the optionality of the meaning components within the model itself allows us to reduce the number of possible alternations which have been established at a theoretical level (Pirapides takes the underspecification of a component as an alternation). Only that information which is different to the one association to the class is actually marked. For instance, in the Pasiva perifrástica model associated to the communication class (see Figure 1), the entity element (defined as {entity;NP;x;Top:yes;no}), has to be realized as an NP and also has to agree with the verb, which is not the usual case in the communication class.

Due to the richness of the language (adjuncts, free order, etc.) there is a need to apply robust pattern recognition techniques which allow to change the position of some elements, the absence of certain elements or the presence of new elements. The following subsections focus on the definition of the technique used for recognizing these complex structures within a sentence.

To avoid this problem it was decided to use a syntactic analysis based on syntactic unambiguous groups: chunks [Abney1991]. This turns the problem of comparing phrase structure trees into a problem of aligning phrase group sequences.

Our similarity measure is defined in terms of the minimum cost sequence of editing operations that transforms one structure into the other. The main differences with previous works on approximate pattern matching based on editing operations

[Tsong-li et al.1994], [Shasha et al.1994] is that the elements in our sequences are Feature Structures (FS). So the relabelling operation is performed on the attributes.

As a consequence, the following editing operations were defined:

The cost of a sequence of operations is the addition of the cost of each operation. In order to avoid having to choose the smallest model, a correction factor inversely proportional to the number of nodes is added to the similarity measure. It should be pointed out that the number of Relabel and Delete operations gives a measure of the goodness of the matching while the number of Insert operations measures how much information from the sentence is not captured by the pattern.

The experiments here presented aim to prove not only the feasibility of the linguistic and computational models but also the possibility to apply the system for improving and developing the verbal subcategorization lexicon (LEXPIR).

In order to carry out the experiments a preliminary version of LEXPIR was manually built, which contained 61 verbs belonging to the trajectory class. Then, 170 sentences taken from an Spanish newspaper were labelled by hand with the verbal models and the meaning components. It should be also mentioned that only three sentences present more than one model.

The corpus was pre-processed automatically to obtain a parsed tree for each sentence. Firstly, the corpus was morphologically analized MACO [Carmona et al.1998] and disambiguated Relax [Padró1998]). Secondly, the Spanish Wordnet [Rodríguez et al.1998] was used to semantically annotate the corpus with the 79 semantic labels defined in the preliminary version of EuroWordnet Top Ontology. Then, in order to obtain a partial parsing a context free parser based on charts TACAT and a wide coverage grammar of Spanish111Several rules were added to the grammar so as to deal with noun complements. [Castellón et al.1998] were used to obtain the partial parsing trees (see Figure 1). Finally, those parsed tree were used by our system to produce a case-role representation of the meaning components.

For instance, Figure 3 shows the feature structure of the meaning components obtained from the parsed tree shown in Figure 2.

The evaluation of a system which performs semantic interpretation is a difficult task. One of the contributions of the MUC’s has been to establish a set of evaluation metrics and a common frame for the evaluation of Information Extraction Systems. The MUC evaluation methodology is based on a pre-alignment of the entities from the solution and response.

However, in order to evaluate the results of our system, the existence of two main differences has to be taken into account: multiple instantiation and entity fragmentation.

Assuming the existence of only one correct instantiation of a model per sentence, our pre-alignment method consists in comparing all the answers of the same model with the corresponding solution. As in MUC-7, a role is correct if, and only if, both values are equal as strings.

Table 3 shows the results in the identification of the meaning components corresponding to verb arguments and applying the MUC-7 evaluation metrics (see Table 4). Further, Table 2 shows the results obtained on the identification of the verb model . It should be mentioned that due to errors in the pre-processing of the corpus, the system was unable to identify any model for 5 of the 170 sentences.

This paper has presented a semantic parsing approach for non domain-specific texts. Our approach is based on the application of a verbal subcategorization lexicon (LEXPIR) developed in the Pirapides project.

The results of the experiment are very promising. Even though they have been carried out using a limited corpus and lexicon, they have proved the feasibility of the linguistic and computational models.

As further work it is planned to cover linguistic phenomena other than the verbal subcategorization and to expand our system to deal with the combination of multiple models beyond the usual cascade approach. To design a more general framework, it has also been planned to formalize the role identification and model combination processes as a Consistency Labelling Problem [Pelillo and Refice1994, Padró1998] in which different nominal and verbal models can compete for their case-role assignments.