Generalized zero-shot learning (GZSL) is a technique to train a deep learning model to identify unseen classes using the attribute. In this paper, we put forth a new GZSL technique that improves the GZSL classification performance greatly. Key idea of the proposed approach, henceforth referred to as semantic feature extraction-based GZSL (SE-GZSL), is to use the semantic feature containing only attribute-related information in learning the relationship between the image and the attribute. In doing so, we can remove the interference, if any, caused by the attribute-irrelevant information contained in the image feature. To train a network extracting the semantic feature, we present two novel loss functions, 1) mutual information-based loss to capture all the attribute-related information in the image feature and 2) similarity-based loss to remove unwanted attribute-irrelevant information. From extensive experiments using various datasets, we show that the proposed SE-GZSL technique outperforms conventional GZSL approaches by a large margin. 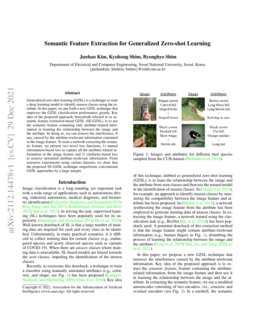 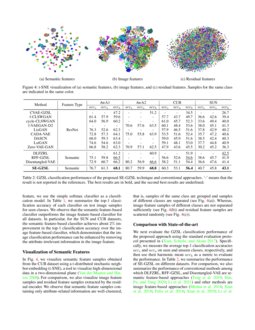 The goal of zero-shot learning (ZSL) is to train a model to classify sam...
Lu Liu, et al. ∙

Image classification is a long-standing yet important task with a wide range of applications such as autonomous driving, industrial automation, medical diagnosis, and biometric identification Fujiyoshi, Hirakawa, and Yamashita (2019); Ren, Hung, and Tan (2017); Ronneberger, Fischer, and Brox (2015); Sun et al. (2013)

. In solving the task, supervised learning (SL) techniques have been popularly used for its superiority

Simonyan and Zisserman (2014); He et al. (2016). Well-known drawback of SL is that a large number of training data are required for each and every class to be identified. Unfortunately, in many practical scenarios, it is difficult to collect training data for certain classes (e.g., endangered species and newly observed species such as variants of COVID-19). When there are unseen classes where training data is unavailable, SL-based models are biased towards the seen classes, impeding the identification of the unseen classes.

In this paper, we propose a new GZSL technique that removes the interference caused by the attribute-irrelevant information. Key idea of the proposed approach is to extract the semantic feature

, feature containing the attribute-related information, from the image feature and then use it in learning the relationship between the image and the attribute. In extracting the semantic feature, we use a modified autoencoder consisting of two encoders, viz.,

From extensive experiments using various benchmark datasets (AwA1, AwA2, CUB, and SUN), we demonstrate that the proposed approach outperforms the conventional GZSL techniques by a large margin. For example, for the AwA2 and CUB datasets, our model achieves 2% improvement in the GZSL classification accuracy over the state-of-the-art techniques.

Arjovsky, Chintala, and Bottou (2017) have been popularly used. By exploiting the generated image features of unseen classes as training data, a classification network identifying unseen classes can be trained in a supervised manner.

Our approach is conceptually similar to the generative model-based approach in the sense that we generate synthetic image features of unseen classes using the generative model. The key distinctive point of the proposed approach over the conventional approaches is that we use the features containing only attribute-related information in the classification to remove the interference, if any, caused by the attribute-irrelevant information.

Mathematically, the MI I(u,v) between two random variables u and v is defined as

is the joint probability density function (PDF) of

u and v, and p(u) and p(v) are marginal PDFs of u and v, respectively. In practice, it is very difficult to compute the exact value of MI since the joint PDF p(u,v) is generally unknown and the integrals in (1) are often intractable. To approximate MI, various MI estimators have been proposed Oord, Li, and Vinyals (2018); Cheng et al. (2020). Representative estimators include InfoNCE Oord, Li, and Vinyals (2018) and contrastive log-ratio upper bound (CLUB) Cheng et al. (2020), defined as

where f is a pre-defined score function measuring the compatibility between u and v, and p(v|u) is the conditional PDF of v given u

, which is often approximated by a neural network.

The relationship between MI, InfoNCE, and CLUB is given by

In extracting the semantic feature from the image feature, the proposed SE-GZSL technique uses the modified autoencoder architecture where two encoders, called semantic and residual encoders, are used in capturing the attribute-related information and the attribute-irrelevant information, respectively (see Fig 2). As mentioned, in the autoencoder training, we use two loss functions: 1) MI-based loss to encourage the semantic encoder to capture all attribute-related information and 2) similarity-based loss to encourage the semantic encoder not to capture attribute-irrelevant information. In this subsection, we discuss the overall training loss with emphasis on these two.

Since the computation of MI is not tractable, we use InfoNCE and CLUB (see (2) and (3)) as a surrogate of MI. In our approach, to minimize the objective function in (5), we express its upper bound using InfoNCE and CLUB and then train the autoencoder in a way to minimize the upper bound. Using the relationship between MI and its estimators in (4), the upper bound LMI of the objective function in (5) is

Let Ys be the set of seen classes, ac be the attribute of a seen class c∈Ys, and {x(i)c}Nci=1 be the set of training image features for the class c. Further, let z(i)c,s and z(i)c,r be the semantic and residual encoder outputs corresponding to the input image feature x(i)c, respectively, then LMI can be expressed as

where N=∑c∈YsNc is the total number of training image features.

We now discuss the similarity-based loss to enforce the semantic encoder not to capture any attribute-irrelevant information.

Using the fact that one can maximize A and minimize B at the same time by minimizing −log11+B/A=−logAA+B, we obtain the similarity-based loss as

By adding the conventional reconstruction loss Lrecon for the autoencoder, the MI-based loss LMI, and the similarity-based loss Lsim, we obtain the overall loss function as

Here, ˆx(i)c is the image feature reconstructed using the semantic and residual encoder outputs (z(i)c,s and z(i)c,r) in the decoder. When the training is finished, we only use the semantic encoder for the purpose of extracting the semantic feature.

from a random noise vector

ϵ∼N(0,I) and the image attribute ac (i.e., ˜xc=G(ϵ,ac)). Conventionally, WGAN is trained to minimize the Wasserstein distance between the distributions of real image feature xc and generated image feature ˜xc given by

where D is an auxiliary network (called critic), ˆxc=αxc+(1−α)˜xc (α∼U(0,1)), and λgp is the regularization coefficient (a.k.a., gradient penalty coefficient) Gulrajani et al. (2017). In our scheme, to make sure that the semantic feature ˜zc,s obtained from ˜xc is similar to the real semantic feature zc,s, we additionally use the following losses in the WGAN training:

We note that these losses are analogous to the losses with respect to the real semantic feature zc,s in (6) and (10), respectively. By combining (13), (14), and (15), we obtain the overall loss function as

By resampling the noise vector ϵ∼N(0,I), a sufficient number of synthetic semantic features can be generated.

and wy and by are weight and bias parameters of the softmax classifier to be learned.

In our experiments, we evaluate the performance of our model using four benchmark datasets: AwA1, AwA2, CUB, and SUN. The AwA1 and AwA2 datasets contain 50 classes of animal images annotated with 85 attributes Lampert, Nickisch, and Harmeling (2009); Xian, Schiele, and Akata (2017). The CUB dataset contains 200 species of bird images annotated with 312 attributes Welinder et al. (2010). The SUN dataset contains 717 classes of scene images annotated with 102 attributes Patterson and Hays (2012). In dividing the total classes into seen and unseen classes, we adopt the conventional dataset split presented in Xian, Schiele, and Akata (2017).

as a pre-trained classification network and fix it in our training process. We implement all the networks in SE-GZSL (semantic encoder, residual encoder, and decoder in the image feature decomposition network, and generator and critic in WGAN) using the multilayer perceptron (MLP) with one hidden layer as in

. We set the number of hidden units to 4096 and use LeakyReLU with a negative slope of 0.02 as a nonlinear activation function. For the output layer of the generator, the ReLU activation is used since the image feature extracted by ResNet is non-negative. As in

We next evaluate the GZSL classification performance of the proposed approach using the standard evaluation protocol presented in Xian, Schiele, and Akata (2017). Specifically, we measure the average top-1 classification accuracies accs and accu

on seen and unseen classes, respectively, and then use their harmonic mean

In training the semantic feature extractor, we have used the MI-based loss LMI and the similarity-based loss Lsim. To examine the impact of each loss function, we measure the performance of three different versions of SE-GZSL: 1) SE-GZSL trained only with the reconstruction loss Lrecon, 2) SE-GZSL trained with Lrecon and LMI, and 3) SE-GZSL trained with Lrecon, LMI, and Lsim. From the results in Table 3, we observe that the performance of SE-GZSL can be enhanced greatly by exploiting the MI-based loss LMI. In particular, for the AwA1 and CUB datasets, we achieve more than 5% improvement in the harmonic mean accuracy by utilizing LMI. Also, for the AwA2 dataset, we achieve about 4% improvement of the accuracy. One might notice that when LMI is not used, SE-GZSL performs worse than conventional image feature-based methods (see Table 2). This is because the semantic encoder cannot capture all the attribute-related information without LMI, and thus using the semantic encoder output in the classification incurs the loss of the attribute-related information. We also observe that the performance of SE-GZSL can be improved further by exploiting the similarity-based loss Lsim. For example, for the AwA2 dataset, more than 3% improvement in the harmonic mean accuracy can be achieved by utilizing Lsim.

This work was supported in part by the Samsung Research Funding & Incubation Center for Future Technology of Samsung Electronics under Grant SRFC-IT1901-17 and in part by the National Research Foundation of Korea (NRF) grant funded by the Korea government (MSIT) under Grant 2020R1A2C2102198.