A radical paradigm shift of wireless networks from “connected things” to “connected intelligence” undergoes, which coincides with the Shanno and Weaver's envisions: Communications will transform from the technical level to the semantic level. This article proposes a semantic communication method with artificial intelligence tasks (SC-AIT). First, the architecture of SC-AIT is elaborated. Then, based on the proposed architecture, we implement SC-AIT for a image classifications task. A prototype of SC-AIT is also established for surface defect detection, is conducted. Experimental results show that SC-AIT has much lower bandwidth requirements, and can achieve more than 40% classification accuracy gains compared with the communications at the technical level. Future trends and key challenges for semantic communications are also identified. 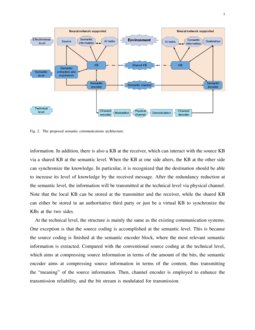 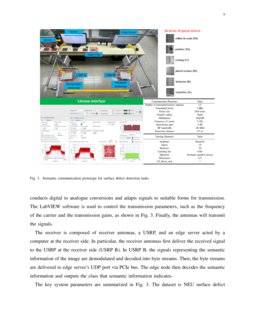 Nine Challenges in Artificial Intelligence and Wireless Communications for 6G

A Unified View on Semantic Information and Communication: A Probabilistic Logic Approach

Relationships between Software Architecture and Source Code in Practice: An Exploratory Survey and Interview

This paper provides an overview of the various projects carried out with...
Laurent Romary, et al. ∙

With the increasingly powerful intelligence capability, future wireless networks will transform from “connected things” to “connected intelligence” [2, 1, 3]. To adapt this new trend, the intelligent devices in future wireless networks should not only be able to accomplish complex smart applications, but also be utilized for more efficient, robust communications. Fortunately, this communication paradigm shift coincides with the Shanno and Weaver’s envisions for future communications. It is known that conventional wireless networks are based on Shannon’s classical information theory. Reviewing Shanno and Weaver’s seminal work [4], we can find that communications can be categorized into three levels 1) How accurately can the symbols of communication be transmitted? (The technical problem.); 2) How precisely do the transmitted symbols convey the desired meaning? (The semantic problem.); 3 How effectively does the received meaning affect conduct in the desired way? (The effectiveness problem.).

proposed a semantic communication system for text transmission based on deep learning. Based on

[8], the authors in [9] proposed a lite distributed semantic communication system for internet of thing (IoT) applications.

Even though the existing works are interesting, none of them considered the relations between the AI tasks and the semantic information. Actually, the semantic information is closely related to the target AI task. For instance, from Fig. 1, if the target of the transmission changes to detect the cat, the information related to the dog is no longer necessary. Therefore, semantic communication should take AI tasks into considerations.

The main contribution of this paper is a semantic communication paradigm with AI tasks (SC-AIT). First, we propose the semantic communication architecture for SC-AIT, in which the functions of the three communication levels are clearly identified. In particular, the effectiveness level mainly concerns with the source information, the desired conduct of the AI tasks, and forms a knowledge base (KB). The semantic level conducts semantic information extraction and coding based on KB and the neural networks. Then, following the design principles of the architecture, we accomplish SC-AIT for a classification task to show its feasibility. Next, an experimental prototype is established to implement SC-AIT for a surface defect detection task, and experimental results verify the efficiency of SC-AIT. We also summarize some open issues and challenges for future semantic communications. Finally, key points of this paper are concluded.

In the first subsection, we introduce the proposed architecture and mainly analyze the necessity and the function of AI task block for the overall semantic communications. The implementation details of the architecture will be elaborated in the next subsection. As shown in Fig. 2, the semantic communication architecture consists of the effectiveness level, the semantic level and the technical level [4], and each layer is closely interrelated to each other. At the effectiveness level, there is a source block, which contains the information to be transmitted. In this work, we assume that the target of the communications is to accomplish a certain AI task that is known by both transmitter and receiver [1]. The contained information, the AI tasks, and their inherent relations constitute a KB, which can be used to store the above information and instruct the following semantic communications. Since for different AI tasks, information can have different degrees of importance, it is necessary to introduce AI task in KB. For instance, as shown in Fig. 1, once the AI task becomes detecting the cat, the information related to dog is no longer necessary. Moreover, no matter whether the target is the dog or cat, the background information is not needed. Therefore, the effectiveness level needs to quantify the degrees of importance of semantic information for the accomplishment of AI tasks, so as to decide the parts of semantic information that should be transmitted. At the receiver, there is also a KB to store the knowledge including the related semantic information and AI tasks.

In this subsection, following the design principles of the proposed architecture, a study case of SC-AIT is implemented for image classification tasks based on convolutional neural networks (CNN). In particular, this subsection elaborates how to establish KB and how to investigate the underlaying relations between AI tasks and semantic information to instruct semantic communications.

Image classification is a fundamental AI task that has extensive applications such as surface defect detection in industrial internet, MNIST. In the considered classification tasks, the source typically contains a number of images, and they will be transmitted to the receiver for analysis. This is particularly suitable for IoT applications, where the transmitter sensors may have limited computation capability for accurate inferring. Following the architecture shown in Fig.

At the receiver, the destination first demodulates and channel decodes the received message. Fully-connected layers at the receiver act as the semantic decoder. By selecting the class corresponding to the maximum value in the output vector, the destination is able to determine which class the transmitted image belongs to. In this way, SC-AIT is completed for classification tasks.

In this section, we establish a semantic communication prototype to implement SC-AIT. In particular, the surface defect detection of hot-rolled steel strip is considered, which is an image classification task that has been extensively used in industrial IoT to replace subjective and repetitive process of manual inspection. Then, the performance of SC-AIT is evaluated and compared with baseline schemes based on conventional JPEG transmission and normal semantic communications (SC) without considering AI tasks.

Fig. 3 illustrates the established prototype. As shown in Fig. 3, we assume the transmitter is a sensor used to inspect surface defects. In particular, the transmitter is composed of a camera, a universal software radio peripheral (USRP), transmitter antennas. The camera acts as a source to capture the images of the hot-rolled steel strip for surface defects. Then, the images from the camera are delivered to the sensor. Here, sensor acts as an intelligent node used to inspect surface defects, and its function is achieved by a computer in our prototype. In particular, the sensor first extracts and codes the semantic information of the images according to the established source KB, and then modulates the signals at the technical level. The USRP at the transmitter side (USRP A) reads the byte streams from the User Datagram Protocol (UDP) port of the sensor via Peripheral Component Interconnect express (PCIe) bus. USRP is software-defined radios, which conducts digital to analogue conversions and adapts signals to suitable forms for transmission. The LabVIEW software is used to control the transmission parameters, such as the frequency of the carrier and the transmission gains, as shown in Fig. 3. Finally, the antennas will transmit the signals.

The key system parameters are summarized in Fig. 3. The dataset is NEU surface defect dataset222http://faculty.neu.edu.cn/yunhyan/NEU_surface_defect_database.html, which is suitable for industrial Internet scenarios. As shown in Fig. 3, six kinds of typical surface defects of the hot-rolled steel strip are collected in the dataset, i.e., rolled-in scale, patches, crazing, pitted surface, inclusion and scratches. The dataset includes 1800 grayscale images (300 samples for each kind), and the original resolution of each image is 200×200 pixels.

first compares the classification accuracy of SC-AIT and the conventional JPEG transmission scheme under different signal to noise ratios (SNRs). As shown in Fig.

4, compared with JPEG compressed scheme, the semantic communication can always obtain better performance. In particular, SC-AIT with CR=98% can still harvest more than 40% accuracy gains even at an aggressive compression ratio and 10 dB SNR when compared with the JPEG transmission scheme, since the top 2% most relevant semantic information is transmitted. We can also observe that the performance gain is more significant at low SNR regions. This is because the semantic communication system conducts in an end-to-end fashion and takes channel state information into the training. In contrast, the conventional JPEG transmission scheme has much worse bit error rate at low SNRs, leading to worse classification performance. Moreover, when CR=87%, there is almost no loss of classification accuracy when SNR varies. This indicates that SC-AIT can significantly reduce the redundant information without affecting the task performance.

Fig. 5 compares the performance of the proposed SC-AIT with a conventional JPEG transmission scheme and a normal semantic communication method without considering AI tasks (SC) under different bits per pixel (bpp). Here, different bpps indicates different bandwidth requirements of the communication methods. The lower the bpp is, the more extreme the source has to be compressed, and thus less bandwidth is required. In addition, since normal SC does not consider AI task, it tries to extract and transmit all the features. When the bpp constraint does not support transmitting all the feature maps, SC will randomly transmits parts of feature maps, as it does not consider the relations between the AI tasks and feature maps. In contrast, the proposed SC-AIT always transmits the most important parts of feature maps to satisfy different bpp constraints. As we can observe from Fig. 5, both SC-AIT and SC can achieve much lower bpps when compared with conventional JPEG transmission scheme. In particular, both the schemes can achieve convergent performance at 10−2 level of bpp. Moreover, we can also observe that SC-AIT can achieve more significant performance gains when bpp is extremely low (lower than 10−3). This is because SC-AIT chooses the most important feature maps for transmission, which are the semantic information closely related to the success of AI tasks.

Fig. 6 compares the complexity of SC-AIT and the baseline schemes in terms of the system runtime. In particular, the runtime includes transmission delay and process delay. The computers used for experiments are equipped with Intel(R) Xeon(R) Gold 6240 CPU @ 2.60GHz, 100G RAM, and Tesla V100 32G graphics card. As shown in Fig. 6

, the proposed SC-AIT have both lower process delay and transmission delay compared with the conventional JPEG transmissions. The total delay of SC-AIT is only 70% of the conventional JPEG transmission scheme. This is because the SC-AIT uses the feature extraction network to extract the semantic information of the image, which has lower complexity than that of the conventional, complex source coding. The total complexity is thus reduced. When the feature maps are further compressed by 87%, the transmission delay is further reduced by 21%. This is because the transmitted information is further compressed. Therefore, we can conclude that the semantic communication system has low complexity and is particularly suitable for delay-sensitive applications and systems with limited computation capability.

The above work can serve as basis for semantic communications that takes AI tasks into consideration. This section further summarizes some key challenges remaining in the research field, and sheds some light on future research opportunities.