Large datasets are well-known as a key to the recent advances in deep learning. However, dataset construction, especially for replay spoofing detection, requires the physical process of playing an utterance and re-recording it, which hinders the construction of large-scale datasets. To compensate for the limited availability of replay spoofing datasets, in this study, we propose a method for pre-training acoustic configurations using external data unrelated to replay attacks. Here, acoustic configurations refer to variables present in the process of a voice being uttered by a speaker and recorded through a microphone. Specifically, we select pairs of audio segments and train the network to determine whether the acoustic configurations of two segments are identical. We conducted experiments using the ASVspoof 2019 physical access dataset, and the results revealed that our proposed method reduced the relative error rate by over 37 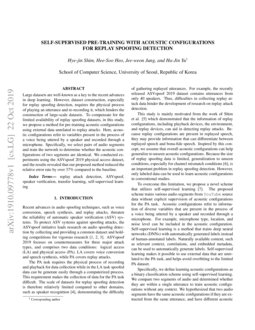 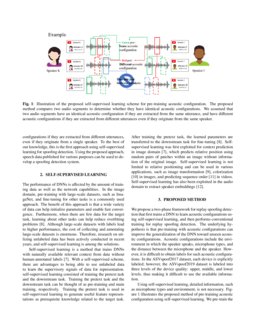 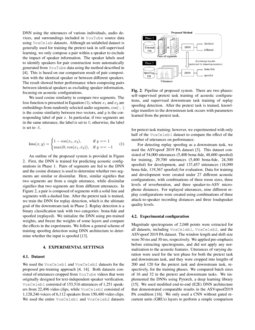 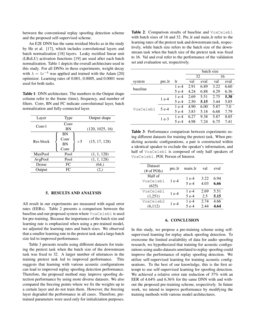 Towards robust audio spoofing detection: a detailed comparison of traditional and learned features

ASVspoof 2021: Towards Spoofed and Deepfake Speech Detection in the Wild

The PA task requires the physical process of recording and playback for data collection while in the LA task spoofed data can be generate easily through a computerized process. This requirement makes the collection of data for the PA task difficult. The scale of datasets for replay spoofing detection is therefore relatively limited compared to other domains, such as speaker recognition [4], demonstrating the difficulty of gathering replayed utterances. For example, the recently released ASVspoof 2019 dataset contains utterances from only 40 speakers. Thus, difficulties in collecting replay attack data hinder the development of research on replay attack detection.

To overcome this limitation, we propose a novel scheme that utilizes self-supervised learning [7]. The proposed scheme trains various audio segments from YouTube

source data without explicit supervision of acoustic configurations for the PA task. Acoustic configurations refer to information of diverse variables that are present in the process of a voice being uttered by a speaker and recorded through a microphone. For example, microphone type, location, and noise level can be included in the acoustic configuration. Self-supervised learning is a method that trains deep neural networks (DNNs) with automatically generated labels instead of human-annotated labels. Naturally available content, such as relevant context, correlations, and embedded metadata, can be used to automatically generate labels. Self-supervised learning makes it possible to use external data that are unrelated to the PA task, and helps avoid overfitting to the limited PA dataset.

The performance of DNNs is affected by the amount of training data as well as the network capabilities. In the image domain, pre-training with large-scale datasets, such as ImageNet, and fine-tuning for other tasks is a commonly used approach. The benefit of this approach is that a wide variety of data can help initialize parameters and enable fast convergence. Furthermore, when there are few data for the target task, learning about other tasks can help reduce overfitting problems

[8]. Although large-scale datasets with labels lead to higher performance, the cost of collecting and annotating large-scale datasets is enormous. Therefore, research on utilizing unlabeled data has been actively conducted in recent years, and self-supervised learning is among the solutions.

[10] in images, and predicting sequence order [11] in videos. Self-supervised learning has also been exploited in the audio domain to extract speaker embeddings [12].

Using self-supervised learning, detailed information, such as microphone types and environment, is not necessary. Figure 1 illustrates the proposed method of pre-training acoustic configuration using self-supervised learning. We pre-train the DNN using the utterances of various individuals, audio devices, and surroundings included in YouTube source data using VoxCeleb datasets. Although an unlabeled dataset is generally used for training the pretext task in self-supervised learning, we only compose a pair within a speaker to exclude the impact of speaker information. The speaker labels used to identify speakers for pair construction were automatically generated from YouTube data using the method described in [4]. This is based on our comparison result of pair composition with the identical speaker or between different speakers. The result showed better performance when composing pairs between identical speakers as excluding speaker information, focusing on acoustic configurations.

We used cosine similarity to compare two segments. The loss function is presented in Equation (1), where

x1 and x2 are embeddings from randomly selected audio segments, cos(⋅,⋅)

is the cosine similarity between two vectors, and

An outline of the proposed system is provided in Figure 2. First, the DNN is trained for predicting acoustic configurations in Phase 1. Pairs of segments are fed to the DNN and the cosine distance is used to determine whether two segments are similar or dissimilar. Here, similar signifies that two segments are from a single utterance, while dissimilar signifies that two segments are from different utterances. In Figure 2, a pair is composed of segments with a solid line and segments with a dashed line. After the pretext task is trained, we train the DNN for replay detection, which is the ultimate goal of the downstream task in Phase 2. Replay detection is a binary classification task with two categories: bona-fide and spoofed (replayed). We initialize the DNN using pre-trained weights, and freeze the weights of some layers and compare the effects in the experiments. We follow a general scheme of training spoofing detection using DNN architecture to determine whether the input is spoofed [13].

Magnitude spectrograms of 2,048 points were extracted for all datasets, including VoxCeleb1, VoxCeleb2

. We only used a CNN without gated recurrent units (GRUs) layers to perform a simple comparison between the conventional replay spoofing detection scheme and the proposed self-supervised scheme.

[19] are used after each batch normalization. Table 1 depicts the overall architecture used in this study. For all DNNs in these experiments, weight decay with λ=1e−4 was applied and trained with the Adam [20] optimizer. Learning rates of 0.001, 0.0005, and 0.0001 were used for both tasks.

All result in our experiments are measured with equal error rates (EERs). Table 2 presents a comparison between the baseline and our proposed system where VoxCeleb1 is used for pre-training. Because the importance of the batch size and learning rate is emphasized when using a pre-trained model, we adjusted the learning rates and batch sizes. We observed that a smaller learning rate in the pretext task and a large batch size led to improved performance.

Table 3 presents results using different datasets for training the pretext task when the batch size of the downstream task was fixed to 32. A larger number of utterances in the training pretext task led to improved performance. This suggests that learning with various acoustic configurations can lead to improved replay spoofing detection performance. Therefore, the proposed method may improve spoofing detection performance by using more diverse datasets. We also compared the freezing points where we fix the weights up to a certain layer and do not train them. However, the freezing layer degraded the performance in all cases. Therefore, pre-trained parameters were used only for initialization purposes.

In this study, we propose a pre-training scheme using self-supervised learning for replay attack spoofing detection. To overcome the limited availability of data for audio spoofing research, we hypothesized that training for acoustic configurations using audio datasets unrelated to replay spoofing could improve the performance of replay spoofing detection. We utilize self-supervised learning for training acoustic configurations. To the best of our knowledge, this is the first attempt to use self-supervised learning for spoofing detection. We achieved a relative error rate reduction of 37% with an EER of 4.64% and 6.36% for the same DNN with and without the proposed pre-training scheme, respectively. In future work, we intend to improve performance by modifying the training methods with various model architectures.