Existing models for extractive summarization are usually trained from scratch with a cross-entropy loss, which does not explicitly capture the global context at the document level. In this paper, we aim to improve this task by introducing three auxiliary pre-training tasks that learn to capture the document-level context in a self-supervised fashion. Experiments on the widely-used CNN/DM dataset validate the effectiveness of the proposed auxiliary tasks. Furthermore, we show that after pre-training, a clean model with simple building blocks is able to outperform previous state-of-the-art that are carefully designed. 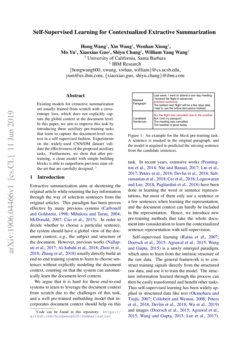 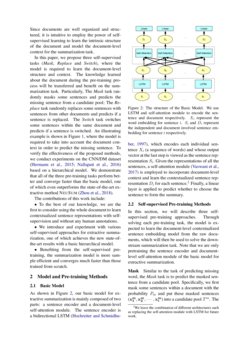 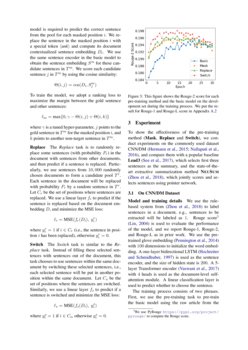 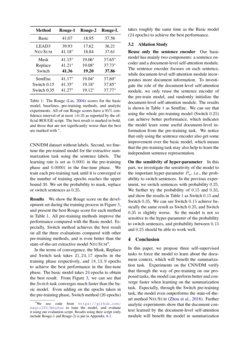 Extractive summarization aims at shortening the original article while retaining the key information through the way of selection sentences from the original articles. This paradigm has been proven effective by many previous systems Carbonell and Goldstein (1998); Mihalcea and Tarau (2004); McDonald (2007); Cao et al. (2015). In order to decide whether to choose a particular sentence, the system should have a global view of the document context, e.g., the subject and structure of the document. However, previous works Nallapati et al. (2017); Al-Sabahi et al. (2018); Zhou et al. (2018); Zhang et al. (2018) usually directly build an end-to-end training system to learn to choose sentences without explicitly modeling the document context, counting on that the system can automatically learn the document-level context.

In this paper, we propose three self-supervised tasks (Mask, Replace and Switch), where the model is required to learn the document-level structure and context. The knowledge learned about the document during the pre-training process will be transferred and benefit on the summarization task. Particularly, The Mask task randomly masks some sentences and predicts the missing sentence from a candidate pool; The Replace task randomly replaces some sentences with sentences from other documents and predicts if a sentence is replaced. The Switch task switches some sentences within the same document and predicts if a sentence is switched. An illustrating example is shown in Figure 1, where the model is required to take into account the document context in order to predict the missing sentence. To verify the effectiveness of the proposed methods, we conduct experiments on the CNN/DM dataset Hermann et al. (2015); Nallapati et al. (2016) based on a hierarchical model. We demonstrate that all of the three pre-training tasks perform better and converge faster than the basic model, one of which even outperforms the state-of-the-art extractive method NeuSum Zhou et al. (2018).

The contributions of this work include:

∙ To the best of our knowledge, we are the first to consider using the whole document to learn contextualized sentence representations with self-supervision and without any human annotations.

∙ We introduce and experiment with various self-supervised approaches for extractive summarization, one of which achieves the new state-of-the-art results with a basic hierarchical model.

∙ Benefiting from the self-supervised pre-training, the summarization model is more sample efficient and converges much faster than those trained from scratch.

As shown in Figure 2, our basic model for extractive summarization is mainly composed of two parts: a sentence encoder and a document-level self-attention module. The sentence encoder is a bidirectional LSTM Hochreiter and Schmidhuber (1997), which encodes each individual sentence Xi

Si. Given the representations of all the sentences, a self-attention module Vaswani et al. (2017) is employed to incorporate document-level context and learn the contextualized sentence representation Di for each sentence.222We leave the combination of different architectures such as replacing the self-attention module with LSTM for future work. Finally, a linear layer is applied to predict whether to choose the sentence to form the summary.

In this section, we will describe three self-supervised pre-training approaches. Through solving each pre-training task, the model is expected to learn the document-level contextualized sentence embedding model from the raw documents, which will then be used to solve the downstream summarization task. Note that we are only pretraining the sentence encoder and document-level self-attention module of the basic model for extractive summarization.

Similar to the task of predicting missing word, the Mask

task is to predict the masked sentence from a candidate pool. Specifically, we first mask some sentences within a document with the probability

by using the cosine similarity:

To train the model, we adopt a ranking loss to maximize the margin between the gold sentence and other sentences:

where yri=1 if i∈Cr (i.e., the sentence in position i has been replaced), otherwise yri=0.

We use the rule-based system from

Zhou et al. (2018) to label sentences in a document, e.g., sentences to be extracted will be labeled as 1. Rouge score333We use PyRouge https://pypi.org/project/pyrouge/ to compute the Rouge score. Lin (2004) is used to evaluate the performance of the model, and we report Rouge-1, Rouge-2, and Rouge-L as in prior work. We use the pre-trained glove embedding Pennington et al. (2014) with 100 dimensions to initialize the word embedding. A one-layer bidirectional LSTM Hochreiter and Schmidhuber (1997) is used as the sentence encoder, and the size of hidden state is 200. A 5-layer Transformer encoder Vaswani et al. (2017) with 4 heads is used as the document-level self-attention module. A linear classification layer is used to predict whether to choose the sentence.

The training process consists of two phrases. First, we use the pre-training task to pre-train the basic model using the raw article from the CNN/DM dataset without labels. Second, we fine-tune the pre-trained model for the extractive summarization task using the sentence labels. The learning rate is set as 0.0001 in the pre-training phase and 0.00001

in the fine-tune phase. We train each pre-training task until it is converged or the number of training epochs reaches the upper bound

30. We set the probability to mask, replace or switch sentences as 0.25.

We show the Rouge score on the development set during the training process in Figure 3, and present the best Rouge score for each method in Table 1. All pre-training methods improve the performance compared with the Basic model. Especially, Switch method achieves the best result on all the three evaluations compared with other pre-training methods, and is even better than the state-of-the-art extractive model NeuSum444We use code from https://github.com/magic282/NeuSum to train the model, and evaluate it using our evaluation script. Results using their script (only include Rouge-1 and Rouge-2) is put in Appendix A.1..

In the terms of convergence, the Mask, Replace and Switch task takes 21,24,17 epochs in the training phase respectively, and 18,13,9 epochs to achieve the best performance in the fine-tune phase. The basic model takes 24 epochs to obtain the best result. From Figure 3, we can see that the Switch task converges much faster than the basic model. Even adding on the epochs taken in the pre-training phase, Switch method (26 epochs) takes roughly the same time as the Basic model (24 epochs) to achieve the best performance.

Reuse only the sentence encoder

On the sensitivity of hyper-parameter

In this paper, we propose three self-supervised tasks to force the model to learn about the document context, which will benefit the summarization task. Experiments on the CNN/DM verify that through the way of pre-training on our proposed tasks, the model can perform better and converge faster when learning on the summarization task. Especially, through the Switch pre-training task, the model even outperforms the state-of-the-art method NeuSum Zhou et al. (2018). Further analytic experiments show that the document context learned by the document-level self-attention module will benefit the model in summarization task, and the model is not so sensitive to the hyper-parameter of the probability to switch sentences.

a.2 Rouge-1 and Rouge-L results

The Rouge-1 and Rouge-L results are shown in Figure 4, from which we can see that the Switch method achieves the best performance.