The aim of all Question Answering (QA) systems is to be able to generalize to unseen questions. Most of the current methods rely on learning every possible scenario which is reliant on expensive data annotation. Moreover, such annotations can introduce unintended bias which makes systems focus more on the bias than the actual task. In this work, we propose Knowledge Triplet Learning, a self-supervised task over knowledge graphs. We propose methods of how to use such a model to perform zero-shot QA and our experiments show considerable improvements over large pre-trained generative models. 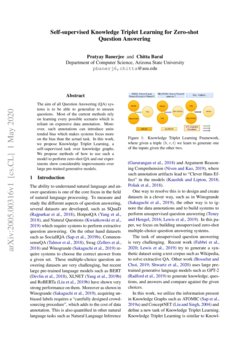 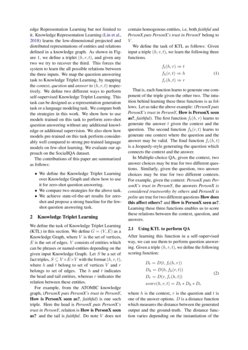 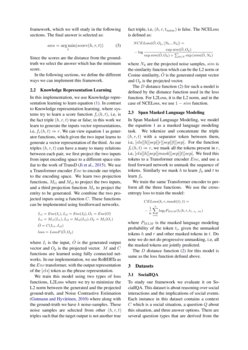 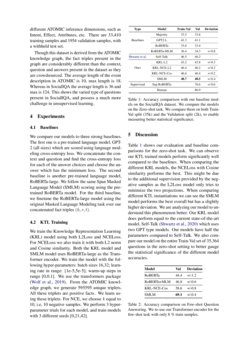 Knowledge Graph Question Answering Datasets and Their Generalizability: Are They Enough for Future Research?

The ability to understand natural language and answer questions is one of the core focus in the field of natural language processing. To measure and study the different aspects of question answering, several datasets are developed, such as SQuaD

One way to resolve this is to design and create datasets in a clever way, such as in Winogrande Sakaguchi et al. (2019), the other way is to ignore the data annotations and to build systems to perform unsupervised question answering Teney and Hengel (2016); Lewis et al. (2019). In this paper, we focus on building unsupervised zero-shot multiple-choice question answering systems.

Radford et al. (2019) to generate knowledge, questions, and answers and compare against the given choices.

learns the low-dimensional projected and distributed representations of entities and relations defined in a knowledge graph. As shown in Figure

1, we define a triplet (h,r,t), and given any two we try to recover the third. This forces the system to learn the all possible relations between the three inputs. We map the question answering task to Knowledge Triplet Learning, by mapping the context, question and answer to (h,r,t) respectively. We define two different ways to perform self-supervised Knowledge Triplet Learning. This task can be designed as a representation generation task or a language modeling task. We compare both the strategies in this work. We show how to use models trained on this task to perform zero-shot question answering without any additional knowledge or additional supervision. We also show how models pre-trained on this task perform considerably well compared to strong pre-trained language models on few-shot learning. We evaluate our approach on the SocialIQA dataset.

The contributions of this paper are summarized as follows:

We define the task of Knowledge Triplet Learning (KTL) in this section. We define G=(V,E) as a Knowledge Graph, where V is the set of vertices, E is the set of edges. V consists of entities which can be phrases or named-entities depending on the given input Knowledge Graph. Let S be a set of fact triples, S⊆V×E×V with the format (h,r,t), where h and t belong to set of vertices V and r belongs to set of edges. The h and t indicates the head and tail entities, whereas r indicates the relation between these entities.

We define the task of KTL as follows: Given input a triple (h,r,t), we learn the following three functions.

After learning this function in a self-supervised way, we can use them to perform question answering. Given a triple (h,r,t), we define the following scoring function:

where h is the context, r is the question and t is one of the answer options. D is a distance function which measures the distance between the generated output and the ground-truth. The distance function varies depending on the instantiation of the framework, which we will study in the following sections. The final answer is selected as:

Since the scores are the distance from the ground-truth we select the answer which has the minimum score.

In the following sections, we define the different ways we can implement this framework.

true or false; in this work we learn to generate the inputs vector representations, i.e,

fr(h,t)⇒r. We can view equation 1 as generator functions, which given the two input learns to generate a vector representation of the third. As our triples (h,r,t) can have a many to many relations between each pair, we first project the two inputs from input encoding space to a different space similar to the work of TransD Ji et al. (2015). We use a Transformer encoder Enc to encode our triples to the encoding space. We learn two projection functions, Mi1 and Mi2 to project the two inputs, and a third projection function Mo to project the entity to be generated. We combine the two projected inputs using a function C. These functions can be implemented using feedforward networks.

where Ii is the input, ^O is the generated output vector and Op is the projected vector. M and C functions are learned using fully connected networks. In our implementation, we use RoBERTa as the Enc transformer, with the output representation of the [cls] token as the phrase representation.

We train this model using two types of loss functions, L2Loss where we try to minimize the L2 norm between the generated and the projected ground-truth, and Noise Contrastive Estimation

Gutmann and Hyvärinen (2010) where along with the ground-truth we have k noise-samples. These noise samples are selected from other (h,r,t)

triples such that the target output is not another true fact triple, i.e,

where Nk are the projected noise samples, sim

is the similarity function which can be the L2 norm or Cosine similarity,

^O is the generated output vector and Op is the projected vector.

In Span Masked Language Modeling, we model the equation 1 as a masked language modeling task. We tokenize and concatenate the triple (h,r,t) with a separator token between them, i.e, [cls][h][sep][r][sep][t][sep]. For the function fr(h,t)⇒r, we mask all the tokens present in r, i.e, [cls][h][sep][mask][sep][t][sep]. We feed this tokens to a Transformer encoder Enc, and use a feed forward network to unmask the sequence of tokens. Similarly we mask h to learn fh and t to learn ft.

We train the same Transformer encoder to perform all the three functions. We use the cross-entropy loss to train the model:

is the masked language modeling probability of the token

The D distance function (2) for this model is same as the loss function defined above.

To study our framework we evaluate it on SocialIQA. This dataset is about reasoning over social interactions and the implications of social events. Each instance in this dataset contains a context C which is a social situation, a question Q about this situation, and three answer options. There are several question types that are derived from the different ATOMIC inference dimensions, such as Intent, Effect, Attributes, etc. There are 33,410 training samples and 1954 validation samples, with a withheld test set.

Though this dataset is derived from the ATOMIC knowledge graph, the fact triples present in the graph are considerably different than the context, question and answers present in the dataset as they are crowdsourced. The average length of the event description in ATOMIC is 10, max length is 18. Whereas in SocialIQA the average length is 36 and max is 124. This shows the varied type of questions present in SocialIQA, and possess a much more challenge in unsupervised learning.

We compare our models to three strong baselines. The first one is a pre-trained language model, GPT-2 (all sizes) which are scored using language modeling cross-entropy loss. We concatenate the context and question and find the cross-entropy loss for each of the answer choices and choose the answer which has the minimum loss. The second baseline is another pre-trained language model, RoBERTa-large. We follow the same Span Masked Language Model (SMLM) scoring using the pre-trained RoBERTa model. For the third baseline, we finetune the RoBERTa-large model using the original Masked Language Modeling task over our concatenated fact triples (h,r,t).

We train the Knowledge Representation Learning (KRL) model using both L2Loss and NCELoss. For NCELoss we also train it with both L2 norm and Cosine similarity. Both the KRL model and SMLM model uses RoBERTa-large as the Transformer encoder. We train the model with the following hyper-parameters: batch sizes 16,32; learning rate in range: [1e-5,5e-5]; warm-up steps in range [0,0.1]. We use the transformers package Wolf et al. (2019). From the ATOMIC knowledge graph, we generate 595595 unique triplets. All these triplets are positive facts. We learn using these triplets. For NCE, we choose k equal to 10, i.e, 10 negative samples. We perform 3 hyper-parameter trials for each model, and train models with 3 different seeds [0,21,42].

Table 1 shows our evaluation and baseline comparisons for the zero-shot task. We can observe our KTL trained models perform significantly well compared to the baselines. When comparing the different KRL models, the NCELoss with Cosine similarity performs the best. This might be due to the additional supervision provided by the negative samples as the L2Loss model only tries to minimize the two projections. When comparing different KTL instantiations we can see the SMLM model performs the best overall but has a slightly higher deviation. We are analyzing our model to understand this phenomenon better. Our KRL model does perform equal to the current state-of-the-art model, Self-Talk Shwartz et al. (2020) which uses two GPT type models. Our models have half the parameters compared to Self-Talk. We also compare our model on the entire Train-Val set of 35,364 questions in the zero-shot setting to better gauge the statistical significance of the different model accuracies.

Table 2 compares the different pre-trained Transformer encoders in the few-shot question answering task. We randomly sample three sets of 2,400 samples as training data from the training set. We train our models on these three sets and measure the validation set accuracy. We can see the Transformer encoder trained on KTL perform significantly better than the baseline models in this setting. This shows that encoders trained on KTL are able to learn with a few samples. We plan to continue analyzing our models and evaluate the KTL framework on different datasets.

6.2 Use of External Knowledge for Question Answering

Over the years there are several methods discovered to perform the task of knowledge representation learning, i.e., embedding entities and relations in knowledge graphs to low-dimensional continuous vector space. We mention few of them here, such as TransE Bordes et al. (2013) which views relations as a translation vector between head and tail entities, TransH Wang et al. (2014) which overcomes TransE’s inability to model complex relations, and TransD Ji et al. (2015) which aims to reduce the parameters by proposing two different mapping matrices for head and tail entities. For much detailed reading, we refer to this survey by Lin et al.. KRL has been used in various ways to generate natural answers Yin et al. (2016); He et al. (2017) and generate factoid questions Serban et al. (2016). In our work, we modify TransD and adapt it to our KTL framework to perform zero-shot QA.