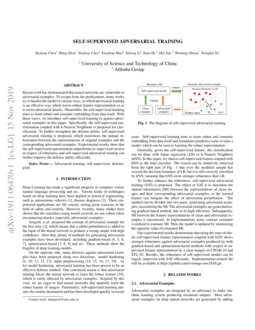 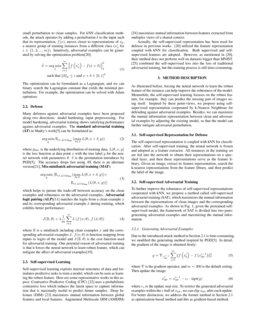 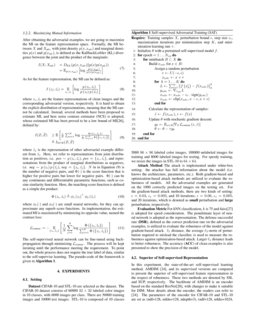 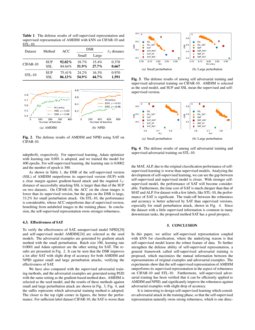 Deep Learning has made a significant progress in computer vision, natural language processing and etc. Various kinds of techniques based on deep learning have been applied in practical engineering, such as autonomous vehicles [3], disease diagnosis [16]

. These empowered applications are life crucial, raising great concerns in the field of safety and security. However, recently, many studies have shown that the classifiers using neural network are not robust when encountering attacks, especially adversarial examples.

Szegedy et al. proposed the concept of adversarial example for the first time [23], which means that a subtle perturbation is added to the input of the neural network to produce a wrong output with high confidence. After that, plenty of methods for generating adversarial examples have been developed, including gradient-based [5, 17, 4, 15], optimization-based [23, 18, 2] and etc. These methods show the fragility of deep learning models.

On the opposite side, many defenses against adversarial examples have been proposed along two directions: model hardening [5, 20, 14, 24, 28] ,input preprocessing [29, 22, 1, 11, 12]. As for model hardening, adversarial training has been proven to be an effective defense method. One convinced reason is that adversarial training forces the neural network to learn the robust feature [10], which is rarely affected by adversarial examples. Inspired by this view, we are eager to find neural networks that naturally learn the robust feature of images. Fortunately, self-supervised learning pursues the similar destination and has been developed quickly in recent years. Self-supervised learning aims to learn robust and semantic embedding from data itself and formulates predictive tasks to train a model, which can be seen as learning the robust representation.

1 that even the modified sample has crossed the decision boundary of LR, but it is still correctly classified by kNN, meaning that kNN owns stronger robustness than LR.

Our experimental results demonstrate that using the state-of-the-art self-supervised feature representation coupled with kNN shows stronger robustness against adversarial examples produced by both gradient-based and optimization-based methods with respect to supervised feature representation by a clear margin on CIFAR-10 and STL-10. Besides, the robustness of self-supervised models can be largely improved with SAT efficiently. Implementation-related file will be available at https://github.com/everange-ustc/SAT.git.

δ to the input such that its representation, f(x), moves closer to representations of xg, a nearest group of training instances from a different class (xig for i∈{1,2,...,m}). Intuitively, adversarial examples can be generated by solving the optimization problem[21]:

where ^pdata  is the underlying distribution of training data, L(θ,x,y)

is the loss function at data point

x with the true label y for the neural network with parameters θ. δ is the permutation introduces by PGD[17]. The accuracy drops fast using AT, there is an alternate version[26], Mix-minibatch adversarial training (MAT):

which helps to pursue the trade-off between accuracy on the clean examples and robustness on the adversarial examples. Adversarial logit pairing (ALP)[14]

matches the logits from a clean example

x and its corresponding adversarial example ~x during training, which exhibits better performance:

Self-supervised learning exploits internal structures of data and formulates predictive tasks to train a model, which can be seen as learning the robust feature. Here are some representative works in this aspect: Contrastive Predictive Coding (CPC) [19] uses a probabilistic contrastive loss which induces the latent space to capture information that is maximally useful to predict future samples. Deep Infomax (DIM) [8] maximizes mutual information between global features and local features. Augmented Multiscale DIM (AMDIM) [9]

maximizes mutual information between features extracted from multiples views of a shared context.

As illustrated before, forcing the neural network to learn the robust feature of the instance can help improve the robustness of the model. Meanwhile, the self-supervised learning focuses on the robust feature, for example. they can predict the missing part of images using itself. Inspired by these point-views, we propose using self-supervised representation cooperated by k-Nearest Neighbour for defending against adversarial examples. Besides, we can maximize the mutual information representation between clean and adversarial examples by adjusting the existing model, so that the model can further mitigate adversarial perturbation.

Due to the introduced attack method in Section 2.1 is time-consuming, we modified the generating method inspired by PGD[17]. In detail, the gradient of the image is obtained firstly:

where ∇ is the gradient operator, and m=300 is the default setting. Then update the image:

where ϵs is the update step size. To restrict the generated adversarial examples within the ϵ-ball of xadv, we can clip xadv after each update. For better distinction, we address the former method in Section 2.1 as optimization-based method and this as gradient-based method.

After obtaining the adversarial examples, we are going to maximize the MI on the feature representation space. Formally, the MI between X and Xadv, with joint density p(x,x\emphadv) and marginal densities p(x) and p(x\emphadv), is defined as the Kullback–Leibler (KL) divergence between the joint and the product of the marginals:

As for the feature representation, the MI can be defined as:

where zi,^zi are the feature representations of clean images and the corresponding adversarial version, respectively. It is hard to obtain the explicit distribution of representations, meaning that the MI cannot be calculated. Instead, several methods have been proposed to estimate MI, and here noise contrast estimator (NCE) is adopted, whose estimated MI has been proved to be a low bound of MI[25], defined by:

. Here, we refer to representations from joint distribution as positives, i.e.

\emphpos∼p(zi,^zi), \emphpos={zi,^zi}, and representations from the product of marginal distributions as negatives, i.e. \emphneg∼p(zi)p(^zj), \emphneg={zi,^zj}. N in in Equation (9) is the number of negative pairs, and Φ(⋅) is the score function that is higher for positive pairs but lower for negative pairs. Φ(⋅)

can be any continuous and differentiable parametric functions, such as cosine similarity function. Here, the matching score function is defined as a simple dot product:

where ϕ1(⋅) and ϕ2(⋅) are small neural networks, for they can approximate any superb score functions. In implementation, the estimated MI is maximized by minimizing its opposite value, named the contrast loss:

The self-supervised neural network can be fine-tuned using back-propagation through minimizing Lcontrast . The process will be kept iterating until the performance meeting the requirement. To point out, the whole process does not require the true label of data, similar to the self-supervise learning. The pseudo-code of the framework is given in Algorithm 1.

Attack Method The attack is implemented under white-box setting: the attacker has full information about the model (i.e. knows the architecture, parameters, etc.). Both gradient-based and optimization-based attack methods are utilized to evaluate the robustness of models. All the adversarial examples are generated on the 1000 correctly predicted images on the testing set. For the gradient-based attack methods, there are two kinds of setting: ϵ=0.03, ϵs=0.005, and 10 iterations; ϵ=0.06, ϵs=0.005, and 20 iterations, which is denoted as small perturbation and large perturbation, respectively.

Evaluation Metric For kNN classification, k is 75 and faiss[13] is adopted for speed consideration. The penultimate layer of neural network is adopted as the representation. The defense successful rate (DSR), defined as the correct prediction rate on the adversarial examples, is utilized to evaluate the robustness of the model against gradient-based attack. ℓ2 distance, the average ℓ2-norm of perturbation required to mislead the classifier, is used to measure the robustness against optimization-based attack. Larger ℓ2 distance leads to better robustness. The accuracy (ACC) of clean examples is also presented to show the precision of the model.

In this experiment, the state-of-the-art self-supervised learning method, AMDIM [9], and its supervised versions are compared to present the superior of self-supervised feature representation in the respect of robustness. These two methods are denoted by SSL and SUP, respectively. The backbone of AMDIM is an encoder based on the standard ResNet[6], with changes to make it suitable for DIM. More details about the encoder, the readers can refer to [9]. The parameters of the encoder for CIFAR-10 and STL-10 are set as (ndf=128, nrkhs=128, ndepth=3), (ndf=128, nrkhs=1024, ndepth=8), respectively. For supervised learning, Adam optimizer with learning rate 0.001 is adopted, and we trained the model for 400 epochs. For self-supervised learning, the learning rate is 0.0002 and the number of epoch is 300.

To verify the effectiveness of SAT, unsupervised model NPID[27] and self-supervised model AMDIM[9] are selected as the seed models. The adversarial examples are generated by gradient attack method with the small perturbation. Batch size 100, learning rate 0.0001 and Adam optimizer are the other setting for SAT. The results are presented in Fig. 2. It can be seen that the DSR improves a lot after SAT with slight drop of accuracy for both AMDIM and NPID against small and large perturbation attacks, verifying the effectiveness of SAT.

We have also compared with the supervised adversarial training methods, and the adversarial examples are generated using PGD with the same setting as the gradient-based method does. AMDIM is selected as the seed model, and the results of these methods against small and large perturbation attack are shown in Fig. 3, Fig. 4, and the suffix represents which adversarial training method is adopted. The closer to the top right corner in figures, the better the performance. For sufficient label dataset CIFAR-10, the SAT is worse than the MAT, ALP, due to the original classification performance of self-supervised learning is worse than supervised models. Analyzing the development of self-supervised learning, we can see the gap between self-supervised and supervised model is closer. With stronger self-supervised model, the performance of SAT will become considerable. Furthermore, the time cost of SAT is much cheaper than that of MAT and ALP. For dataset with a few labels, like STL-10, the performance of SAT is significant. The trade-off between the robustness and accuracy is better achieved by SAT than supervised versions, especially for small perturbation attack, shown in Fig. 4. Since the dataset with a little supervised information is common in many downstream tasks, the proposed method SAT has a good prospect.

It is interesting to design self-supervised learning which considers adversarial attack in the training phase, so that the self-supervised representation naturally owns strong robustness, which is one direction of our future work.