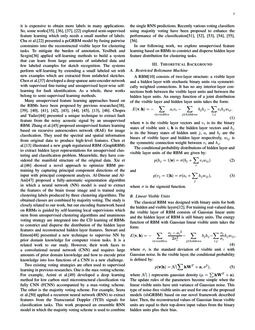 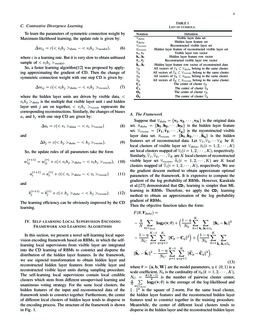 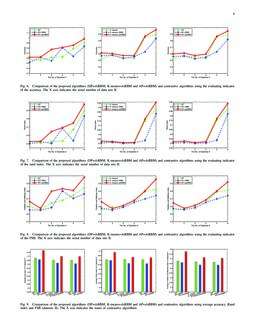 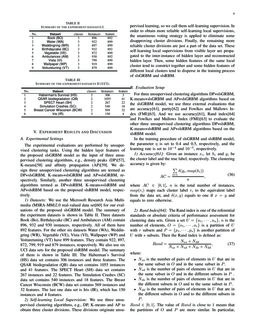 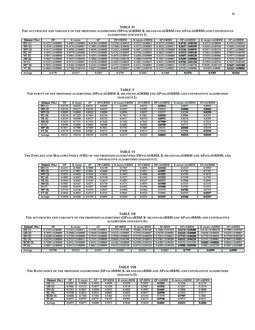 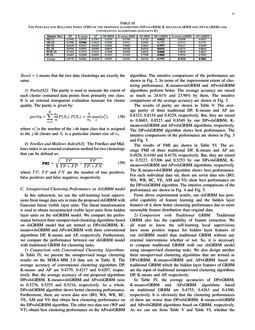 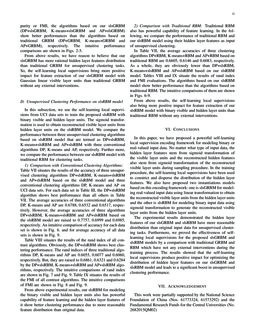 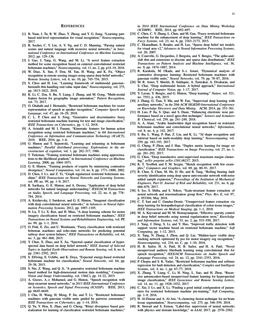 Feature extraction is currently the subject of intense research because of its wide applications. In many applications, like visual recognition[1], scene analysis[2], [3], object recognition[4], multimodal learning[5], [6], speech recognition[7], image classification[8] and activity recognition[9], feature learning is not only an essential phase but a crucial procedure which is used to simplify the subsequent tasks by obtaining appropriate features distribution from the input data.

Many modeling paradigms such as autoencoders and energy-based models have been applied to feature learning. The restricted Boltzmann machine (RBM)

[10] is a popular energy-based model for unsupervised feature learning and aims to explore appropriate hidden features. The structure of an RBM is a bipartite graph consists of a binary visible layer and a binary hidden layer. There are no connections between the interior of visible layer units and the interior of hidden layer units. The most popular learning algorithms of RBM such as stochastic maximum likelihood[11] and contrastive divergence (CD)[12] base on the efficient Gibbs sampling. There are a large number of successful applications based on the RBMs, e.g., speaker recognition[7], feature fusion[6], clustering[13], natural language understanding[14], classification[15], [16], [17], [18], [19]

. The hidden representations of traditional RBMs do not have explicit instance-level constraints. So, Chu et al. presented semi-supervised pcGRBM that pairwise constraints are fused into the reconstructed visible layer

[22]. However, the labeled data is lacking in many applications and it is expensive to obtain more labels. So, it is certainly worth exploring unsupervised feature learning method of RBMs by fusing external interventions. To obtain suitable feature distribution is a difficult task in machine learning, especially for unsupervised learning. In our previous research[22], we have explored semi-supervised feature extraction based on GRBM. In this paper, we explore further unsupervised feature extraction based on RBMs to constrict and disperse hidden layer feature distribution for clustering tasks. Some self-learning local supervisions from visible layer are integrated into the contrastive divergence (CD) learning in the hidden layer and reconstructed hidden layer, then we propose a novel encoding framework. The self-learning local supervisions stem from unsupervised learning and unanimous voting strategy. They are fused into hidden layer features and reconstructed hidden layer features. Under such a framework, we propose two instantiation models: one is self-learning local supervision GRBM (slsGRBM) with Gaussian linear visible units and binary hidden units for modeling real-valued data and the other is self-learning local supervision RBM (slsRBM) with binary visible units and hidden units using different transformations for visible layer reconstruction. The contributions of our work are summarized below.

The remaining of the paper is organized as follows. The related work is provided in Section II. In Section III, the theoretical background is described. The self-learning local supervisions encoding framework and the learning algorithm of two instantiation models slsGRBM and slsRBM are proposed in Section IV. The experimental results are shown in Section V. Finally, our contributions are summarized in Section VI.

In this section, we review literature on supervised, semi-supervised, unsupervised feature learning based on RBMs and other models, together with the voting strategy in supervised learning.

proposed a Multimodal Discriminative CRBMs (MMDCRBMs) model based on a Conditional RBMs (an extension of the RBM). Its training process is composed of training each modality using labeled data and training a fusion layer. For multi-modality deep learning, Bu et al.

[33] developed a supervised 3D feature learning framework in which a RBM is used to mine the deep correlations of different modalities. Cheng et al.[34] presented a novel duplex metric learning (DML) framework for feature learning and image classification. The main task of DML is to learn an effective hidden layer feature of a discriminative stacked autoencoder (DSAE). In the feature space of the DSAE, similar and dissimilar samples are mapped close to each other and further apart, respectively. This framework is the most related work to our study, but it belongs to supervised feature learning with a DSAE by layer-wisely imposing metric learning method and it is applied to image classification tasks. However, supervision information, e.g., labels, is scarce and it is expensive to obtain more labels in many applications. So, some works[35], [36], [37], [22] explored semi-supervised feature learning which only needs a small number of labels. Chu et al.[22] presented a pcGRBM model by fusing pairwise constraints into the reconstructed visible layer for clustering tasks. To mitigate the burden of annotation, Yesilbek and Sezgin[36] applied self-learning methods to build a system that can learn from large amounts of unlabeled data and few labeled examples for sketch recognition. The systems perform self-learning by extending a small labeled set with new examples which are extracted from unlabeled sketches. Chen et al.[37]

developed a deep sparase auto-encoder network with supervised fine-tuning and unsupervised layer-wise self-learning for fault identification. As a whole, these works belong to semi-supervised learning methods.

Many unsupervised feature learning approaches based on the RBMs have been proposed by previous researches[38], [39], [40], [41], [42], [43], [44], [45], [13], [46]. Chopra and Yadav[44] presented a unique technique to extract fault feature from the noisy acoustic signal by an unsupervised RBM. Zhang et al.[45] proposed unsupervised feature learning based on recursive autoencoders network (RAE) for image classfication. They used the spectral and spatial information from original data to produce high-level features. Chen et al.[13] illustrated a new graph regularized RBM (GraphRBM) to extract hidden layer representations for unsupervised clustering and classification problem. Meanwhile, they have considered the manifold structure of the original data. Xie et al.[46]

proposed a fully-automatic segmentation algorithm in which a neural network (NN) model is used to extract the features of the brain tissue image and is trained using clustering labels produced by three clustering algorithms. The obtained classes are combined by majority voting. The study is closely related to our work, but our encoding framework based on RBMs is guided by self-learning local supervisions which stem from unsupervised clustering algorithms and unanimous voting strategy are integrated into the CD learning of RBMs to constrict and disperse the distribution of the hidden layer features and reconstructed hidden layer features. Stewart and Ermon

presented a new technique to supervise NN by prior domain knowledge for computer vision tasks. It is a related work to our study. However, their work faces to a convolutional neural network (CNN) and requires large amounts of prior domain knowledge and how to encode prior knowledge into loss functions of a CNN is a new challenge.

applied a recurrent neural network (RNN) to extract features from the Transcranial Doppler (TCD) signals for classification tasks. This work proposed an ensemble RNN model in which the majority voting scheme is used to combine the single RNN predictions. Recently various voting classifiers using majority voting have been proposed to enhance the performance of the classification

is the visible layer vectors and

The conditional probability distributions of hidden layer and visible layer units of the RBM are given by:

is the standard deviation of visible unit

i with Gaussian noise. In the visible layer, the conditional probability is defined by:

To learn the parameters of symmetric connection weight by Maximum-likelihood learning, the update rule is given by:

where ε is a learning rate. But it is very slow to obtain unbiased sample of <vihj>model. So, a faster learning algorithm[12] was proposed by applying approximating the gradient of CD. Then the change of symmetric connection weight with one step CD is given by:

where the hidden layer units are driven by visible data, <vihj>data is the multiple that visible layer unit i and hidden layer unit j are on together, <vihj>recon represents the corresponding reconstructions. Similarly, the changes of biases ai and bj with one step CD are given by:

So, the update rules of all parameters take the form

The learning efficiency can be obviously improved by the CD learning.

In this section, we present a novel self-learning local supervision encoding framework based on RBMs, in which the self-learning local supervisions from visible layer are integrated into the CD learning of RBMs to constrict and disperse the distribution of the hidden layer features. In the framework, we use sigmoid transformation to obtain hidden layer and reconstructed hidden layer features from visible layer and reconstructed visible layer units during sampling procedure. The self-learning local supervisions contain local credible clusters which stem from different unsupervised learning and unanimous voting strategy. For the same local clusters, the hidden features of the input and reconstructed data of the framework tends to constrict together. Furthermore, the center of different local clusters of hidden layer tends to disperse in the encoding process. The structure of the framework is shown in Fig. 1.

Suppose that Vdata={v1,v2,⋯,vN} is the original data set. Hdata={h1,h2,⋯,hN} is the hidden layer feature set. Vrecon={˜v1,˜v2,⋯,˜vp} is the reconstructed visible layer data set. Hrecon={˜h1,˜h2,⋯,˜hq} is the hidden features set of reconstructed data. Let V1,V2,⋯VK be K local clusters of visible layer set Vdata, Hi(i=1,2,⋯,K) are local clusters mapped of Vi(i=1,2,⋯,K), respectively. Similarly, ˜V1,˜V2,⋯,˜VK are K local clusters of reconstructed visible layer set Vrecon, ˜Hi(i=1,2,⋯,K) are K local clusters mapped of ˜Vi(i=1,2,⋯,K), respectively. We use the gradient descent method to obtain approximate optimal parameters of the framework. It is expensive to compute the gradient of the log probability of RBMs. However, Karakida et al.[27] demonstrated that {CD}1 learning is simpler than ML learning in RBMs. Therefore, we apply the {CD}1 learning method to obtain an approximation of the log probability gradient of RBMs. Then the objective function takes the form:

where θ={a,b,W} are the model parameters, η∈(0,1) is a scale coefficient, Nh is the cardinality of Hk(k=1,2,⋯,K), NC=K(K−1)2 is the number of pairwise cluster center, ηN∑v∈Vdatalogp(v;θ) is the average of the log-likelihood and ∥⋅∥2 is the square of 2-norm. For the same local cluster, the hidden layer features and the reconstructed hidden layer features tend to constrict together in the training procedure. Meanwhile, the center of different local clusters tends to disperse in the hidden layer and the reconstructed hidden layer. Let

Then the objective function is as follows:

Then we can obtain:

From above result, we can see that the following task is how to compute ∂(hs−ht)T∂wij, ∂(hs−ht)∂wij, ∂(Cp−Cq)T∂wij and ∂(Cp−Cq)∂wij. Next, all of them are solved separately.

Obviously, σ(b+vsW) is a row vector, all components of which are independent of wij except j component. So,

Because ∂σ(bj+n∑i=1vsiwij)∂wij=hsj(1−hsj)vsi, the final result of ∂σ(b+vsW)∂wij has an expression as follows:

Similarly, the expression of final result of ∂σ(b+vtW)∂wij is as follows:

Then, the final result of ∂(hs−ht)T∂wij is a column vector:

Using above same solution, we can obtain:

So, the final result of ∂Ldata(θ)∂bj is as follows.

Similarly, the expression of ∂Lrecon(θ)∂bj is as follows.

Because ∂σ(bj+n∑i=1vsiwij)∂ai=0 and ∂σ(bj+n∑i=1vtiwij)∂ai=0, the final result of ∂σ(b+vsW)∂ai=0 and ∂σ(b+vtW)∂bj=0. Then we can obtain: ∂Ldata(θ)∂ai=0,∂Lrecon(θ)∂ai=0. Finally, following the {CD}1 learning and the gradient of the Ldata and Lrecon, the update rules of the symmetric connection weight take the form

The update rules of biases bj take the form

and the update rules of biases ai take the form