We suggest an efficient algorithm for the selection of sparse subsets of a set of influence for the numerical discretization of differential operators on irregular nodes with polynomial consistency of a given order with the help of the QR decomposition of an appropriately weighted polynomial collocation matrix, and prove that the accuracy of the resulting numerical differentiation formulas is comparable with that of the formulas generated on the original set of influence. 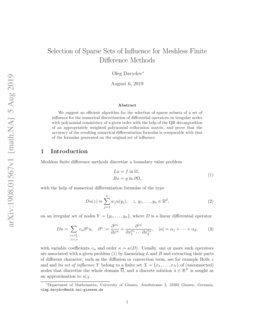 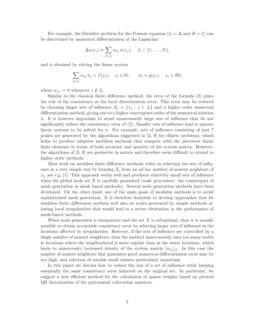 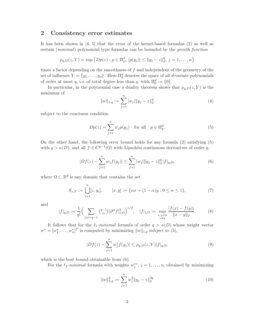 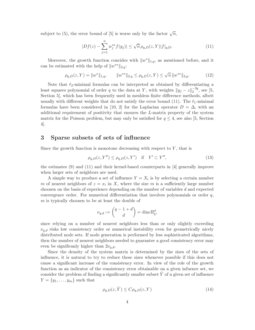 with the help of numerical differentiation formulas of the type

on an irregular set of nodes Y={y1,…,yn}, where D is a linear differential operator

with variable coefficients cα and order κ=κ(D). Usually, one or more such operators are associated with a given problem (1) by linearizing L and B and extracting their parts of different character, such as the diffusion or convection term, see for example Both z and and its set of influence Y belong to a finite set X={x1,…,xN} of (unconnected) nodes that discretize the whole domain ¯¯¯¯Ω, and a discrete solution ^u∈RN is sought as an approximation to u|X.

For example, the Dirichlet problem for the Poisson equation (L=Δ and B=I) can be discretized by numerical differentiation of the Laplacian

and ^u obtained by solving the linear system

Similar to the classical finite difference method, the error of the formula (2) plays the role of the consistency or the local discretization error. This error may be reduced by choosing larger sets of influence Xi={xj:j∈Ji} and a higher order numerical differentiation method, giving rise to a higher convergence order of the numerical solution ^u. It is however important to avoid unnecessarily large sets of influence that do not significantly reduce the consistency error of (2). Smaller sets of influence lead to sparser linear systems to be solved for ^u. For example, sets of influence consisting of just 7 points are generated by the algorithms suggested in [3, 9] for elliptic problems, which helps to produce adaptive methless methods that compete with the piecewise linear finite elements in terms of both accuracy and sparsity of the system matrix. However, the algorithms of [3, 9] are geometric in nature and therefore seem difficult to extend to higher order methods.

Most work on meshless finite difference methods relies on selecting the sets of influence in a very simple way by forming Xi from an ad hoc number of nearest neighbors of xi, see e.g. [1]. This approach works well and produces relatively small sets of influence when the global node set X is carefully generated (node generation: the counterpart of mesh generation in mesh based methods). Several node generation methods have been developed. On the other hand, one of the main goals of meshless methods is to avoid sophisticated mesh generation. It is therefore desirable to develop approaches that let meshless finite differences perform well also on nodes generated by simple methods allowing local irregularities that would lead to a severe diteriation in the performance of mesh-based methods.

When node generation is inexpensive and the set X is suboptimal, then it is usually possible to obtain acceptable consistency error by selecting larger sets of influence in the locations affected by irregularities. However, if the sets of influence are controlled by a single number of nearest neighbors, then the method unneccesarily uses too many nodes in locations where the neighborhood is more regular than in the worst locations, which leads to unneccesary increased density of the system matrix [wij]ij. In this case the number of nearest neighbors that guarantee good numerical differentiation error may be too high, and selection of sutable small subsets particularly important.

In this paper we discuss how to reduce the size of a set of influence while keeping essentially the same consistency error achieved on the original set. In particular, we suggest a new efficient method for the calculation of sparse weights based on pivoted QR factorization of the polynomial collocation matrices.

It has been shown in [4, 5] that the error of the kernel-based formulas (2) as well as certain (minimal) polynomial type formulas can be bounded by the growth function

times a factor depending on the smoothness of f and independent of the geometry of the set of influence Y={y1,…,yn}. Here Πdq denotes the space of all d-variate polynomials of order at most q, i.e. of total degree less than q, with Πd0:={0}.

In particular, in the polynomial case a duality theorem shows that ρq,D(z,Y) is the minimum of

subject to the exactness condition

On the other hand, the following error bound holds for any formula (2) satisfying (5) with q>κ(D), and all f∈Cq−1(Ω) with Lipschitz continuous derivatives of order q,

where Ω⊂Rd is any domain that contains the set

which is the best bound obtainable from (6).

, as mentioned before, and it can be estimated with the help of

Note that ℓ2-minimal formulas can be interpreted as obtained by differentiating a least squares polynomial of order q to the data at Y, with weights ∥yj−z∥−2q2, see [5, Section 5], which has been frequently used in meshless finite difference methods, albeit usually with different weights that do not satisfy the error bound (11). The ℓ1-minimal formulas have been considered in [10, 2] for the Laplacian operator D=Δ, with an additional requirement of positivity that ensures the L-matrix property of the system matrix for the Poisson problem, but may only be satisfied for q≤4, see also [5, Section 4].

3 Sparse subsets of sets of influence

Since the growth function is monotone decreasing with respect to Y, that is

the estimates (9) and (11) and their kernel-based counterparts in [4] generally improve when larger sets of neighbors are used.

A simple way to produce a set of influence Y=Xi is by selecting a certain number m of nearest neighbors of z=xi in X, where the size m is a sufficiently large number choosen on the basis of experience depending on the number of variables d and expected convergence order. For numerical differentiation that involves polynomials or order q, m is typically choosen to be at least the double of

since relying on a number of nearest neighbors less than or only slightly exceeding νq,d risks low consistency order or numerical instability even for geometrically nicely distributed node sets. If node generation is performed by less sophisticated algorithms, then the number of nearest neighbors needed to guarantee a good consistency error may even be significanly higher than 2νq,d.

Since the density of the system matrix is determined by the sizes of the sets of influence, it is natural to try to reduce these sizes whenever possible if this does not cause a significant increase of the consistency error. In view of the role of the growth function as an indicator of the consistency error obtainable on a given infuence set, we consider the problem of finding a significantly smaller subset ~Y of a given set of influence Y={y1,…,ym} such that

for some small constant C≥1.

) because this optimization problem can be interpeted as a linear program, see

[5, Section 4] for more details. The papers [10, 2] have applied so obtained sparse positive formulas and subsets ~Y in the meshless finite difference method.

Moreover, ℓ1-minimal formulas are often of even smaller size than νq,d if the set Y allows this, for example if d=2, D=Δ, q=3 or 4, z∈Y, and Y contains a sufficiently localized 5-star subset centered at z. In this case classical 5-point stencil of the finite difference method is automatically recovered.

Unfortunately, ℓ1-minimal formulas are relatively expensive to compute and numerical methods for them are not always reliable. Therefore we suggest an alternative, significantly more efficient method of selecting a sparse subset ~Y⊂Y satisfying (14) with a constant C estimated in Theorem 1.

We assume without loss of generality that

In particular, after an appropriate translation and scaling of the coordinate system of Rd the monomial basis

may be used since the growth function is scale invariant [5, Section 2], see also a discussion of the scalability of numerical diffrentiation formulas in [5, 6].

which is consistent if and only if ρq,D(z,Y)<∞ [5, Theorem 9]. Typically (but not necessarily) m≥ν. An efficient method for computing a sparse solution of a consistent linear system is to employ the QR factorization of A with column pivoting, see [7, Section 12.2.1]. It produces w with at most rank(A)

[11]. Applied to A directly, this method however does not seem to produce useful sets of influence for mesless finite difference methods.

We assume that ρq,D(z,Y)<∞ such that (16) has at least one solution. If z≠y1, then we transform the linear system Aw=b in the form

and compute a QR factorization of ~A with column pivoting,

where P is a permutation matrix, Q

an orthogonal matrix and

A1∈Rr×r is upper triangular and nonsingular, with r:=rank(~A)=rank(A) [7, Section 5.4.1]. Let s be the largest index of the nonzero components of QTb, such that

Since (16) is consistent, the last ν−r components of QTb must be zero, hence s≤r. We rewrite ~AP in the form

with an upper triangular and nonsingular matrix R1. Then the equation ~Av=b is equivalent to

where in this case

The rank of the matrix A is independent of the choice of the basis p1,…,pν of Πdq, and we denote it rq(Y). The following theorem provides a bound of the type (14) for the subset Y∘.

Assume that ρq,D(z,Y)<∞. Let Y∘⊂Y be constructed with the help of a pivoted QR factorization as described above, and let w∘ denote the corresponding weght vector. Then

The condition T~v2=0 is equivalent to ~v2=S^v for a suitable ^v∈Rℓ, where the columns of S form an orthonormal basis for the null space N(T) of T, and ℓ is the dimension of N(T). In particular, ~v∗∗2=S^v∗∗. Hence (19) is equivalent to

Let now z=y1. By the same arguments we obtain the estimate

which implies that the ℓ2-minimal weight vector w∗∗ that minimizes