This report presents the approach used in the submission of the LVIS Challenge 2020 of team MMDet. In the submission, we propose Seesaw Loss that dynamically rebalances the penalty to each category according to a relative ratio of cumulative training instances between different categories. Furthermore, we propose HTC-Lite, a light-weight version of Hybrid Task Cascade (HTC) which replaces the semantic segmentation branch by a global context encoder. Seesaw Loss improves the strong baseline by 6.9 split. With a single model, and without using external data and annotations except for standard ImageNet-1k classification dataset for backbone pre-training, our submission achieves 38.92 LVIS v1 benchmark. 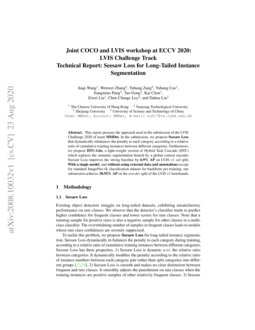 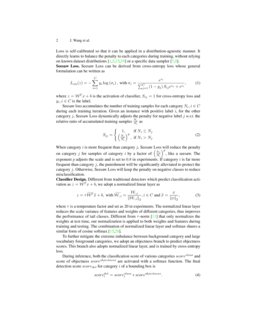 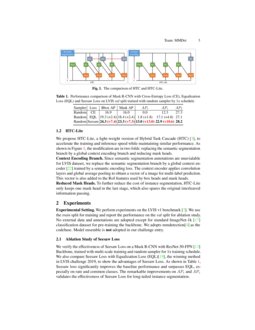 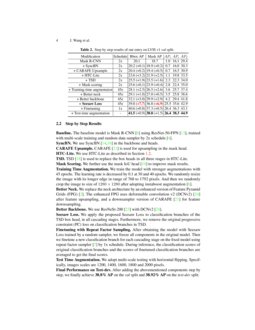 Cascade is a classic yet powerful architecture that has boosted performa...
Kai Chen, et al. ∙

In this work, we introduce Panoptic-DeepLab, a simple, strong, and fast ...
Bowen Cheng, et al. ∙

In this paper, we are committed to designing a high-performance network ...
Zhi Chen, et al. ∙

Existing object detectors struggle on long-tailed datasets, exhibiting unsatisfactory performance on rare classes. We observe that the detector’s classifier tends to predict higher confidence for frequent classes and lower scores for rare classes. Note that a training sample for positive class is also a negative sample for other classes in a multi-class classifier. The overwhelming number of samples in frequent classes leads to models whose rare class confidences are severely suppressed.

To tackle this problem, we propose Seesaw Loss for long-tailed instance segmentation. Seesaw Loss dynamically re-balances the penalty to each category during training, according to a relative ratio of cumulative training instances between different categories. Seesaw Loss has three properties. 1) Seesaw Loss is dynamic the relative ratio between categories. It dynamically modifies the penalty according to the relative ratio of instance numbers between each category pair rather than split categories into different groups [12, 19]. 2) Seesaw Loss is smooth and makes no clear distinction between frequent and rare classes. It smoothly adjusts the punishment on rare classes when the training instances are positive samples of other relatively frequent classes. 3) Seesaw Loss is self-calibrated so that it can be applied in a distribution-agnostic manner. It directly learns to balance the penalty to each categories during training, without relying on known dataset distributions [1, 5, 15, 19] or a specific data sampler [7, 9].

Seesaw Loss. Seesaw Loss can be derived from cross-entropy loss whose general formulation can be written as

where z=\cWTx+b is the activation of classifier, Sij=1 for cross-entropy loss and yi,i∈C is the label.

Seesaw loss accumulates the number of training samples for each category Ni,i∈C during each training iteration. Given an instance with positive label i, for the other category j, Seesaw Loss dynamically adjusts the penalty for negative label j the relative ratio of accumulated training samples NjNi as

Classifier Design. Different from traditional detectors which predict classification activation as z=\cWTx+b, we adopt a normalized linear layer as

is a temperature factor and set as 20 in experiments. The normalized linear layer reduces the scale variance of features and weights of different categories, thus improves the performance of tail classes. Different from

τ-norm [11] that only normalizes the weights at test time, our normalization is applied to both weights and features during training and testing. The combination of normalized linear layer and softmax shares a similar form of cosine softmax [15, 20].

To further mitigate the extreme imbalance between background category and large vocabulary foreground categories, we adopt an objectness branch to predict objectness scores. This branch also adopts normalized linear layer, and is trained by cross-entropy loss.

During inference, both the classification score of various categories scoreclass and score of objectness scoreobjectness are activated with a softmax function. The final detection score scoredet for category i of a bounding box is

We propose HTC-Lite, a light-weight version of Hybrid Task Cascade (HTC) [3], to accelerate the training and inference speed while maintaining similar performance. As shown in Figure 1, the modification are in two folds: replacing the semantic segmentation branch by a global context encoding branch and reducing mask heads.

trained by a semantic encoding loss. The context encoder applies convolution layers and global average pooling to obtain a vector of a image for multi-label prediction. This vector is also added to the RoI features used by box heads and mask heads.

Reduced Mask Heads. To further reduce the cost of instance segmentation, HTC-Lite only keeps one mask head in the last stage, which also spares the original interleaved information passing.

Experimental Setting. We perform experiments on the LVIS v1 benchmark [7]. We use the train split for training and report the performance on the val split for ablation study. No external data and annotations are adopted except for standard ImageNet-1k [17] classification dataset for pre-training the backbone. We adopts mmdetection[4] as the codebase. Model ensemble is not adopted in our challenge entry.

We verify the effectiveness of Seesaw Loss on a Mask R-CNN with ResNet-50-FPN [13] Backbone, trained with multi-scale training and random sampler for 1x training schedule. We also compare Seesaw Loss with Equalization Loss (EQL)[19], the winning method in LVIS challenge 2019, to show the advantages of Seesaw Loss. As shown in Table 1, Seesaw loss significantly improves the baseline performance and surpasses EQL, especially on rare and common classes. The remarkable improvements on APr and APc validates the effectiveness of Seesaw Loss for long-tailed instance segmentation.

CARAFE Upsample. CARAFE [21] is used for upsampling in the mask head.

TSD. TSD [18] is used to replace the box heads in all three stages in HTC-Lite.

Mask Scoring. We further use the mask IoU head [10] to improve mask results.

We train the model with stronger augmentations with 45 epochs. The learning rate is decreased by 0.1 at 30 and 40 epochs. We randomly resize the image with its longer edge in range of 768 to 1792 pixels. And then we randomly crop the image to size of

Better Neck. We replace the neck archtecture by an enhanced version of Feature Pyramid Grids (FPG) [2]. The enhanced FPG uses deformable convolution v2 (DCNv2) [24] after feature upsampling, and a downsampler version of CARAFE [21] for feature downsampling.

Final Performance on Test-dev. After adding the abovementioned components step by step, we finally achieve 38.8% AP on the val split and 38.92% AP on the test-dev split.