In this paper, we will present a new PoW consensus algorithm used in Seele's main-net, MPoW (Matrix-Proof-of-Work). Compared to Bitcoin's PoW consensus algorithm, MPoW requires miners to compute the determinants of submatrices from a matrix constructed with n hashes other than brute-force-hashing using a hash function to find the target. This paper will evaluate this algorithm's compatibility with difficulty adjustment. Then we will discuss its efficiency in countering machines with hashrate advantage, and its feasibility to personal computers. We believe more innovative consensus protocols can be developed based on this algorithm. 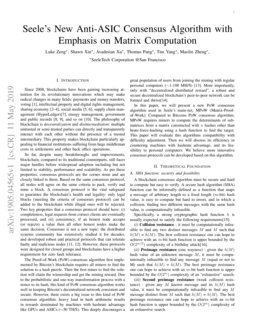 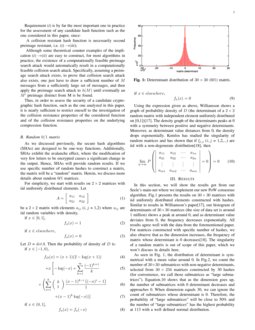 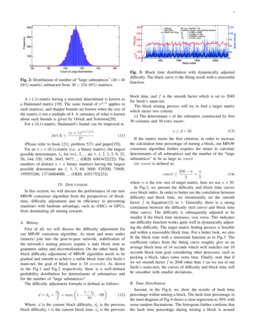 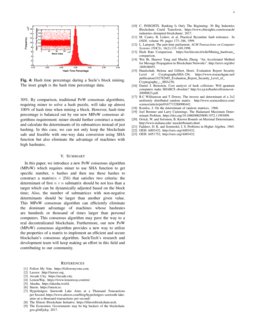 Consensus mechanism is the heart of any blockchain network. Many project...
Thuat Do, et al. ∙

In this paper, the authors propose to increase the efficiency of blockch...
Tosin P. Adewumi, et al. ∙

Since 2008, blockchains have been gaining increasing attention for its revolutionary innovations which may make radical changes in many fields: payments and money transfers, voting [1], intellectual property and digital rights management, sharing economy [2, 3, 4], social media [5, 6], supply chain management (HyperLedger)[7], energy management, government and public records [8, 9], and so on [10]. The philosophy of blockchain is decentralization and disintermediation: multiple untrusted or semi-trusted parties can directly and transparently interact with each other without the presence of a trusted intermediary. This property makes blockchain particularly appealing to financial institutions suffering from huge middleman costs in settlements and other back office operations.

So far, despite many breakthroughs and improvements, blockchain, compared to its traditional counterparts, still faces major hurdles before widespread adoption including but not limited to stability, performance and scalability. As per these properties, consensus protocols are the corner stone and are closely linked to them. Based on the same consensus protocol, all nodes will agree on the same criteria to pack, verify and mine a block. A consensus protocol is the vital safeguard to guarantee the blockchain’s health and legality: only legal blocks (meeting the criteria of consensus protocol) can be added to the blockchain while illegal ones will be rejected. Two key properties that a consensus protocol should have: (i) completeness, legal requests from correct clients are eventually processed, and (ii) consistency, if an honest node accepts (or rejects) a value then all other honest nodes make the same decision. Consensus is not a new topic: the distributed systems community has extensively studied it for decades, and developed robust and practical protocols that can tolerate faulty and malicious nodes [11, 12]. However, these protocols were designed for closed groups and blockchains have a higher requirement for zero fault tolerance.

The Proof-of-Work (PoW) consensus algorithm first implemented by Bitcoin’s blockchain requires all miners to find the solution to a hash puzzle. Then the first miner to find the solution will claim the winnership and get the mining reward. Due to the probabilistic and one-way transformation process with a nonce to its hash, this kind of PoW consensus algorithm works well in keeping Bitcoin’s decentralized network consistent and secure. However, there exists a big issue to this kind of PoW consensus algorithm: heavy load in hash arithmetic results in rewards dominated by machines with hashrate advantage like GPUs and ASICs (∼50 TH/S). This deeply discourages a great population of users from joining the mining with regular personal computers (∼1-100 MH/S) [13]. More importantly, only with “decentralized distributed reward”, a robust and secure decentralized blockchain’s peer-to-peer network can be formed and thrive[14].

In this paper, we will present a new PoW consensus algorithm used in Seele’s main-net, MPoW (Matrix-Proof-of-Work). Compared to Bitcoin’s PoW consensus algorithm, MPoW requires miners to compute the determinants of submatrices from a matrix constructed with n hashes other than brute-force-hashing using a hash function to find the target. This paper will evaluate this algorithm’s compatibility with difficulty adjustment. Then we will discuss its efficiency in countering machines with hashrate advantage, and its feasibility to personal computers. We believe more innovative consensus protocols can be developed based on this algorithm.

A blockchain consensus algorithm must be secure and hard to compute but easy to verify. A secure hash algorithm (SHA) function can be informally defined as a function that maps a message of arbitrary length to a fixed length (m-bit) hash value, is easy to compute but hard to invert, and in which a collision, finding two different messages with the same hash value, is computationally infeasible.

(i) Collision resistance : it must be computationally infeasible to find any two distinct messages M and M′ such that h(M) = h(M′). The best collision resistance one can hope to achieve with an m-bit hash function is upper bounded by the O(2m/2) complexity of a birthday attack[16].

(ii) Preimage resistance (one wayness) : given the h(M) hash value of an unknown message M, it must be computationally infeasible to find any message M′ (equal or not to M) such that h(M′) = h(M). The best preimage resistance one can hope to achieve with an m-bit hash function is upper bounded by the O(2m) complexity of an “exhaustive” search.

(iii) Second preimage resistance (weak collision resistance) : given any M known message and its h(M) hash value, it must be computationally infeasible to find any M′ message distinct from M such that h(M′) = h(M). The best preimage resistance one can hope to achieve with an m-bit hash function is upper bounded by the O(2m) complexity of an “exhaustive” search.

Requirement (i) is by far the most important one in practice for the assessment of any candidate hash function such as the one considered in this paper, since:

As we discussed previously, the secure hash algorithms (SHAs) are designed to be one-way functions. Additionally, SHAs exhibit the avalanche effect, where the modification of very few letters to be encrypted causes a significant change in the output. Hence, SHAs will provide random results. If we use specific number of random hashes to construct a matrix, the matrix will be a “random” matrix. Herein, we discuss more details about random 0/1 matrices.

For simplicity, we start with results on 2×2

are iid random variables with density,

. Then the probability of density of

Using the expression given as above, Williamson shows a graph of probability density of D (the determinant of a 2×2 random matrix with independent element uniformly distributed on [0,1])[17]. The density graph of the determinants peaks at 0 with a symmetry between positive and negative determinants. Moreover, as determinant value distances from 0, the density drops exponentially. Komlos has studied the singularity of random matrices and has shown that if ξi,j (i,j = 1,2,…) are iid with a non-degenerate distribution[18], then

In this section, we will show the results got from our Seele’s main-net where we implement our new PoW consensus algorithm. Fig.1 presents the results on 30×30 matrices with iid uniformly distributed elements constructed with hashes. Similar to results in Williamson’s paper[17], our histogram of determinants of 30×30 matrices (the size of data set is around 1 million) shows a peak at around 0, and as determinant value deviates from 0, the frequency decreases exponentially. All results agree well with the data from the forementioned paper.

For matrices constructed with specific number of hashes, we also observe that as the dimension increases, the frequency of matrix whose determinant is 0 decreases[18]. The singularity of a random matrix is out of scope of this paper, which we won’t discuss in details here.

As seen in Fig. 1, the distribution of determinant is symmetrical with a mean value around 0. In Fig.2, we count the number of 30×30 submatrices with non-negative determinants, selected from 30×256 matrices constructed by 30 hashes (for convenience, we call those submatrices as “large submatrices”). Equation.10

A (-1,1)-matrix having a maximal determinant is known as a Hadamard matrix [19]. The same bound of nn/2 applies to such matrices, and sharper bounds are known when the size of the matrix is not a multiple of 4. A summary of what is known about such bounds is given by Orrick and Solomon[20].

For a (0,1)-matrix, Hadamard’s bound can be improved to

In this section, we will discuss the performance of our new MPoW consensus algorithm from the perspectives of block- time, difficulty adjustment and its efficiency in preventing machines with hashrate advantage, such as ASICs or GPUs, from dominating all mining rewards.

First of all, we will discuss the difficulty adjustment for our MPoW consensus algorithm. As more and more nodes (miners) join into the peer-to-peer network, stabilization of the network’s mining process require a stale block time to guarantee safety and decentralization. On the other hand, the block difficulty adjustment of MPoW algorithm needs to be gradual and smooth to achieve a stable block time (for Seele’s main-net, the goal of block time is 10 seconds). As shown in the Fig.1 and Fig.2

respectively, there is a well-defined probability distribution for determinants of submatrices and for the number of “large submatrices”.

The difficulty adjustment formula is defined as follows:

The block mining process will try to find a target matrix which meets two criteria:

(i) The determinant s of the submatrix constructed by first 30 columns and 30 rows meets:

If the matrix meets the first criterion, in order to increase the calculation time percentage of mining a block, our MPoW consensus algorithm further requires the miner to calculate determinants of all submatrices and the number of the “large submatrices” to be as large as count.

(ii) count is defined as:

In this paper, we introduce a new PoW consensus algorithm (MPoW) which requires miner to use SHA function to get specific number, n hashes and then use these hashes to construct a matrix(n×256) that satisfies two criteria: the determinant of first n×n submatrix should be not less than a target which can be dynamically adjusted based on the block time; Also, the number of submatrices with non-negative determinants should be larger than another given value. This MPoW consensus algorithm can efficiently eliminate the dominant advantage of machines whose hashrates are hundreds or thousand of times larger than personal computers. This consensus algorithm may pave the way to a real decentralizated blockchain. Furthermore, our new PoW (MPoW) consensus algorithm provides a new way to utilize the properties of a matrix to implement an efficient and secure blockchain’s consensus algorithm. SeeleTech’s research and development team will keep making an effort in this field and contributing to our community.