In practice, residual transceiver hardware impairments inevitably lead to distortion noise which causes the performance loss. In this paper, we study the robust transmission design for a reconfigurable intelligent surface (RIS)-aided secure communication system in the presence of transceiver hardware impairments. We aim for maximizing the secrecy rate while ensuring the transmit power constraint on the active beamforming at the base station and the unit-modulus constraint on the passive beamforming at the RIS. To address this problem, we adopt the alternate optimization method to iteratively optimize one set of variables while keeping the other set fixed. Specifically, the successive convex approximation (SCA) method is used to solve the active beamforming optimization subproblem, while the passive beamforming is obtained by using the semidefinite program (SDP) method. Numerical results illustrate that the proposed transmission design scheme is more robust to the hardware impairments than the conventional non-robust scheme that ignores the impact of the hardware impairments. 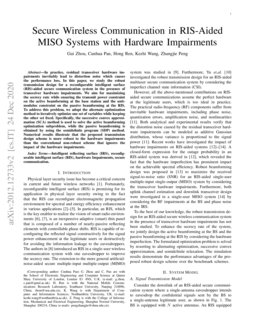 In this paper, we consider a smart factory scenario where a set of actua...
Jing Cheng, et al. ∙

Physical layer security issue has become a critical concern in current and future wireless networks [PLS-2015]. Fortunately, reconfigurable intelligent surface (RIS) is promising for its application in physical layer security owing to the fact that the RIS can reconfigure electromagnetic propagation environment for spectral and energy efficiency enhancement in various applications [Pan-jsac, Pan-twc, xianghao-2020, ning-letter]. In particular, an RIS, which is the key enabler to realize the vision of smart radio environments [Marco-6, Pan-mag], is an inexpensive adaptive (smart) thin panel that is composed of a number of nearly-passive reflecting elements with controllable phase shifts. RIS is capable of reconfiguring the reflected signal constructively for the signal power enhancement at the legitimate users or destructively for avoiding the information leakage to the eavesdroppers. The authors in [Shen2019secrecy] introduced an RIS in a single-user wireless communication system with one eavesdropper to improve the secrecy rate. The extension to the more general artificial-noise-aided secure multiple-input multiple-output (MIMO) system was studied in [hong-tcom]. Furthermore, Yu et.al. [xianghao-robust] investigated the robust transmission design for an RIS-aided multiuser secure communication system by considering the imperfect channel state information (CSI).

However, all the above-mentioned contributions on RIS-aided secure communications assume the perfect hardware at the legitimate users, which is too ideal in practice. The practical radio-frequency (RF) components suffer from inevitable hardware impairments, including phase noise, quantization errors, amplification noise, and nonlinearities [emil-HWI]

. Both analytical and experimental results verify that the distortion noise caused by the residual transceiver hardware impairments can be modeled as additive Gaussian distribution, whose variance is proportional to the signal power

. A closed-form expression for the outage probability in an RIS-aided system was derived in

[HWI-3], which revealed the fact that the hardware imperfection has prominent impact on the achievable spectral efficiency. Robust beamforming design was proposed in [HWI-1]

[HWI-2] by considering the RF impairments at the BS and phase noise at the IRS.

To the best of our knowledge, the robust transmission design for an RIS-aided secure wireless communication system in the presence of transceiver hardware impairments has not been studied. To enhance the secrecy rate of the system, we jointly design the active beamforming at the BS and the passive beamforming at the RIS by considering the hardware imperfection. The formulated optimization problem is solved by resorting to alternating optimization, successive convex approximation, and semidefinite relaxation. The simulation results demonstrate the performance advantages of the proposed robust design scheme over the benchmark schemes.

Consider the downlink of an RIS-aided secure communication system where a single-antenna eavesdropper intends to eavesdrop the confidential signals sent by the BS to a single-antenna legitimate user, as shown in Fig. 1. The BS is equipped with N active antennas. An RIS equipped with M programmable phase shifters is deployed in the network to improve the physical layer security. Different from the existing works, we consider the residual hardware impairments at the BS and the legitimate user. Therefore, the signal transmitted by the BS is given by

is the corresponding beamforming vector.

mt∈CN×1 is the independent Gaussian transmit distortion noise and the power of the distortion noise at each antenna is proportional to its transmit signal power, i.e., mt∼CN(0,μt˜diag(ffH)), where μt≥0 is the ratio of transmit distorted noise power to transmit signal power, and ˜diag(X) is a diagonal matrix whose diagonal entries are the diagonal elements of matrix X. This model has been widely used in the existing literature [emil-HWI, HWI-3, HWI-1, HWI-2] and is supported by theoretical investigations and measurements [emil-HWI] to accurately model the joint effect of imperfect components in RF chains of practical multiple-antenna systems.

where nU∼CN(0,σ2U) represents the additive white Gaussian noise (AWGN) at the legitimate user with noise variance σ2U. E=diag(e1,...,eM) is a diagonal phase shift matrix whose diagonal entry, em, is the reflection coefficient on the m-th reflecting element of the RIS. mU is an independent zero-mean Gaussian distortion noise at the legitimate user, which follows the distribution of CN(0,μrE{|˜yU|2}), where μr≥0 is the ratio of distorted noise power to undistorted received signal power.

where nE is the AWGN following the distribution of CN(0,σ2E). hBE∈CN×1 and hRE∈CM×1 are the channels of the BS-eavesdropper and the RIS-eavesdropper links, respectively. In this work, we assume that the BS perfectly knows all the CSI in the entire network.

RE is the rate of the eavesdropper and is expressed as

where GE=[diag(hHRE)HBRhHBE]∈C(M+1)×N is the equivalent channel, and ΦE(f,e)=μtfH˜diag(GHEeeHGE)f+σ2E is the noise power.

In this work, we propose to maximize the secrecy rate R given in (4) by jointly optimizing the beamforming vector at the BS and the passive beamforming at the RIS. The problem is formulated as

Problem (7) is challenging to solve due to the non-concave objective function and the non-convex constraint (7c). Furthermore, in contrast to [Shen2019secrecy] that a closed-form solution was derived for f, it is not straightforward to obtain a closed-form solution for f in Problem (7) due to the fact that the distortion noise introduced by the hardware impairments aggregate the complexity of the secrecy rate expression.

In this section, we adopt the alternating optimization (AO) method to address the coupling of the beamforming vector at the BS and the reflection beamforming at the RIS in Problem (7). Specifically, we alternately update f and e while fixing the other variable.

Then, by firstly introducing auxiliary variables p=[p1,p2,p3,p4]T, Problem (7) is reformulated as

By using contradiction method, it can be readily proved that constraint (8d) and (8e) hold with equality at the optimum. Hence, Problem (8) is equivalent to the original problem (7).

When e is given, we further introduce auxiliary variables rf=[rf,1,rf,2,rf,3,rf,4]T such that non-convex constraints (8d) and (8e) are respectively equivalent to

It is observed from (9) and (10) that constraints (9a), (9d), (10b), and (10c) are convex, while constraints (9b), (9c), (10a), and (10d) are concave. According to [book-convex], the SCA can be used to address those concave constraints. In particular, by adopting the first-order Taylor approximation and the equality , we have the following equivalent constraints

where A1=(1+μr)GHUeeHGU+(1+μr)μt˜diag(GHUeeHGU) and A2=μt˜diag(GHEeeHGE). rnf,2, rnf,3, and fn are the solutions obtained at the n-th iteration.

Finally, the subproblem for solving f is formulated as

Problem (12) is an SOCP and can be solved by using the CVX tool.

In order to tackle the non-convex unit-modulus constraint e∈S, we adopt the semidefinite relaxation (SDR) technique to update e. In particular, by defining a new variable ˜E=eeH, constraint e∈S is replaced by {˜E⪰0,rank(˜E)=1,˜diag(˜E)=IM+1}. Furthermore, with fixed f and new auxiliary variables re=[re,1,re,2,re,3,re,4]T, non-convex constraint (8d) is equivalent to

where B1=B2+GUffHGHU and B2=μrGUffHGHU+(1+μr)μtGU˜diag(ffH)GHU. The non-convex constraint (8e) is equivalent to

where B3=B4+GEffHGHE and B4=μtGE˜diag(ffH)GHE. In (13) and (14), the only non-convex constraints (13b) and (14a) can be approximated by using the first-order Taylor approximation as

where rne,2 and rne,3 are the solutions obtained at the n-th iteration.

Finally, the relaxed subproblem of Problem (8) is formulated as

Problem (16) is a convex SDP and is solved by the CVX tools. The suboptimal solution v, which maximizes the objective value of Problem (7), can be obtained from the optimal ˜E by using Gaussian randomization techniques. Then, v is projected onto the constraint set S as ˜e=exp(j∠(v[v]M+1)), where j≜√−1, ∠(x) denotes the angle of x, and [x]m denotes the m-th entry of vector x. Please note that the suboptimal solution ˜e generated by the SDR method cannot guarantee that the objective value of Problem (7) in the (n+1)-th iteration is no smaller than that in the previous iteration. Therefore, in order to ensure the non-decreasing objective value sequence generated in each iteration, we adopt the following update

Note that when en+1=en, we still have R(fn+2,en+1)>R(fn+1,en+1)=R(fn+1,en) and the iteration process does not terminate until convergence. The reason is that the optimal fn+2 of the next iteration is obtained based on fn+1 and en.

Firstly, we state that the objective value sequence {R(Fn,en)} generated in each iteration is non-decreasing. In particular, it follows that

Moreover, the objective value R(Fn,en) has a finite upper bound due to the bounded transmit power constraint. Therefore, Algorithm 1 is guaranteed to converge.

Fig. 2 investigates the secrecy rate of different schemes as a function of the maximum transmit power at the BS when M=16. Fig. 2 shows that the secrecy rate tends to be stable with the increase of Pmax. This is because the distortion noise caused by hardware impairments is proportional to the transceiver signal power, so there is an upper bound for the secrecy rate as a function of the maximum transmit power. It is interesting to find that the robust beamforming design in traditional systems without RIS is not effective in compensating for the performance loss caused by the hardware impairments. However, the robust design is more effective in RIS-aided secure systems. These observations reveal the importance of the robust design for RIS-aided secure systems by considering the hardware impact.

Fig. 3 illustrates the impact of the number of the reflecting elements on the system performance when Pmax=30 dBm. Firstly, the increase of RIS’s size can enhance the secrecy rate, but this performance gain decreases when the level of the hardware impairments (i.e., μt and μr) increases. Furthermore, by comparing the systems with {μt=0.01,μr=0.02} and the systems with {μt=0.02,μr=0.01}, the hardware impairments on legitimate user has a greater negative impact on the secrecy rate than that of the hardware impairments on the BS. This is because the proportion of the receive distortion noise power in total received noise is much larger than the transmit distortion noise power.

In this work, we have improved the performance of the secrecy communication system in the presence of transceiver hardware impairments by employing an RIS and designing robust beamforming. The secrecy rate of the system was maximized by the joint optimization of the active beamforming vector at the BS and the passive beamforming at the RIS when the distortion noise caused by the hardware impairments was taken into account. The two variables were updated alternately by solving two approximate subproblems as the form of SOCP and SDP, respectively. Our simulation results have demonstrated the performance advantage of the proposed beamforming design.