In this paper, we consider the problem of secret key generation with one-way communication through both a rate-limited public channel and a rate-limited secure channels where the public channel is from Alice to Bob and Eve and the secure channel is from Alice to Bob. In this model, we do not pose any constraints on the sources, i.e. Bob is not degraded to or less noisy than Eve. We obtain the optimal secret key rate in this problem, both for the discrete memoryless sources and vector Gaussian sources. The vector Gaussian characterization is derived by suitably applying the enhancement argument, and Proving a new extremal inequality. The extremal inequality can be seen as coupling of two extremal inequalities, which are related to the degraded compound MIMO Gaussian broadcast channel, and the vector generalization of Costa's entropy power inequality, accordingly. 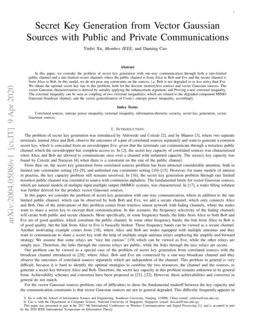 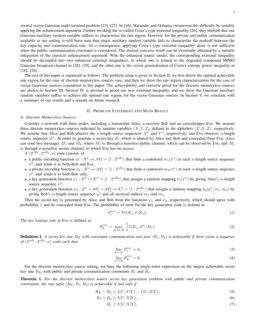 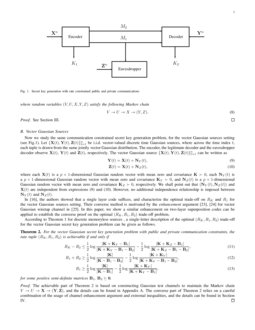 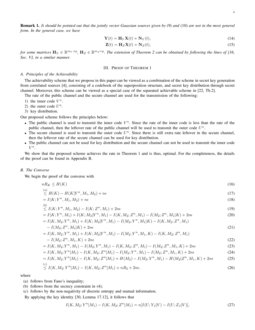 The problem of secret key generation was introduced by Ahlswede and Csiszár [2], and by Maurer [3], where two separate terminals, named Alice and Bob, observe the outcomes of a pair of correlated sources separately and want to generate a common secret key, which is concealed from an eavesdropper Eve, given that the terminals can communicate through a noiseless public channel which the eavesdropper has complete access to. In [2], the secret key capacity of correlated sources was characterized when Alice and Bob are allowed to communicate once over a channel with unlimited capacity. The secrecy key capacity was found by Csiszár and Narayan [4] when there is a constraint on the rate of the public channel.

From then on, the secret key generation from correlated sources problem has been attracted considerable attention, both in limited rate constraints setting[5, 6, 7, 8, 9], and unlimited rate constraints setting [10, 11, 12, 13, 14, 15]. However, for many models of interest in practise, the key capacity problem still remains unsolved. In [16], the secret key generation problem through rate limited noiseless public channel was extended to source with continuous alphabets. The fundamental limits for vector Gaussian sources, which are natural models of multiple input multiple output (MIMO) systems, was characterized. In [17], a water filling solution was further derived for the product vector Gaussian sources.

In this paper, we consider the problem of secret key generation with one-way communication, where in addition to the rate limited public channel, which can be observed by both Bob and Eve, we add a secure channel, which only connects Alice and Bob. One of the motivations of this problem comes from wireless sensor network with fading channels, where the nodes want to share a secret key to encrypt their communication. In this scenario, the frequency selectivity of the fading channels will create both public and secure channels. More specifically, in some frequency bands, the links from Alice to both Bob and Eve are of good qualities, which constitute the public channel. In some other frequency bands, the link from Alice to Bob is of good quality, but the link from Alice to Eve is basically broken. These frequency bands can be viewed as a secure channel. Another motivating example comes from [18], where Alice and Bob are nodes equipped with multiple antennas and they want to communicate to share a secret key with the help of multiple single-antenna relays employing the amplify-and-forward strategy. We assume that some relays are “nice but curious”[19] which can be viewed as Eve, while the other relays are simply nice. Therefore, the links through the curious relays are public, while the links through the nice relays are secure.

Our problem can be viewed as a special case of the problem of secret key generation from correlated sources with the broadcast channel introduced in [20], where Alice, Bob and Eve are connected by a one-way broadcast channel and they observe the outcomes of correlated sources separately which are independent of the channel. This problem in general is very difficult, because it is hard to identify the optimal strategies to combine the two resources, the channel and the sources, to generate a secret key between Alice and Bob. Therefore, the secret key capacity in this problem remains unknown in its general form. Achievability schemes and converses have been proposed in [21, 22]. However, these achievabilities and converses in general do not match.

, they showed that one Gaussian auxiliary random variable suffices to characterise the rate region. However, for the private and public communication available in our setting, it will been seen that single auxiliary random variable fails to characterize the tradeoff between the key capacity and communication rate. As a consequence, applying Costa’s type extremal inequality alone is not sufficient when the public communication constraint is considered. The desired converse result can be eventually obtained by a suitable integration of the classical enhancement argument. With the enhanced source model, the corresponding extremal inequality should be decoupled into two enhanced extremal inequalities, in which one is related to the degraded compound MIMO Gaussian broadcast channel in

The rest of this paper is organized as follows. The problem setup is given in Section II, we first derive the optimal achievable rate region for the case of discrete memoryless sources case, and then we show the rate region characterization for the case of vector Gaussian sources considered in this paper. The achievablility and converse proof for the discrete memoryless sources are shown in Section III. Section IV is devoted to proof our new extremal inequality, and we show the Gaussian auxiliary random variables suffice to achieve the optimal rate region, for the vector Gaussian sources. In Section V, we conclude with a summary of our results and a remark on future research.

Consider a network with three nodes, including a transmitter Alice, a receiver Bob and an eavesdropper Eve. We assume three discrete memoryless sources indicated by random variables (X,Y,Z), defined in the alphabets (X,Y,Z), respectively. We assume that Alice and Bob observe the n-length source sequences Xn and Yn, respectively, and Eve observes n-length source sequence Zn. In order to generate a secret key K, which is shared by Alice and Bob and concealed from Eve, Alice can send two messages M1 and M2, where M1 is through a noiseless public channel, which can be observed by Eve, and M2 is through a noiseless secure channel, to which Eve has no access.

, respectively, which should agree with probability

1 and be concealed from Eve. The probability of error for the key generation code is defined as

The key leakage rate at Eve is defined as

A secret key rate RK with constraint communication rate pair (R1,R2) is achievable if there exists a sequence of (2nR1,2nR2,n) code such that

For the discrete memoryless source setting, we have the following single-letter expression on the largest achievable secret key rate RK with public and private communication constraints R1 and R2.

For the discrete memoryless source secret key generation problem with public and private communication constraints, the rate tuple (RK,R1,R2) is achievable if and only if

, each tuple is drawn from the same jointly vector Gaussian distribution. The encoder, the legitimate decoder and the eavesdropper decoder observe

In [16], the authors showed that a single layer code suffices, and characterize the optimal trade-off on RK and R1 for the vector Gaussian sources setting. Their converse method is motivated by the enhancement argument [23], [24] for vector Gaussian wiretap channel in [25]. In this paper, we show a similar enhancement on two-layer superposition codes can be applied to establish the converse proof on the optimal (RK,R1,R2) trade-off problem.

According to Theorem 1 for discrete memoryless sources , a single-letter description of the optimal (RK,R1,R2) trade-off for the vector Gaussian secret key generation problem can be given as follows.

For the vector Gaussian secret key generation problem with public and private communication constraints, the rate tuple (RK,R1,R2) is achievable if and only if

for some positive semi-definite matrices B1, B2⪰0.

It should be pointed out that the jointly vector Gaussian sources given by (9) and (10) are not in the most general form. In the general case, we have

for some matrices HY∈RmY×p, HZ∈RmZ×p. The extension of Theorem 2 can be obtained by following the lines of [16, Sec. V], in a similar manner.

Iii-a Principles of the Achievability

The achievability scheme that we propose in this paper can be viewed as a combination of the scheme in secret key generation from correlated sources [4], consisting of a codebook of the superposition structure, and secret key distribution through secret channel. Moreover, this scheme can be viewed as a special case of the separated achievable scheme in [22, Th.2].

The rate of the public channel and the secure channel are used for the transmission of the following:

Our proposed scheme follows the principles below:

We show that the proposed scheme achieves the rate in Theorem 1 and is thus, optimal. For the completeness, the details of the proof can be found in Appendix B.

We begin the proof of the converse with

Finally, for the public rate R1, we have

By the similar argument as in the sum rate derivation, we can get

where V as defined in (28) and J is uniform on [1:n], which concludes the converse proof of Theorem 1.

Iv The Converse of Theorem 2

As in [16], the achievable rate region of (RK,R1,R2) for vector Gaussian sources is defined as

Due to the convexity of R(X,Y,Z), to characterize the optimal trade-off of (RK,R1,R2) for the vector Gaussian model, we can write the following μ-sum problem, alternatively,

where R∗(μ1,μ2,μ3) is a Gaussian optimization problem shown as follows

Let (B∗1,B∗2) be one (non-unique) minimizer of the optimization problem R∗(μ1,μ2,μ3). The necessary Karush-Kuhn-Tucker (KKT) conditions are given in the following lemma.

for some positive semi-definite matrices B∗1,B∗2,M1,M2⪰0 such that

Now Starting from the single-letter expressions in Theorem 1, the μ-sum problem for any rate tuple in R(X,Y,Z) should be lower bounded by

By comparing (64) with optimization problem R∗(μ1,μ2,μ3) in (IV-A), it can be shown that to prove Theorem 2, it is sufficient to prove the following extremal inequality

There exist two positive semi-definite matrices B∗1 and B∗2, which satisfy KKT conditions (55)-(58) in lemma 1 to minimize optimization problem R∗(μ1,μ2,μ3), then for some real numbers μ1,μ2,μ3≥0, we have

The proof of (65) depends on the enhancement argument introduced in[23], [24], which can be divided into two steps. In the first step, we enhance the source Y to ~Y such that the Markov chain X→~Y→(Y,Z) holds. In the second step, we decouple to extremal inequality (64) to two new ones, associated with enhanced sources ~Y, respectively. The proof of extremal inequality (64) in provided by involving the two enhanced extremal inequalities, which is related to the degraded compound MIMO Gaussian broadcast channel in [28, 29], and the vector generalization of Costa’s entropy power inequality in [26, 16].

In order to reduce the non-degraded sources to the degraded case, we introduce a new covariance matrix such that

Then ~KY has useful properties listed in the following lemma.

~KY has the following properties:

The proof of Lemma 2 is left in Appendix D. ∎

Furthermore, let B∗ be a positive semi-definite covariance matrix such that

We proceed to proof the extremal inequality (65). At the beginning, we rewrite the l.h.s. of (65) by involving the enhancement source ~Y.