In this paper, the physical layer security (PLS) for a novel reconfigurable intelligent surface (RIS)-assisted non-orthogonal multiple access (NOMA) system in a multi-user scenario is investigated, where we consider the worst case that the eavesdropper also utilizes the advantage of the RISs. More specifically, we derive analytical results for the secrecy outage probability (SOP). From the numerical results, we observe that the use of RISs can improve the secrecy performance compared to traditional NOMA systems. However, for the worst case that the received signals at the eavesdropper comes from the RISs and source, increasing the number of intelligent elements on the RIS has a negative impact on the secrecy performance. At high SNRs, the system's SOP tends to a constant. Finally, the secrecy performance can be improved through the group selection. 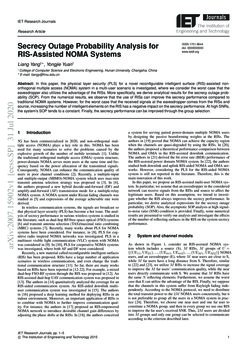 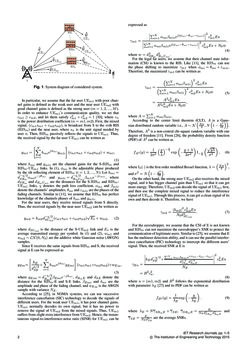 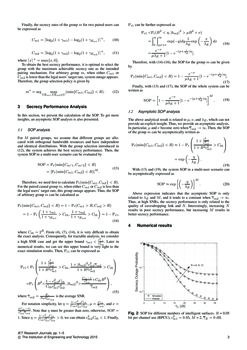 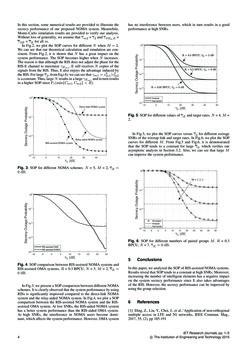 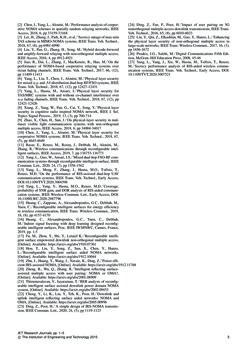 5G has been commercialized in 2020, and non-orthogonal multiple access (NOMA) plays a key role in this. NOMA has been used for many scenarios to solve the problems caused by the explosive growth of the number of mobile terminals [1]. Unlike the traditional orthogonal multiple access (OMA) system structure, power-domain NOMA serves more users at the same time and frequency based on the power allocation of the transmitted signals. Consequently, NOMA can enhance the communication quality of users in poor channel conditions [2]. Recently, a multiple-input and multiple-output (MIMO)-NOMA system which uses max-min transmit antenna selection strategy was proposed in [3]. In [4], the authors proposed a new hybrid decode-and-forward (DF) and amplify-and-forward (AF) transmission mode for a multiple-relay NOMA system. A NOMA system under Rician fading channels was studied in [5] and expressions of the average achievable rate were derived.

In wireless communication systems, the signals are broadcast so that physical layer security (PLS) has become a hot issue. The analysis of secrecy performance in various wireless systems is studied in the literature, such as dual-hop RF/free-space optical (FSO) systems [6] and transmit antenna selection (TAS)/maximal ratio combining (MRC) systems [7]. Recently, many works about PLS for NOMA systems have been considered. For instance, in [8], PLS for cognitive radio inspired NOMA networks was investigated. PLS in a multiuser visible light communication (VLC) system with NOMA was considered in [9]. In [10], PLS for cooperative NOMA systems was investigated, where both AF and DF were considered.

Recently, a new material called reconfigurable intelligent surfaces (RIS) has been proposed. RISs have a large number of application scenarios in wireless communication, and even change the traditional communication structure [11]. So far, there are many works based on RISs have been reported in [12-22]. For example, a mixed dual-hop FSO-RF system through the RIS was proposed in [12]. An RIS-assisted dual-hop UAV communication system was proposed in [13]. The authors in [14] quantitatively analyzed the coverage for an RIS-aided communication system. An RIS-aided downlink multi-user communication system was investigated in [15]. The authors in [16] proposed a deep learning method for deploying RISs in an indoor environment. Moreover, an important application of RISs is to combine with NOMA to further improve communication quality. For instance, the authors in [17] proposed an RIS-empowered NOMA network to introduce desirable channel gain differences by adjusting the phase shifts at the RISs. In [18], the authors conceived a system for serving paired power-domain multiple NOMA users by designing the passive beamforming weights at the RISs. The authors in [19] proved that NOMA can achieve the capacity region when the channels are quasi-degraded by using the RISs. In [20], the authors proposed a theoretical performance comparison between NOMA and OMA in the RIS-assisted downlink communication. The authors in [21] derived the bit error rate (BER) performance of the RIS-assisted power domain NOMA system. In [22], the authors studied both downlink and uplink RIS-aided NOMA and OMA networks. However, considering the PLS for the RIS-aided NOMA system is still not reported in the literature. Therefore, this is the main innovation of this work.

In this paper, we propose an RIS-assisted multi-user NOMA system. In particular, we assume that an eavesdropper in the considered network can receive signals from the RISs and source to affect the legitimate users. Based on this assumption, we intend to investigate whether the RIS always improves the secrecy performance. In particular, we derive analytical expressions for the secrecy outage probability (SOP). Also, the asymptotic SOP analysis at high signal-to-noise ratio (SNR) condition is provided. Finally, some numerical results are presented to verify our analysis and investigate the effects of the number of reflecting surfaces in the RIS on the system secrecy performance.

As shown in Figure 1, consider an RIS-assisted NOMA system which includes a source (S), M RISs, M groups of U={(UE11,UE21),...,(UEm1,UEm2),...,(UEM1,UEM2)} NOMA users, and an eavesdropper (E), where M near users are close to S, while M far users have a long distance from S. Therefore, similar to [22] and [23], we utilize M RISs to increase the signal coverage to improve the M far users’ communication quality, while the near users directly communicate with S. We assume that M RISs have the same N reflecting elements. Furthermore, we assume the worst case that E can utilize the advantage of the RIS. Finally, we suppose that the channels in this system suffer from Rayleigh fading independently.

According to the NOMA protocol, we need to distribute the total transmit power to the 2M NOMA users concurrently, but it is not preferable to group all the users in a NOMA system in practice [24]. Therefore, we choose one near user and one far user to constitute a NOMA group, and then in every group we use one RIS to improve the far user’s received SNR. Thus, 2M users are divided into M groups and only one group can be selected to communicate according to the criterion described later.

In particular, we assume that the far user UEm1 with poor channel gains is defined as the weak user and the near user UEm2 with good channel gains is defined as the strong user (m=1,2,...,M). In order to enhance UEm1’s communication quality, we set that cm1≥cm2, and let them satisfy c2m1+c2m2=1 [10], where cn is the power distribution coefficient (n=m1,m2). First, the mixed signal, (cm1sm1+cm2sm2), is broadcast from S to the mth RIS (RISm) and the near user, where sn is the unit signal needed by user n. Then, RISm passively reflects the signals to UEm1. Thus, the received signal by the far user UEm1 can be written as

where hmi and gm1i are the channel gains for the S-RISm and RISm-UEm1 links. In (1), ϕmi is the adjustable phase produced by the ith reflecting element of RISm (i=1,2,...,N). Let hmi=d−χ/2SRmαmie−jθmi and gm1i=d−χ/2RmUm1βm1ie−jεm1i, where dSRm and dRmUm1 are the distances for the S-RISm and RISm-UEm1 links, χ denotes the path loss coefficient, αmi and βm1i denote the channels’ amplitudes, θmi and εm1i are the phases of the fading channels. Similar to [11], we assume that RISm has perfect knowledge of the channels phases of hmi and gm1i.

where dSUm2 is the distance of the S-UEm2 link and Es is the average transmitted energy per symbol. In (1) and (2), wm1 and wm2∼CN(0,N0) are the additive white Gaussian noise (AWGN) samples.

Since E receives the same signals from RISm and S, the received signal at E can be expressed as

where gEmi=d−χ/2RmEβEmie−jδmi, dRmE and dSE denote the distance for the RISm-E and S-E links, βEmi and δmi are the amplitude and phase of the fading channel, and wEm

is the AWGN sample with variance

According to [25], in NOMA systems, we can use successive interference cancellation (SIC) technology to decode the signals of different users. For the weak user UEm1, it has poor channel gains. UEm1 normally decodes its own signal, but it has no power to remove the signal of UEm2 from the mixed signals. Thus, UEm1 suffers from slight extra interference from UEm2. Hence, the instantaneous signal-to-interference-noise ratio (SINR) for UEm1 can be expressed as

For the legal far users, we assume that their channel state information (CSI) is known to the RIS. Like [11], the RISm can use the phase shifting to maximize γm1 when ϕmi=θmi+εm1i. Therefore, the maximized γm1 can be written as

According to the center limit theorem (CLT), A

is a non-central chi-square random variable with one degree of freedom [11]. From [26], the probability density function (PDF) of

A2 can be written as

For the eavesdropper, we assume that the CSI of E is not known and RISm can not maximize the eavesdropper’s SNR to protect the communication of legitimate users. Similar to [25], we assume that E has the multiuser detection ability, and it can use the parallel interference cancellation (PIC) technology to intercept the different users’ signal. Then, the received SNR at E is

follows the exponential distribution with parameter

Finally, the secrecy rates of the group m for two paired users can be expressed as

To obtain the best secrecy performance, it is optimal to select the group with the maximum achievable secrecy rate as the intended pairing mechanism. For arbitrary group m, when either Cm1 or Cm2 is lower than the legal users’ target rate, system outage appears. Therefore, the group selection policy is given by

In this section, we present the calculation of the SOP. To get more insights, an asymptotic SOP analysis is also presented.

For M paired groups, we assume that different groups are allocated with orthogonal bandwidth resources and have independent and identical distributions. With the group selection introduced in (12), the system achieves the best secrecy performance. Then, the system SOP in a multi-user scenario can be evaluated by

Therefore, we need first to calculate Pr(min{Cm1,Cm2}<R). For the paired casual group m, when either Cm1 or Cm2 is less than the legal users’ target rate, this group outage appears. Thus, the SOP of arbitrary group m can be calculated as

where Cth=2R. From (4), (7), (14), it is very difficult to obtain the exact analysis. Consequently, for tractable analysis, we consider a high SNR case and get the upper bound γm1<c2m1c2m2. Later in numerical results, we can see this upper bound is very tight to the exact simulation results. Then, Pr1 can be expressed as

The above analytical result is related to μ, ν, and λE

, which can not provide an explicit insight. Thus, we provide an asymptotic analysis. In particular,

μ and ν become zero when ¯¯¯γm2→∞. Then, the SOP of the group m can be asymptotically written as

With (13) and (19), the system SOP in a multi-user scenario can be asymptotically expressed as

In Fig.2, we plot the SOP curves for different N when M=2. We can see that our theoretical calculation and simulation are consistent. From Fig.2, it is shown that N has a great impact on the system performance. The SOP becomes higher when N increases. The reason is that although the RIS does not adjust the phase for the RIS-E channel to maximize γEm1, E still receives N copies of the signals from the RIS. Thus, E also enjoys the advantage induced by the RIS. For large ¯¯¯γ2, from Eq.(4), we can see that γm1=c2m1/c2m2 is a constant. Thus, large N results in a large γEm1 and in turn results in a higher SOP since Pr(min{Cm1,Cm2}<R).

In this paper, we analyzed the SOP of RIS-assisted NOMA systems. Results reveal that SOP tends to a constant at high SNRs. Moreover, increasing the number of intelligent elements has a negative impact on the system secrecy performance since E also takes advantages of the RIS. However, the secrecy performance can be improved by using the group selection.