We investigate the secret key generation in the multiterminal source model, where the users discuss under limited rate. For the minimally connected hypergraphical sources, we give an explicit formula of the maximum achievable secret key rate, called the secrecy capacity, under any given total discussion rate. Besides, we also partially characterize the region of achievable secret key rate and discussion rate tuple. When specializes to the hypertree sources, our results give rise to a complete characterization of the region. 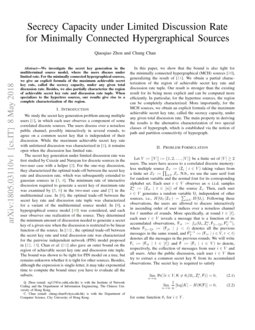 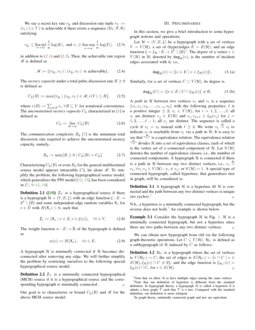 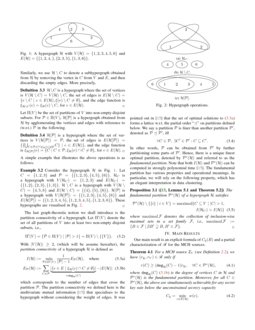 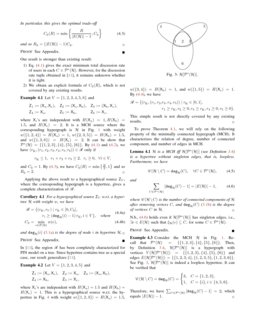 On the Key Generation Rate of Physically Unclonable Functions

In this paper, an algebraic binning based coding scheme and its associat...
Yitao Chen, et al. ∙

We investigate the problem of covert and secret key generation over a di...
Mehrdad Tahmasbi, et al. ∙

We study the secret key generation problem among multiple users [1], in which each user observes a component of some correlated discrete sources. The users discuss over a noiseless public channel, possibly interactively in several rounds, to agree on a common secret key that is independent of their discussion. While the maximum achievable secret key rate with unfettered discussion was characterized in [1], it remains open when the discussion has limited rate.

In this paper, we show that the bound is also tight for the minimally connected hypergraphical (MCH) sources [10], generalizing the result of [11]. We obtain a partial characterization of the region of achievable secret key rate and discussion rate tuple. Our result is stronger than the existing result for its being more explicit and can be computed more efficiently. In particular, for the hypertree sources, the region can be completely characterized. More importantly, for the MCH sources, we obtain an explicit formula of the maximum achievable secret key rate, called the secrecy capacity, under any given total discussion rate. The main property in deriving the results is the alternative characterization of two special classes of hypergraph, which is established via the notion of path and partition connectivity of hypergraph.

N.b., we use the sans serif font for random variable and the normal font for its corresponding alphabet set. Each user

i∈V observes an n i.i.d. samples Zni:=(Zit∣t∈[n]) of the source Zi. Then, each user i∈V generates a random variable Ui independent of other sources, i.e., H(UV|ZV)=∑i∈VH(Ui). Following these observations, the users are allowed to discuss interactively in ascending order of user indices over a noiseless channel for ℓ number of rounds. More specifically, at round t∈[ℓ], each user i∈V reveals a message that is a function of its accumulated observations, Fit:=fit(Ui,Zni,F[i−1]t,Ft−1V), where F[i−1]t:=(Fjt∣j<i) denotes all the previous messages in the same round, and Ft−1V:=(Fiτ∣i∈V,τ<t) denotes all the messages in the previous rounds. We will write Fi:=(Fit∣t∈[ℓ]) and F:=(Fi∣i∈V) to denote, respectively, the collection of messages from user i∈V and all users. After the public discussion, each user i∈V then try to extract a common secret key K from its accumulated observations. The secret key is required to satisfy

for some function θi for i∈V.

We say a secret key rate r\operator@fontK and discussion rate tuple rV:=(ri∣i∈V) is achievable if there exists a sequence (UV,F,K) satisfying

where r(B):=∑i∈Bri,∀B⊆V for notational convenience. The unconstrained secrecy capacity C\operator@fontS characterized in [1] is defined as

Characterizing C\operator@fontS(R) or even R\operator@fontS for the general multiterminal source model appears intractable [7], let alone R. To simplify the problem, the following hypergraphical source model, which generalizes the PIN model [12, 13], has been considered in [10, 7, 14, 11, 9].

ZV is a hypergraphical source if there is a hypergraph H=(V,E,ξ) with an edge function ξ:E→2V‘/{∅} and some independent edge random variables Xe for e∈E with H(Xe)>0, such that

The weight function w:E→R of the hypergraph is defined as

A hypergraph H is minimally connected if H becomes disconnected after removing any edge. We will further simplify the problem by restricting ourselves to the following special hypergraphical source model.

Our goal is to characterize or bound C\operator@fontS(R) and R for the above MCH source model.

In this section, we give a brief introduction to some hypergraph notions and operations.

Let H=(V,E,ξ) be a hypergraph with a set of vertices V=V(H), a set of (hyper)edges E=E(H), and an edge function ξ=ξH:E→2V‘/{∅}111Note that we allow H to have multiple edges among the same vertices. The degree of a vertex v∈V(H) in H, denoted by degH(v), is the number of incident edges associated with it, i.e.,

Similarly, for a set of vertices C⊂V(H), its degree is

A path in H between two vertices v1 and vℓ is a sequence {v1,e1,v2,…,eℓ−1,vℓ} with the following properties: ℓ is a positive integer ≥2; vi∈V(H), for i=1,2,…,ℓ; all vi are distinct; ej∈E(H) and vj,vj+1∈ξH(ej) for j=1,2,…,ℓ−1; all ej are distinct. The sequence is called a cycle if v1=vℓ instead with ℓ≥3. We write v1H∼vℓ to indicate vℓ is reachable from v1 via a path in H. It is easy to see that “H∼” is a equivalence relation. The equivalence relation “H∼” divides H into a set of equivalence classes, each of which is the vertex set of a connected component of H. Let C(H) denotes the number of equivalence classes, i.e., the number of connected components. A hypergraph H is connected if there is a path in H between any two distinct vertices, i.e., viH∼vj,∀vi,vj∈V(H):vi≠vj; or C(H)=1. A special type of connected hypergraph, called hypertree, that generalizes tree in graph, will be considered is:

Consider the hypergraph H in Fig. 1. H is a minimally connected hypergraph, but not a hypertree since there are two paths between any two distinct vertices. □

We can obtain new hypergraph from old via the following graph-theoretic operations. Let C⊆V(H). HC is defined as a subhypergraph of H induced by C as follows:

Similarly, we use H‘/C to denote a subhypergraph obtained from H by removing the vertex in C from V and E, and then discarding the empty edges. More precisely,

Let Π(V) be the set of partitions of V into non-empty disjoint subsets. For P∈Π(V), H[P] is a hypergraph obtained from H by agglomerating the vertices and edges with reference to (w.r.t.) P in the following.

A simple example that illustrates the above operations is as follows:

The last graph-theoretic notion we shall introduce is the partition connectivity of a hypergraph. Let Π′(V) denote the set of all partitions of V into at least two non-empty disjoint subsets, i.e.,

With |V(H)|≥2, (which will be assume hereafter), the partition connectivity of a hypergraph H is defined as

which corresponds to the number of edges that cross the partition P. The partition connectivity we defined here is the multivariate mutual information [15] that specialises to the hypergraph without considering the weight of edges. It was pointed out in [15] that the set of optimal solutions to (3.2a) forms a lattice w.r.t. the partial order “⪯” on partitions defined below. We say a partition P is finer than another partition P′, denoted as P⪯P′, iff

In other words, P can be obtained from P′ by further partitioning some parts of P′. Hence, there is a unique finest optimal partition, denoted by P∗(H) and referred to as the fundamental partition. Note that both I(H) and P∗(H) can be computed in strongly polynomial time [15]. The fundamental partition has various properties and operational meanings. In particular, we will rely on the following property, which has an elegant interpretation in data clustering.

The fundamental partition P∗(H) of a hypergraph H satisfies

Our main result is an explicit formula of C\operator@fontS(R) and a partial characterization of R for the MCH sources.

For a MCH source ZV (see Definition 2.2), we have (r\operator@fontK,rV)∈R only if

where degH(C) (3.1b) is the degree of vertices C in H and P∗(H) is the fundamental partition. Moreover, for all C∈P∗(H), the above are simultaneously achievable for any secret key rate below the unconstrained secrecy capacity

In particular, this gives the optimal trade-off

Our result is stronger than existing result:

Applying the above result to a hypergraphical source ZV, where the corresponding hypergraph is a hypertree, gives a complete characterization of R.

For a hypergraphical source ZV w.r.t. a hypertree H with weight w, we have

In [11], the region R has been completely characterized for PIN model on a tree. Since hypertree contains tree as a special case, our result generalizes [11].

This simple result is not directly covered by any existing results. □

To prove Theorem 4.1, we will rely on the following property of the minimally connected hypergraph (MCH). It characterizes the relation of degree, number of connected component, and number of edges in MCH.

H is a MCH iff H[P∗(H)] (see Definition 3.4) is a hypertree without singleton edges, that is, loopless. Furthermore, we have

where C(H‘/C) is the number of connected components of H after removing vertces C, and degH(C) (3.1b) is the degree of vertices C in H. □

To prove Corollary 4.1 and Lemma 4.1, we will use the following alternative characterization of the hypertree through the partition connectivity and fundamental partition.

A hypergraph H is a hypertree (see Definition 3.1) iff

In this paper, we give an explicit formula of the secrecy capacity under any given total public discussion rate for sources which correspond to minimally connected hypergraph. A key property in the derivation of the result is the alternative characterization of two special classes of hypergraph, which is established through the notion of path and partition connectivity of hypergraph. While we also partially characterize the region of achievable secret key rate and discussion rate tuple, a complete charaterization still remains unknown, and will be a interesting future work.

To prove Theorem 4.1, we will make use of the following outer bound on the region R in [11].

For any (r\operator@fontK,rV)∈R, we have

where the first equality follows from (4.1). Therefore, (4.1) holds trivially.

Next, we consider to prove (4.2). Let e∗ be the optimal solution to the R.H.S. of (4.2) and P be the set of equivalent classes of H after removing edge e∗. It follows that P∈Π′(V) due to the fact that H is minimally connected. Then,

which are simultaneously achievable for any key rate r\operator@fontK≤C\operator@fontS=mine∈E(H)w(e) as suggested by Theorem 4.1. This completes the proof of Corollary 4.1. ■

where (a) is as argued in (1.2); (b) is as argued above. This violates the Proposition 3.1. Therefore, H[P∗(H)] is a hypertree. It remains to prove H[P∗(H)] is loopless. Suppose to the contrary that H[P∗(H)] has a singleton edge e′∈E(H[P∗(H)]) incident on C∈P∗(H). Then, !∃e∈E(H), such that ξH(e)⊆ξH[P∗(H)]=C. Removing e from H does not disconnect HC, otherwise, I(HC)≤1=I(H[P∗(H)])=I(H) contradicts Proposition 3.1. Doing so does not disconnect the vertices P∗(H)‘/C in H[P∗(H)] either, since H[P∗(H)] is a hypertree. Therefore, H remains connected after removing e, contradicting the fact that H is minimally connected. Hence, H[P∗(H)] is loopless.