We consider a dynamical system, defined by a system of autonomous differential equations, on Ω⊂ℝ^n. By using Mickens' rule on the nonlocal approximation of nonlinear terms, we construct an implicit Nonstandard Finite Difference (NSFD) scheme that, under an existence and uniqueness condition, is an explicit time reversible scheme. Apart from being elementary stable, we show that the NSFD scheme is of second-order and domain-preserving, thereby solving a pending problem on the construction of higher-order nonstandard schemes without spurious solutions, and extending the tangent condition to discrete dynamical systems. It is shown that the new scheme applies directly for mass action-based models of biological and chemical processes. 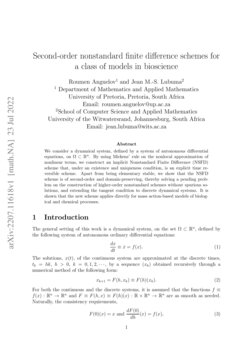 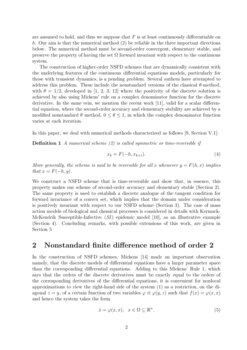 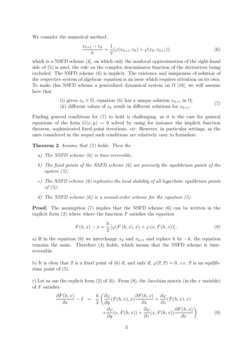 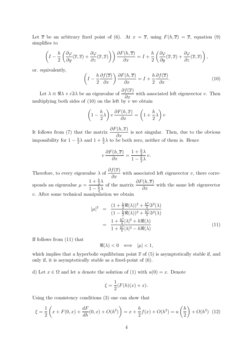 A High-Order Harmonic Balance Method for Systems With Distinct States

In this paper, we present a reformulation of Mickens' rules for nonstand...
Marc Songolo, et al. ∙

Existence, Uniqueness and Numerical Modeling of Wine Fermentation Based on Integro-Differential Equations

The general setting of this work is a dynamical system, on the set Ω⊂Rn

, defined by the following system of autonomous ordinary differential equations:

The solutions, x(t), of the continuous system are approximated at the discrete times, tk=hk, h>0, k=0,1,2,⋯, by a sequence (xk) obtained recursively through a numerical method of the following form:

For both the continuous and the discrete systems, it is assumed that the functions f≡f(x):Rn→Rn and F≡F(h,x)≡F(h)(x):R×Rn→Rn are as smooth as needed. Naturally, the consistency requirements,

are assumed to hold, and thus we suppose that F is at least continuously differentiable on h. Our aim is that the numerical method (2) be reliable in the three important directions below. The numerical method must be second-order convergent, elementary stable, and preserve the property of having the set Ω forward invariant with respect to the continuous system.

The construction of higher-order NSFD schemes that are dynamically consistent with the underlying features of the continuous differential equations models, particularly for those with transient dynamics, is a pending problem. Several authors have attempted to address this problem. These include the nonstandard versions of the classical θ-method, with θ=1/2, developed in [1, 2, 3, 12] where the positivity of the discrete solution is achieved by also using Mickens’ rule on a complex denominator function for the discrete derivative. In the same vein, we mention the recent work [11], valid for a scalar differential equation, where the second-order accuracy and elementary stability are achieved by a modified nonstandard θ method, 0≤θ≤1, in which the complex denominator function varies at each iteration.

In this paper, we deal with numerical methods characterized as follows [9, Section V.1]:

A numerical scheme (2) is called symmetric or time-reversible if

More generally, the scheme is said to be reversible for all x whenever y=F(h,x) implies that x=F(−h,y).

We construct a NSFD scheme that is time-reversible and show that, in essence, this property makes our scheme of second-order accuracy and elementary stable (Section 2). The same property is used to establish a discrete analogue of the tangent condition for forward invariance of a convex set, which implies that the domain under consideration is positively invariant with respect to our NSFD scheme (Section 3). The case of mass action models of biological and chemical processes is considered in details with Kermack-McKendrik Susceptible-Infective (SI) epidemic model [10], as an illustrative example (Section 4). Concluding remarks, with possible extensions of this work, are given in Section 5

In the construction of NSFD schemes, Mickens [14] made an important observation namely, that the discrete models of differential equations have a larger parameter space than the corresponding differential equations. Adding to this Mickens’ Rule 1, which says that the orders of the discrete derivatives must be exactly equal to the orders of the corresponding derivatives of the differential equations, it is convenient for nonlocal approximations to view the right-hand side of the system (1) as a restriction, on the diagonal z=y, of a certain function of two variables φ≡φ(y,z) such that f(x)=φ(x,x) and hence the system takes the form

We consider the numerical method,

which is a NSFD scheme [4], on which only the nonlocal approximation of the right-hand side of (5) is used, the rule on the complex denominator function of the derivatives being excluded. The NSFD scheme (6) is implicit. The existence and uniqueness of solution of the respective system of algebraic equation is an issue which requires attention on its own. To make this NSFD scheme a generalized dynamical system on Ω [18], we will assume here that

Finding general conditions for (7) to hold is challenging, as it is the case for general equations of the form G(x,y)=0 solved by using for instance the implicit function theorem, sophisticated fixed-point iterations, etc. However, in particular settings, as the ones considered in the sequel such conditions are relatively easy to formulate.

Assume that (7) holds. Then the

Proof. The assumption (7) implies that the NSFD scheme (6) can be written in the explicit form (2) where where the function F satisfies the equation

a) If in the equation (6) we interchange xk and xk+1 and replace h by −h, the equation remains the same. Therefore (4) holds, which means that the NSFD scheme is time-reversible.

be an eigenvalue of

v. Then multiplying both sides of (10) on the left by v we obtain

It follows from (7) that the matrix ∂F(h,¯¯¯x)∂x is not singular. Then, due to the obvious impossibility for 1−h2λ and 1+h2λ to be both zero, neither of them is. Hence

Using the consistency conditions (3) one can show that

Then, for the local truncation error,

Then using (12) we obtain E(h)=O(h3) and second order accuracy follows from the standard theory for one-step numerical methods.

Since the scheme (6) is symmetric, the statement d) of the Theorem can be derived from the general theory of symmetric schemes [9, Theorem II.3.2].

The theory for continuous dynamical systems of the form (1) provides theorems proving that a set is forward invariant through conditions only on the boundary of the set, e.g. [19, Section 10]. In this section we derive similar theorems for reversible maps, that is appropriate assumptions on the boundary of a set imply that the set is forward invariant.

Let D be a closed subset of Ω. We denote by ∘D the interior of D, by ∂D - the boundary of D and assume that

) is not easy to verify. It can be replaced by a stronger condition, requiring that the vector

F(−h,x)−x be outward directed or tangential to D at x∈∂D. This condition is similar to the tangent condition in [19, Section 10.XV], which is the essential property for invariance of sets under flows. In the setting of the system (1) for the set D the tangential condition states that

In the next theorem we make an additional assumption on D to be convex. Convexity of D implies that a normal vector and a tangent exist at every point x∈∂D. Further, a defining property of D being convex is that ∘D is on one side of any tangent at any point x∈∂D. Specifically, on the side not containing x+n(x).

Proof. Let h∈(0,¯¯¯h] and x∂D. The inequality (16) implies that the point x+(F(−h,x)−x) is on the same side as x+n(x) with respect to the tangent to D at x and associated with n(x). Considering that D is convex, this implies that F(−h,x)∉∘D. Then the conclusion follows from Theorem 4.

Modeling of biological and chemical processes by applying the mass action principle for representing the interaction of the involved species typically results in a system of the form (5) in Ω, a convex and compact subset of Rn+, where the function φ is linear in both its arguments. Then φ can be represented as

where P and Q are n×n matrix functions of x and y, respectively. The matrix A and the vector b are constant. In this particular setting the numerical method (6) can be written in the form

where I is the n×nidentity matrix. Furthermore, and also expressing it reversibility, the equation (18) can be written in the form

Considering that Ω is compact, there exists ¯¯¯h such that

Then, these matrices are invertible and (19) can be written explicitly as

Proof. The scheme (18) is constructed in the general form (6). Therefore, it is sufficient to show that condition (7) holds. The solution is given in the explicit form (22). Therefore, it exists for every h∈(0,¯¯¯h] and it is unique. Further, it belongs to Ω, due to the assumption that Ω is invariant.

The existence of ¯h such (21) holds follows from the compactness of Ω. In practice, it is determined from the condition of diagonal dominance using the boundedness of the variable x.

Theorem 5 is a useful tool in determining the the invariance of Ω under F(h,⋅).

It very common in applications that b≥0 and the nondiagonal entries of A, P(x), Q(x), x∈Ω are nonnegative, that is, these matrices are Metzler matrices. Then, assuming that (21) holds,

5 Application to a model in Mathematical Epidemiology

In this section we show how the theory and tools developed in Sections 2, 3 and 4 can be put together in deriving second order scheme with the properties a)–c) in Theorem 2. We note that properties a)–c) are of qualitative nature and do not follows from the standard numerical analysis theory involving stability, consistency and therefore convergence. While convergence as h→0 is expected, the computations are always done for some positive value of h. Hence, the importance that the main characteristics of the dynamical system are preserved as given in properties a)–c) for h∈(0,¯¯¯h]. While the theoretical existence of ¯¯¯h is important, deriving constructively value of ¯¯¯h is critical for any specific application. We show how the value of ¯¯¯h can be computed for the considered model. It should be noted that, while the numerical approach proposed in this paper is exemplified on the model considered in this section, its realm of application is not limited to it.

where Sv and Iv are the susceptible and infective vectors and S, I, R are the susceptible, invective and recovered (with temporary immunity) hosts, e.g. humans. All parameters are positive. Bearing in mind the units Λv, Λ are the recruitments, μv, μ - the death rates for vectors and hosts, respectively, p and q

are the probabilities of sufficient contact for transmission from host to vector and from vector to host, the average period of infectivity of host is

α−1, while the average duration of immunity of host is γ−1. Let us note that an additional parameter a in [13] is absorbed here in the parameters p and q.

The set of equations (26)–(30) defines a dynamical system on

where Mv and M are real numbers such that

It is easy so see, and it is also shown in [13], that for the populations Nv=Sv+Iv, N=S+I+R of vectors and hosts, respectively, we have

to reduce the asymptotic analysis of (

26)–(30) to asymptotic analysis of a system to two equations. We consider here the full system (26)–(30), since the goal is to compute accurately the trajectories for all finite times and not only their limit at t→+∞. Further, this illustrates that the applicability of the proposed numerical approach is not restricted in any way by the dimensionality of the system.

It remains to show the invariance of Ω. Considering that P, Q, A are Metzler matrices, we have that (25) holds. Therefore, it is sufficient to apply Theorem 5 on the part of the boundary defined by planes (34)–(35). Using (24), we have

The literature on high-order numerical methods for dynamical systems defined by ordinary differential equations is rich. However, these classical schemes can exhibit spurious/ghost solutions or other elementary instability that do not correspond to the feature of the continuous equations. We overcome this difficulty by constructing a time-reversible nonstandard finite difference (NSFD) scheme, with the classical denominator h≡Δt for the discrete derivative but a nonlocal discretization of the right-hand side of the differential equations. Our findings, directly applicable to mass action-type models in biology, are twofold. First, the NSFD scheme is second-order convergent and elementary stable. Second, we formulate a discrete analogue of the tangent condition under which it is shown that the NSFD scheme preserves the propriety of the continuous model stating that its feasible region is forward invariant.

Our future research includes extending this study to a dynamical system with nonhyperbolic equilibrium points, an approach considered in [6] as far as the stability for one-dimensional model is concerned.