Second-level randomness test based on the Kolmogorov-Smirnov test 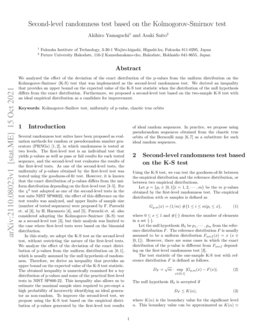 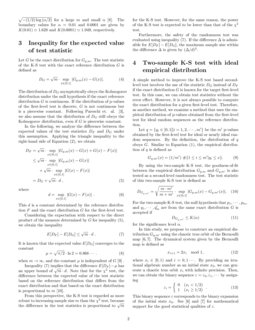 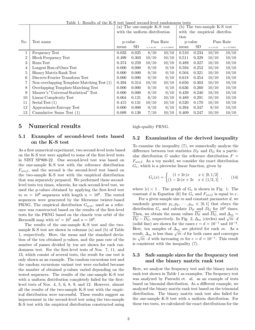 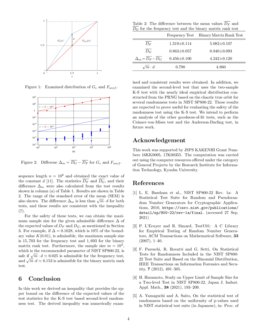 A Cramér-von Mises test of uniformity on the hypersphere

Testing uniformity of a sample supported on the hypersphere is one of th...
Eduardo García-Portugués, et al. ∙

In this paper we address the problem of designing online algorithms for ...
Deepan Muthirayan, et al. ∙

In this paper we address the problem of designing online algorithms for ...
Deepan Muthirayan, et al. ∙

Simultaneous test for Means: An Unblind Way to the F-test in One-way Analysis of Variance

After rejecting the null hypothesis in the analysis of variance, the nex...
Elsayed A. H. Elamir, et al. ∙

, but their analysis was limited to the case where first-level tests were based on the binomial distribution.

In this study, we adopt the K-S test as the second-level test, without restricting the nature of the first-level tests. We analyze the effect of the deviation of the exact distribution of p-values from the uniform distribution on [0,1]

, which is usually assumed by the null hypothesis of randomness. Therefore, we derive an inequality that provides an upper bound on the expected value of the K-S test statistic. The obtained inequality is numerically examined for a toy distribution of p-values and some of the practical first-level tests in NIST SP800-22. This inequality also allows us to estimate the maximal sample sizes required to pre-empt a high probability of incorrectly identifying an ideal generator as non-random. To improve the second-level test, we propose using the K-S test based on the empirical distribution of p-values generated by the first-level test results of ideal random sequences. In practice, we propose using pseudorandom sequences obtained from the chaotic true orbits of the Bernoulli map

[6, 7] as a substitute for such ideal random sequences.

2 Second-level randomness test based on the K-S test

Let p={pi∈[0,1]|i=1,2,⋯,m} be the m p-values obtained by the first-level randomness test. The empirical distribution with m samples is defined as

The test statistic of the one-sample K-S test with reference distribution F is defined as follows.

The null hypothesis H0 is accepted if

3 Inequality for the expected value of test statistic

In the following, we analyze the difference between the expected values of the test statistics DF and DG under this assumption. Applying the triangle inequality to the right-hand side of Equation (2), we obtain

This d is a constant determined by the reference distribution F and the exact distribution G for the first-level test.

Considering the expectation with respect to the direct product of the measure determined by G for inequality (5), we obtain the inequality

From this perspective, the K-S test is regarded as more robust to increasing sample size m than the χ2 test, because the difference in the test statistics is proportional to √m for the K-S test. However, for the same reason, the power of the K-S test is expected to be lower than that of the χ2 test.

Let q={qi∈[0,1]|i=1,2,⋯,m′} be the m′ p-values obtained by the first-level test for ideal or nearly ideal random sequences. By the definition, the distribution of q obeys G. Similar to Equation (1), the empirical distribution of q is defined as

For the two-sample K-S test, the null hypothesis that p1,⋯,pm, and q1,⋯,q′m are from the same exact distribution G is accepted if

for the significance level α.

In this study, we propose to construct an empirical distribution Gq,m′ using the chaotic true orbit of the Bernoulli map[6, 7]. The dynamical system given by the Bernoulli map is defined as

where xi∈[0,1) and i=0,1⋯. By providing an irrational algebraic number as an initial state x0, we can generate a chaotic true orbit xi with infinite precision. Then, we can obtain the binary sequence ε=ε0,ε1,⋯ by assigning

This binary sequence ε corresponds to the binary expansion of the initial state x0. See [6] and [7] for mathematical support for the good statistical qualities of ε.

5.1 Examples of second-level tests based on the K-S test

5.2 Examination of the derived inequality

To examine the inequality (7), we numerically analyze the difference between test statistics DF and DG for a particular distribution G under the reference distribution F=Funif. As a toy model, we consider the exact distribution Ge, which is a piecewise linear function, given by

5.3 Safe sample sizes for the frequency test and the binary matrix rank test

were also calculated from the test results shown in column (a) of Table 1. Results are shown in Table 2. The range of the standard error of the mean (SEM) is also shown. The difference

Δm is less than √m⋅d for both tests, and these results are consistent with the inequality (7).

For the safety of these tests, we can obtain the maximum sample size for the given admissible difference Δ of the expected values of DF and DG, as mentioned in Section 3. For example, if Δ=0.1628, which is 10% of the boundary value K(0.01), is admissible, the maximum sample size is 15,703 for the frequency test and 1,693 for the binary matrix rank test. Furthermore, the sample size m=103, which is the recommended parameter of NIST SP800-22, is safe if √m⋅d≃0.025 is admissible for the frequency test, and √m⋅d≃0.153 is admissible for the binary matrix rank test.

In this work we derived an inequality that provides the upper bound on the difference of the expected values of the test statistics for the K-S test based second-level randomness test. The derived inequality was numerically examined and consistent results were obtained. In addition, we examined the second-level test that uses the two-sample K-S test with the nearly ideal empirical distribution constructed from the PRNG based on the chaotic true orbit for several randomness tests in NIST SP800-22. These results are expected to prove useful for evaluating the safety of the randomness test using the K-S test. We intend to perform an analysis of the other goodness-of-fit tests, such as the Crámer-von-Mises test and the Anderson-Darling test, in future work.

This work was supported by JSPS KAKENHI Grant Numbers 16KK0005, 17K00355. The computation was carried out using the computer resources offered under the category of General Projects by the Research Institute for Information Technology, Kyushu University.