SearchQA: A New Q&A Dataset Augmented with Context from a Search Engine

We publicly release a new large-scale dataset, called SearchQA, for machine comprehension, or question-answering. Unlike recently released datasets, such as DeepMind CNN/DailyMail and SQuAD, the proposed SearchQA was constructed to reflect a full pipeline of general question-answering. That is, we start not from an existing article and generate a question-answer pair, but start from an existing question-answer pair, crawled from J! Archive, and augment it with text snippets retrieved by Google. Following this approach, we built SearchQA, which consists of more than 140k question-answer pairs with each pair having 49.6 snippets on average. Each question-answer-context tuple of the SearchQA comes with additional meta-data such as the snippet's URL, which we believe will be valuable resources for future research. We conduct human evaluation as well as test two baseline methods, one simple word selection and the other deep learning based, on the SearchQA. We show that there is a meaningful gap between the human and machine performances. This suggests that the proposed dataset could well serve as a benchmark for question-answering. 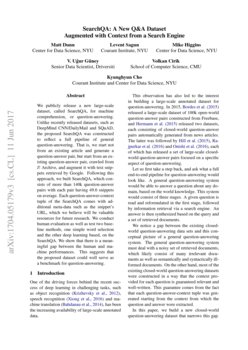 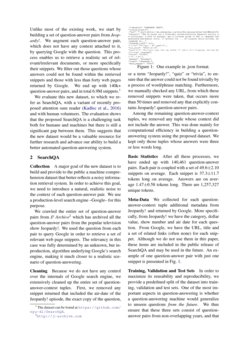 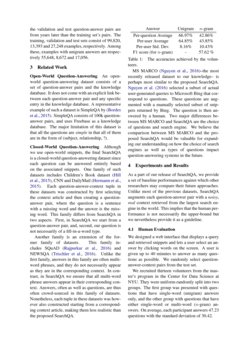 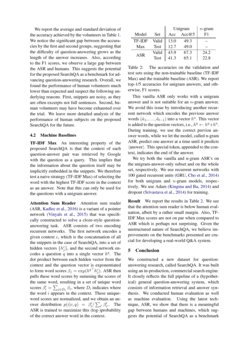 BiRdQA: A Bilingual Dataset for Question Answering on Tricky Riddles

A riddle is a question or statement with double or veiled meanings, foll...
Yunxiang Zhang, et al. ∙

One of the driving forces behind the recent success of deep learning in challenging tasks, such as object recognition (Krizhevsky et al., 2012), speech recognition (Xiong et al., 2016) and machine translation (Bahdanau et al., 2014), has been the increasing availability of large-scale annotated data.

Let us first take a step back, and ask what a full end-to-end pipeline for question-answering would look like. A general question-answering system would be able to answer a question about any domain, based on the world knowledge. This system would consist of three stages. A given question is read and reformulated in the first stage, followed by information retrieval via a search engine. An answer is then synthesized based on the query and a set of retrieved documents.

In this paper, we build a new closed-world question-answering dataset that narrows this gap. Unlike most of the existing work, we start by building a set of question-answer pairs from Jeopardy!. We augment each question-answer pair, which does not have any context attached to it, by querying Google with the question. This process enables us to retrieve a realistic set of relevant/irrelevant documents, or more specifically their snippets. We filter out those questions whose answers could not be found within the retrieved snippets and those with less than forty web pages returned by Google. We end up with 140k+ question-answer pairs, and in total 6.9M snippets.111 The dataset can be found at https://github.com/nyu-dl/SearchQA.

We evaluate this new dataset, to which we refer as SearchQA, with a variant of recently proposed attention sum reader (Kadlec et al., 2016) and with human volunteers. The evaluation shows that the proposed SearchQA is a challenging task both for humans and machines but there is still a significant gap between them. This suggests that the new dataset would be a valuable resource for further research and advance our ability to build a better automated question-answering system.

A major goal of the new dataset is to build and provide to the public a machine comprehension dataset that better reflects a noisy information retrieval system. In order to achieve this goal, we need to introduce a natural, realistic noise to the context of each question-answer pair. We use a production-level search engine –Google– for this purpose.

Because we do not have any control over the internals of Google search engine, we extensively cleaned up the entire set of question-answer-context tuples. First, we removed any snippet returned that included the air-date of the Jeopardy! episode, the exact copy of the question, or a term “Jeopardy!”, “quiz” or “trivia”, to ensure that the answer could not be found trivially by a process of word/phrase matching. Furthermore, we manually checked any URL, from which these removed snippets were taken, that occurs more than 50 times and removed any that explicitly contains Jeopardy! question-answer pairs.

Among the remaining question-answer-context tuples, we removed any tuple whose context did not include the answer. This was done mainly for computational efficiency in building a question-answering system using the proposed dataset. We kept only those tuples whose answers were three or less words long.

We collected for each question-answer-context tuple additional metadata from Jeopardy! and returned by Google. More specifically, from Jeopardy! we have the category, dollar value, show number and air date for each question. From Google, we have the URL, title and a set of related links (often none) for each snippet. Although we do not use them in this paper, these items are included in the public release of SearchQA and may be used in the future. An example of one question-answer pair with just one snippet is presented in Fig. 1.

Although we use open-world snippets, the final SearchQA is a closed-world question-answering dataset since each question can be answered entirely based on the associated snippets. One family of such datasets includes Children’s Book dataset (Hill et al., 2015), CNN and DailyMail (Hermann et al., 2015). Each question-answer-context tuple in these datasets was constructed by first selecting the context article and then creating a question-answer pair, where the question is a sentence with a missing word and the answer is the missing word. This family differs from SearchQA in two aspects. First, in SearchQA we start from a question-answer pair, and, second, our question is not necessarily of a fill-in-a-word type.

Another family is an extension of the former family of datasets. This family includes SQuAD (Rajpurkar et al., 2016) and NEWSQA (Trischler et al., 2016). Unlike the first family, answers in this family are often multi-word phrases, and they do not necessarily appear as they are in the corresponding context. In contrast, in SearchQA we ensure that all multi-word phrase answers appear in their corresponding context. Answers, often as well as questions, are thus often crowd-sourced in this family of datasets. Nonetheless, each tuple in these datasets was however also constructed starting from a corresponding context article, making them less realistic than the proposed SearchQA.

MS MARCO (Nguyen et al., 2016)–the most recently released dataset to our knowledge– is perhaps most similar to the proposed SearchQA. Nguyen et al. (2016) selected a subset of actual user-generated queries to Microsoft Bing that correspond to questions. These questions are augmented with a manually selected subset of snippets returned by Bing. The question is then answered by a human. Two major differences between MS MARCO and SearchQA are the choice of questions and search engine. We believe the comparison between MS MARCO and the proposed SearchQA would be valuable for expanding our understanding on how the choice of search engines as well as types of questions impact question-answering systems in the future.

As a part of our release of SearchQA, we provide a set of baseline performances against which other researchers may compare their future approaches. Unlike most of the previous datasets, SearchQA augments each question-answer pair with a noisy, real context retrieved from the largest search engine in the world. This implies that the human performance is not necessarily the upper-bound but we nevertheless provide it as a guideline.

We designed a web interface that displays a query and retrieved snippets and lets a user select an answer by clicking words on the screen. A user is given up to 40 minutes to answer as many questions as possible. We randomly select question-answer-context pairs from the test set.

-gram) answers. On average, each participant answers 47.23 questions with the standard deviation of 30.42.

We report the average and standard deviation of the accuracy achieved by the volunteers in Table 1. We notice the significant gap between the accuracies by the first and second groups, suggesting that the difficulty of question-answering grows as the length of the answer increases. Also, according to the F1 scores, we observe a large gap between the ASR and humans. This suggests the potential for the proposed SearchQA as a benchmark for advancing question-answering research. Overall, we found the performance of human volunteers much lower than expected and suspect the following underlying reasons. First, snippets are noisy, as they are often excerpts not full sentences. Second, human volunteers may have become exhausted over the trial. We leave more detailed analysis of the performance of human subjects on the proposed SearchQA for the future.

An interesting property of the proposed SearchQA is that the context of each question-answer pair was retrieved by Google with the question as a query. This implies that the information about the question itself may be implicitly embedded in the snippets. We therefore test a naive strategy (TF-IDF Max) of selecting the word with the highest TF-IDF score in the context as an answer. Note that this can only be used for the questions with a unigram answer.

, which is the concatenation of all the snippets in the case of SearchQA, into a set of hidden vectors

{hcj}, and the second network encodes a question q into a single vector hq. The dot product between each hidden vector from the context and the question vector is exponentiated to form word scores βj=exp(hq⊤hcj). ASR then pulls these word scores by summing the scores of the same word, resulting in a set of unique word scores β′i=∑j∈Diβj, where Di indicates where the word i appears in the context. These unique-word scores are normalized, and we obtain an answer distribution p(i|c,q)=β′i/∑i′β′i′

. The ASR is trained to maximize this (log-)probability of the correct answer word in the context.

This vanilla ASR only works with a unigram answer and is not suitable for an n-gram answer. We avoid this issue by introducing another recurrent network which encodes the previous answer words (^a1,…,^al−1) into a vector ha. This vector is added to the question vectors, i.e., hq←hq+ha

. During training, we use the correct previou answer words, while we let the model, called n-gram ASR, predict one answer at a time until it predicts

⟨answer⟩. This special token, appended to the context, indicates the end of the answer.

We try both the vanilla and n-gram ASR’s on the unigram-answer-only subset and on the whole set, respectively. We use recurrent networks with 100 gated recurrent units

We report the results in Table 2. We see that the attention sum reader is below human evaluation, albeit by a rather small margin. Also, TF-IDF Max scores are not on par when compared to ASR which is perhaps not surprising. Given the unstructured nature of SearchQA, we believe improvements on the benchmarks presented are crucial for developing a real-world Q&A system.

We constructed a new dataset for question-answering research, called SearchQA. It was built using an in-production, commercial search engine. It closely reflects the full pipeline of a (hypothetical) general question-answering system, which consists of information retrieval and answer synthesis. We conducted human evaluation as well as machine evaluation. Using the latest technique, ASR, we show that there is a meaningful gap between humans and machines, which suggests the potential of SearchQA as a benchmark task for question-answering research. We release SearchQA publicly, including our own implementation of ASR and n-gram ASR in PyTorch.

KC thanks support by Google, NVIDIA, eBay and Facebook. MD conducted this work as a part of DS-GA 1010: Independent Study in Data Science at the Center for Data Science, New York University.