The choice of activation functions in deep networks has a significant effect on the training dynamics and task performance. Currently, the most successful and widely-used activation function is the Rectified Linear Unit (ReLU). Although various hand-designed alternatives to ReLU have been proposed, none have managed to replace it due to inconsistent gains. In this work, we propose to leverage automatic search techniques to discover new activation functions. Using a combination of exhaustive and reinforcement learning-based search, we discover multiple novel activation functions. We verify the effectiveness of the searches by conducting an empirical evaluation with the best discovered activation function. Our experiments show that the best discovered activation function, f(x) = x ·sigmoid(β x), which we name Swish, tends to work better than ReLU on deeper models across a number of challenging datasets. For example, simply replacing ReLUs with Swish units improves top-1 classification accuracy on ImageNet by 0.9% for Mobile NASNet-A and 0.6% for Inception-ResNet-v2. The simplicity of Swish and its similarity to ReLU make it easy for practitioners to replace ReLUs with Swish units in any neural network. 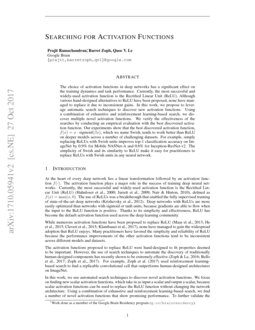 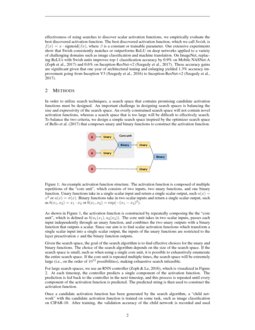 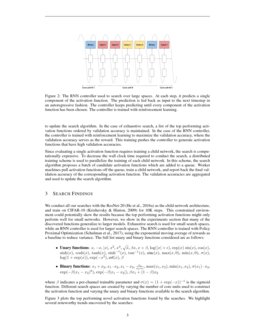 A modern PyTorch implementation of SRGAN

f(⋅). The activation function plays a major role in the success of training deep neural networks. Currently, the most successful and widely-used activation function is the Rectified Linear Unit (ReLU) (Hahnloser et al., 2000; Jarrett et al., 2009; Nair & Hinton, 2010), defined as f(x)=max(x,0). The use of ReLUs was a breakthrough that enabled the fully supervised training of state-of-the-art deep networks (Krizhevsky et al., 2012)

. Deep networks with ReLUs are more easily optimized than networks with sigmoid or tanh units, because gradients are able to flow when the input to the ReLU function is positive. Thanks to its simplicity and effectiveness, ReLU has become the default activation function used across the deep learning community.

The activation functions proposed to replace ReLU were hand-designed to fit properties deemed to be important. However, the use of search techniques to automate the discovery of traditionally human-designed components has recently shown to be extremely effective (Zoph & Le, 2016; Bello et al., 2017; Zoph et al., 2017). For example, Zoph et al. (2017) used reinforcement learning-based search to find a replicable convolutional cell that outperforms human-designed architectures on ImageNet.

for 10K steps. This constrained environment could potentially skew the results because the top performing activation functions might only perform well for small networks. However, we show in the experiments section that many of the discovered functions generalize to larger models. Exhaustive search is used for small search spaces, while an RNN controller is used for larger search spaces. The RNN controller is trained with Policy Proximal Optimization

, using the exponential moving average of rewards as a baseline to reduce variance. The full list unary and binary functions considered are as follows:

is the sigmoid function. Different search spaces are created by varying the number of core units used to construct the activation function and varying the unary and binary functions available to the search algorithm.

Since the activation functions were found using a relatively small child network, their performance may not generalize when applied to bigger models. To test the robustness of the top performing novel activation functions to different architectures, we run additional experiments using the preactivation ResNet-164 (RN) (He et al., 2016b), Wide ResNet 28-10 (WRN) (Zagoruyko & Komodakis, 2016), and DenseNet 100-12 (DN) (Huang et al., 2017)

models. We implement the 3 models in TensorFlow and replace the ReLU function with each of the top novel activation functions discovered by the searches. We use the same hyperparameters described in each work, such as optimizing using SGD with momentum, and follow previous works by reporting the median of 5 different runs.

While these results are promising, it is still unclear whether the discovered activation functions can successfully replace ReLU on challenging real world datasets. In order to validate the effectiveness of the searches, in the rest of this work we focus on empirically evaluating the activation function f(x)=x⋅σ(βx), which we call Swish. We choose to extensively evaluate Swish instead of max(x,σ(x)) because early experimentation showed better generalization for Swish. In the following sections, we analyze the properties of Swish and then conduct a thorough empirical evaluation comparing Swish, ReLU, and other candidate baseline activation functions on number of large models across a variety of tasks.

To recap, Swish is defined as x⋅σ(βx), where σ(z)=(1+exp(−z))−1 is the sigmoid function and β is either a constant or a trainable parameter. Figure 5 plots the graph of Swish for different values of β. If β=1, Swish is equivalent to the Sigmoid-weighted Linear Unit (SiL) of Elfwing et al. (2017) that was proposed for reinforcement learning. If β=0, Swish becomes the scaled linear function f(x)=x2. As β→∞, the sigmoid component approaches a 0-1

β is set as a trainable parameter.

The first derivative of Swish is shown in Figure 5 for different values of β. The scale of β controls how fast the first derivative asymptotes to 0 and 1. When β=1, the derivative has magnitude less than 1 for inputs that are less than around 1.25. Thus, the success of Swish with β=1 implies that the gradient preserving property of ReLU (i.e., having a derivative of 1 when x>0) may no longer be a distinct advantage in modern architectures.

The most striking difference between Swish and ReLU is the non-monotonic “bump” of Swish when x<0. As shown in Figure 7, a large percentage of preactivations fall inside the domain of the bump (−5≤x≤0), which indicates that the non-monotonic bump is an important aspect of Swish. The shape of the bump can be controlled by changing the β parameter. While fixing β=1 is effective in practice, the experiments section shows that training β can further improve performance on some models. Figure 7 plots distribution of trained β values from a Mobile NASNet-A model (Zoph et al., 2017). The trained β values are spread out between 0 and 1.5 and have a peak at β≈1, suggesting that the model takes advantage of the additional flexibility of trainable β parameters.

Practically, Swish can be implemented with a single line code change in most deep learning libraries, such as TensorFlow (Abadi et al., 2016) (e.g., x * tf.sigmoid(beta * x) or tf.nn.swish(x) if using a version of TensorFlow released after the submission of this work). As a cautionary note, if BatchNorm (Ioffe & Szegedy, 2015) is used, the scale parameter should be set. Some high level libraries turn off the scale parameter by default due to the ReLU function being piecewise linear, but this setting is incorrect for Swish. For training Swish networks, we found that slightly lowering the learning rate used to train ReLU networks works well.

We benchmark Swish against ReLU and a number of recently proposed activation functions on challenging datasets, and find that Swish matches or exceeds the baselines on nearly all tasks. The following sections will describe our experimental settings and results in greater detail. As a summary, Table 3 shows Swish in comparison to each baseline activation function we considered (which are defined in the next section). The results in Table 3 are aggregated by comparing the performance of Swish to the performance of different activation functions applied to a variety of models, such as Inception ResNet-v2 (Szegedy et al., 2017) and Transformer (Vaswani et al., 2017), across multiple datasets, such as CIFAR, ImageNet, and English→German translation.111To avoid skewing the comparison, each model type is compared just once. A model with multiple results is represented by the median of its results. Specifically, the models with aggregated results are (a) ResNet-164, Wide ResNet 28-10, and DenseNet 100-12 across the CIFAR-10 and CIFAR-100 results, (b) Mobile NASNet-A and Inception-ResNet-v2 across the 3 runs, and (c) WMT Transformer model across the 4 newstest results. The improvement of Swish over other activation functions is statistically significant under a one-sided paired sign test.

We evaluate both Swish with a trainable β and Swish with a fixed β=1 (which for simplicity we call Swish-1, but it is equivalent to the Sigmoid-weighted Linear Unit of Elfwing et al. (2017)). Note that our results may not be directly comparable to the results in the corresponding works due to differences in our training setup.

We first compare Swish to all the baseline activation functions on the CIFAR-10 and CIFAR-100 datasets (Krizhevsky & Hinton, 2009). We follow the same set up used when comparing the activation functions discovered by the search techniques, and compare the median of 5 runs with the preactivation ResNet-164 (He et al., 2016b), Wide ResNet 28-10 (WRN) (Zagoruyko & Komodakis, 2016), and DenseNet 100-12 (Huang et al., 2017) models.

The results in Tables 5 and 5 show how Swish and Swish-1 consistently matches or outperforms ReLU on every model for both CIFAR-10 and CIFAR-100. Swish also matches or exceeds the best baseline performance on almost every model. Importantly, the “best baseline” changes between different models, which demonstrates the stability of Swish to match these varying baselines. Softplus, which is smooth and approaches zero on one side, similar to Swish, also has strong performance.

Next, we benchmark Swish against the baseline activation functions on the ImageNet 2012 classification dataset (Russakovsky et al., 2015). ImageNet is widely considered one of most important image classification datasets, consisting of a 1,000 classes and 1.28 million training images. We evaluate on the validation dataset, which has 50,000 images.

The results in Tables 6-10 show strong performance for Swish. On Inception-ResNet-v2, Swish outperforms ReLU by a nontrivial 0.5%. Swish performs especially well on mobile sized models, with a 1.4% boost on Mobile NASNet-A and a 2.2% boost on MobileNet over ReLU. Swish also matches or exceeds the best performing baseline on most models, where again, the best performing baseline differs depending on the model. Softplus achieves accuracies comparable to Swish on the larger models, but performs worse on both mobile sized models. For Inception-v4, the gains from switching between activation functions is more limited, and Swish slightly underperforms Softplus and ELU. In general, the results suggest that switching to Swish improves performance with little additional tuning.

We additionally benchmark Swish on the domain of machine translation. We train machine translation models on the standard WMT 2014 English→German dataset, which has 4.5 million training sentences, and evaluate on 4 different newstest sets using the standard BLEU metric. We use the attention based Transformer (Vaswani et al., 2017) model, which utilizes ReLUs in a 2-layered feedforward network between each attention layer. We train a 12 layer “Base Transformer” model with 2 different learning rates444We tried an additional learning rate for Softplus, but found it did not work well across all learning rates. for 300K steps, but otherwise use the same hyperparameters as in the original work, such as using Adam (Kingma & Ba, 2015) to optimize.

Table 11 shows that Swish outperforms or matches the other baselines on machine translation. Swish-1 does especially well on newstest2016, exceeding the next best performing baseline by 0.6 BLEU points. The worst performing baseline function is Softplus, demonstrating inconsistency in performance across differing domains. In contrast, Swish consistently performs well across multiple domains.

Our study shows that Swish consistently outperforms ReLU on deep models. The strong performance of Swish challenges conventional wisdom about ReLU. Hypotheses about the importance of the gradient preserving property of ReLU seem unnecessary when residual connections

(He et al., 2016a) enable the optimization of very deep networks. A similar insight can be found in the fully attentional Transformer (Vaswani et al., 2017), where the intricately constructed LSTM cell (Hochreiter & Schmidhuber, 1997) is no longer necessary when constant-length attentional connections are used. Architectural improvements lessen the need for individual components to preserve gradients.

In this work, we utilized automatic search techniques to discover novel activation functions that have strong empirical performance. We then empirically validated the best discovered activation function, which we call Swish and is defined as f(x)=x⋅sigmoid(βx). Our experiments used models and hyperparameters that were designed for ReLU and just replaced the ReLU activation function with Swish; even this simple, suboptimal procedure resulted in Swish consistently outperforming ReLU and other activation functions. We expect additional gains to be made when these models and hyperparameters are specifically designed with Swish in mind. The simplicity of Swish and its similarity to ReLU means that replacing ReLUs in any network is just a simple one line code change.