We propose a feature generator backbone composed of an ensemble of convolutional neuralnetworks (CNNs) to improve the recently emerging Vision Transformer (ViT) models. We tackled the RSNA intracranial hemorrhage classification problem, i.e., identifying various hemorrhage types from computed tomography (CT) slices. We show that by gradually stacking several feature maps extracted using multiple Xception CNNs, we can develop a feature-rich input for the ViT model. Our approach allowed the ViT model to pay attention to relevant features at multiple levels. Moreover, pretraining the n CNNs using various paradigms leads to a diverse feature set and further improves the performance of the proposed n-CNN-ViT. We achieved a test accuracy of 98.04 architecture is modular and scalable in both the number of CNNs used for feature extraction and the size of the ViT. 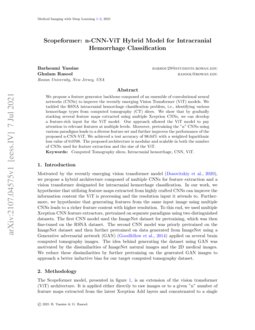 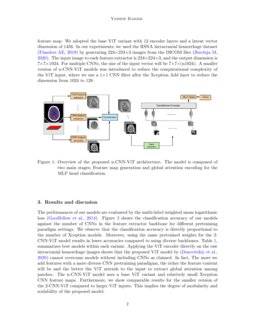 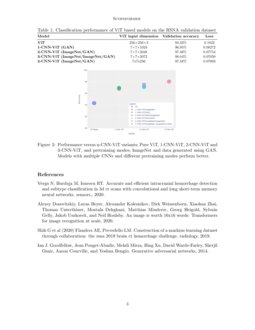 The problems with using STNs to align CNN feature maps

Fusion of CNNs and statistical indicators to improve image classification

The aim of this work is to propose an ensemble of descriptors for Melano...
Loris Nanni, et al. ∙

Is it possible to recover an image from its noisy version using convolut...
Nithish Divakar, et al. ∙

, we propose a hybrid architecture composed of multiple CNNs for feature extraction and a vision transformer designated for intracranial hemorrhage classification. In our work, we hypothesize that utilizing feature maps extracted from highly crafted CNNs can improve the information content the ViT is processing and the resolution input it attends to. Furthermore, we hypothesize that generating features from the same input image using multiple CNNs leads to a richer feature content with higher resolution. To this end, we used multiple Xception CNN feature extractors, pretrained on separate paradigms using two distinguished datasets. The first CNN model used the ImageNet dataset for pretraining, which was then fine-tuned on the RSNA dataset. The second CNN model was priorly pretrained on the ImageNet dataset and then further pretrained on data generated from ImageNet using a Generative adversarial network (GAN)

The Scopeformer model, presented in figure 1

, is an extension of the vision transformer (ViT) architecture. It is applied either directly to raw images or to a given ”n” number of feature maps extracted from the latest Xception Add layers and concatenated to a single feature map. We adopted the base ViT variant with 12 encoder layers and a latent vector dimension of 1456. In our experiments, we used the RSNA intracranial hemorrhage dataset

[RSNA] by generating 224×224×3 images from the DICOM files [loss]. The input image to each feature extractor is 224×224×3, and the output dimension is 7×7×1024. For multiple CNNs, the size of the input vector will be 7×7×(n1024). A smaller version of n-CNN-ViT models was introduced to reduce the computational complexity of the ViT input, where we use a 1×1 CNN filter after the Xception Add layer to reduce the dimension from 1024 to 128.

The performances of our models are evaluated by the multi-label weighted mean logarithmic loss [gan-paper]. Figure 2 shows the classification accuracy of our models against the number of CNNs in the feature extractor backbone for different pretraining paradigm settings. We observe that the classification accuracy is directly proportional to the number of Xception models. Moreover, using the same pretrained weights for the 2-CNN-ViT model results in lower accuracies compared to using diverse backbones. Table 1, summarizes best models within each variant. Applying the ViT encoder directly on the raw intracranial hemorrhage images shows that the proposed ViT model by [vit-paper] cannot overcome models without including CNNs as claimed. In fact, The more we add features with a more diverse CNN pretraining paradigms, the richer the feature content will be and the better the ViT attends to the input to extract global attention among patches. The n-CNN-ViT model uses a base ViT variant and relatively small Xception CNN feature maps. Furthermore, we show comparable results for the smaller version of the 2-CNN-ViT compared to larger ViT inputs. This implies the degree of modularity and scalability of the proposed model.