In this work, we announce a comprehensive well curated and opensource dataset with millions of samples for pre-college and college level problems in mathematicsand science. A preliminary set of results using transformer architecture with character to character encoding is shown. The dataset identifies some challenging problem and invites research on better architecture search 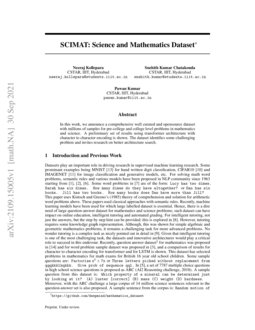 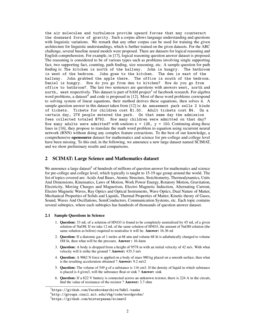 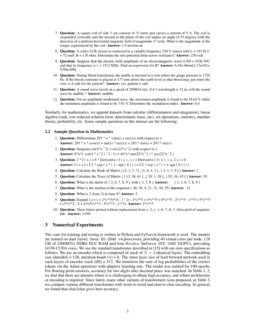 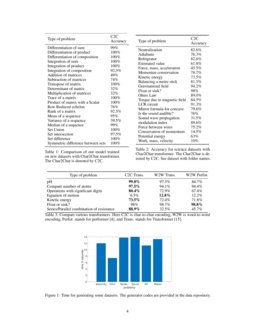 We incorporate Tensor-Product Representations within the Transformer in ...
Imanol Schlag, et al. ∙

A Roadmap for the Value-Loading Problem

We analyze the value-loading problem. This is the problem of encoding mo...
Lê Nguyên Hoang, et al. ∙

imagenet for image classification and generative models, etc. For solving math word problems, semantic rules and various models have been proposed in NLP community since 1963 starting from bobrow , briars1984 , feigenbaum1963computers . Some word problems in fletcher1985 are of the form: Lucy has two dimes. Sarah has six dimes. How many dimes do they have altogether? or Dan has six books. Jill has two books. How many books does Dan have more than Jill? This paper uses Kintsch and Greeno’s (1985) theory of comprehension and solution for arithmetic word problems above. These papers used classical approaches with semantic rules. Recently, machine learning models have been used for which large labelled dataset is essential. Hence, there is a dire need of large question-answer dataset for mathematics and science problems; such dataset can have impact on online education, intelligent tutoring and automated grading. For intelligent tutoring, not just the answers, but the step by step hint can be provided; this is explored in kang2016

. However, tutoring requires some knowledge graph representation. Although, this was shown for simple algebraic and geometric mathematics problems, it remains a challenging task for more advanced problems. No wonder tutoring is a complex task as nicely pointed out in detail in

kenneth2013 . Given that intelligent tutoring is one of the most challenging task, the datasets and innovative architectures would play a critical role to succeed in this endevour. Recently, question answer dataset222https://github.com/deepmind/mathematics_dataset for mathematics was proposed in AnalysingMR and for word problem sample dataset was proposed in SMWPSDL1 , and a comparison of results for character to character encoding for transformer and for LSTM is shown. This dataset has selected problems in mathematics for math exams for British 16 year old school children. Some sample questions are: Factorise x2+7x or Three letters picked without replacement from qqqkkklkqkkk. Give prob of sequence qql. In clark2018think , a set of 7787 multiple choice questions in high school science questions is proposed as ARC (AI2 Reasoning challenge, 2018). A sample question from this dataset is: Which property of a mineral can be determined just by looking at it? (A) luster [correct] (B) mass (C) weight (D) hardness. Moreover, with the ARC challenge a large corpus of 14 million science sentences relevant to the question-answer set is also proposed. A sample sentence from the corpus is: Random motion of the air molecules and turbulence provide upward forces that may counteract the downward force of gravity. Such a corpus allows language understanding and questions with linguistic variations. We remark that any other corpus can be used for training the given architecture for linguistic understandings, which is further trained on the given datasets. For the ARC challenge, several baseline neural models were proposed. There are datasets for logical reasoning and English comprehension. For example, in weston2015aicomplete , logical reasoning question answer dataset is proposed. The reasoning is considered to be of various types such as problems involving single supporting fact, two supporting fact, counting, path finding, size reasoning, etc. A sample question for path finding is: The kitchen is north of the hallway. John is hungry. The bathroom is west of the bedroom. John goes to the kitchen. The den is east of the hallway. John grabbed the apple there. The office is south of the bedroom. Daniel is hungry. How do you go from den to kitchen? How do you go from office to bathroom?. The last two sentences are questions with answers west, north and north, west respectively. This dataset is part of bAbI project333https://github.com/facebookarchive/bAbI-tasks of facebook research. For algebra word problems, a dataset444http://groups.csail.mit.edu/rbg/code/wordprobs/ and code is proposed in kushman-etal-2014-learning . Most of these word problems correspond to solving system of linear equations, their method derives these equations, then solves it. A sample question answer in this dataset taken from kushman-etal-2014-learning is: An amusement park sells 2 kinds of tickets. Tickets for children cost $1.50. Adult tickets cost $4. On a certain day, 278 people entered the park. On that same day the admission fees collected totaled $792. How many children were admitted on that day? How many adults were admitted? with soutions x = 128, y = 150. Continuing along these lines in wang-etal-2017-deep

, they propose to translate the math word problem to equation using recurrent neural network (RNN) without doing any complex feature extractions. To the best of our knowledge, a comprehensive

opensource dataset for mathematics and science for pre-college and college level have been missing. To this end, in the following, we announce a new large dataset named SCIMAT, and we show preliminary results and comparisons.

The code for training and testing is written in Python and PyTorch framework is used. The models are trained on dual Intel Xeon E5-2640 v4 processors, providing 40 virtual cores per node, 128 GB of 2400MT/s DDR4 ECC RAM and four Nvidia GeForce GTX 1080 TiGPUs, providing 14336 CUDA cores. We use the standard transformer described in vaswani2017 with our own specifications as follows. We use an encoder which is composed of stack of N=4 identical layers. The embedding size (dmodel) = 128, attention heads (h

) = 8. The inner layer size of feed forward network used in each layers of encoder stack (dff) = 512. We minimize the sum of log probabilities of the correct tokens via the Adam optimizer with adaptive learning rate. The model was trained for 100 epochs. For floating point answers, accuracy for two digits after decimal place was matched. In Table

2, 2, we find that there are datasets where it is challenging to obtain high accuracy, and robust architecture or encoding is required. Since lately, many other variants of transformers were proposed, in Table 3, we compare various different transformer with word-to-word and char-to-char encoding. In general, we found that char2char gives best accuracy.

This work was done at IIIT, Hyderabad. The authors acknowledge all the support of the institute.