We study the construction of the theoretical foundation of model comparison for ergodic stochastic differential equation (SDE) models and an extension of the applicable scope of the conventional Bayesian information criterion. Different from previous studies, we suppose that the candidate models are possibly misspecified models, and we consider both Wiener and a pure-jump Lévy noise driven SDE. Based on the asymptotic behavior of the marginal quasi-log likelihood, the Schwarz type statistics and stepwise model selection procedure are proposed. We also prove the model selection consistency of the proposed statistics with respect to an optimal model. We conduct some numerical experiments and they support our theoretical findings. 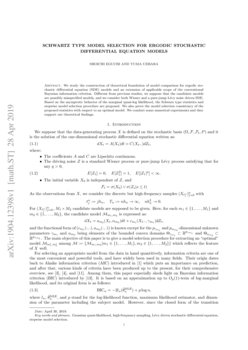 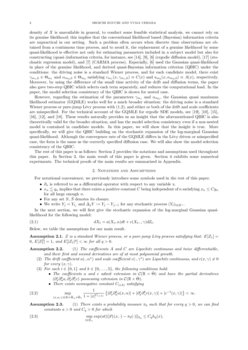 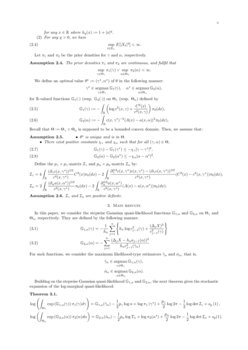 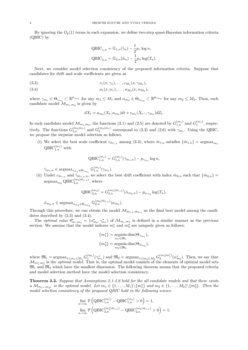 A Tractable Fully Bayesian Method for the Stochastic Block Model

We suppose that the data-generating process X is defined on the stochastic basis (Ω,F,Ft,P) and it is the solution of the one-dimensional stochastic differential equation written as:

As the observations from X, we consider the discrete but high-frequency samples (Xtnj)nj=0 with

and the functional form of (cm1(⋅,⋅),am2(⋅,⋅)) is known except for the pγm1 and pαm2-dimensional unknown parameters γm1 and αm2 being elements of the bounded convex domains Θγm1⊂Rpγm1 and Θαm2⊂Rpαm2. The main objective of this paper is to give a model selection procedure for extracting an “optimal” model Mm⋆1,m⋆2 among M:={Mm1,m2|m1∈{1,…,M1},m2∈{1,…,M2}} which reflects the feature of X well.

For selecting an appropriate model from the data in hand quantitively, information criteria are one of the most convenient and powerful tools, and have widely been used in many fields. Their origin dates back to Akaike information criterion (AIC) introduced in [1] which puts an importance on prediction, and after that, various kinds of criteria have been produced up to the present, for their comprehensive overview, see [3], [4], and [11]. Among them, this paper especially sheds light on Bayesian information criterion (BIC) introduced by [13]. It is based on an approximation up to Op(1)-term of log-marginal likelihood, and its original form is as follows:

stand for the log-likelihood function, maximum likelihood estimator, and dimension of the parameter including the subject model. However, since the closed form of the transition density of

X is unavailable in general, to conduct some feasible statistical analysis, we cannot rely on its genuine likelihood; this implies that the conventional likelihood based (Bayesian) information criteria are unpractical in our setting. Such a problem often occurs when discrete time observations are obtained from a continuous time process, and to avoid it, the replacement of a genuine likelihood by some quasi-likelihood is effective not only for estimating parameters included in a subject model but also for constructing (quasi-)information criteria, for instance, see [14], [9], [6] (ergodic diffusion model), [17] (stochastic regression model), and [7] (CARMA process). Especially, [6] used the Gaussian quasi-likelihood in place of the genuine likelihood, and derived quasi-Bayesian information criterion (QBIC) under the conditions: the driving noise is a standard Wiener process, and for each candidate model, there exist γm1,0∈Θm1 and αm2,0∈Θm2 satisfying cm1(x,γm1,0)≡C(x) and am2(x,αm2,0)≡A(x), respectively. Moreover, by using the difference of the small time activity of the drift and diffusion terms, the paper also gave two-step QBIC which selects each term separately, and reduces the computational load. In the paper, the model selection consistency of the QBIC is shown for nested case.

However, regarding the estimation of the parameters γm1 and αm2, the Gaussian quasi maximum likelihood estimator (GQMLE) works well for a much broader situation: the driving noise is a standard Wiener process or pure-jump Lévy process with (1.2), and either or both of the drift and scale coefficients are misspecified. For the technical account of the GQMLE for ergodic SDE models, see [19], [10], [15], [16], [12], and [18]. These results naturally provides us an insight that the aforementioned QBIC is also theoretically valid for the broader situation, and has the model selection consistency even if a non-nested model is contained in candidate models. In this paper, we will show that the insight is true. More specifically, we will give the QBIC building on the stochastic expansion of the log-marginal Gaussian quasi-likelihood. Although the convergence rate of the GQMLE differs in the Lévy driven or misspecified case, the form is the same as the correctly specified diffusion case. We will also show the model selection consistency of the QBIC.

For notational convenience, we previously introduce some symbols used in the rest of this paper.

In the next section, we will first give the stochastic expansion of the log-marginal Gaussian quasi-likelihood for the following model:

Below, we table the assumptions for our main result.

Let π1 and π2 be the prior densities for γ and α, respectively.

The prior densities π1 and π2 are continuous, and fullfil that

We define an optimal value θ⋆:=(γ⋆,α⋆) of θ in the following manner:

Recall that Θ:=Θγ×Θα is supposed to be a bounded convex domain. Then, we assume that:

In this paper, we consider the stepwise Gaussian quasi-likelihood functions G1,n and G2,n on Θγ and Θα, respectively. They are defined by the following manner:

For such functions, we consider the maximum likelihood-type estimators ^γn and ^αn, that is,

By ignoring the Op(1) terms in each expansion, we define two-step quasi-Bayesian information criteria (QBIC) by

Next, we consider model selection consistency of the proposed information criteria. Suppose that candidates for drift and scale coefficients are given as

Through this procedure, we can obtain the model M^m1,n,^m2,n as the final best model among the candidates described by (3.3) and (3.4).

The optimal value θ⋆m1,m2=(α⋆m2,γ⋆m1) of Mm1,m2 is defined in a similar manner as the previous section. We assume that the model indexes m⋆1 and m⋆2 are uniquely given as follows:

Suppose that Assumptions 2.1-2.6 hold for the all candidate models and that these exists a Mm1⋆,m2⋆ is the optimal model. Let m1∈{1,…,M1}∖{m⋆1} and m2∈{1,…,M2}∖{m⋆2}. Then the model selection consistency of the proposed QBIC hold in the following senses.

The model weight can be used to empirically quantify relative frequency(percentage) of the model selection from a single data set. The model which has the highest wm1,m2 value is the most probable model. Because of the (4.2), wm1,m2 satisfies the equation ∑M1k=1∑M2ℓ=1wk,ℓ=1.

where Tn=nhn, and w is a one-dimensional standard Wiener process. We consider the following diffusion(Diff) and drift(Drif) coefficients:

Each candidate model is given by a combination of diffusion and drift coefficients; for example, in the case of Diff 1 and Drif 1, we consider the statistical model

In this example, although the candidate models do not include the true model, the optimal parameter (γ⋆m1,α⋆m2) and optimal model indexes m⋆1 and m⋆2 can be obtained by the functions

Proof of Theorem 3.1 In the following, we consider the zero-extended version of G1,n(γ) and π1(γ) just for the simplicity of the following discussion. Applying the change of variable, we have

Below we show that

For a fixed positive constant δ, we divide Rpγ into

First we look at the integration on D1,n. Taylor’s expansion around ^γn gives

Here, for any t∈D1,n, the second term of the right-hand-side is bounded by

We hereafter write the set E⊂Ω on which these convergence holds. For simplicity, we write