Scheme-theoretic Approach to Computational Complexity I. The Separation of P and NP

We lay the foundations of a new theory for algorithms and computational complexity by parameterizing the instances of a computational problem as a moduli scheme. Considering the geometry of the scheme associated to 3-SAT, we separate P and NP. 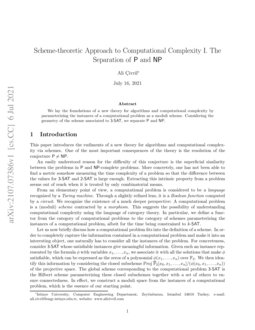 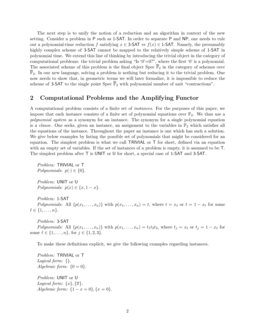 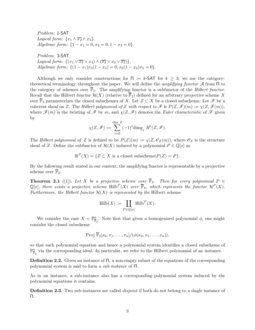 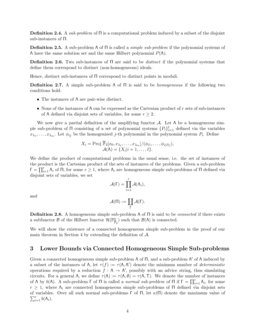 This paper introduces the rudiments of a new theory for algorithms and computational complexity via schemes. One of the most important consequences of the theory is the resolution of the conjecture P≠NP.

The theory envisions a computational problem as a (moduli) scheme formed by its instances, and an algorithm as a morphism contracting the computational problem at hand to a single point. For concreteness, consider a satisfiable instance of 3-SAT represented by the formula ϕ with variables x1,…,xn. We associate this instance with all the solutions that make ϕ satisfiable, which can be expressed as the zeros of a polynomial ϕ(x1,…,xn) over F2. We then identify this information by considering the closed subscheme Proj ¯¯¯F2[x0,x1,…,xn]/(ϕ(x0,x1,…,xn)). The global scheme corresponding to the computational problem 3-SAT is the Hilbert scheme parameterizing these closed subschemes together with a set of others to ensure connectedness.

The next step is to unify the notion of a reduction and an algorithm in the new setting. Consider 1-SAT ∈ P. In order to separate P and NP, one needs to rule out a polynomial-time reduction f satisfying x∈3-SAT⇔f(x)∈1-SAT. We extend this line of thinking by introducing the trivial object in the category of computational problems: the trivial problem asking “Is ‘0’=0?”, where the first ‘0’ is a polynomial. The associated scheme of this problem is the final object Spec ¯¯¯F2 in the category of schemes over ¯¯¯F2. In our new language, solving a problem is nothing but reducing it to the trivial problem. One then needs to show that, in geometric terms we will later formalize, it is impossible to reduce the scheme of 3-SAT to the single point Spec ¯¯¯F2 with polynomial number of unit contractions.

2 Computational Problems and the Amplifying Functor

A computational problem consists of a set of instances. In this paper we impose that each instance consists of a finite set of polynomial equations over F2. We thus use a polynomial system as a synonym for an instance. The synonym for a single polynomial equation is a clause. One seeks, given an instance, an assignment to the variables in F2 satisfying all the equations of the instance. Throughout the paper an instance is one which has such a solution. We give below examples by listing the possible set of polynomials that might be considered for an equation. The simplest problem is what we call TRIVIAL or T for short, defined via an equation with an empty set of variables. If the set of instances of a problem is empty, it is assumed to be T. The simplest problem after T is UNIT or U for short, a special case of 1-SAT and 3-SAT.

Problem: UNIT or U

For the sake of explicitness, we give the following examples regarding instances.

Problem: UNIT or U

We consider the computational problem Π:= k-SAT. We will define the amplifying functor from Π to the category of schemes over ¯¯¯F2, which is a subfunctor of the Hilbert functor. The Hilbert functor H(X) (relative to ¯¯¯F2) defined for a projective scheme X over ¯¯¯F2 parameterizes the closed subschemes of X. Let Z⊂X be a closed subscheme. Let F be a coherent sheaf on Z. The Hilbert polynomial of Z with respect to F is P(Z,F)(m):=χ(Z,F(m)), where F(m) is the twisting of F by m, and χ(Z,F) denotes the Euler characteristic of F given by

The Hilbert polynomial of Z is P(Z)(m):=χ(Z,OZ(m)), where OZ is the structure sheaf of Z. Define the subfunctor of H(X) induced by a polynomial P∈Q[x] as

By the following result stated in our context, the amplifying functor is representable by a projective scheme over ¯¯¯F2.

We consider X=Pn¯¯¯F2. In this case, the connectedness of the Hilbert scheme for a fixed Hilbert polynomial P was established by Hartshorne [2]. Note first that given a homogenized polynomial ϕ, one might consider the closed subscheme

so that each polynomial equation and hence a polynomial system identifies a closed subscheme of Pn¯¯¯F2 via the corresponding ideal. In particular, we refer to the Hilbert polynomial of an instance.

Given an instance of Π, a non-empty subset of the equations of the corresponding polynomial system is said to form a sub-instance of Π.

A sub-instance has a corresponding polynomial system induced by the polynomial equations it contains.

Two sub-instances are called disjoint if both do not belong to a single instance of Π.

A sub-problem of Π is a computational problem induced by a subset of disjoint sub-instances of Π.

Let I1 and I2 be two sub-instances of Π defined via the same variable set {xi}i∈I. I2 is said to be a variant of I1 if it can be obtained from I1 by replacing each xi in a subset of I by 1−xi in its equations followed by a permutation of the variables.

Two sub-instances of Π are said to be distinct if the following two conditions hold.

Distinct sub-instances of Π correspond to distinct points in moduli.

A simple sub-problem Λ of Π is said to be homogeneous if the following two conditions hold.

We now give a partial definition of the amplifying functor, which we denote by A. Let Λ be a homogeneous simple sub-problem of Π consisting of a set of polynomial systems {Pi}ℓi=1 defined via the variables xλ1,…,xλm. Let ϕij be the homogenized j-th polynomial in the polynomial system Pi. Define

By the connectedness of the Hilbert scheme for a fixed Hilbert polynomial, we have that there is a functor B, which is an extension of A, such that a homogeneous simple sub-problem always maps to a connected scheme via B. Thus, we extend A to B, overriding the definition of the amplifying functor.

Given a homogeneous simple sub-problem Λ of Π, and a sub-problem Λ′ of Λ induced by a subset of the instances of Λ, let τ(f):=τ(Λ,Λ′) denote the minimum number of deterministic operations required by a reduction f:Λ→Λ′, possibly with an advice string, thus simulating circuits. For a general Λ, we define τ(Λ):=τ(Λ,∅)=τ(Λ,T). We denote the number of instances of Λ by b(Λ). A sub-problem Γ of Π is called a normal sub-problem of Π if Γ=∏ri=1Λi, for some r≥1, where Λi are homogeneous simple sub-problems of Π defined via disjoint sets of variables. Over all such normal sub-problems Γ of Π, let κ(Π) denote the maximum value of ∑ri=1b(Λi).

The set of equations of a polynomial system of Γ is partitioned by those of Λi. Thus, in order to solve Γ one has to solve each Λi. ∎

Let Γ=∏ri=1Λi be a normal subproblem of Π attaining κ(Π). Since τ(Π)≥τ(Γ), it suffices to show τ(Γ)≥∑ri=1b(Λi). Furthermore, by Proposition 3.1 it suffices to show τ(Λ)≥b(Λ), where Λ=Λi for some i. We argue by induction on p:=b(Λ). The case p=1 is clear since τ(Λ)≥1. In particular, we have the following diagrams for the base case of the induction, depicting the solution of Λ in both categories.

The arrows on the left are complexity-theoretic reductions between problems, which are set-theoretic maps between instance sets. The arrows on the right are contraction morphisms. ΛU is the problem defined by the single instance Ip. β′ is the reduction from Λ to ΛU, which is the same as β on the instances of Λ′. α is the reduction from Λ to Λ′, which is the identity on the instances of Λ′. Since the instances of Λ are all distinct by definition, none of the arrows in the diagrams is the identity morphism. Given these and the induction hypothesis, we have τ(β)=τ(Λ′)≥p−1, and τ(α)≥τ(α′). If we assume τ(Λ)=τ(Λ′) so that τ(α)=0, we then get the contradiction τ(α′)=0. Thus, τ(Λ)≥τ(Λ′)+1≥p, which completes the induction and the proof. ∎

4 The Separation of P and Np

Denote by k-SAT(n,m) the problem k-SAT with n variables and m clauses.

There exist infinitely many n∈Z+ such that

We will construct by induction, a homogeneous simple sub-problem Λ of 3-SAT with 3r instances, each having 4r variables and 8r clauses, for r≥1. The result follows by the definition of κ.

We use the logical representation of the instances in our tables, but note also that an instance has a solution set over ¯¯¯F2 in algebraic form. Each instance consists of r blocks. For r=1, a block of an instance is defined on 4 variables x1,x2,x3,x4, and 8 clauses. We construct 3 instances with the solution sets over F2 consisting of the following points, listed for each instance in a separate column:

A single block for each instance is constructed with a simple algorithm best described using the truth table of the variables. Each of the 8 clauses is introduced one by one to rule out an assignment over F2 in the tables. For this purpose, we enumerate the rows of the tables for each instance by an indexing of these clauses in Table 2, Table 3, and Table 4. The solution sets over F2 are the entries left out by the introduced clauses. The solution sets over ¯¯¯F2 have the same cohomology, so that the Hilbert polynomials of the instances are the same. In particular, they are the disjoint union of two distinct closed points and an affine line as will be shown in the next paragraph.

We have thus shown that these instances form a homogeneous simple sub-problem. Assume now the induction hypothesis for some r≥1. In the inductive step, we introduce 4 new variables x4r+1,x4r+2,x4r+3,x4r+4, and 3 new blocks on these variables each consisting of 8 clauses with the exact form as in Table 1. Appending these blocks to each of the 3r instances of the induction hypothesis, we obtain 3r+1 instances. The constructed sub-problem is a simple sub-problem. We make it into a homogeneous simple sub-problem for which a sufficient condition is as follows. Given an instance, consider the graph whose nodes are the clauses of the instance, and there is an edge between two nodes if they share a common variable. We impose that this graph be connected for all the instances, which is clearly satisfied in the base case r=1. For the inductive step, replace the positive literal x4r, where it appears in the last 3 clauses of its block by the positive literal x4r+4. This operation does not change the solution set and hence the Hilbert polynomial, as x4r is already forced to be 0 for all r by the other clauses. It also ensures connectivity of the graph across all the blocks including the newly introduced one, thus constructing a homogeneous simple sub-problem, completing the induction and the proof. ∎

The definition of τ also implies

Furthermore, by the specific lower bound derived for 3-SAT:

The exponential time hypothesis [3] is true against deterministic algorithms.

Finally, this exponential lower bound implies the following by [4].