Proof schemata are infinite sequences of proofs which are defined inductively. In this paper we present a general framework for schemata of terms, formulas and unifiers and define a resolution calculus for schemata of quantifier-free formulas. The new calculus generalizes and improves former approaches to schematic deduction. As an application of the method we present a schematic refutation formalizing a proof of a weak form of the pigeon hole principle. 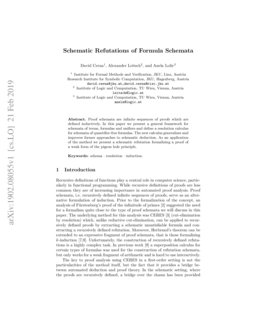 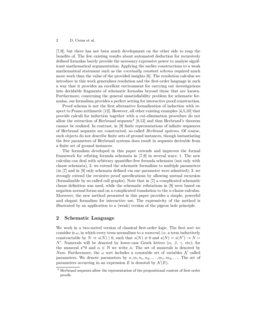 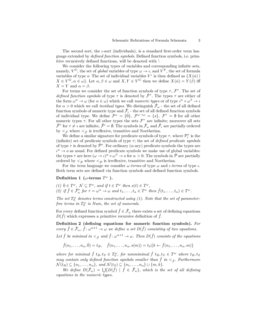 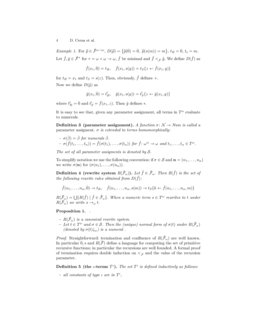 Recursive definitions of functions play a central role in computer science, particularly in functional programming. While recursive definitions of proofs are less common they are of increasing importance in automated proof analysis. Proof schemata, i.e. recursively defined infinite sequences of proofs, serve as an alternative formulation of induction. Prior to the formalization of the concept, an analysis of Fürstenberg’s proof of the infinitude of primes [2] suggested the need for a formalism quite close to the type of proof schemata we will discuss in this paper. The underlying method for this analysis was CERES [3] (cut-elimination by resolution) which, unlike reductive cut-elimination, can be applied to recursively defined proofs by extracting a schematic unsatisfiable formula and constructing a recursively defined refutation. Moreover, Herbrand’s theorem can be extended to an expressive fragment of proof schemata, that is those formalizing k-induction [7, 9]. Unfortunately, the construction of recursively defined refutations is a highly complex task. In previous work [9] a superposition calculus for certain types of formulas was used for the construction of refutation schemata, but only works for a weak fragment of arithmetic and is hard to use interactively.

The key to proof analysis using CERES in a first-order setting is not the particularities of the method itself, but the fact that it provides a bridge between automated deduction and proof theory. In the schematic setting, where the proofs are recursively defined, a bridge over the chasm has been provided  [7, 9], but there has not been much development on the other side to reap the benefits of. The few existing results about automated deduction for recursively defined formulas barely provide the necessary expressive power to analyse significant mathematical argumentation. Applying the earlier constructions to a weak mathematical statement such as the eventually constant schema required much more work than the value of the provided insights [6]. The resolution calculus we introduce in this work generalizes resolution and the first-order language in such a way that it provides an excellent environment for carrying out investigations into decidable fragments of schematic formulas beyond those that are known. Furthermore, concerning the general unsatisfiability problem for schematic formulas, our formalism provides a perfect setting for interactive proof construction.

Proof schema is not the first alternative formalization of induction with respect to Peano arithmetic [12]. However, all other existing examples [4, 5, 10] that provide calculi for induction together with a cut-elimination procedure do not allow the extraction of Herbrand sequents111Herbrand sequents allow the representation of the propositional content of first-order proofs. [8, 12] and thus Herbrand’s theorem cannot be realized. In contrast, in [9] finite representations of infinite sequences of Herbrand sequents are constructed, so-called Herbrand systems. Of course, such objects do not describe finite sets of ground instances, though instantiating the free parameters of Herbrand systems does result in sequents derivable from a finite set of ground instances.

The formalism developed in this paper extends and improves the formal framework for refuting formula schemata in [7, 9] in several ways: 1. The new calculus can deal with arbitrary quantifier-free formula schemata (not only with clause schemata), 2. we extend the schematic formalism to multiple parameters (in [7] and in [9] only schemata defined via one parameter were admitted); 3. we strongly extend the recursive proof specifications by allowing mutual recursion (formalizable by so-called call graphs). Note that in [7] a complicated schematic clause definition was used, while the schematic refutations in [9] were based on negation normal forms and on a complicated translation to the n-clause calculus. Moreover, the new method presented in this paper provides a simple, powerful and elegant formalism for interactive use. The expressivity of the method is illustrated by an application to a (weak) version of the pigeon hole principle.

We work in a two-sorted version of classical first-order logic. The first sort we consider is ω, in which every term normalizes to a numeral, i.e. a term inductively constructable by N⇒s(N) | 0, such that s(N)≠0 and s(N)=s(N′)→N=N′. Numerals will be denoted by lower-case Greek letters (α, β, γ, etc); for the numeral sα0 and α∈N we write ¯α. The set of numerals is denoted by \Num. Furthermore, the ω sort includes a countable set of variables N called parameters. We denote parameters by n,m,n1,n2,…,m1,m2,…. The set of parameters occurring in an expression E is denoted by \Ncal(E).

The set Tω0 denotes terms constructed using (1). Note that the set of parameter-free terms in Tω0 is \Num, the set of numerals.

For every defined function symbol \fhat∈\Fcalhatω there exists a set of defining equations D(\fhat) which expresses a primitive recursive definition of \fhat.

We define D(\Fcalhatω)=\Union{D(\fhat)∣\fhat∈\Fcalhatω}, which is the set of all defining equations in the numeric types.

It is easy to see that, given any parameter assignment, all terms in Tω evaluate to numerals.

A function σ:\Ncal→\Num is called a parameter assigment. σ is extended to terms homomorphically:

The set of all parameter assigments is denoted by S.

Let \fhat∈\Fcalhatω. Then R(\fhat) is the set of the following rewrite rules obtained from D(\fhat):

Straightforward: termination and confluence of R(\Fcalhatω) are well known. In particular ¯0,s and R(\Fcalhat) define a language for computing the set of primitive recursive functions; in particular the recursions are well founded. A formal proof of termination requires double induction on \orderf and the value of the recursion parameter.

The set Tι is defined inductively as follows:

The set of all terms in Tι which contain no defined symbols and neither parameters nor numerals is denoted by Tι0. Tι0 is a set of “ordinary” first-order terms.

Let \fhat∈\Fcalhatι. Then R(\fhat) is the set of the following rewrite rules obtained from D(\fhat):

R(\Fcalhatι) is a canonical rewrite system.

That R(\Fcalhatι) is strongly normalizing and locally confluent can be shown in the same way as for R(\Fcalhatω).

Under a parameter assignment every term in Tι evaluates to a first-order term:

By induction on the complexity of the term definition and the fact that \toiota and \toomega are both terminating and confluent. For instance, let us consider the case σ(t0)=σ(\fhat(s1,…,sα,t1,…,tβ))\Evalι defined above. By induction σ(si)\Evalι∈Tι0 and we know from Proposition 1 that σ(tj)\Evalω are numerals. So there are t′1,…,t′α∈Tι0 and p1,…,pβ∈\Num such that σ(t0) reduces to

By induction on the value of pβ we can easily show that t′0∈Tι0.

Substitutions on term schemata need to be schematic as well, particularly when we are interested in unification. We develop some formal tools below to describe such schemata.

The following s-substitution is associated with the proof provided in Example 13, in particular the proofs mapped to δ1:

The application of an s-substitution Θ to terms in Tι is defined inductively on the complexity of term definitions as usual.

Formula schemata are defined in a way that also the number of variables in formulas can increase with the assigments of parameters. For this reason we use global variables in the definition.

We define the set \FS inductively:

where, for a \orderp-minimal \Phat FB,FS∈\FS0. If \Phat is not \orderp-minimal then FB,FS∈\FS such that for every \Qhat∈\Pcalhat occurring in FB,FS we have \Qhat\orderp\Phat. The only global variables and parameters occurring in FB are →Y and →n respectively. The only global variables in FS are →Y and besides →n FS may include a formula variable ξ and a parameter m. Like for \Fcalhatω and \Fcalhatι we define

The evaluation of a formula F∈\FS is denoted by \Evalo and is defined inductively.

If there are defined predicate symbols we proceed by induction on \orderp and the induction parameter.

If \Phat is not minimal the base case for \Phat involves only smaller defined predicate symbols. So by induction on \orderp we get the desired result.

Let a be a constant symbol of type ι, P∈\Pcalι×ι→o, \fhat as in Example 3, \Phat∈\Pcalhatτ for τ=ι×ω→o, and \Qhat∈\Pcalhatτ′ for τ′=ι×ω×ω→o. Concerning the ordering we have \Phat\orderp\Qhat. The defining equations for \Phat and \Qhat are:

Let us consider the schematic formula representation of the 1-Strict Monotone Assertion (1-SMA), a weak variant of the Infinitary Pigeonhole Principle (IPP). Mathematically, the concept of Strict monotonicity can be understood as follows:

Notice that for a function from f:N→Q, this concept is non-trivial, however restricting our range to N results in a trivial but combinatorially complex statement, namely, the following:

1-SMA is closely related to the eventually constant schema (ECS) discussed in [6]. However, 1-SMA uses a weaker cut (Σ2 vs. Δ2) which paradoxically makes construction of a finite representation harder, i.e. mutual proof calls are necessary within the finite representation. Formalizations of the ECS222 Using the current release, execute the following to construct the proof for n=2:       import gapt.examples.EventuallyConstantSchema       import gapt.examples.EventuallyConstantSchema.ctx       val proof = instantiateProof.Instantiate( le"omega (s (s 0)) " )       prooftool(proof) and the 1-SMA333 Same as in Footnote 2 but with the following imports:       import gapt.examples.OneStrictMonotoneSchema       import gapt.examples.OneStrictMonotoneSchema.ctx can be found within the GAPT system444https://www.logic.at/gapt/. An NNF formula representing the cut structure of an instance proof can also be extracted555After executing the commands of Footnote 3, following commands extract an instance of the characteristic NNF formula (the running example in this work):      val str = StructCreators.extract( proof )( ctx )      val csf = Sequent(Seq(CharFormN(str)),Seq())      prooftool(csf).