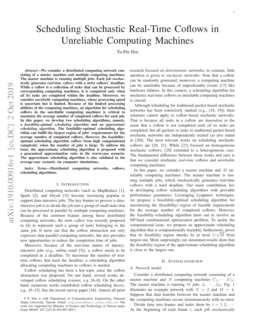 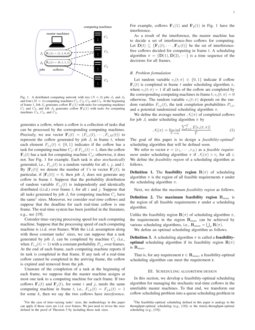 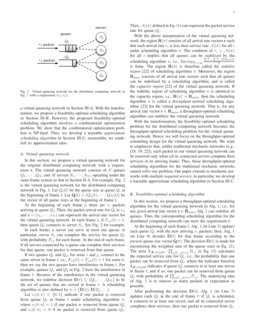 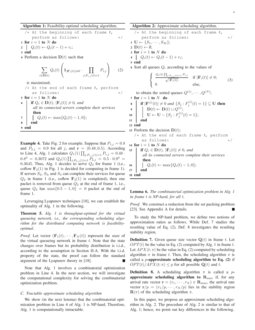 We study the online scheduling problem where the machines need to be cal...
Zuzhi Chen, et al. ∙

Malleable scheduling is a model that captures the possibility of paralle...
Dimitris Fotakis, et al. ∙

The speed-robust scheduling problem is a two-stage problem where given m...
Franziska Eberle, et al. ∙

In high-multiplicity scheduling, jobs of the same size are encoded in an...
Hauke Brinkop, et al. ∙

Scheduling a set of jobs over a collection of machines is a fundamental ...
Janardhan Kulkarni, et al. ∙

Distributed computing networks (such as MapReduce [6], Spark [25], and Dryad [11]) become increasing popular to support data-intensive jobs. The key feature to process a data-intensive job is to divide the job into a group of small tasks that can be processed in parallel by multiple computing machines. Because of the common feature among those distributed computing networks, the term coflow was recently proposed in [3] to represent such a group of tasks belonging to the same job. It turns out that the coflow abstraction not only expresses data-parallel computing networks, but also provides new opportunities to reduce the completion time of jobs.

Moreover, because of the real-time nature of latency-intensive jobs (e.g., online retail [23]), a coflow needs to be completed in a deadline. To maximize the number of real-time coflows that meet the deadline, a scheduling algorithm allocating computing machines to coflows is needed.

Coflow scheduling has been a hot topic since the coflow abstraction was proposed. On one hand, several works developed coflow scheduling systems, e.g. [4, 5, 17]. On the other hand, numerous works established coflow scheduling theory, e.g., [14, 19, 2, 22, 16, 20, 10]. See the recent survey paper [21]. Almost all prior research focused on deterministic networks; in contrast, little attention is given to stochastic networks. Note that a coflow can be randomly generated; moreover, a computing machine can be unreliable because of unpredictable events [1] like hardware failures. In this context, a scheduling algorithm for stochastic real-time coflows in unreliable computing machines is crucial.

In this paper, we consider a master machine and M

1/√M from largest one. More surprisingly, our simulation results show that the feasibility region of the approximate scheduling algorithm is close to the largest one.

Divide time into frames and index them by t=1,2,⋯. At the beginning of each frame t, each job stochastically

generates a coflow, where a coflow is a collection of tasks that can be processed by the corresponding computing machines. Precisely, we use vector

is a random variable for all

. Suppose that the probability distribution of random variable

Fi,j(t) is independently and identically distributed (i.i.d.) over frame t, for all i and j. Suppose that all tasks generated by job Ji for computing machine Cj have the same111For the case of time-varying tasks’ sizes, the methodology in this paper can apply if those sizes are i.i.d. over frames. We just need to revise the state defined in the proof of Theorem 5 by including those task sizes. sizes. Moreover, we consider real-time coflows and suppose that the deadline for each real-time coflow is one frame. The real-time system has been justified in the literature, e.g., see [9].

Unaware of the completion of a task at the beginning of each frame, we suppose that the master machine assigns at most one task to a computing machine for each frame. If two coflows Fi(t) and Fj(t), for some i and j, needs the same computing machine in frame t, i.e., Fi,k(t)=Fj,k(t)=1 for some k, then we say the two coflows have interference. For example, coflows F1(1) and F2(1) in Fig. 1 have the interference.

Next, we define the maximum feasibility region as follows.

The maximum feasibility region Rmax is the region of all feasible requirements r under a scheduling algorithm.

We define an optimal scheduling algorithm as follows.

At the beginning of each frame t, there are ri packets arriving at queue Qi. Then, the packet arrival rate for Qi is ri, and r=(r1,⋯,rN) can represent the arrival rate vector for the virtual queueing network. In each frame t, if Fi,j(t)=1, then queue Qi connects to server Sj. See Fig. 2 for example.

At the beginning of each frame t, Alg. 1 (in Line 1) updates each queue Qi with the new arriving ri packets; then, Alg. 1 (in Line 1) decides D(t) for that frame according to the present queue size vector Q(t). The decision D(t) is made for maximizing the weighted sum of the queue sizes in Eq. (2). The term 1|Fi(t)|≠0⋅∏j:Fi,j(t)=1Pi,j in Eq. (2) calculates the expected service rate for Qi, i.e., the probability that one packet can be removed from Qi, where the indicator function 1|Fi(t)|≠0 indicates if queue Qi connects to at least one server in frame t, and if so, one packet can be removed from queue Qi with probability of ∏j:Fi,j(t)=1Pi,j. The underlying idea of Alg. 1 is to remove as many packets in expectation as possible.

After performing the decision D(t), Alg. 1 (in Line 1) updates each Qi at the end of frame t: if Qi is scheduled, it connects to at least one server, and all its connected server completes their services, then one packet is removed from Qi.

Leveraging Lyapunov techniques [18], we can establish the optimality of Alg. 1 in the following.

Alg. 1 is throughput-optimal for the virtual queueing network, i.e., the corresponding scheduling algorithm for the distributed computing network is feasibility-optimal.

Let vector (F1(t),⋯,FN(t)) represent the state of the virtual queueing network in frame t. Note that the state changes over frames but its probability distribution is i.i.d., according to the assumption in Section II-A. With the i.i.d. property of the state, the proof can follow the standard argument of the Lyapunov theory in [18]. ∎

We show (in the next lemma) that the combinatorial optimization problem in Line 1 of Alg. 1 is NP-hard. Therefore, Alg. 1 is computationally intractable.

The combinatorial optimization problem in Alg. 1 in frame t is NP-hard, for all t.

We construct a reduction from the set packing problem [8]. See Appendix A for details. ∎

To study the NP-hard problem, we define two notions of approximation ratios as follows. While Def. 7 studies the resulting value of Eq. (2), Def. 8 investigates the resulting stability region.

In this paper, we propose an approximate scheduling algorithm in Alg. 2. The procedure of Alg. 2 is similar to that of Alg. 1; hence, we point out key differences in the following.

The underlying idea of Alg. 2 is to include a queue, in Q(1),⋯,Q(N) order, to the decision set if that queue does not cause interference. Precisely, Alg. 2 uses a set U to record (in Line 2) available servers that are not allocated yet, where set U is initialized to be {S1,⋯,SM} in Line 2. Then, at the i-th iteration of Line 2, Alg. 2 checks if queue Q(i) satisfies the two conditions in Line 2: the first condition |F(i)(t)|≠0 means that Qi connects to at least one server and the second condition {Sj:F(i)j(t)=1}⊆U means that its connected servers are all available. If Q(i) meets the conditions, then it is scheduled as in Line 2. In addition, if Q(i) is scheduled, then set U is updated as in Line 2 by removing the servers allocated to queue Q(i). After deciding D(t), Alg. 2 performs the decision D(t) in Line 2 for frame t, followed by updating the queue sizes in Line 2.

Next, we establish the approximation ratio of Alg. 2 to Eq. (2).

With Lemma 10, we can further establish the approximation ratio of Alg. 2 to Rmax.

Alg. 2 is a √M-approximate scheduling algorithm to Rmax.

The computational complexity of Alg. 2 is O(logN) primarily caused by sorting all queues in Line 2. Thus, Alg. 2 is tractable when the number of jobs is large.

Second, we consider more jobs and more computing machines with the same quantities, i.e., N=M. Moreover, all task completion probabilities are fixed to be 0.9, i.e., Pi,j=0.9 for all i and j. Then, Fig. 5 displays the maximum requirements that can be achieved by Alg. 2, when all task generation probabilities are the same. From Fig. 5, the maximum achievable requirement by Alg. 2 appears to decrease super-linearly with the number of computing machines.

In this paper, we provided a framework for studying real-time coflows in unreliable computing machines. In particular, we developed two algorithms for scheduling coflows in shared computing machines. While the proposed feasibility-optimal scheduling algorithm can support the largest region of jobs’ requirements, it has the notorious NP-hard issue. In contrast, the proposed approximate scheduling algorithm is not only simple, but also has a provable guarantee for the achievable requirement region. Moreover, we note that coding techniques have been exploited to alleviate stragglers in distributed computing networks, e.g., [12, 24]. Thus, including coding design into our framework is promising.

Appendix A Proof of Lemma 6

We show a reduction from the set packing problem [8], where given a collection {Ψ1,⋯,Ψn} of non-empty sets over a universal set {1,2,⋯,m} for some positive integers m and n, the objective is to identify a sub-collection of disjoint sets in that collection such that the number of sets in the sub-collection is maximized.

For the given instance of the set packing problem, we construct n queues and m servers in the virtual queueing network. Consider a fixed frame t. In frame t, for each element e∈Ψi we connect queue Qi to server Se. With the transformation, the set packing problem is equivalent to identifying a set of interference-free queues in frame t such that number of queues in that set is maximized.

Moreover, consider no connection between the queues and the servers until frame t−1, identical arrival rates ri=r for all i, and identical task completion probabilities Pi,j=1 for all i and j. In this context, Eq. (2) in frame t becomes

because Qi(t)=r⋅t, 1|Fi(t)|≠0=1 (due to non-empty sets Ψi for all i), and ∏j:Fi,j(t)=1Pi,j=1. As a result of the constant r⋅t in Eq. (4), the objective of the combinatorial optimization problem in Alg. 1 in frame t becomes identifying a set D(t) of interference-free queues such that the number of queues in that set is maximized.

Because the above argument is true for all frames t, we conclude that the combinatorial optimization problem in Alg. 1 in frame t is NP-hard, for all t.

Appendix B Proof of Lemma 10

where OPTi=∑k:Qk∈CiVk for all i.

Furthermore, we can bound OPTi for each i by

Then, we can bound OPT(t) by

The proof of Theorem 12 needs the following technical lemma, whose proof follows the line of [18] along with the i.i.d. property of state (F1(t),⋯,FN(t)) (as discussed in the proof of Theorem 5) and the constant task completion probabilities Pi,j.

Given arrival rate vector r, if there exist constants B>0 and ϵ>0 such that