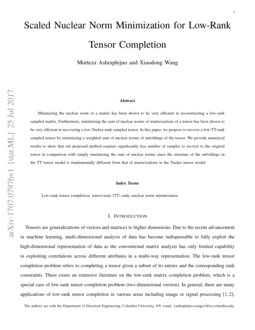 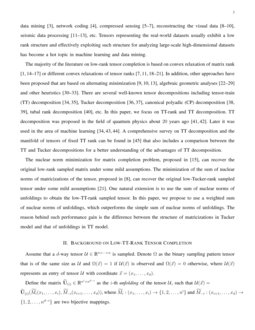 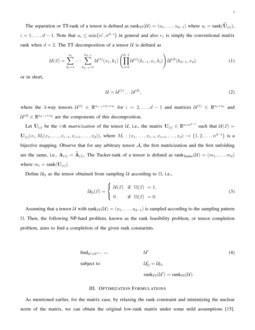 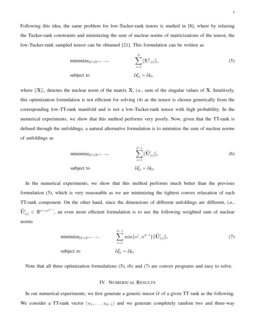 Assume that a d-way tensor U∈Rn×⋯×n is sampled. Denote Ω as the binary sampling pattern tensor that is of the same size as U and Ω(→x)=1 if U(→x) is observed and Ω(→x)=0 otherwise, where U(→x) represents an entry of tensor U with coordinate →x=(x1,…,xd).

The separation or TT-rank of a tensor is defined as rankTT(U)=(u1,…,ud−1) where ui=rank(˜U(i)), i=1,…,d−1. Note that ui≤min{ni,nd−i} in general and also r1 is simply the conventional matrix rank when d=2. The TT decomposition of a tensor U is defined as

Define UΩ as the tensor obtained from sampling U according to Ω, i.e.,

Assuming that a tensor U with rankTT(U)=(u1,…,ud−1) is sampled according to the sampling pattern Ω. Then, the following NP-hard problem, known as the rank feasibility problem, or tensor completion problem, aims to find a completion of the given rank constarints.

As mentioned earlier, for the matrix case, by relaxing the rank constraint and minimizing the nuclear norm of the matrix, we can obtain the original low-rank matrix under some mild assumptions [15]. Following this idea, the same problem for low-Tucker-rank tenors is studied in [8], where by relaxing the Tucker-rank constraints and minimizing the sum of nuclear norms of matricizations of the tensor, the low-Tucker-rank sampled tensor can be obtained [21]. This formulation can be written as

where ∥X∥∗ denotes the nuclear norm of the matrix X

, i.e., sum of the singular values of

X. Intuitively, this optimization formulation is not efficient for solving (4

) as the tensor is chosen generically from the corresponding low-TT-rank manifold and is not a low-Tucker-rank tensor with high probability. In the numerical experiments, we show that this method performs very poorly. Now, given that the TT-rank is defined through the unfoldings, a natural alternative formulation is to minimize the sum of nuclear norms of unfoldings as

In the numerical experiments, we show that this method performs much better than the previous formulation (5), which is very reasonable as we are minimizing the tightest convex relaxation of each TT-rank component. On the other hand, since the dimensions of different unfoldings are different, i.e., ˜U′(i)∈Rni×nd−i, an even more efficient formulation is to use the following weighted sum of nuclear norms

Note that all three optimization formulations (5), (6) and (7) are convex programs and easy to solve.

In our numerical experiments, we first generate a generic tensor U of a given TT rank as the following. We consider a TT-rank vector (u1,…,ud−1) and we generate completely random two and three-way tensor components and construct U according to (1). Hence, U is generically chosen from the manifold of tensors of TT-rank (u1,…,ud−1). Moreover, we sample the entries of the obtained tensor U independently and with some probability p.

For the first example, we construct a generic tensor U∈R4×4×4×4×4 of TT-rank (1,4,2,2) and sample each entry with probability p. Then, we solve each one of the optimization problems (5)-(7) for the sampled tensor to reconstruct the original tensor. We define the error as ∥^U−U∥∥U∥×100%, where ^U is the obtained solution and U is the original sampled tensor. In Figure 1, we plot the errors obtained from (5), (6) and (7) in terms of the sampling probability. For this experiment, we repeated each experiment 100 times for each value of the sampling probability p and the error curves represent the average over the 100 experiments.