We propose a method for nonstationary covariance function modeling, based on the spatial deformation method of Sampson and Guttorp [1992], but using a low-rank, scalable deformation function written as a linear combination of the tensor product of B-spline basis. This approach addresses two important weaknesses in current computational aspects. First, it allows one to constrain estimated 2D deformations to be non-folding (bijective) in 2D. This requirement of the model has, up to now,been addressed only by arbitrary levels of spatial smoothing. Second, basis functions with compact support enable the application to large datasets of spatial monitoring sites of environmental data. An application to rainfall data in southeastern Brazil illustrates the method 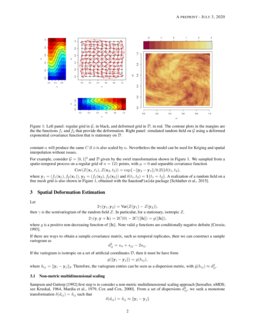 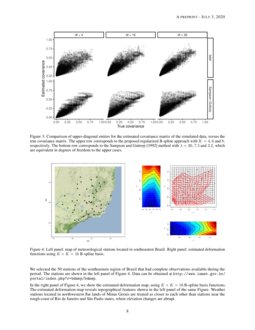 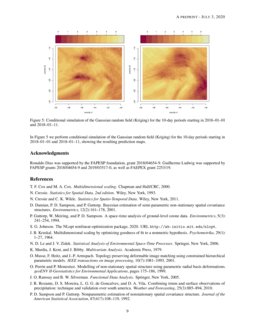 Geostatistical methods for spatial and spatio-temporal data are in great demand from fields such as earth and climate sciences, epidemiology and agriculture. A comprehensive overview can be found in cressie2011statistics. Spatially stationary processes are commonly used as models in geostatistical applications, but often the assumption of stationarity and isotropic covariance functions are difficult to hold in real applications; see for example, guttorp1994space, le2006statistical, damian2001bayesian. A recent review of methods that allow nonhomogenous covariance models is schmidt2020flexible.

We propose a semiparametric method of nonstationary spatial covariance function that expands upon the work of sampson1992nonparametric. Data observed in a set

Let Z be a Gaussian random field with spatial covariance function C. For any pair of spatial sites xi,xi′, we have Zi,t=Z(xi,t), Zi′,t=Z(xi′,t), with Cov(Zi,t,Zi′,t)=C(xi,xi′) given by

where σ2>0, and ρ is a stationary, isotropic correlation function with parameters Δ. We remark that this model may not be identifiable, since C is invariant for shifts and rigid rotations in f1, f2. Moreover, scaling f1,f2 by a constant α will produce the same C if ϕ is also scaled by α.

Nevertheless the model can be used for Kriging and spatial interpolation without issues.

For example, consider G=[0,1]2 and D given by the swirl transformation shown in Figure 1. We sampled from a spatio-temporal process on a regular grid of n=121 points, with μ=0 and separable covariance function

then γ is the semivariogram of the random field Z. In particular, for a stationary, isotropic Z,

If there are ways to obtain a sample covariance matrix, such as temporal replicates, then we can construct a sample variogram as

If the variogram is isotropic on a set of artificial coordinates D, then it must be have form

where hij=∥yi−yj∥2. Therefore, the variogram entries can be seen as a dispersion metric, with ^g(hij)≈d2ij.

sampson1992nonparametric first step is to consider a non-metric multidimensional scaling approach (hereafter, nMDS; see kruskal1964multidimensional; mardia1979multivariate; cox2000multidimensional). From a set of dispersions d2ij, we seek a monotone transformation δ(dij)=δij such that

and an artificial set of coordinates y∗i,y∗j with interpoint Euclidean distances h∗ij=∥y∗i−y∗j∥2 that minimizes the stress criterion

Here we need to impose constraints on δ such that the function g is conditionally positive definite. kruskal1964multidimensional only finds an isotonic transformation, so sampson1992nonparametric adapted the optimization algorithm as follows:

The second step in sampson1992nonparametric approach is to find an approximation for f1,f2 such that y∗1,i≈f1(xi), y∗2,i≈f2(xi). This can be done if we approximate the functions f1,f2 with, for example, thin-plate splines (wahba1980some). Thin-plate splines are the minimizers of the variational problem

The solution for a fixed λ is

We propose a different approach for the spline smoothing by making use of low rank approximation (finite approximation) for the deformation functions. Specifically, let x=(x1,x2)∈G⊂R2 and assume we have a collection of points (x11,x21),…,(x1n,x2n) be a sequence of points in G . Define a map f:G →D such that

where the functions ψk:G⊂R2→R, form a partition of unity.

Particularly, suppose that ψk are the B-splines basis functions and there is a integer number K<<n such that a map f:G →D can be represented by

To guarantee that the functions fℓ do not fold onto themselves, we must guarantee that fℓ is locally invertible and differentiable. In fact, a diffeomorphism is desirable (see, e.g., perrin1999modelling). A necessary condition is that everywhere in the G domain,

but in practice such constraint is difficult to implement, requiring the evaluation of the Jacobian J for every pair (x1,x2)∈R2. We will show in Section 4 that such condition can be translated into a condtion onto the coefficients Θℓ=(θ(ℓ)k1,k2), for ℓ=1,2. Note however that it is enough to ensure |J|>0, since a change in signs would imply a discontinuous Jacobian.

as well as the mean vector

μ are estimated by maximizing the profile log-likelihood. Without loss of generality set μ=0. Thus our proposed B-spline approach can be estimated as

We remark that the matrices W are sparse when using B-splines, therefore solutions to step 2 are scalable. To evaluate the inequality |J|>0, consider the following: write

so the determinant of the Jacobian J as a function of x1,x2 is an inner product of vec(Θ1), vec(Θ2)

, weighted by the skew-Symmetric matrix

note vec(Θ1)tA(x1,x2)vec(Θ2) is therefore proportional to

This collection of constraints, for i=1,…,K−1 and j=1,…,K−1 together imply in a non-folding deformation map, and can be enforced with constrained optimization routines. We have employed svanberg2002class constrained optimization algorithm, avaliable in the nloptr package (johnson2020nloptr). The code is available as an R package in https://github.com/guiludwig/bsplinedef.

To evaluate the performance of the algorithm, we conducted a simulation study based on the swirl function shown in Figure 1. Each sample has n=121 spatial points on a regular grid in the geographical domain G=[0,1]×[0,1]. We simulated from a Gaussian random field with mean function μ(x)=0 and covariance function C(x1,x2)=τ2+σ2e−∥y1−y2∥/ϕ, with parameters τ2=σ2=1, and ϕ=0.25. First, consider a single realization of the spatial random field. The estimated deformation maps are shown in Figure 2. We have obtained the constrained B-spline deformations (hereafter, bdef) with K×K=42,62 and 82 basis functions. The estimated deformation function does not fold, even though the true deformation function is difficult to be recovered. The case when K=8 performs better than K=4 or K=6,

indicating that there are features in the deformation map that need a large number of degrees of freedom to be estimated. On the other hand, the functions using

sampson1992nonparametric (SG) method have smoothing parameters λ=30, 7.5 and 3.2, set to match the bdef approach. They start showing folding at λ=3.2, and cannot recover deformation maps that require a number of degrees of freedom larger than 82. Note that the SG maps were stretched or shrunk to fit the plot area, but the bdef maps did not require this step.

The dataset we use to illustrate our method comes from meteorological surveys conducted by INMET – Instituto Nacional de Meteorologia, Brazil. The measurements are made at every 15 minutes, and daily accumulated values are made available. Following rozante2010combining, we grouped the rainfall data in periods of 10 days.

We selected the 50 stations of the southeastern region of Brazil that had complete observations available during the period. The stations are shown in the left panel of Figure 4. Data can be obtained at http://www.inmet.gov.br/portal/index.php?r=bdmep/bdmep.

In the right panel of Figure 4, we show the estimated deformation map, using K×K=16 B-spline basis functions. The estimated deformation map reveals topographical features shown in the left panel of the same Figure. Weather stations located in northwestern flat lands of Minas Gerais are treated as closer to each other than stations near the rough coast of Rio de Janeiro and São Paulo states, where elevation changes are abrupt.

In Figure 5 we perform conditional simulation of the Gaussian random field (Kriging) for the 10-day periods starting in 2018–01–01 and 2018–01–11, showing the resulting prediction maps.

Appendix A Derivation of the non-folding constraint

We can derive the constraint presented in Section 4 as follows: Observe that