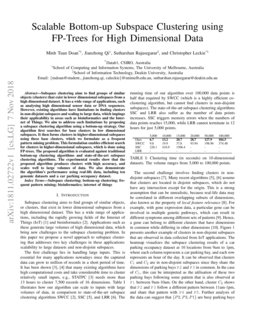 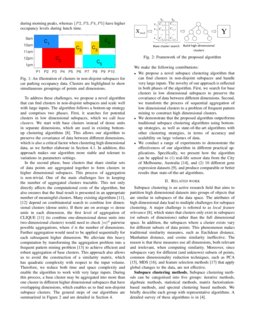 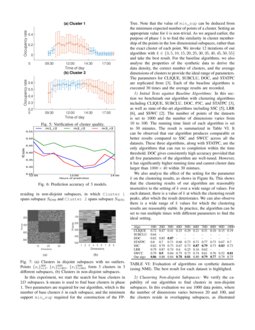 The first challenge lies in handling large inputs. This is essential for many applications nowadays since the captured data can grow to million of records in a short period of time. It has been shown [3, 4] that many existing algorithms have high computational costs and take considerable time to cluster relatively small inputs, e.g., STATPC [3] needs more than 13 hours to cluster 7,500 records of 16 dimensions. Table I illustrates how our algorithm can scale to inputs with large volumes of data, in comparison to state-of-the-art subspace clustering algorithms SWCC [2], SSC [5], and LRR [6]. The running time of our algorithm over 100,000 data points is half that required by SWCC (which is a highly efficient co-clustering algorithm, but cannot find clusters in non-disjoint subspaces). The state-of-the-art subspace clustering algorithms SSC and LRR also suffer as the number of data points increases. SSC triggers memory errors when the numbers of data points reaches 15,000, while LRR cannot terminate in 12 hours for just 5,000 points.

The second challenge involves finding clusters in non-disjoint subspaces [7]. Many recent algorithms [5, 6] assume that clusters are located in disjoint subspaces, which do not have any intersection except for the origin. This is a strong assumption that can be unrealistic, because real-life data may be correlated in different overlapping subsets of dimensions, also known as the property of local feature relevance [8]. For example, with gene expression data, a particular gene can be involved in multiple genetic pathways, which can result in different symptoms among different sets of patients [9]. Hence, a gene can belong to different clusters that have dimensions in common while differing in other dimensions [10]. Figure 1 presents another example of clusters in non-disjoint subspaces that are observed in data collected from IoT applications. The heatmap visualizes the subspace clustering results of a car parking occupancy dataset at 10 locations from 9am to 1pm, where each column represents a car parking bay, and each row represents an hour of the day. It can be observed that clusters C1 and C2 are in non-disjoint subspaces since they share the dimensions of parking bays P2 and P3 in common. In the case of C1, this can be interpreted as the utilisation of these two parking bays following some pattern that is also observed at P1 between 9am-10am. On the other hand, cluster C2 shows that P2 and P3 follow a different pattern between 11am-1pm, and share that pattern with P4 and P5. Further analysis of the data can suggest that {P2,P3,P1} are busy parking bays during morning peaks, whereas {P2,P3,P4,P5} have higher occupancy levels during lunch time.

To address these challenges, we propose a novel algorithm that can find clusters in non-disjoint subspaces and scale well with large inputs. The algorithm follows a bottom-up strategy and comprises two phases. First, it searches for potential clusters in low dimensional subspaces, which we call base clusters. We start with base clusters instead of dense units in separate dimensions, which are used in existing bottom-up clustering algorithms [8]. This allows our algorithm to preserve the covariance of data between different dimensions, which is also a critical factor when clustering high dimensional data, as we further elaborate in Section 4.1. In addition, this approach makes our algorithm more stable and tolerant to variations in parameters settings.

In the second phase, base clusters that share similar sets of data points are aggregated together to form clusters in higher dimensional subspaces. This process of aggregation is non-trivial. One of the main challenges lies in keeping the number of aggregated clusters tractable. This not only directly affects the computational costs of the algorithm, but also ensures that the final result is presented in an appropriate number of meaningful clusters. Many existing algorithms [11, 12] depend on combinatorial search to combine low dimensional clusters (dense units). If there are on average m dense units in each dimension, the first level of aggregation of CLIQUE [11] (to combine one-dimensional dense units into two-dimensional clusters) would need to check |m|d pairwise possible aggregations, where d is the number of dimensions. Further aggregation would need to be applied sequentially for each subsequent higher dimension. We alleviate this heavy computation by transforming the aggregation problem into a frequent pattern mining problem [13] to achieve efficient and robust aggregation of base clusters. This approach also allows us to avoid the construction of a similarity matrix, which has quadratic complexity with respect to the input volume. Therefore, we reduce both time and space complexity and enable the algorithm to work with very large inputs. During this process, a base cluster may be aggregated into more than one cluster in different higher dimensional subspaces that have overlapping dimensions, which enables us to find non-disjoint subspace clusters. The general steps of our algorithms are summarized in Figure 2 and are detailed in Section 4.

We make the following contributions:

, which states that clusters only exist in subspaces (or subsets of dimensions) rather than the full dimensional space. In addition, the subspaces where a cluster exists vary for different subsets of data points. This phenomenon makes traditional similarity measures, such as Euclidean distance, Manhattan distance, and cosine similarity ineffective. The reason is that these measures use all dimensions, both relevant and irrelevant, when computing similarity. Moreover, since subspaces vary for different (and unknown) subsets of points, common dimensionality reduction techniques, such as PCA

[17] that apply global changes to the data, are not effective.

Subspace clustering methods can be categorised into five groups: iterative methods, algebraic methods, statistical methods, matrix factorisation-based methods, and spectral clustering based methods. We briefly describe each group with representative algorithms. A detailed survey of these algorithms is in

iteratively alternate between assigning points to the subspaces and updating subspaces to refine the clusters. K-subspaces is simple, fast, and is guaranteed to converge. However, it needs to know the number of clusters as well as the dimensions of each cluster beforehand. The algorithm is also sensitive to outliers and only converges to a local optimum.

Statistical methods, such as MPPCA [19]

, assume that the data in each subspace follow a known distribution, such as a Gaussian distribution. The clustering process alternates between clustering the data and adjusting the subspaces by maximizing the expectation of the principle components of all subspaces. These algorithms need to know the number of clusters as well as the number of dimensions of each subspace. Moreover, their accuracy heavily depends on the initialization of the clusters and subspaces.

GPCA [20] is a representative algorithm of the algebraic methods. It considers the full data space as the union of s underlying subspaces, and hence represents the input data as a polynomial P(x) of degree s: P(x)=∏si=1b⊤ix=(b⊤1x)...(b⊤sx)=0 where bi and b⊤ix

are the normal vector and the equation of subspace

Si respectively. The subspaces are then identified by grouping the normal vectors →ni of all the points, which are the derivatives at the values xi. GPCA needs to know the number of dimensions of each subspace, and is sensitive to noise and outliers. Besides, GPCA has high computational complexity and does not scale well to the number of subspaces or their dimensionalities.

Matrix factorization based algorithms use low-rank factorization to construct the similarity matrix over the data points. Specifically, given the input N∈Rn×d containing n points in d-dimensions, matrix factorization based algorithms [21], [22] find the SVD [15] of the input to subsequently construct the similarity matrix Z, where Zij=0 if points i and j belong to different subspaces. The final clusters are obtained by thresholding the entries of Z. These methods assume the subspaces to be independent and noise free.

SSC [5] and LRR [6] are two state-of-the-art algorithms that use spectral clustering techniques. They initially express each data point xi∈N as a linear combination of the remaining data xi=Σni≠jzijxj, and use the coefficients zij to construct the similarity matrix Z∈Rn×n. The algorithms then optimize Z to make zij=0 for all points xi,xj that do not belong to the same subspace. SSC uses L1-norm regularization [23] to enforce Z to be sparse, while LRR enforces the matrix to be low-rank by using nuclear norm regularization [24]. Both algorithms assume the underlying subspaces to be disjoint. In addition, both have high computational complexity, which grows rapidly with the number of input records.

From an algorithmic point of view, clustering algorithms can be classified into bottom-up algorithms and top-down algorithms

[8]. As our algorithm follows a bottom-up strategy, we briefly discuss the relevant algorithms of this class to highlight our contributions.

Co-clustering. Another relevant topic is co-clustering (a.k.a bi-clustering or pattern-based clustering) [25]. Co-clustering can be considered as a more general class of clustering high dimensional data by simultaneously clustering rows (points) and columns (dimensions). The main point that differentiates co-clustering from subspace clustering lies in the approach to the problem, and the homogeneous methodology to find clusters in both axis-parallel and arbitrarily oriented subspaces [8]. In this paper, we also compare the performance of our algorithm on gene expression data with a range of co-clustering algorithms, including SWCC [2], BBAC-S [26], ITCC [27], FFCFW [28], and HICC [29].

We first present the notation used in this paper.

Let X={xi∈Rd:i=1..n} be a set of n points in a d-dimensional space, and Xj be a subset of X. The set of all subspace clusters is denoted as Y={CXjSi,i:1..s,j:1..c}. Here, s denotes the number of subspaces containing clusters, and c denotes the number of all clusters. More than one cluster can exist in a subspace, i.e., c≥s. Our subspace clustering algorithm finds all clusters by identifying their corresponding subspaces and point sets.

Lemma 1: Given two points x1 and x2 in subspace Si

We show that the probability P1 increases as new evidence of the cluster formation of x1 and x2 is found in other subspaces of Si. Specifically, let these two points also belong to a cluster in a certain subspace Sim⊂Si (Sim⊄S, i.e., Sim is indeed a newly discovered subspace in which x1 and x2 belong to the same cluster). The probability of them belonging to the same cluster in Si becomes:

By applying the chain rule, we can show that