Here we compare the Boltzmann-Gibbs-Shannon (standard) with the Tsallis entropy on the pattern recognition and segmentation of coloured images obtained by satellites, via "Google Earth". By segmentation we mean split an image to locate regions of interest. Here, we discriminate and define an image partition classes according to a training basis. This training basis consists of three pattern classes: aquatic, urban and vegetation regions. Our numerical experiments demonstrate that the Tsallis entropy, used as a feature vector composed of distinct entropic indexes q outperforms the standard entropy. There are several applications of our proposed methodology, once satellite images can be used to monitor migration form rural to urban regions, agricultural activities, oil spreading on the ocean etc. 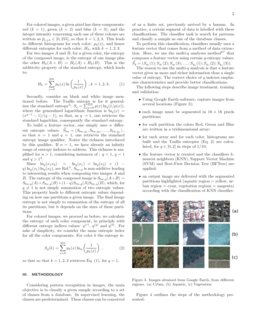 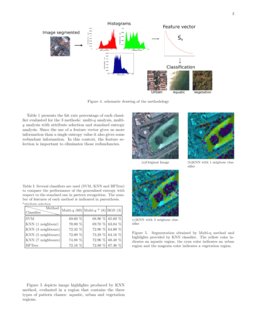 This paper studies the use of the Tsallis Entropy versus the classic Bol...
Ricardo Fabbri, et al. ∙

Effects of GIMP Retinex Filtering Evaluated by the Image Entropy

A GIMP Retinex filtering can be used for enhancing images, with good res...
A. C. Sparavigna, et al. ∙

Restart has the potential of expediting or impeding the completion times...
Iddo Eliazar, et al. ∙

Identification of Seed Cells in Multispectral Images for GrowCut Segmentation

Image pattern recognition is a common issue in medicine, biology, geography etc, in short, in domains that produce huge data in images format. Entropy, in its origins is interpreted as a disorder measure. Nevertheless, nowadays it is interpreted as the lack of information. Thus, it has been used as a methodology to measure the information content of a signal or an image. In image analysis, the greater the entropy is, the more irregular and patternless a given image is. The additive property of the standard entropy allows its use in several situations just by summing up image characteristics. Among the non-additive entropies, we study the Tsallis entropy, which has been proposed to extent the scope of application of classical statistical physics. Here, we compare the additive Boltzmann-Gibbs-Shannon (standard) Shannon (1948) and non-additive Tsallis entropy Tsallis (1988) when dealing with colored satellite images.

Firstly, consider an black and white image with Lx×Ly pixels. The integers i∈[1,Lx] and j∈[1,Ly] run along the ^x and ^y directions, respectively. Let the integer ~pi,j∈[0,255] represent the image gray levels intensity of pixel (i,j). The histograms ~p(x) of a gray levels image are obtained by counting the number of pixels with a given intensity ~pi,j.

Figure 1 shows an gray scale image and the histogram ~p(x) produced from this image:

For two images A and B, for a given color, the entropy of the composed image, is the entropy of one image plus the other Hk(A+B)=Hk(A)+Hk(B). This is the additivity property of the standard entropy, which leads to:

To build a feature vector, one simply uses n different entropic values: →Sbw=(Sbw,q1,Sbw,q2,…,Sbw,qn), so that n=1 and q=1, one retrieves the standard entropy image qualifier. Notice the richness introduced by this qualifier. If n=1, we have already an infinity range of entropy indexes to address. This richness is amplified for n>1, considering instances of : q<1, q=1 and q>1 Barbieri et al. (2011).

Since lnq(x1x2)=lnq(x1)+lnq(x2)+(1−q)lnq(x1)lnq(x2), see Ref. Borges (2004), Sbw,q is non-additive leading to interesting results when composing two images A and B. The entropy of the composed image is Sbw,q(A+B)=Sbw,q(A)+Sbw,q(B)+(1−q)Sbw,q(A)Sbw,q(B), which, for q≠1 is not simply summation of two entropic values. This property leads to different entropic values depending on how one partitions a given image. The final image entropy is not simply to summation of the entropy of all its partitions, but it depends on the sizes of these partitions.

For colored images, we proceed as before, we calculate the entropy of each color component, in principle with different entropy indices values: q(r), q(g) and q(b). For sake of simplicity, we consider the same entropic index for all the color components. For color k the entropy is:

Considering pattern recognition in images, the main objective is to classify a given sample according to a set of classes from a database. In supervised learning, the classes are predetermined. These classes can be conceived of as a finite set, previously arrived by a human. In practice, a certain segment of data is labelled with these classifications. The classifier task is search for patterns and classify a sample as one of the database classes.

The reason to use the multi-q analysis is that a feature vector gives us more and richer information than a single value of entropy. The correct choice of q indexes emphasize characteristics and provide better classifications.

Figure 4 outlines the steps of the methodology presented:

Table 1 presents the hit rate percentage of each classifier evaluated for the 3 methods: multi-q analysis, multi-q

analysis with attribute selection and standard entropy analysis. Since the use of a feature vector gives us more information than a single entropy value it also gives some redundant information. In this context, the feature selection is important to eliminates those redundancies.

Our study indicates that the Tsallis non-additive entropy can be successfully used in the construction of a feature vector, concerning coloured satellite images. This entropy generalizes the Boltzmann-Gibbs one, which can be retrieved with q=1. For q≠1

, the image retrieval success is better that the standard case (