In this work, we introduce a Self-Aware Polymorphic Architecture (SAPA) design approach to support emerging context-aware applications and mitigate the programming challenges caused by the ever-increasing complexity and heterogeneity of high performance computing systems. Through the SAPA design, we examined the salient software-hardware features of adaptive computing systems that allow for (1) the dynamic allocation of computing resources depending on program needs (e.g., the amount of parallelism in the program) and (2) automatic approximation to meet program and system goals (e.g., execution time budget, power constraints and computation resiliency) without the programming complexity of current multicore and many-core systems. The proposed adaptive computer architecture framework applies machine learning algorithms and control theory techniques to the application execution based on information collected about the system runtime performance trade-offs. It has heterogeneous reconfigurable cores with fast hardware-level migration capability, self-organizing memory structures and hierarchies, an adaptive application-aware network-on-chip, and a built-in hardware layer for dynamic, autonomous resource management. Our prototyped architecture performs extremely well on a large pool of applications. 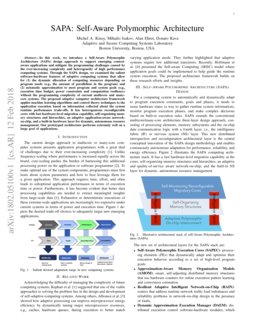 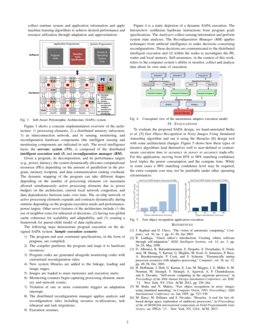 Sphinx: A Secure Architecture Based on Binary Code Diversification and Execution Obfuscation

The current design approach in multicore or many-core computer systems presents application programmers with a great deal of challenges due to their ever-increasing complexity [1]. Unlike frequency-scaling where performance is increased equally across the board, core-scaling pushes the burden of harnessing this additional processing power on the application or software programmer [2]. To make optimal use of the system components, programmers must first learn about system parameters and how to best leverage them for a given application. This approach requires time, effort, and often leads to suboptimal application performance in terms of execution time or power. Furthermore, it has become evident that better data processing capabilities are needed to extract meaningful insights from large-scale data [1]. Exhaustive or deterministic executions of these extreme-scale applications are increasingly too expensive under current systems in terms of power and execution time. Figure 1 depicts the desired trade-off choices to adequately target new emerging applications.

The new set of architectural layers for the SAPA stack are:

Figure 3 shows a concrete implementation overview of the architecture: 1) processing elements, 2) a distributed memory subsystem, 3) an interconnection network, and 4) sensing, monitoring, and reconfiguration hardware components (the intelligent sensing and monitoring components are indicated in red). The novel intelligence layer, the nervous system (NS), is composed of the distributed intelligent execution unit (I) and reconfiguration manager (RM).

Given a program, its decomposition, and its performance targets (e.g., power, latency), the system dynamically allocates computational resources (PEs) depending on the amount of parallelism in the program, memory footprint, and data communication routing overhead. The dynamic mapping of the program can take different shapes depending on the number of processing elements (or maximum allowed simultaneously active processing elements due to power budget) on the architecture, current local network congestion, and data dependencies between tasks over time. The on-chip network of active processing elements expands and contracts dynamically during runtime depending on the program execution needs and performance-power targets. Other novel features of the architecture include (1) the use of neighbor cores for rehearsal of decisions, (2) having non-global cache coherence for scalability and adaptability, and (3) creating a framework for parent-child model of data replication.

applies techniques from artificial intelligence to make decisions concerning reconfigurations. These decisions are communicated to the distributed

intelligent execution unit (I) within the nodes to reconfigure the PE, router and local memory. Self-awareness, in the context of this work, refers to the computer system’s ability to monitor, collect and analyze data about its own state of execution.

To evaluate the proposed SAPA design, we hand-annotated Betke et al. [5] Fast Object Recognition in Noisy Images Using Simulated Annealing algorithm and ran it using the Heracles [6] design tool with some architectural changes. Figure 5 shows how these types of iterative algorithms lend themselves well to user-defined or context-aware execution time to accuracy or power to accuracy trade-offs. For this application, moving from 85% to 98% matching confidence level triples the power consumption and the compute time. While in some cases a 98% matching confidence level may be required, the extra compute cost may not be justifiable under other operating circumstances.