With the growing importance of personalized recommendation, numerous recommendation models have been proposed recently. Among them, Matrix Factorization (MF) based models are the most widely used in the recommendation field due to their high performance. However, MF based models suffer from cold start problems where user-item interactions are sparse. To deal with this problem, content based recommendation models which use the auxiliary attributes of users and items have been proposed. Since these models use auxiliary attributes, they are effective in cold start settings. However, most of the proposed models are either unable to capture complex feature interactions or not properly designed to combine user-item feedback information with content information. In this paper, we propose Self-Attentive Integration Network (SAIN) which is a model that effectively combines user-item feedback information and auxiliary information for recommendation task. In SAIN, a self-attention mechanism is used in the feature-level interaction layer to effectively consider interactions between multiple features, while the information integration layer adaptively combines content and feedback information. The experimental results on two public datasets show that our model outperforms the state-of-the-art models by 2.13 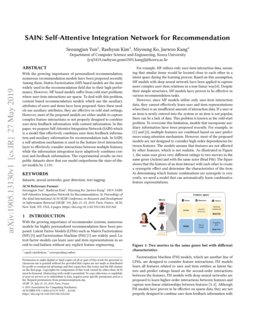 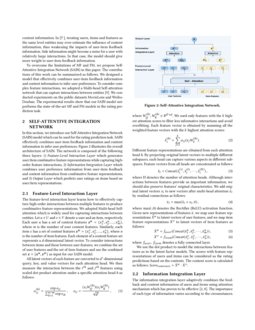 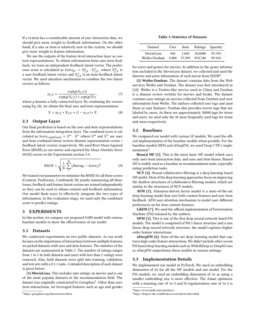 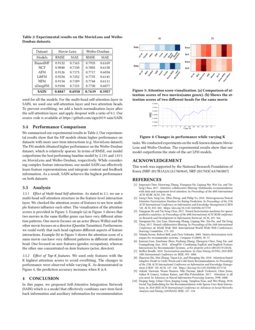 Looking at CTR Prediction Again: Is Attention All You Need?

Towards Multi-Language Recipe Personalisation and Recommendation

For example, MF utilizes only user-item interaction data, assuming that similar items would be located close to each other in a latent space during the learning process. Based on this assumption, MF models with deep neural network have been applied to capture more complex user-item relations in a non-linear way(He et al., 2017). Despite their simple structures, MF models have proven to be effective in various recommendation tasks.

However, since MF models utilize only user-item interaction data, they cannot effectively learn user and item representations when there is an insufficient amount of interaction data. If a user or an item is newly entered into the system or an item is not popular, there can be a lack of data. This problem is known as the cold-start problem. To overcome this limitation, models that incorporate auxiliary information have been proposed recently. For example, in (Chen et al., 2017) and (Chen et al., 2018), multiple features are combined based on user preferences using attention mechanism. However, most of the proposed models are not designed to consider high order dependencies between features. The models assume that features are not affected by other features, which is not realistic. As illustrated in Figure 1, the same user gives very different ratings to two movies in the same genre (Action) and with the same actor (Brad Pitt). The figure shows that the features of an item interact with each other to create a synergetic effect and determine the characteristics of the item. As determining which feature combinations are synergetic is very costly, we need a model that can automatically learn combinative feature representations.

Factorization Machine (FM) models, which are another line of LFMs, are designed to consider feature interactions. FM models learn all features related to user and item entities as latent factors and predict ratings based on the second-order interactions between the features. FM models with deep neural networks are proposed to learn higher-order interactions between features and capture non-linear relationships between features (He and Chua, 2017; Lian et al., 2018). Although FM models have proven to be effective on sparse data, they are not properly designed to combine user-item feedback information with content information. In (liu2018context)

To overcome the limitations of MF and FM, we propose Self-Attentive Integration Network (SAIN) in this paper. The contributions of this work can be summarized as follows. We designed a model that effectively combines user-item feedback information and content information to infer user preferences. To consider complex feature interactions, we adopted a Multi-head Self-attention network that can capture interactions between entities (Vaswani et al., 2017). We conducted experiments on the public datasets MovieLens and Weibo-Douban. The experimental results show that our SAIN model outperforms the state-of-the-art MF and FM models in the rating prediction task.

x={xu,xv} as input for our SAIN model.

All latent vectors of each feature are converted to d′-dimensional query, key, and value vectors for each attention head. We then measure the interaction between the ith and jth features using scaled dot-product attention under a specific attention head h as follows:

Different feature representations are obtained from each attention head h. By projecting original latent vectors to multiple different subspaces, each head can capture various aspects in different subspaces. Feature vectors from all heads are concatenated as follows:

where H denotes the number of attention heads. Although interactions between features provide us important information, we should also preserve features’ original characteristics. We add original latent vectors xi to new vectors after multi-head attention ~xi

by residual connections as follows:

We use the dot product to model the interactions between features as in the latent factor models. The scores with feature representations of users and items can be considered as the rating predictions based on the contents. The content score is calculated as follows: Scorecontents=¯Xu⋅¯Xv.

where g denotes a fully connected layer. By combining the vectors using Eq. (8), we obtain the final user and item representations.

Our final prediction is based on the user and item representations from the information integration layer. The combined score is calculated as Scorecombined=Xu⋅Xv where Xu and Xv are user and item combined latent vectors (feature representation vector + feedback latent vector), respectively. We used Root Mean Squared Error (RMSE) as our metric and reported the Mean Absolute Error (MAE) scores in the Experiments section 3.4.

We trained our parameters to minimize the RMSE for all three scores (Content, Preference, Combined). By jointly minimizing all three losses, feedback and feature latent vectors are trained independently so they can be used to obtain content and feedback information. Our model finds ways to effectively integrate the two types of information. In the evaluation stage, we used only the combined score to predict ratings.

In this section, we compare our proposed SAIN model with various baseline models to show the effectiveness of our model.

We conducted experiments on two public datasets. As our work focuses on the importance of interactions between multiple features, we picked datasets with user and item features. The statistics of the datasets are summarized in Table 1. The number of ratings ranges from 1 to 5 in both datasets and users with less than 5 ratings were removed. Also, both datasets were split into training, validation, and test sets with a 8:1:1 ratio. A detailed description of each dataset is given below:

(1) MovieLens. This includes user ratings on movies and is one of the most popular datasets in the recommendation field. The dataset was originally constructed by Grouplens111https://grouplens.org/datasets/movielens. Other than user-item interactions, we leveraged features such as age and gender for users and genres for movies. In addition to the genre information included in the MovieLens dataset, we collected and used the director and actor information of each movie from IMDB222https://www.imdb.com/interfaces/.

(2) Weibo-Douban. The dataset contains data from the Web services Weibo and Douban. The dataset was first introduced in (Yang et al., 2018). Weibo is a Twitter-like service used in China and Douban is a chinese review website for movies and books. The dataset contains user ratings on movies collected from Douban and user information from Weibo. The authors collected user tags and used them as user features. Douban also provides movie tags that are labeled by users. As there are approximately 50000 tags for items and users, we used only the 50 most frequently used tags for items and users respectively.

Biased MF (Koren et al., 2009). This is the most basic MF model which uses only user-item interaction data, and user and item biases. Biased MF is widely used as a baseline in recommendation tasks, especially rating prediction tasks.

LibFM (Rendle, 2010). We used the official implementation of Factorization Machine (FM) released by the authors.

xDeepFM (Lian et al., 2018). State-of-the-art deep learning model that captures high-order feature interactions. We didn't include other recent FM based deep learning models such as Wide&Deep or Deep&Cross as xDeepFM outperforms those models in various settings.

We summarized our experimental results in Table 2. Our experimental results show that the MF models obtain higher performance on datasets with more user-item interactions (e.g. MovieLens dataset). The FM models obtained higher performance on the Weibo-Douban dataset, which is relatively sparser. In terms of RMSE, our model outperforms the best performing baseline model by 2.13% and 1.01% on MovieLens and Weibo-Douban, respectively. While considering complex feature interactions, our model SAIN can effectively learn feature representations and integrate content and feedback information. As a result, SAIN achieves the highest performance on both datasets.

As stated in 2.1, we use a multi-head self attention structure in the feature-level interaction layer. We checked the attention scores of features to see how multiple features influence each other. The visualization of the attention scores is provided in Figure 3. Example (a) in Figure 3 shows that two movies in the same thriller genre can have very different attention patterns. One movie focuses on an actor (Bruce Willis) and the other movie focuses on a director (Quentin Tarantino). Furthermore, we could verify that each head captures different aspects of feature interactions. Example (b) in Figure 3 shows the attention score of a same movie can have very different patterns in different attention head. One focused on user features (gender, occupation), whereas the other one concentrated on item features (actor, director).

We used only features with the K highest attention scores to avoid overfitting. The changes in performance were observed while varying K. As demonstrated in Figure 4, the prediction accuracy increases when K is 8.

In this paper, we proposed Self-Attentive Integration Network (SAIN) which is a model that effectively combines user-item feedback information and auxiliary information for recommendation tasks. We conducted experiments on the well-known datasets MovieLens and Weibo-Douban. The experimental results show that our model outperforms the state-of-the-art LFM models.