This paper presents saddlepoint approximations of state-of-the-art converse and achievability bounds for noncoherent, single-antenna, Rayleigh block-fading channels. These approximations can be calculated efficiently and are shown to be accurate for SNR values as small as 0 dB, blocklengths of 168 channel uses or more, and when the channel's coherence interval is not smaller than two. It is demonstrated that the derived approximations recover both the normal approximation and the reliability function of the channel. 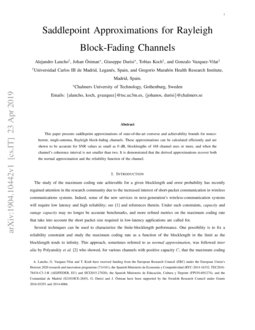 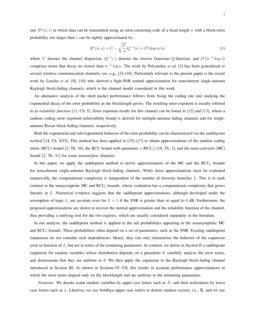 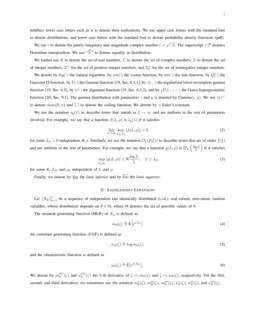 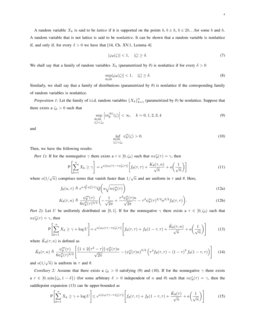 The study of the maximum coding rate achievable for a given blocklength and error probability has recently regained attention in the research community due to the increased interest of short-packet communication in wireless communications systems. Indeed, some of the new services in next-generation’s wireless-communication systems will require low latency and high reliability; see

[1] and references therein. Under such constraints, capacity and outage capacity may no longer be accurate benchmarks, and more refined metrics on the maximum coding rate that take into account the short packet size required in low-latency applications are called for.

Several techniques can be used to characterize the finite-blocklength performance. One possibility is to fix a reliability constraint and study the maximum coding rate as a function of the blocklength in the limit as the blocklength tends to infinity. This approach, sometimes referred to as normal approximation, was followed inter alia by Polyanskiy et al. [2] who showed, for various channels with positive capacity C, that the maximum coding rate R∗(n,ϵ) at which data can be transmitted using an error-correcting code of a fixed length n with a block-error probability not larger than ϵ can be tightly approximated by

where V denotes the channel dispersion, Q−1(⋅) denotes the inverse Gaussian Q-function, and O(n−1logn) comprises terms that decay no slower than n−1logn. The work by Polyanskiy et al. [2] has been generalized to several wireless communication channels; see, e.g., [3, 4, 5, 6, 7, 8, 9, 10]. Particularly relevant to the present paper is the recent work by Lancho et al. [9, 10] who derived a high-SNR normal approximation for noncoherent single-antenna Rayleigh block-fading channels, which is the channel model considered in this work.

An alternative analysis of the short packet performance follows from fixing the coding rate and studying the exponential decay of the error probability as the blocklength grows. The resulting error exponent is usually referred to as reliability function [11, Ch. 5]. Error exponent results for this channel can be found in [12] and [13], where a random coding error exponent achievability bound is derived for multiple-antenna fading channels and for single-antenna Rician block-fading channels, respectively.

Both the exponential and sub-exponential behavior of the error probability can be characterized via the saddlepoint method [14, Ch. XVI]. This method has been applied in [15, 16, 17] to obtain approximations of the random coding union (RCU) bound [2, Th. 16], the RCU bound with parameter s (RCUs) [18, Th. 1], and the meta-converse (MC) bound [2, Th. 31] for some memoryless channels.

In this paper, we apply the saddlepoint method to derive approximations of the MC and the RCUs bounds for noncoherent single-antenna Rayleigh block-fading channels. While these approximations must be evaluated numerically, the computational complexity is independent of the number of diversity branches L. This is in stark contrast to the nonasymptotic MC and RCUs bounds, whose evaluation has a computational complexity that grows linearly in L. Numerical evidence suggests that the saddlepoint approximations, although developed under the assumption of large L, are accurate even for L=1 if the SNR is greater than or equal to 0 dB. Furthermore, the proposed approximations are shown to recover the normal approximation and the reliability function of the channel, thus providing a unifying tool for the two regimes, which are usually considered separately in the literature.

In our analysis, the saddlepoint method is applied to the tail probabilities appearing in the nonasymptotic MC and RCUs bounds. These probabilities often depend on a set of parameters, such as the SNR. Existing saddlepoint expansions do not consider such dependencies. Hence, they can only characterize the behavior of the expansion error in function of L, but not in terms of the remaining parameters. In contrast, we derive in Section II

θ, carefully analyze the error terms, and demonstrate that they are uniform in θ. We then apply the expansion to the Rayleigh block-fading channel introduced in Section III. As shown in Sections IV–VII, this results in accurate performance approximations in which the error terms depend only on the blocklength and are uniform in the remaining parameters.

X, and we use boldface lower case letters such as x

We use i to denote the purely imaginary unit magnitude complex number i=√−1. The superscript (⋅)H denotes Hermitian transposition. We use “L=” to denote equality in distribution.

. The gamma distribution with parameters

z and q is denoted by Gamma(z,q). We use (x)+ to denote max{0,x} and ⌈⋅⌉ to denote the ceiling function. We denote by γ Euler’s constant.

We use the notation oξ(1) to describe terms that vanish as ξ→∞ and are uniform in the rest of parameters involved. For example, we say that a function f(L,ρ) is oρ(1) if it satisfies

for some L0>0 independent of ρ. Similarly, we use the notation Oξ(f(ξ)) to describe terms that are of order f(ξ) and are uniform in the rest of parameters. For example, we say that a function g(L,ρ) is OL(logLL) if it satisfies

Let {Xk}nk=1 be a sequence of independent and identically distributed (i.i.d.), real-valued, zero-mean, random variables, whose distribution depends on θ∈Θ, where Θ denotes the set of possible values of θ.

The moment generating function (MGF) of

Xk is defined as

the cumulant generating function (CGF) is defined as

and the characteristic function is defined as

Similarly, we shall say that a family of distributions (parametrized by θ) is nonlattice if the corresponding family of random variables is nonlattice.

Let the family of i.i.d. random variables {Xk}nk=1 (parametrized by θ) be nonlattice. Suppose that there exists a ζ0>0 such that

Then, we have the following results:

where o(1/√n) comprises terms that vanish faster than 1/√n and are uniform in τ and θ. Here,

be uniformly distributed on

where ~Kθ(τ,n) is defined as

where ^Kθ(τ) is independent of n, and is defined as

Since Xk is zero-mean by assumption, we have that mθ(ζ)≥1 by Jensen’s inequality. Together with (9), this implies that

When the nonnegative γ grows sublinearly in n, for sufficiently large n, one can always find a τ∈(−ζ0,ζ0) such that nψ′θ(τ)=γ. Indeed, it follows by (9) and Remark 1 that τ↦ψθ(τ) is an analytic function on (−ζ0,ζ0) with power series

establishes a one-to-one mapping between τ and γ, and γ/n→0 implies that τ→0. Thus, for sufficiently large n, τ is inside the region of convergence (−ζ0,ζ0).

We consider a tilted random variable Vk with distribution

where the parameter τ lies in (−ζ0,ζ0). Note that the exponential term e−ψθ(τ)+τ~γ on the right-hand side (RHS) of (21) is a normalizing factor that guarantees that ϑθ,τ is a distribution.

Let vθ,τ(ζ) denote the MGF of the tilted random variable Vk, which is given by

Note that, by (9), derivative and expected value can be swapped as long as |ζ+τ|<ζ0. This condition is, in turn, satisfied for sufficiently small ζ as long as |τ|<ζ0. Following along similar lines, one can show that

by the zero-mean normal distribution with variance

nψ′′θ(τ), denoted by Nnψ′′θ(τ), and analyze the error incurred by this substitution. To this end, we define

We next show that the error incurred by substituting Nnψ′′θ(τ) for ϑ⋆nθ,τ in (27) is small. To do so, we write

We next use [14, Sec. XVI.4, Th. 1] (stated as Lemma 3 below) to assess the error commited by replacing ϑ⋆nθ,τ by Nnψ′′θ(τ). To state Lemma 3, we first introduce the following additional notation. Let {~Xk}nk=1

be a sequence of i.i.d., real-valued, zero-mean, random variables with one-dimensional probability distribution

~Fθ that depends on an extra parameter θ∈Θ. We denote the k-th moment for any possible value of θ∈Θ by

and we denote the second moment as μ2,θ=σ2θ.

For the distribution of the normalized n-fold convolution of a sequence of i.i.d., zero-mean, unit-variance random variables, we write

Assume that the family of distributions ~Fn,θ (parametrized by θ) is nonlattice. Further assume that, for any θ∈Θ,

We next use (35) from Lemma 3 to expand (30). To this end, we first note that, as shown in Appendix B, if a family of distributions is nonlattice, then so is the corresponding family of tilted distributions. Consequently, the family of distributions ϑ⋆nθ,τ (parametrized by θ) is nonlattice since the family F⋆nθ (parametrized by θ) is nonlattice by assumption. We next note that the variable y in (30) corresponds to xσθ√n in (32). Hence, y=x√ψ′′θ(τ)n, so applying (35) to (30) with ϑ⋆nθ,τ(y)=~Fn,θ(y/√ψ′′θ(τ)n) and Nnψ′′θ(τ)(y)=N(y/√ψ′′θ(τ)n), we obtain

The proof of Part 2) follows along similar lines as the proof of Part 1). Hence, we will focus on describing what is different. Specifically, the left-hand-side (LHS) of (13) differs from the LHS of (11) by the additional term logU. To account for this difference, we can follow the same steps as Scarlett et al. [15, Appendix E]. Since in our setting the distribution of Xk depends on the parameter θ, we repeat the main steps in the following:

where the second equality follows from Fubini’s theorem [21, Ch. 2, Sec. 9.2]. We next proceed as in the proof of the previous part. The first term in (38) coincides with (27). We next focus on the second term, namely,

We substitute in (39) the distribution ϑ⋆nθ,τ by the zero-mean normal distribution with variance nψ′′θ(τ), denoted by Nnψ′′θ(τ), which yields