RSL19BD at DBDC4: Ensemble of Decision Tree-based and LSTM-based Models 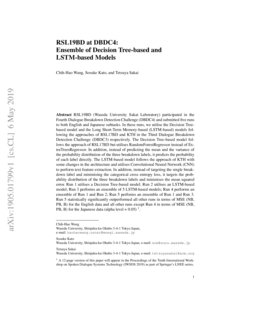 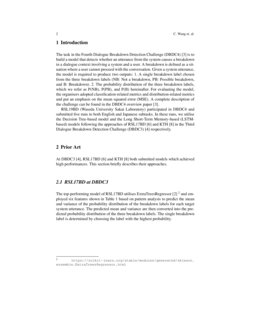 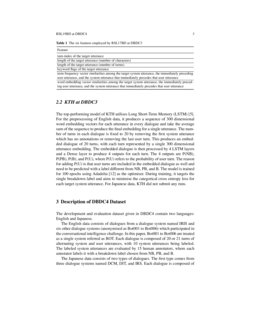 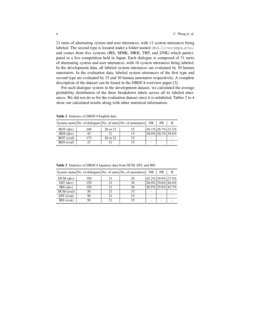 The task in the Fourth Dialogue Breakdown Detection Challenge (DBDC4) DBDC4 is to build a model that detects whether an utterance from the system causes a breakdown in a dialogue context involving a system and a user. A breakdown is defined as a situation where the user cannot proceed with the conversation. Given a system utterance, the model is required to produce two outputs: 1. A single breakdown label chosen from the three breakdown labels (NB: Not a breakdown, PB: Possible breakdown, and B: Breakdown). 2. The probability distribution of the three breakdown labels, which we refer as P(NB), P(PB), and P(B) hereinafter. For evaluating the model, the organisers adopted classification-related metrics and distribution-related metrics and put an emphasis on the mean squared error (MSE). A complete description of the challenge can be found in the DBDC4 overview paper DBDC4 .

RSL19BD (Waseda University Sakai Laboratory) participated in DBDC4 and submitted five runs to both English and Japanese subtasks. In these runs, we utilise the Decision Tree-based model and the Long Short-Term Memory-based (LSTM-based) model following the approaches of RSL17BD RSL17BD and KTH KTH in the Third Dialogue Breakdown Detection Challenge (DBDC3) DBDC3 respectively.

The top-performing model of RSL17BD utilises ExtraTreesRegressor extratree  222https://scikit-learn.org/stable/modules/generated/sklearn.ensemble.ExtraTreesRegressor.html and employed six features shown in Table 1 based on pattern analysis to predict the mean and variance of the probability distribution of the breakdown labels for each target system utterance. The predicted mean and variance are then converted into the predicted probability distribution of the three breakdown labels. The single breakdown label is determined by choosing the label with the highest probability.

. For the preprocessing of English data, it produces a sequence of 300 dimensional word embedding vectors for each utterance in every dialogue and take the average sum of the sequence to produce the final embedding for a single utterance. The number of turns in each dialogue is fixed to 20 by removing the first system utterance which has no annotations or removing the last user turn. This produces an embedded dialogue of 20 turns, with each turn represented by a single 300 dimensional utterance embedding. The embedded dialogue is then processed by 4 LSTM layers and a Dense layer to produce 4 outputs for each turn. The 4 outputs are P(NB), P(PB), P(B), and P(U), where P(U) refers to the probability of user turn. The reason for adding P(U) is that user turns are included in the embedded dialogue as well and need to be predicted with a label different from NB, PB, and B. The model is trained for 100 epochs using Adadelta

adadelta as its optimiser. During training, it targets the single breakdown label and aims to minimise the categorical cross entropy loss for each target system utterance. For Japanese data, KTH did not submit any runs.

The development and evaluation dataset given in DBDC4 contain two languages: English and Japanese.

The English data consists of dialogues from a dialogue system named IRIS and six other dialogue systems (anonymised as Bot001 to Bot006) which participated in the conversational intelligence challenge. In this paper, Bot001 to Bot006 are treated as a single system referred as BOT. Each dialogue is composed of 20 or 21 turns of alternating system and user utterances, with 10 system utterances being labeled. The labeled system utterances are evaluated by 15 human annotators, where each annotator labels it with a breakdown label chosen from NB, PB, and B.

For each dialogue system in the development dataset, we calculated the average probability distribution of the three breakdown labels across all its labeled utterances. We did not do so for the evaluation dataset since it is unlabeled. Tables 4, 3 and 2 show our calculated results along with other statistical information.

The modifications above are decided by training and evaluating different model configurations using the English 444When training and evaluating a model using the English data from DBDC3, we used the revised data mentioned in the DBDC3 overview paper DBDC3 . and Japanese data from DBDC3 555Due to the late release of dataset for DBDC4, we first built our models using the dataset from DBDC3.. The evaluation results are shown in Tables 6 and 5. DT means the model utilises decision trees, EX10

means the model utilises ExtraTreesRegressor with 10 estimators, and

RF100 means the model utilises RandomForestRegressor with 100 estimators. AV means the model predicts the mean and the variance of the probability distribution, and NBPBB

DT-RF100-NBPBB outperformed the model submitted by RSL17BD in DBDC3 (DT-EX10-AV) in all evaluation metrics in both English and Japanese data. Thus, we chose to utilise the configuration of DT-RF100-NBPBB when submitting the model for Run 1.

Following the approach of KTH KTH at DBDC3 DBDC3 , we utilise Long Short-Term Memory (LSTM) LSTM . However, instead of taking the average sum of word embedding vectors for each utterance, we utilise Convolutional Neural Networks (CNN) to perform text feature extraction and produce the final embedded utterance. In addition, instead of targeting the single breakdown label and minimising the categorical cross entropy loss for each target system utterance, our model targets the probability distribution of the three breakdown labels and minimises its mean squared error. We chose Adam adam

as our optimiser and mean squared error as our loss function.

Fig. 1 shows the architecture diagram of our model.

For the preprocessing of both English and Japanese data, we first follow the same approach as RSL17BD at DBDC3 to produce a sequence of 300 dimensional word embedding vectors for each utterance in every dialogue. The number of word vectors in each sequence is fixed to v, with v set to 50. This is done by truncating sequences that are longer than v

and padding sequences that are shorter than

The process above produces a dialogue of 2n turns, with each turn represented by a sequence of v

for each sequence to produce an embedded dialogue. The 1D CNN layer uses 150 filters of size 2 with ReLU

as the activation function. The dropout rate of the Dropout layer is set to 0.4.

The embedded dialogue is then processed by 4 LSTM layers sequentially. Each LSTM layer contains 64 units, with dropout set to 0.1, and recurrent dropout set to 0.1. We used LSTM instead of Bi-LSTM because the usage of turns after the target system utterance is disallowed. The output sequences from the 4 LSTM layers are concatenated to form a (2n, 256) dimensional matrix, and processed by a Dense layer with softmax activation and 4 outputs. The 4 outputs represent P(NB), P(PB), P(B), and P(U) respectively. The probability distribution for each target system utterance is calculated by normalising P(NB), P(PB), and P(B) by their sum. The single breakdown label is determined by choosing the label with the highest probability in the distribution.

The way an ensemble of 5 LSTM-based models is built is described as follows: Given training data Dt and evaluation data De, we randomly divide Dt into 10 portions and sample 5 portions from it. We build 5 models, where each model is trained using one of the sampled portions as validation data and the rest of the development data as training data. The batch size is set to 32. Each model is saved when the validation loss is minimum and no overfitting occurred. We make predictions on De using each model, and take the mean of the predicted probability distribution for each target system utterance from the 5 models to produce a new probability distribution. The new single breakdown label is determined by choosing the label with the highest probability in the new probability distribution.

This run is identical with Run 4 except that Run 2 is replaced by Run 3.

Nevertheless, the above strategy is rather naive as it does not consider the overall probability distribution of the three breakdown labels for each dialogue system. As shown in Tables 4, 3 and 2, the average probability distribution of each dialogue system is different from one another. In particular, the system IRS in Table 4 has a significantly higher probability for label B compared to the other four systems. We believe that IRS should not have been combined with the other four systems to create training data Jt2. Furthermore, the model which is trained with Jt2 should not have been used for predicting the data of IRS in Je2.

Table 17 shows the official results of MSE (NB, PB, B) for Je2. It can be observed that due to the naive strategy above, all runs achieved poor performance with regard to IRS. To improve the result, we believe that the development data of IRS should be excluded from Jt2 and combined with Jt1. When predicting the labels for IRS in Je2, we should utilise the model trained with Jt1 instead of the one trained with Jt2. This proposed strategy requires us to either fix all training data to 30 turns in the LSTM-based model or develop a new model which accepts a shorter fixed turn length such as 5.

We analysed our runs in terms of MSE (NB, PB, B) (referred as MSE in this section), which is the emphasised evaluation metric in this challenge. From Tables 14 and 13, it can be observed that Run 4 outperformed Run 1 and Run 2, and Run 5 outperformed Run 1 and Run 3 in terms of MSE for both English and Japanese data. To investigate how well the ensemble actually worked for each utterance, we would like to know the number of target system utterances for which the ensemble model outperformed the original models that were ensembled. In this section, we focus on Run 5 which achieved the best performance in terms of MSE and compare its results with Run 1 and Run 3 666When comparing the runs in section 7.2, we remove the first predicted system utterance of every dialogue in Japanese data. This is because the first system utterances in Japanese data are all annotated with the same labels (NB) and are all predicted correctly with MSE = 0.0 by every run..

From Tables 19 and 18, it can be observed that the number of target system utterances for which Run 5 outperformed the other runs is relatively small. We plotted the relationship of the differences between the MSE of Run 1, Run 3, and Run 5 in Figs. 3 and 2. The x-axis is mse1(v)−mse5(v), and the y-axis is mse3(v)−mse5(v). The points coloured in blue, orange, and green denote the target system utterances that match the condition of V1<3,5, V3<1,5, and V5<1,3 respectively.

By observing Figs. 3 and 2, it appears that the condition which makes the MSE of Run 5 lower than the ones of Run 1 and Run 3 is that the target system utterance is located in the first quadrant of Figs. 3 and 2.

From Figs. 7 and 6, it can be observed that the MSE of Run 1 and Run 3 tend to be similar when max{p∗(NB),p∗(B)} is low. This means that the ensemble model tends to perform the best in target system utterances which are not labeled with high probability of NB or B. Therefore, to further improve our ensemble model, we should either develop a new ensemble strategy different from simple averaging or include a third model which focuses on minimising the MSE in target system utterances that are labeled with high probability of NB or B.

Our future work includes utilising a proposed strategy in creating the training data and improving our ensemble model. The proposed strategy considers the overall probability distribution of the three breakdown labels for each dialogue systems and requires us to either fix all training data to 30 turns in the LSTM-based model or develop a new model which accepts a shorter fixed turn length such as 5. To improve our ensemble model, we should either develop a new ensemble strategy different from simple averaging or include a third model which focuses on minimising the MSE in target system utterances that are labeled with high probability of NB or B.